This marked another milestone on Brentford’s impressive journey, as they held on to record their first Premier League away win courtesy of first-half goals by Ivan Toney and Bryan Mbeumo before Shandon Baptiste was sent off. Toney, who would have joined Wolves as a teenager but for failing a medical, led the way from the penalty spot before Mbeumo, who clattered the crossbar with a minute of normal time to play, converted the striker’s cross.

Wolves eventually garnered their first goals of the season in victory at Watford last weekend but the swell of groans in the Wolves crowd as Romain Saïss’s ambitious hit-and-hope volley sailed over from 35 yards summed up a frustrating first half, as did the home support beckoning their goalkeeper José Sá to take aim from halfway seconds before the interval. Wolves were full of hot air in the final third and failed to muster a shot on target, Raúl Jiménez heading over an Adama Traoré cross with a couple of minutes to play. 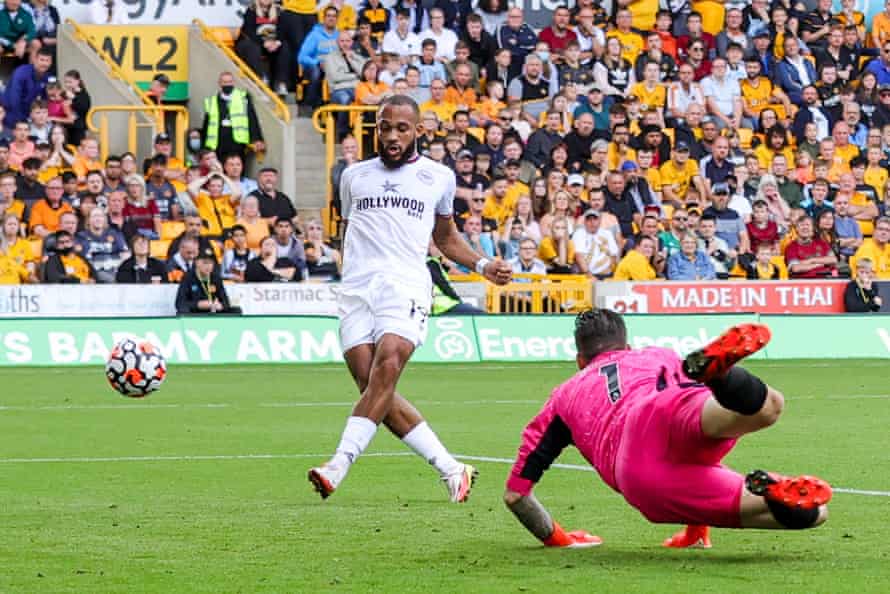 It was no surprise that Bruno Lage called on Hwang Hee-chan, who scored on debut in victory last weekend, at half-time, switching to a back four in the process and the striker would surely have hit the target midway through the second half but for the stealth of Kristoffer Ajer. The Brentford defender celebrated his goal-saving intervention, when he snaffled the ball as the striker shaped to pull the trigger.

But the second half was only 18 seconds old when Mbeumo wasted a chance to increase Brentford’s advantage, curling wide after Vitaly Janelt robbed the ball from Ruben Neves, who came deep to collect off his goalkeeper on the edge of the box. Neves struggled alongside João Moutinho, the Wolves pair often overwhelmed by Brentford’s slick three-man midfield operation, marshalled by Christian Nørgaard, and Jiménez’s most memorable contribution came in the way of a failed first-half rabona. Wolves attacked in vain after Baptiste was sent off for picking up a silly second yellow.

Toney had a goal disallowed after nine minutes because Mbeumo was offside in the buildup but opened the scoring from the penalty spot in typically nerveless fashion. The referee Darren England spotted Marcal manhandle Toney at a Brentford corner and the striker strutted forward to send Sá the wrong way, despite the goalkeeper doing his best to put off Toney, scuffing the spot as the referee emptied the box.

Toney had the ball in the net again a couple of minutes later, backheeling in after Sá superbly denied Janelt only to be penalised by the video assistant referee Stuart Attwell for handball. But Brentford were ravenous and deservedly doubled their lead when Toney stormed down left flank, overpowering Max Kilman before squaring the ball for Mbuemo, lurking unmarked at the back post, to turn the ball home.

Prove your Covid status if you want to party, UK students told | Students