THOMAS TUCHEL has condemned the Chelsea fans who chanted for Roman Abramovich during a minute’s applause for Ukraine at Turf Moor.

Prem bosses arranged shows of solidarity before each game — including an ovation ahead of kick-off yesterday.

Fans at Turf Moor applaud in support of the victims of the invasion of UkraineCredit: AFP 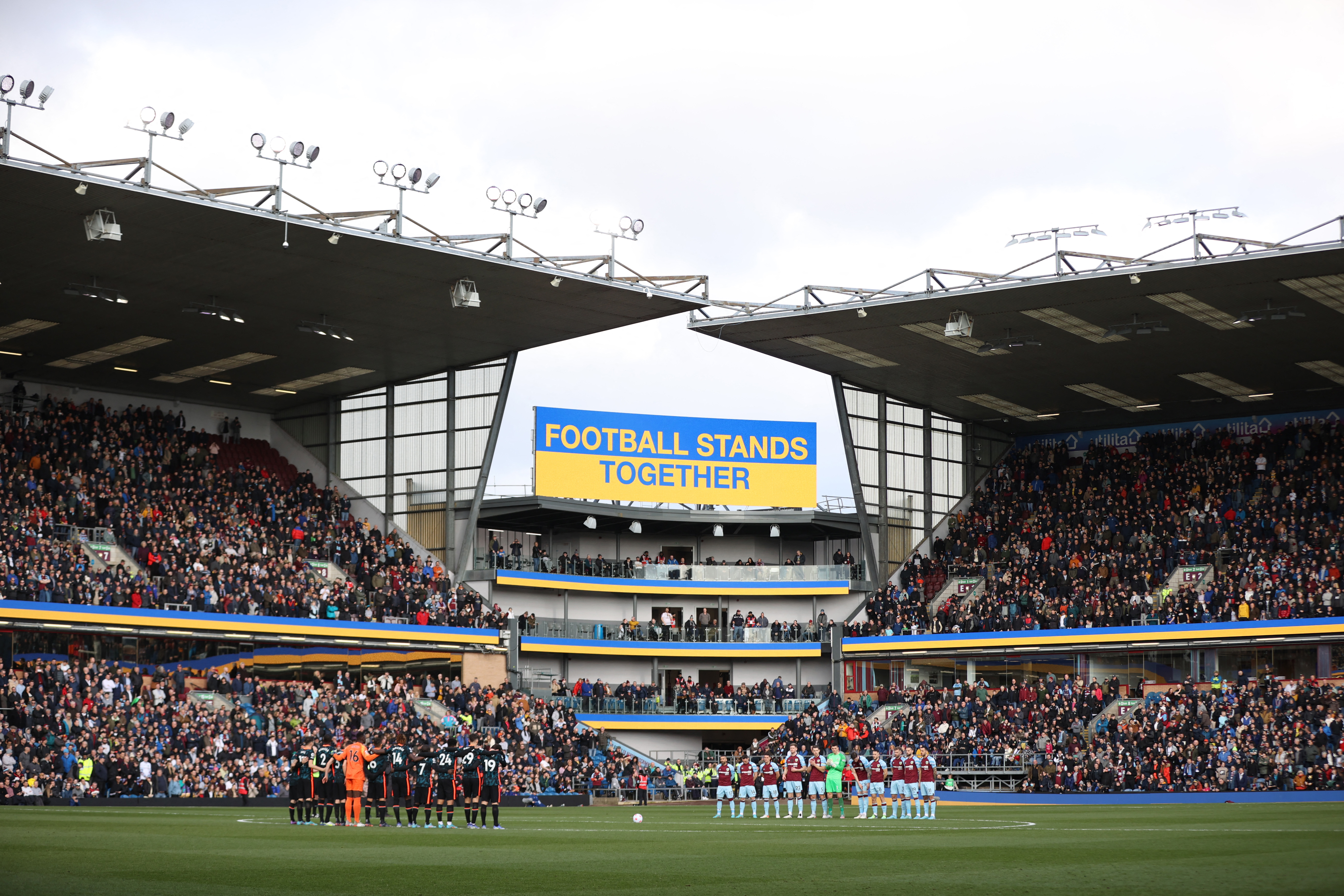 But Chelsea supporters shamed it by belting out the name of Russian owner Abramovich — drowned out by loud boos from Burnley.

”We take the knee together, if an important person from another club or from our club unfortunately dies, we show a minute of respect.

“It’s not the moment to give other messages, it’s a moment to show respect and we need our fans to commit to this minute of applause for Ukraine.”

Captains of every top-flight club wore armbands in the colours of the Ukraine flag.

Big screens at stadiums showed the words ‘Football Stands Together,’ while hoardings around the ground were switched to blue and yellow throughout the minute’s ovation.

Yet Chelsea supporters opted to chant the name of Russian owner Abramovich instead – which was met with a chorus of boos from the other three sections of the ground.

They continued to belt out their support for him at various times throughout the game… and on each occasion Clarets supporters reacted with boos.

It has been a stormy week for the Blues, after their Russian owner’s decision to sell the club he bought for £140million in 2003.

Abramovich, who has been a close associate of Vladimir Putin, hopes to get £3billion but the clock is ticking on his bid to sell the club.

The Raine Group, the American merchant bank in charge of the process, still expects to receive a number of bids before the deadline of March 15.

But SunSport understands that US investment firm RedBird Capital Partners — linked with a move — will not be among the interested parties.

In March 2021, RedBird paid £550m to acquire an 11 per cent stake in Fenway Sports Group, the owners of Liverpool.

Items I.4 and I.5 in the Premier League Rulebook state: “No person may directly or indirectly be involved in or have any power to determine or influence the management or administration of more than one club.

RedBird could in theory sell their stake in FSG, although the timescale would be very tight.

But there were claims last night that the private equity firm denied any intention to do so and any interest in putting money into Chelsea instead of Liverpool.

Turkish tycoon Muhsin Bayrak is among the parties hoping to buy the club.

Earlier this week there were reports that a private jet owned by the oligarch headed to Turkey to potentially discuss terms with Bayrak.

The £48.7million luxury 2019 Gulfstream G650ER aircraft – one of six in his fleet – flew from Moscow and briefly landed in Istanbul before heading to Turkish capital Ankara.

Bayrak claims that he has been locked in negotiations with Abrahimovich over buying the Premier League club and insists he is ‘in the negotiation phase for the signatures’.

Little-known Bayrak, worth a reported £8bn, has also vowed to ‘fly the Turkish flag in London soon’.

That suggests Abramovich may have travelled to Turkey in order to discuss details of the sale to the tycoon.

Now Bayrak’s claims and this latest report suggests he is set to complete the purchase.

He told Turkish outlet Yeni Safak: “We are negotiating the terms of the purchase of Chelsea with Roman Abramovich’s lawyers.

“We are in the negotiation phase for the signatures. We will fly the Turkish flag in London soon.

“We made our offer. Because of the war with Russia and Ukraine in the world. Because they find Turkey safe, they want to get most of the after-sales money in Turkey. We are planning to sign soon.”