SCOTT MCTOMINAY proved a cut above the rest as he fired Manchester United into the last eight of the FA Cup.

Sporting a do it yourself lockdown haircut the 24-year-old Scottish international pounced with a drilled first-time effort in the seventh minute of extra time. 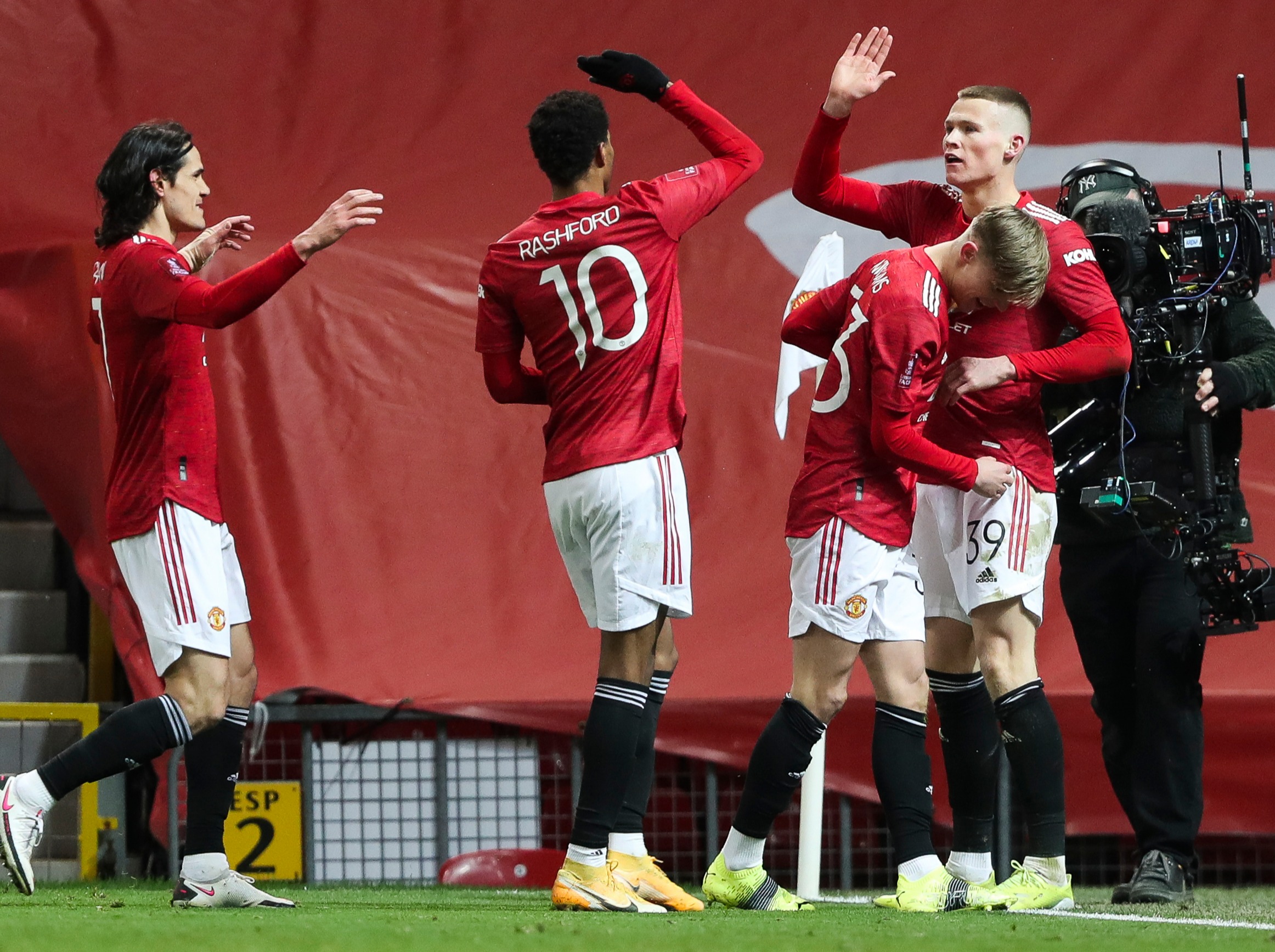 He spoke recently about his desperation to experience being part of a Manchester United team that wins silverware.

Thanks to him they are now a step closer.

He was captain and match winner with the only goal in the third round against Watford and part of the midfield engine room that wore down Liverpool in round four.

He had actually been rested for last night but came on as a 73rd minute sub as to add some much needed energy to a tiring team.

Then in the 97th minute he struck.

West Ham twice failed to clear their lines with headers allowing Marcus Rashford to touch off a loose ball to McTominay to fire home from ten yards.

It was his third in as many games and scoring one from distance in the 9-0 win over Southampton and a header that should have sealed victory against Everton.

For both Anthony Martial and Marcus Rashford this was their 250th appearance in a Manchester United shirt.

Fabianski made a sublime save to deny Lindelof in the first-halfCredit: News Group Newspapers Ltd

For Rashford, at 23 years and 101 days, he became the fourth-youngest player in the club’s history to reach that mark behind Norman Whiteside, George Best and Ryan Giggs.

Early on they both look like they wanted to mark the occasion in style as well for they were on their game right from the first whistle charging at the visitors.

Martial would have the first decent effort of the game which would also lead to an unfortunate injury blow for West Ham.

Of the six changes manager Solskjaer made to his team one was at left back with Alex Telles coming for Luke Shaw who has been enjoying the best period of his United career.

But there is no drop in standards when summer signing Telles comes in who like Shaw is equally adept defending and getting forward.

Indeed his delivery is among the best in the squad.

It was he who picked out Martial with a superbly weighted through ball on 11 minutes but as he shot Angelo Ogbonna slid across to block his effort.

Martial’s momentum carried him forward with his outstretched boot crunching in to Ogbonna’s ankle.

After lengthy treatment he simply could not go on and limped gingerly off the pitch and down the tunnel to be replaced by Issa Diop.

Diop himself would need attention later in the half after a nasty cash of heads with Martial.

It would lead to him going off at half time as a concussion sub.

Having had an early chance, French forward Martial would turn provider in the 16th minute. 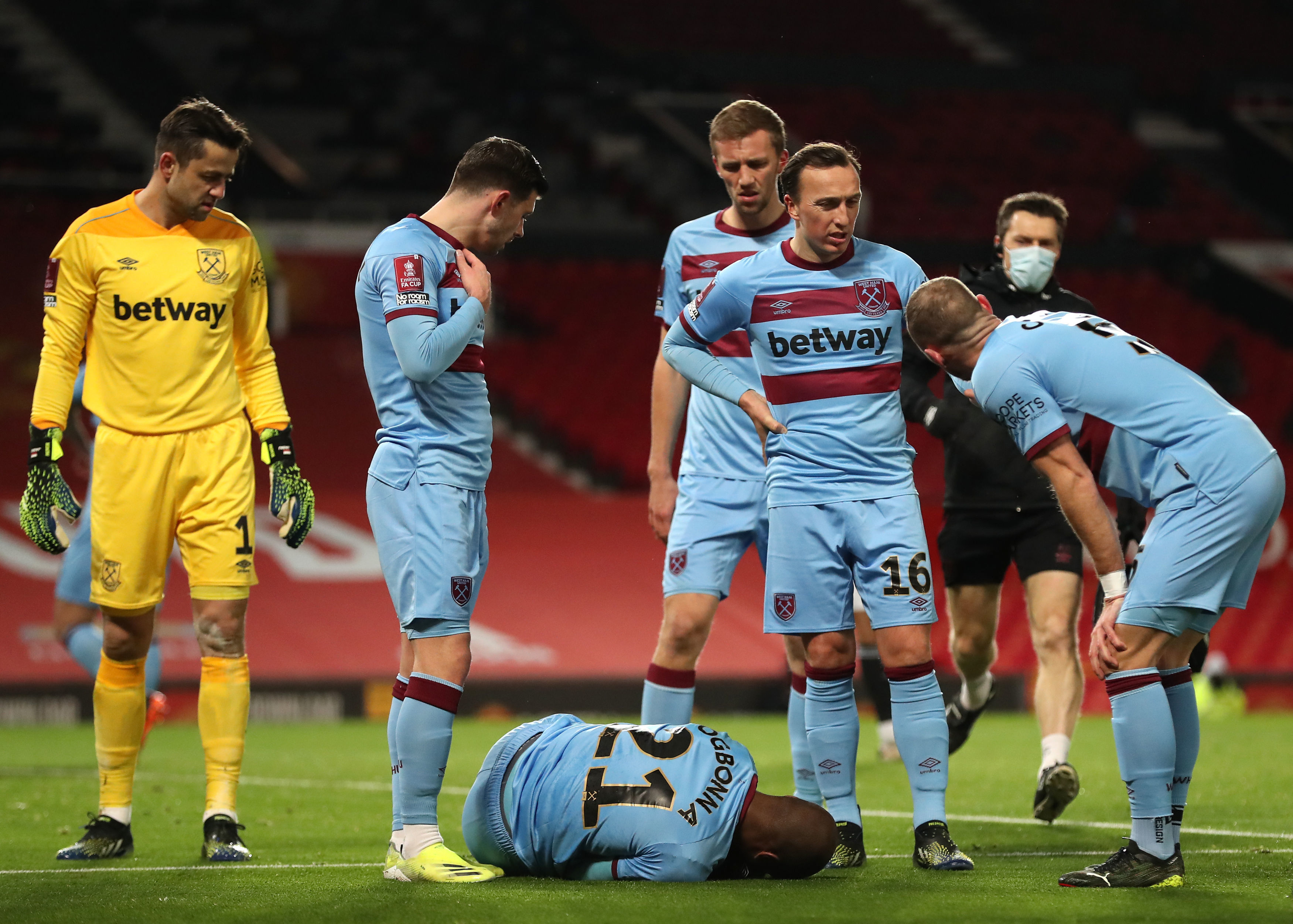 Van de Beek had another tough evening before being replaced by FernandesCredit: Getty Images – Getty

It was Telles pass into the box that found him and he expertly cushioned the ball with his chest and laid it off to Greenwood but his effort was blocked by the sliding Aaron Cresswell.

Solskjaer has praised Greenwood lately for his performances describing him as the stand out player in the 3-3 draw with Everton.

There was one moment last night when he mesmerised Mark Noble with a clever turn along the touchline to leave him trailing.

But it is goals that Greenwood needs and so far this season he has only four and just one in the league.

It took a superb save from Lukasz Fabianski to stop the home side from taking the lead on 27 minutes.

Telles is the best corner kicker at the club as well and when he swung one in Victor Lindelof stooped to head goalwards.

The ball deflected off Craig Dawson and was heading for the bottom corner, but Fabianski dived full length and stretched every sinew to claw it away.

At the opposite end of course Dean Henderson was hoping to stake his claim for a decent run between the sticks with David De Gea’s form once more coming into question following the Everton game.

The problem was Henderson was having little to do in order to raise the volume of the clamour for him to get his chance.

West Ham had one shot to United’s eight by the break which pretty much summed up how much Solsjaer’s men were on top.

Having run themselves into the ground with that impressive 3-1 win at Aston Villa, the Hammers had looked fatigued in their goalless draw at Fulham. 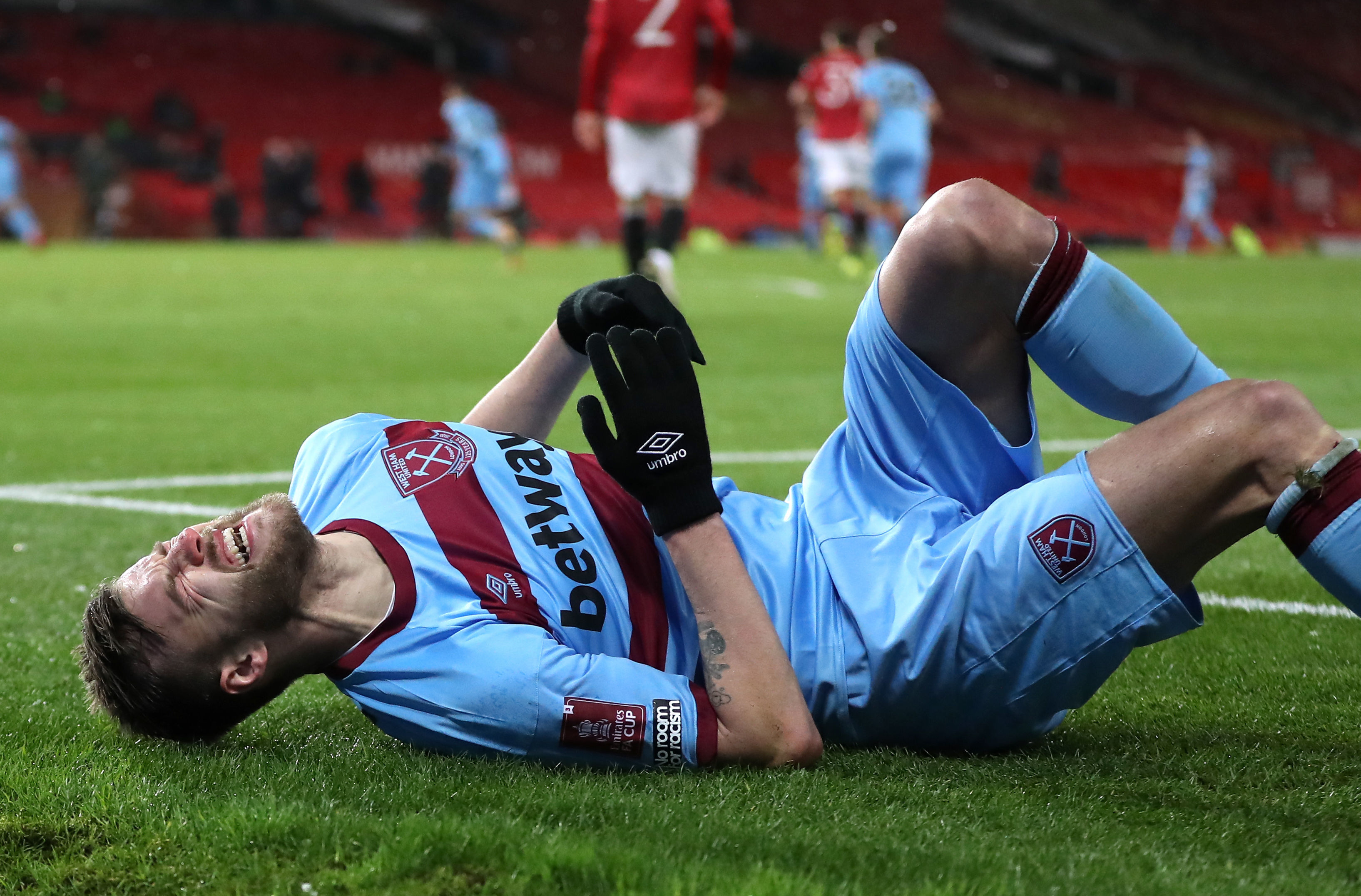 Yarmolenko was also forced off the pitch due to injury at Old TraffordCredit: PA:Press Association 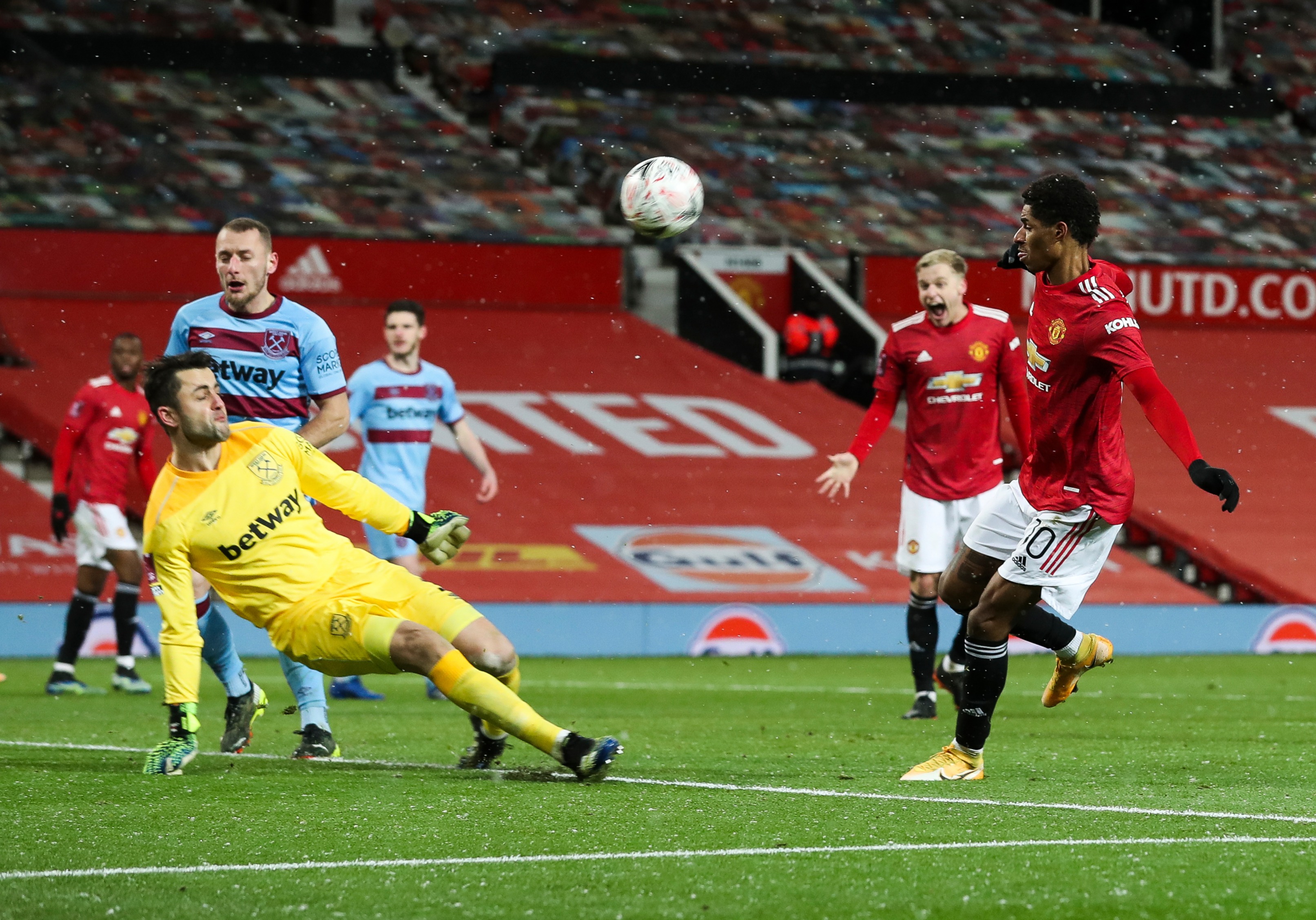 Fabianski was forced into making another sharp save in the second-half, this time from RashfordCredit: News Group Newspapers Ltd

Still, Moyes clearly expected more from his men as he raced down the touchline at the break for his half-time talk.

While Diop’s change was enforced he also brought Ben Johnson on for Jarrod Bowen.

But a third injury on the night forced Moyes into another change early in the half.

Andiy Yarmolenko took a knock and 18-year-old Mipo Odubeko who came through the ranks at Manchester United finally got the chance to play at Old Trafford.

The wave of red attacks would continue early in the second half before West Ham got a foot in the game but it became very scrappy..

Fabianski had to come to the rescue again with as he made himself big to deny Rashford at close range.

Then there was alarm bells ringing when Lindelof gave the ball away right on half way and Pablo Fornals broke and tried to find Declan Rice to his left..

Credit to Lindelof for his recovery for he would get back to intercept that pass.

United were missing that X-factor that Bruno Fernandes gives them and with extra-time looming he was brought into the fray for the ineffective Donny van de Beek.

Scott McTominay would also come on for Nemanja Matic.

Nobody wanted extra time in these Baltic temperatures so Solskjaer stuck Edinson Cavani on as well for the last five minutes of normal time in the hope his poaching instincts could do it.

But another 30 minutes for tiring teams it was.

And McTominay ensured it was United who booked their place in the last-eight with his sweetly-struck extra-time finish.