IT was a night of milestones at the Etihad – not to mention John Stones.

Manager Pep Guardiola – who turns 50 today – had the perfect end to his forties as his team took control of the title race. 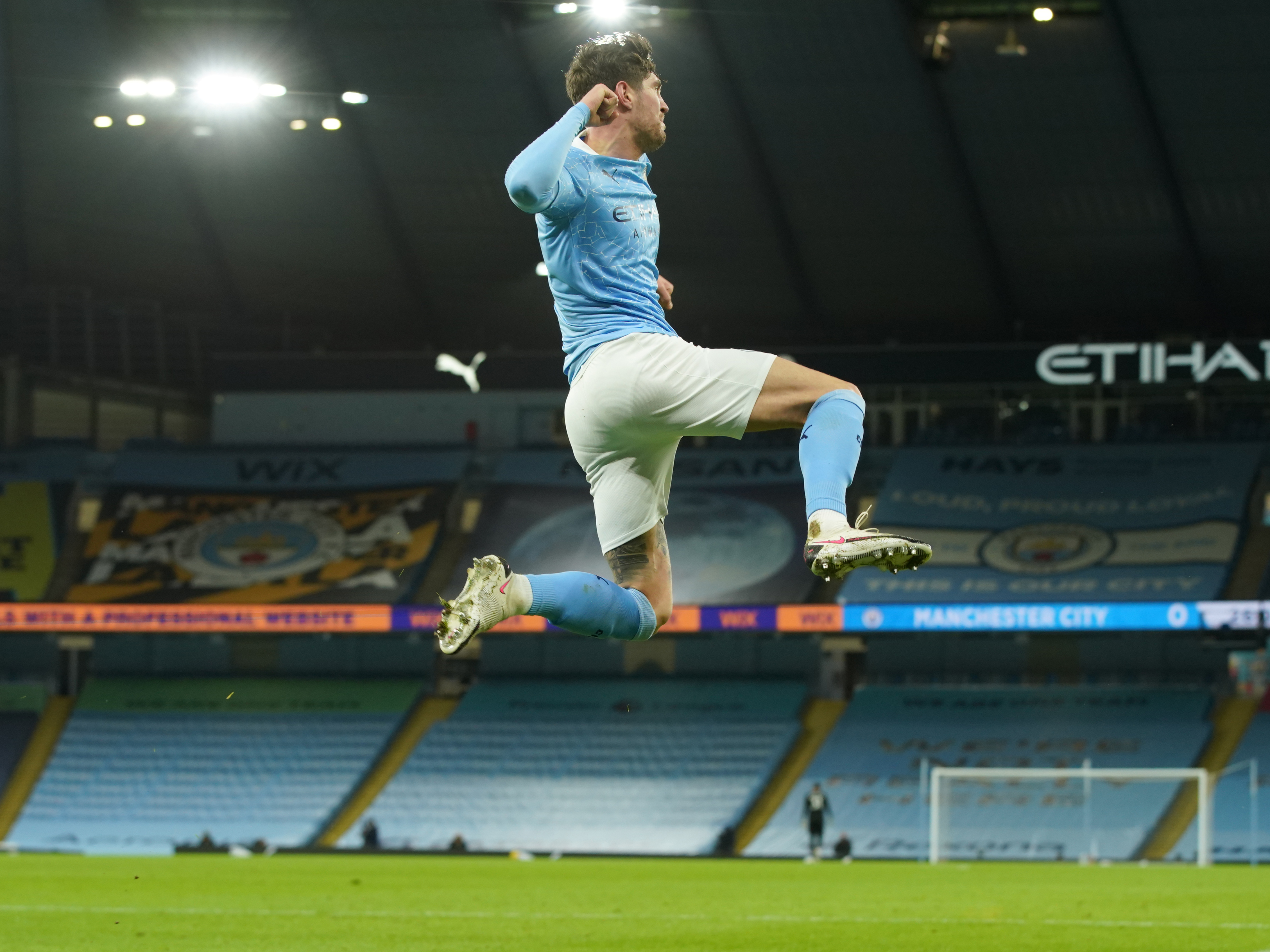 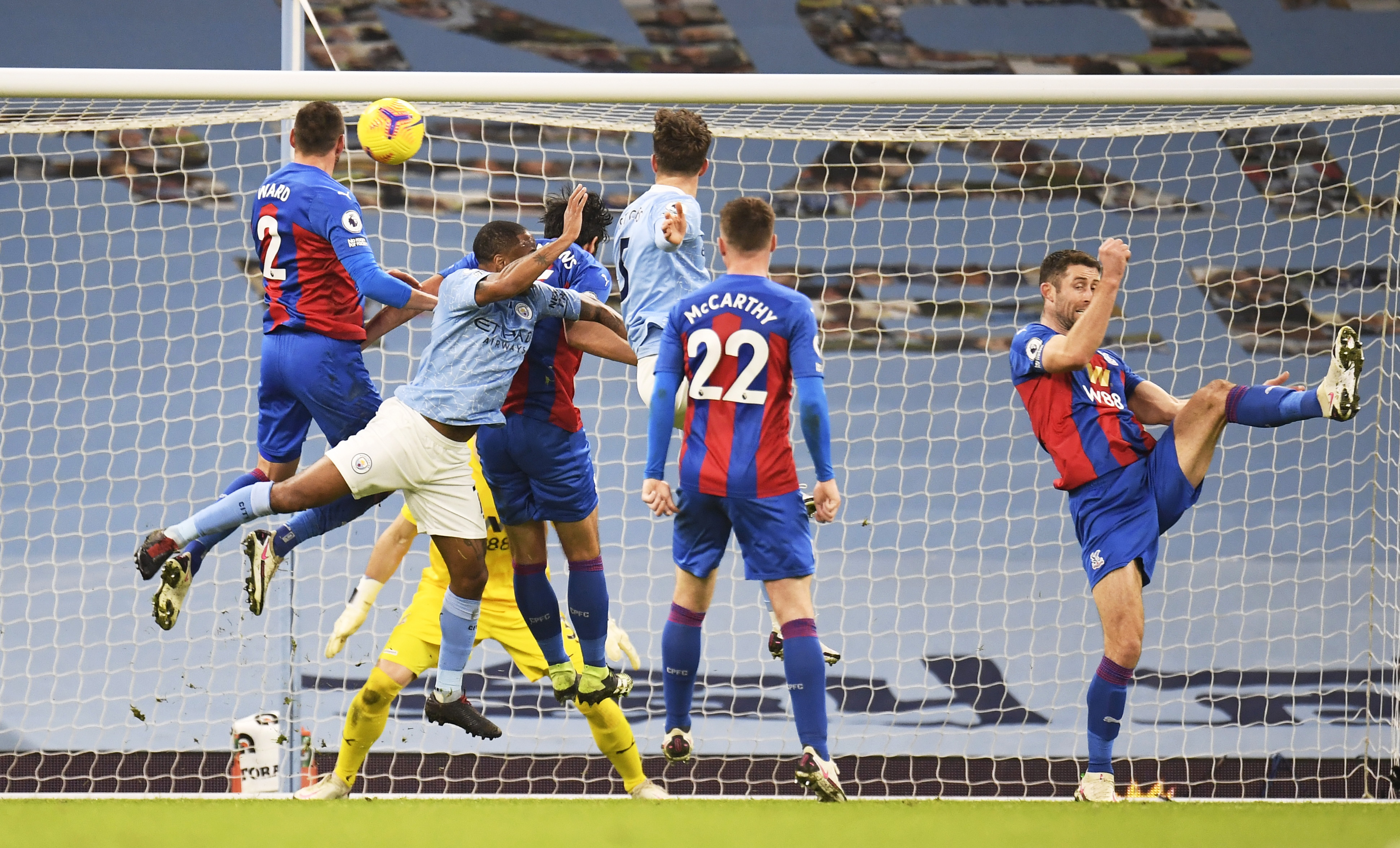 Stones got Man City off the mark with a superb first-half headerCredit: Reuters

Never mind half centuries, Kevin De Bruyne reached 100  – in terms of assists for the club – and he did so in typically brilliant fashion.

Meanwhile Stones did his best to upstage the pair of them by scoring his first league goals for City.

Everyone loves a birthday surprise – it’s fair to say Pep probably didn’t see that one coming.

Not many have seen City coming either. All eyes have been on Manchester United and Liverpool, who met down the M62 earlier in the day.

Yet with the minimum of fuss, Guardiola’s men have closed the gap on the pair of them – and could be top – for a couple of hours at least – on Wednesday night.

Guardiola insisted on Friday that he would not be paying any attention to what was happening at Anfield.

Perhaps he knew something we didn’t – as he made the right call by not watching.

But his point was he wanted to give his full attention to Crystal Palace who have not lost either of their last two trips to the Etihad. 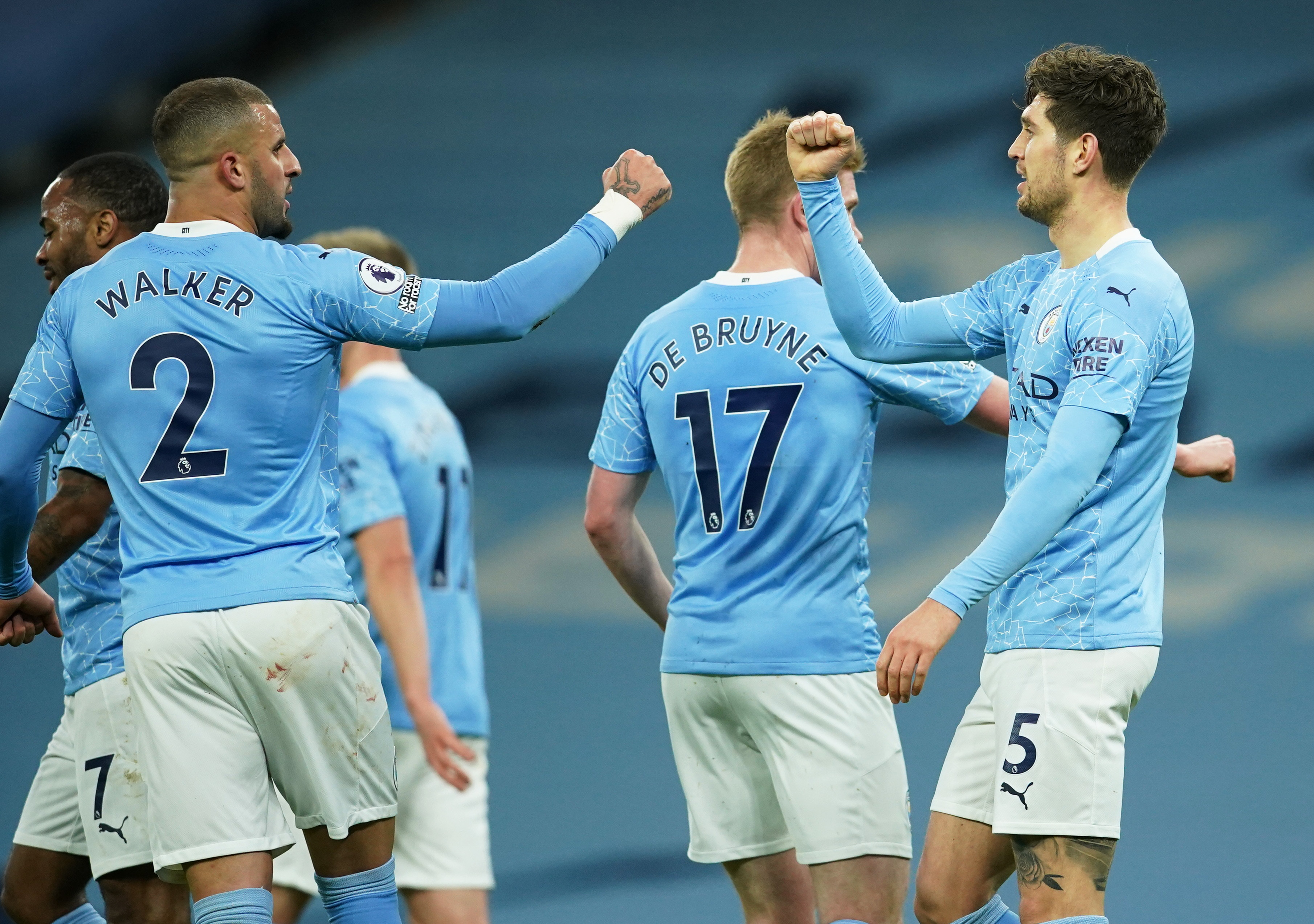 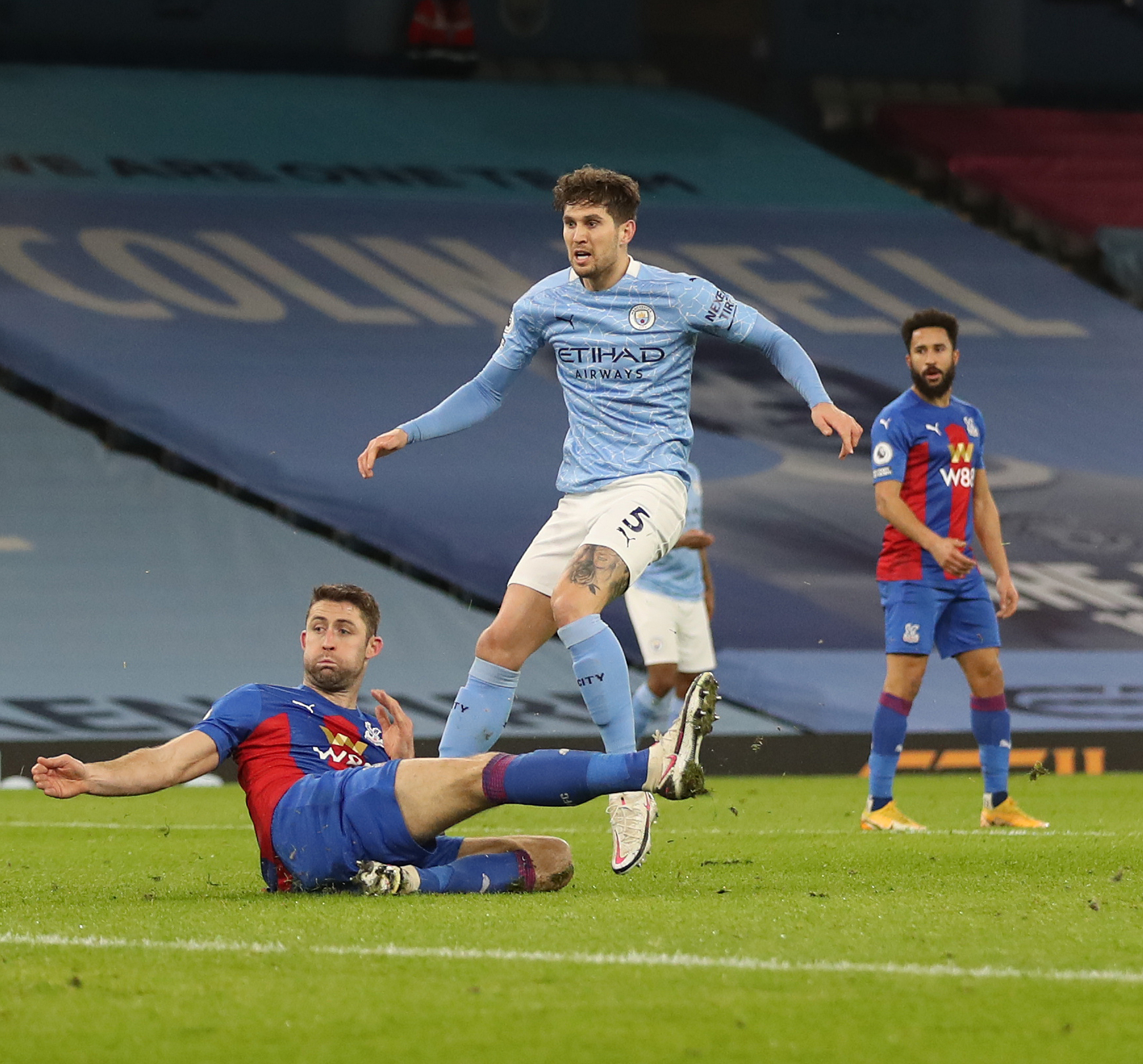 Stones scored once in each half as he proved to be the unlikely hero for CityCredit: Mark Robinson – The Sun

Yet surely he was aware that the result down the M62 was far from the worst for his team.

He sprang something of a surprise in his selection by leaving out man of the moment and current top scorer Phil Foden.

City had won their last seven games in all competitions – four of them in the league – to quietly put themselves back on track.

Yet they took a while to get going here with Palace proving hard to break down just as they did at Arsenal on Thursday night.

A raft of injuries for the Eagles – including star man Wilf Zaha – did not stop them from being well-organised.

De Bruyne saw a shot deflected wide as the home side started to settle and then the Belgian, Raheem Sterling and Ilkay Gundogan all saw shots blocked by Palace defenders in the same passage of play.

It was clearly going to take something special to get through them – but that’s exactly what De Bruyne is.

His corner was half cleared but the ball was worked back out to him on the right hand side by Sterling.

KdB fizzed over a delicious pass with the outside of his right peg and Stones rose highest to nod past Victor Guaita. 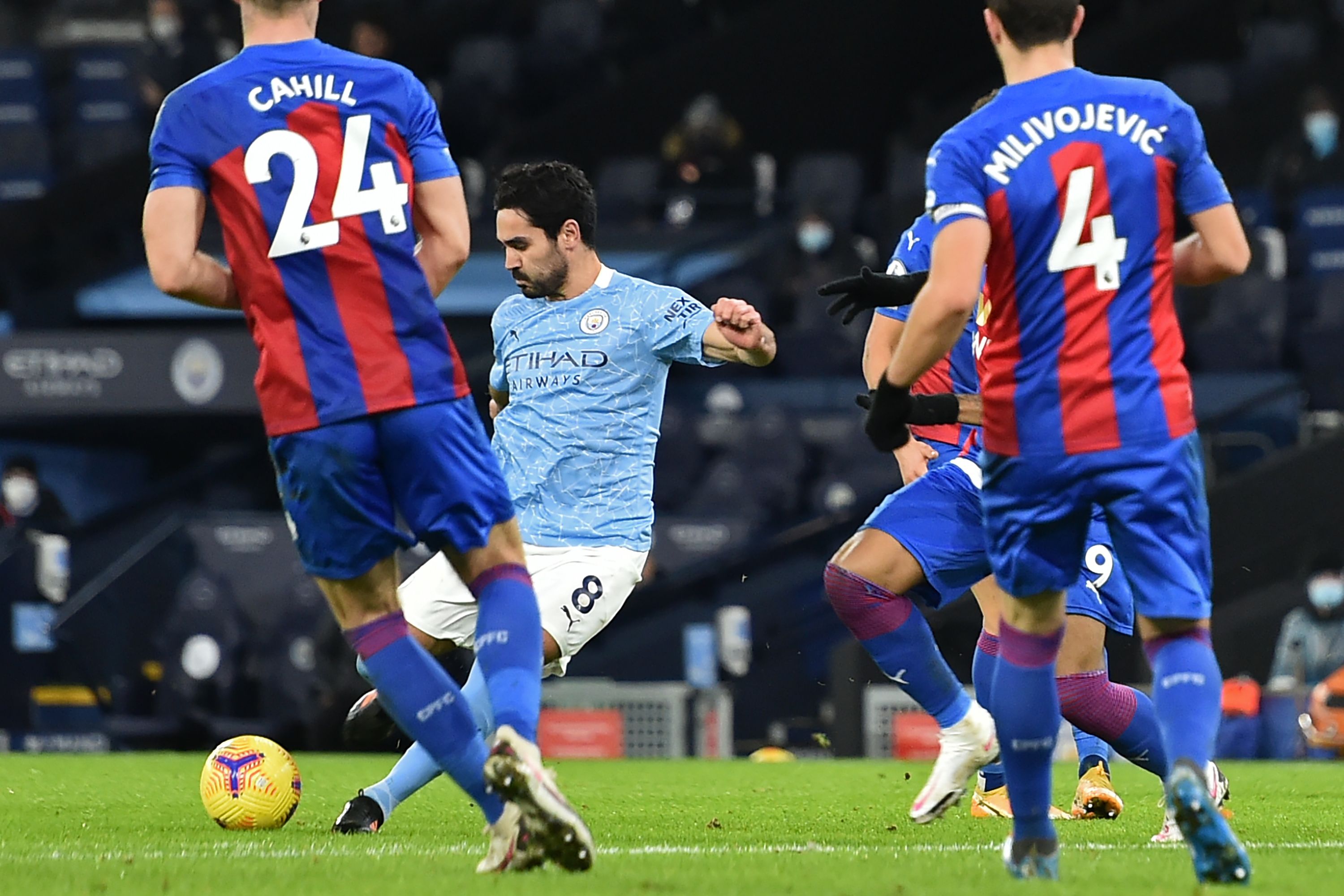 Ilkay Gundogan doubled City’s lead in the second half with an excellent strikeCredit: AFP 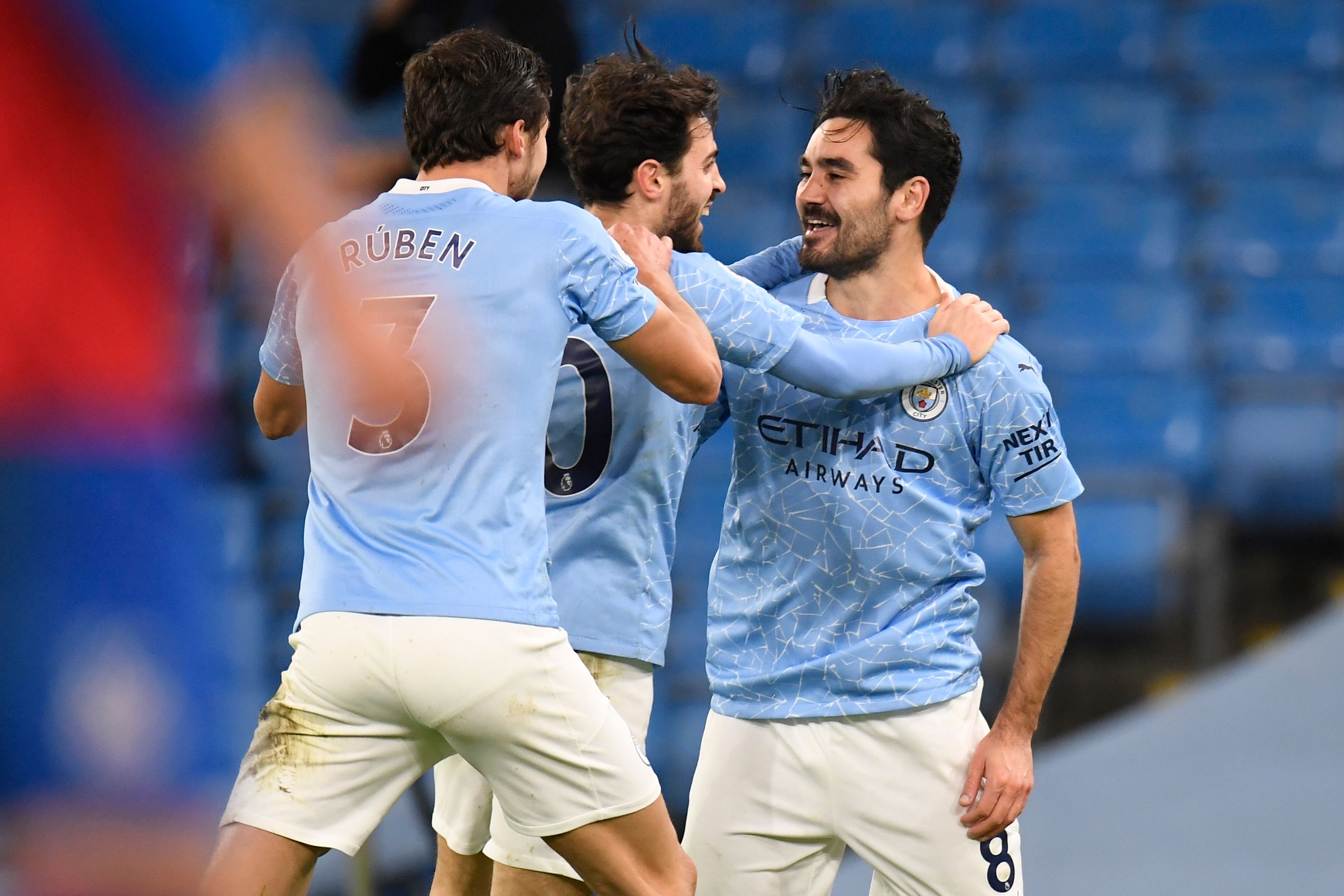 Of his 100 assists, not too many have been better than that. Amazingly his tally is at least 30 more than any other player since he made his debut.

Remarkably it was the England defender’s first league goal for City – four and a half years after he joined.

He has been outstanding at the back for City this season and is starting to chip in with goals – he  also got the opener in the Carabao Cup win at Old Trafford earlier this month.

Having made the breakthrough, City went to finish the visitors off.

A flick on from Gundogan was met by a diving header by Gabriel Jesus but he could not get the power to trouble the Eagles keeper.

The Brazilian could really do with a goal. It was way back on November 8 last time he scored in the Premier League.

In fact that was the last time a striker found the net for Guardiola’s men in this competition. But who needs forwards?

Just over ten minutes after the re-start City effectively had the game wrapped up with another beauty.

De Bruyne’s corner was only half cleared to Gundogan on the edge of the box. The German took a touch to go round Andros Townsend before curling a beauty from 20 yards into the top corner. 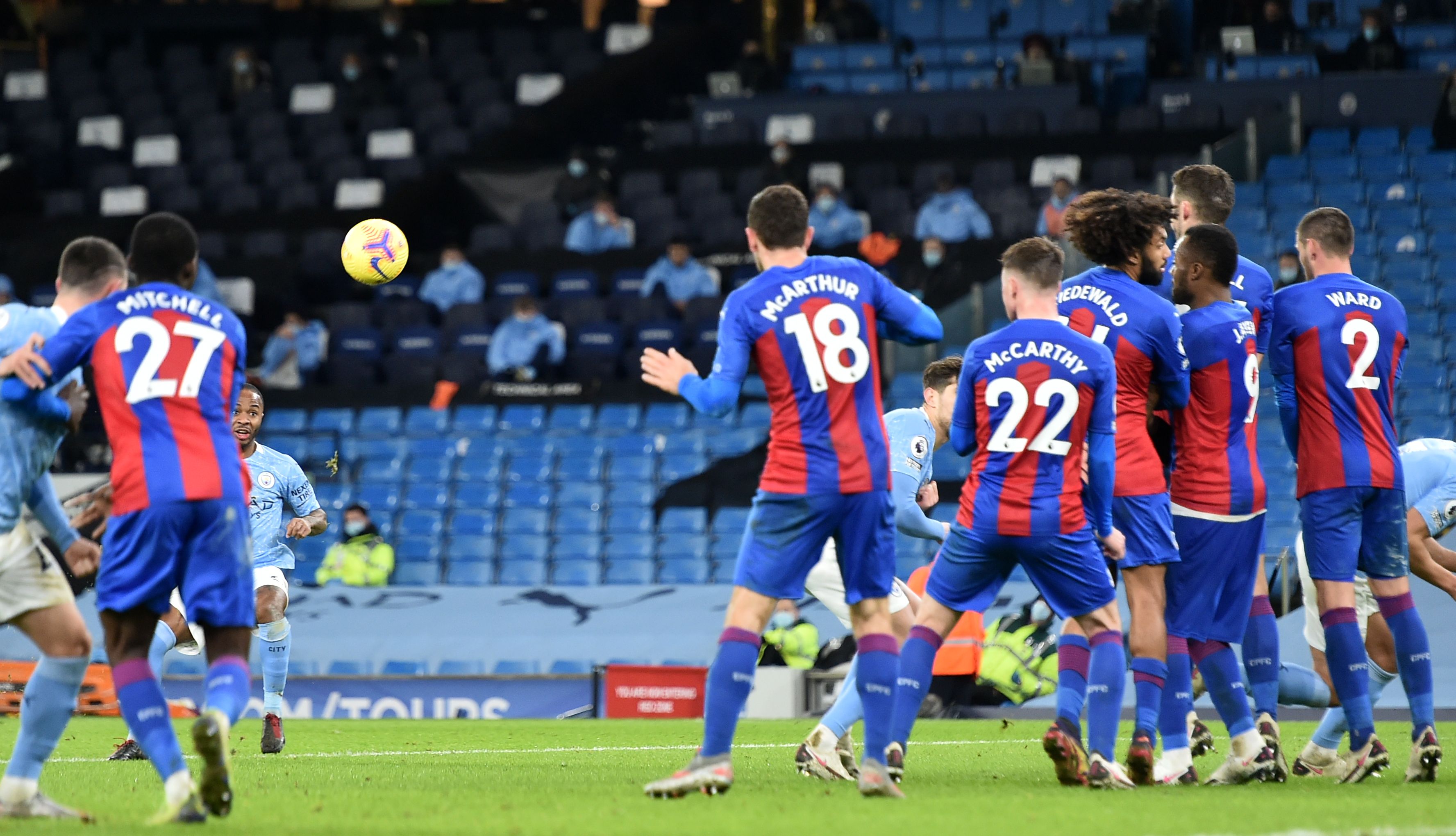 Raheem Sterling’s free-kick made it 4-0 moments before full-timeCredit: AFP

Guaita got a touch – but he wasn’t keeping that one out and the in-form midfielder had his fourth goal in his last six Premier League matches.

The only question now was how many City would win by and another one arrived midway through the second half.

Ruben Dias – the centre back who has teamed up so effectively with Stones this season – saw a thumping header saved by Guaita.

It fell nicely for Stones who swept home left footed from 12 yards.

City have conceded only one Premier League goal when those two have been together – now they are teaming up at the other end of the pitch too.

There was still time for another as City won a free-kick right on the edge of the box.

Sterling – who skied his penalty here on Wednesday against Brighton – stepped up and steered another beauty into the top corner.

One more would have made it 5-0 – the perfect score for the birthday boy. It didn’t come but he won’t let it worry him.

Eric Garcia looks back at his time at Man City