RANGERS were rampant as they put St Mirren to the sword and charged even closer towards the league title.

Steven Gerrard’s men will be crowned champions and end Celtic’s domestic dominance if the Hoops fail to beat Dundee United on Sunday. 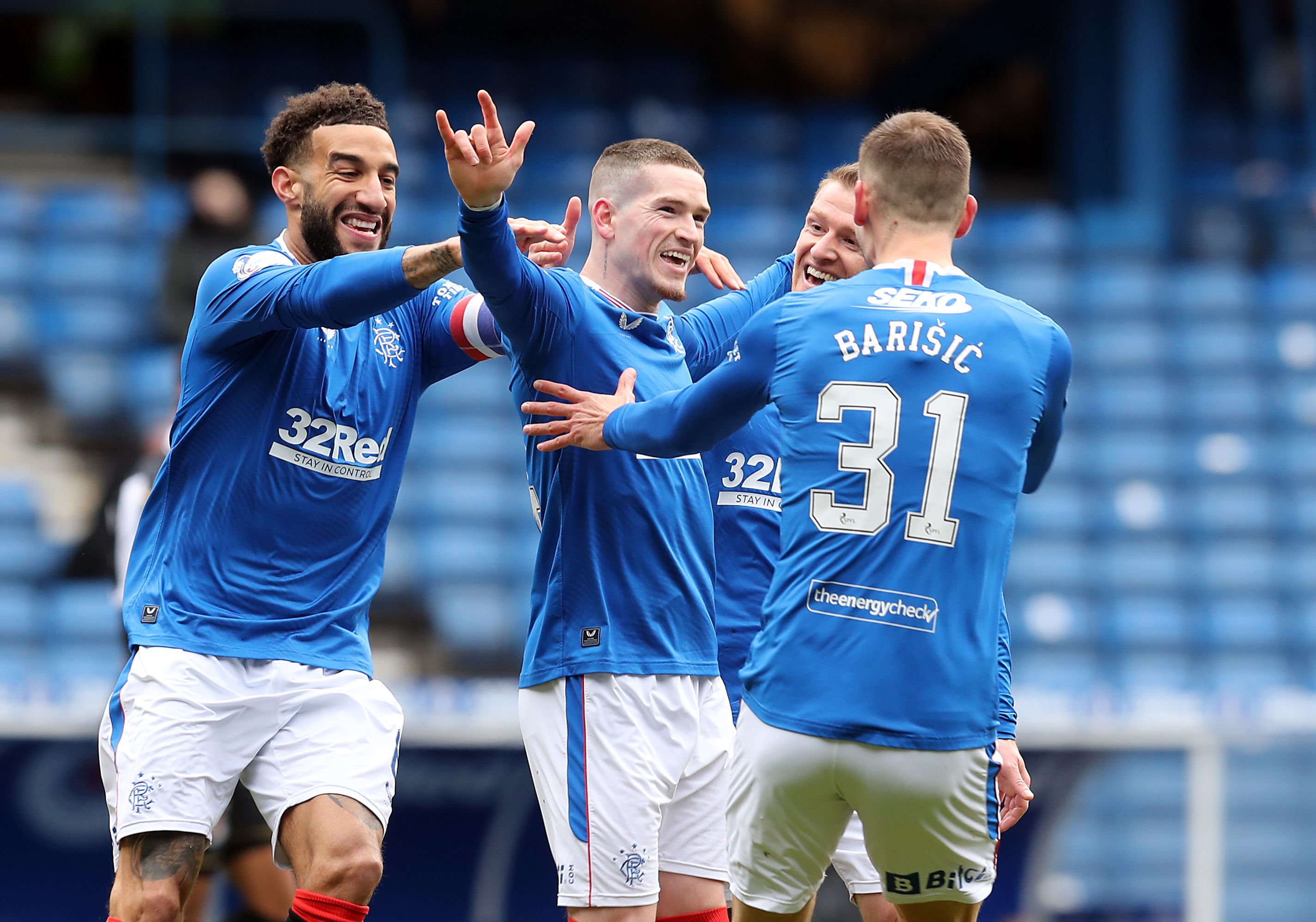 Ryan Kent put the home side in front with a left-footed strike from outside the area before Alfredo Morelos followed up moments later to coolly double the lead.

Moments after the restart Ianis Hagi put the icing on the cake.

The win puts Rangers on the brink of their first league championship in the top tier since 2011, and would also be the first of manager Steven Gerrard’s reign.

Gerrard himself had to watch from the stands as he served a one-match touchline ban after being sent to the stand during the win against Livingston on Wednesday, and he made one change to the side that started that night as Hagi replaced Scott Arfield.

Rangers fans from congregated outside Ibrox before the game, flouting lockdown rules to greet the squad, set off pyro and chant as a pre-title party took place. 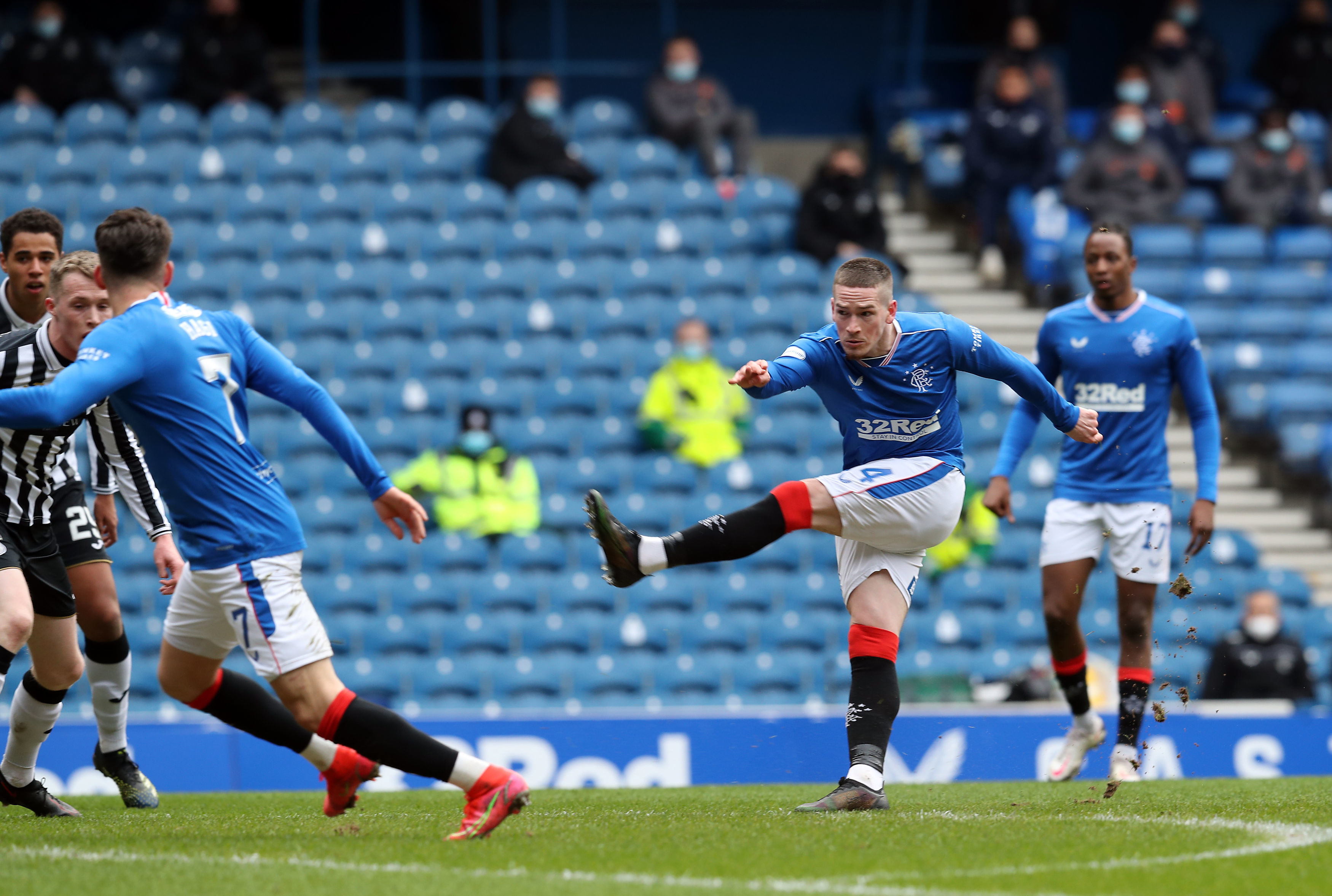 The players themselves then set about having a party on the field, with two fine goals in the opening 20 minutes.

Kent’s opener was a fantastic strike. The winger found space on the edge of the box to receive the ball, faked one way and then the other before unleashing a terrific left-footed effort that arrowed into the bottom corner.

That goal came after 15 minutes and Rangers continued in rampant fashion.

Glen Kamara slid a ball through for Morelos who’d peeled off Joe Shaughnessy and he superbly slotted the ball across the St Mirren goal and into the far corner from a tight angle.

Alfredo Morelos scored his tenth Scottish Premiership goal of the season to make it 2-0Credit: Willie Vass – The Sun

The Light Blues’ midfield was pulling all the strings with Kamara and Davis impressing in particular. Those two combined to set up Joe Aribo for another pop at goal but former Gers keeper Alnwick was able to put his body in the way of the shot from 25 yards out.

Hagi gave Rangers the perfect start to the second half, controlling and finishing well as Kent turned provider.

At the other end Allan McGregor continued to show why he’s been so important to the Ibrox club this season, pulling off a wonderful save from Jonathan Obika’s close-range volley on 68 minutes.

In truth Rangers seemed happy to play the patient game as the clock ticked on.

A series of substitutions also stifled the game as the home side introduced Arfield, Leon Balogun, Jermain Defoe and Scott Wright.

Former England international Defoe looked dangerous within minutes of coming on and raced through on goal only for the offside flag to go up.

Then Arfield tried his best to add a fourth but Alnwick tipped the ball over the bar with five minutes remaining.

For St Mirren, they are still in the top six but face a challenge from in-form St Johnstone and face Hamilton next week.

If Celtic fail to win at Tannadice tomorrow, the Gers will be champions.

And if the Hoops do go and beat Dundee United, it will only add extra fire to the Old Firm derby in two weeks’ time because Rangers could be crowned league winners at the home of their rivals.