Steve Bruce has revealed that “a lot” of Newcastle United players have not been vaccinated against Covid and cited “conspiracy theories” as a reason why so many professional footballers are reluctant to get inoculated.

“We’ve got a lot of players who haven’t had the jab,” said the Newcastle manager. “It’s their prerogative. We’ve had two or three players really sick with Covid here and Karl Darlow spent the best part of a week in hospital with it, so we’ve seen the severity of it first-hand. But there are a lot of conspiracy theories out there.

Given the stark reality that Darlow lost two stone during the course of five nights in hospital this summer and is still not fit enough to return to the first-team squad, the high number of vaccine refuseniks at St James’ Park may seem surprising. However, Bruce is far from the only manager imploring his squad to protect themselves. Ole Gunnar Solskjær has recently spoken of his struggle to convince certain players at Manchester United to have the inoculations and Neil Warnock said“the majority” of his Middlesbrough squad had declined invitations to be injected.

Chelsea’s Pulisic out of Arsenal derby after positive Covid test

The USA forward missed Chelsea’s open training session on Wednesday, and is not available for Sunday’s game at the Emirates Stadium due to self-isolation.

Hakim Ziyech and N’Golo Kanté are both back in training, and could yet prove their fitness in time to feature in the north London derby.

“Christian’s absence is unfortunately pretty easy to explain, he had a positive test, and needs to follow the protocols,” said Tuchel. “So he was not in training and is not available for the game.”

Ziyech suffered a nasty-looking shoulder injury in Chelsea’s penalty shoot-out European Super Cup win over Villarreal, while Kanté has been out of action with an ankle issue.

But both influential Blues players will now have the chance to prove their match fitness in Saturday’s training session ahead of the Arsenal clash. PA Media

Their Newcastle counterpart appreciates it is becoming a widespread problem in football. “We had a meeting of all the Premier League managers a week or so ago and half the meeting surrounded Covid and how vital it is that people are jabbed,” said Bruce. “A quarter of the people in hospital at the moment are aged under 30 – and that’s simply because they are not having the jab.” 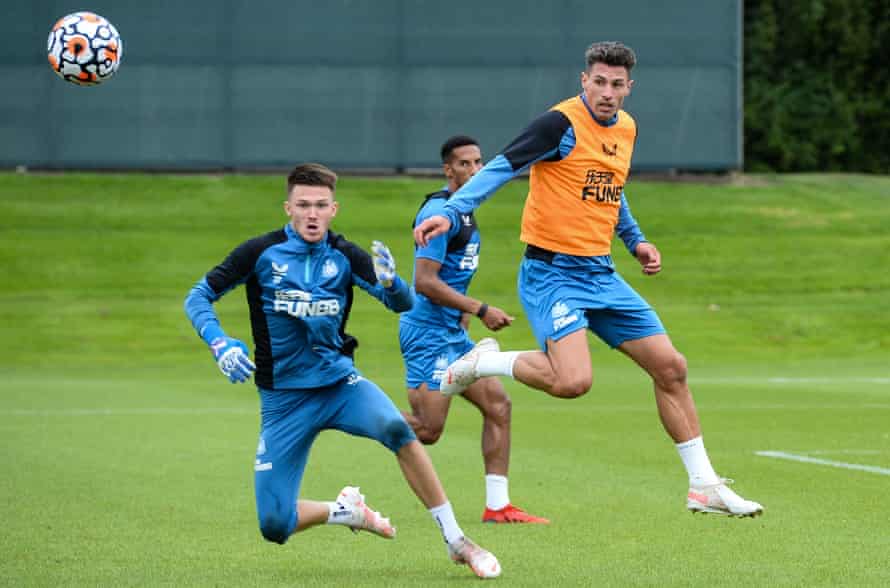 Given that Darlow is regarded as one of Newcastle’s fittest professionals, Bruce was “shocked” by the goalkeeper’s appearance when he came out of hospital having lost almost two stone. His continued absence from first team involvement at a time when the club’s first-choice goalkeeper, Martin Dubravka, is sidelined by a foot injury complicated by a post surgical infection dictates that Freddie Woodman will once again play in goal at Aston Villa on Saturday.

Woodman had been heading to Bournemouth on loan before Darlow’s illness and could remain on Tyneside as Bruce contemplates the hitherto “unheard of” potential need to name four goalkeepers – Dubravka, Darlow, Woodman and Mark Gillespie – in the 25-man Premier League squad he must finalise by the end of the month.

Darlow, meanwhile, has told Bruce that once he feels well enough he will speak publicly about his experience of Covid and appeal for everyone to get vaccinated.