Nine points; three clean sheets; Harry Kane staying put; top of the table. Had you offered that a fortnight ago to the 60,000 supporters streaming through the turnstiles on Sunday, they would have snapped your hand off.

The day was supposed to be about their talismanic centre-forward. Instead, it was his side-kick, Son Heung-min, who secured the points with a free-kick shortly before the break. It was the perfect way to mark becoming the first Asian player to reach 200 Premier League appearances. He is so much more than an understudy.

Much that has been good about Spurs in the past half-decade or so has come with the Kane, Son and Dele Alli — who has taken to his new role as a box-to-box midfielder with aplomb — triptych lined up together. Omens are good for Nuno Espírito Santo.

Watford can, despite the result, look back on decent outing. After a wildly inconsistent start against Aston Villa and Brighton respectively, they acquitted themselves well. These are, realistically, days where anything gained would be a bonus.

It set the tempo. Nuno was bidding to be the first Tottenham manager to win their opening three league fixtures since Arthur Rowe in 1949, and, in some ways, the match was a throwback to football of the past. Both teams attacked with pace down the flanks and full-backs — Tottenham’s at least – overlapped merrily. 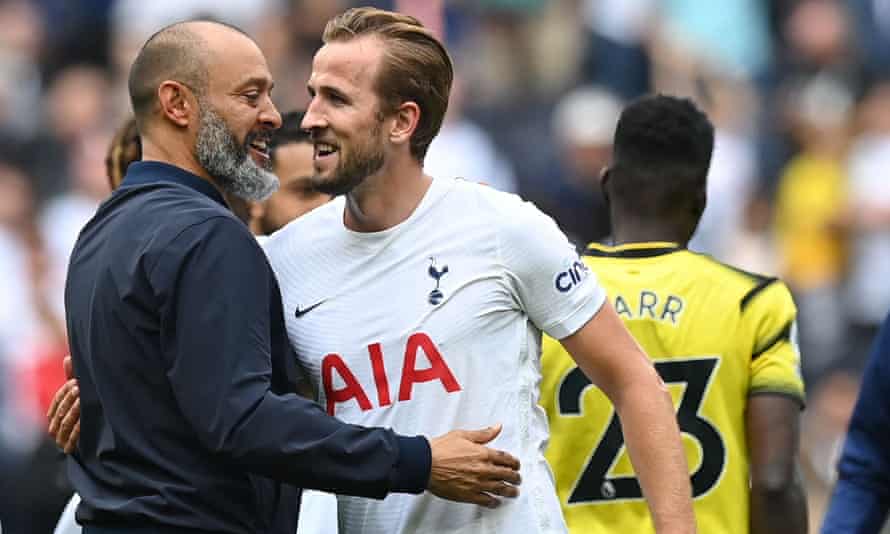 And unlike in their opening two fixtures, Nuno’s side enjoyed the lion’s share of possession. Japhet Tanganga, afforded more opportunity to maraud than in his man-of-the-match display against Manchester City – saw a strike blocked by Daniel Bachmann, while both Eric Dier and Dele struck meekly at goal. A beautiful move also saw Tanganga do brilliantly to keep the ball in at the byline only for Steven Bergwijn’s effort to be blocked.

Bergwijn had a hand in the goal too, his clever feet drawing a foul from Craig Cathcart. From near the left touchline, Son curled the ball into the goalkeeping equivalent to cricket’s corridor of uncertainty. Bachmann was flat-footed; the Spurs faithful roared. Not one the Austrian will want to see again, although he redeemed himself later when scrambling to tip a wickedly-deflected Pierre-Emile Højbjerg free-kick wide.

“Nice one Sonny” got an airing. Inevitably though, it was not the day’s biggest cheer. You guessed it. Forgiven? Yes. Forgotten? Well, call it temporary amnesia at least.

Alli came close to adding a second after combining with Son and Kane, with the No 9 almost getting the goal he so desired twice in 30 seconds late on. William Troost-Ekong made a superb sliding challenge to prevent a far-post tap in and Bachman then saved a snapshot from the resulting corner.

To their credit Xisco Muñoz’s side showed little fear. Emmanuel Dennis’s electric pace ensured Tanganga could not neglect his defensive duties, while Ismaïla Sarr — who already looks at home in top-tier – was a constant thorn on the opposite flank. His early drive warmed Hugo Lloris’s hands, while Dennis fired a free-kick well over from a promising position.

Having drawn a foul that saw Kane booked shortly before half-time, Sarr started the second period turning Sergio Reguilón on the inside. Kucka blazed over. Later, Sarr himself saw Carlos Sánchez get in the way of a close-range effort. There was to be little else to alarm Lloris.

Shortly before the hour the strange sensation of both sets of fans singing the same name swept across the ground. Moussa Sissoko. He may have lost that extra yard that, at times, made him unstoppable but his acquisition from these parts could prove shrewd. Striking from distance, though, is not his thing.

Having only made the switch late on Friday it was a surprise he started; there may be an internal enquiry at Tottenham HQ come Tuesday.

Just the transfer window to navigate now before the international break. Daniel Levy’s phone will remain firmly on. It is likely to be outgoing calls only; the Greater Manchester area code was blocked a while back.