CAPTAIN SIR TOM MOORE brought the nation together at a time of crisis to raise funds for the NHS. 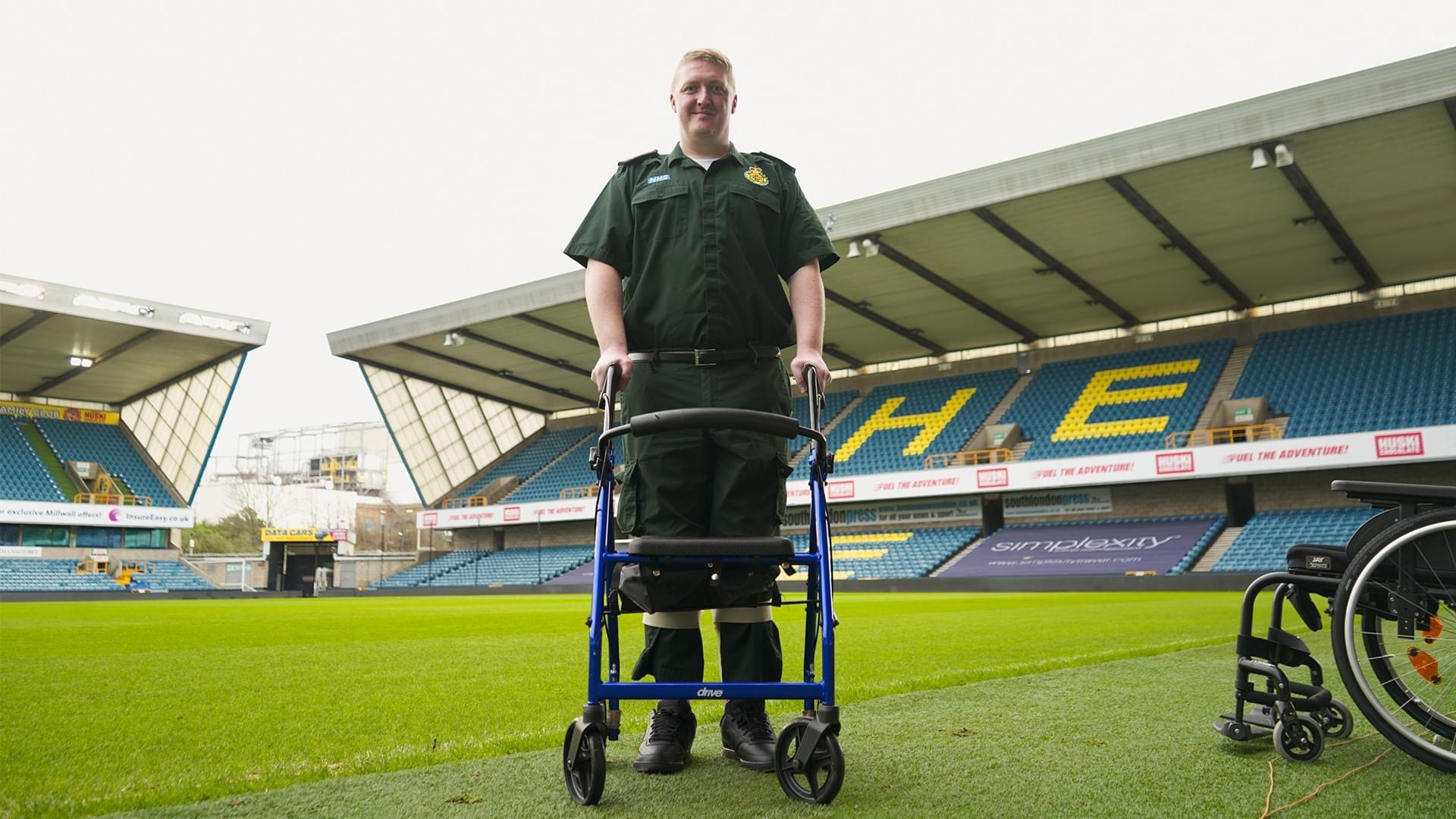 The lifelong Lion, 39, is a 999 emergency call handler for the London Ambulance Service.

And in August he became paralysed from the waist down by a rare condition called Cauda Equina Syndrome that could have seen him lose his life.

So inspired by Captain Tom, Sean walked a lap of The Den on his zimmer frame – and has so far raised £78,000.

It was written in the stars that the day Sean picked to do his walk at The Den – which took ONE HOUR – was on the same day when Captain Tom sadly passed away.

And the great man himself even sent Sean a special message via his Twitter account days before his death after hearing about his story and fundraising efforts.

In it, the 100-year-old World War II veteran wrote: “Such an inspirational young man. Amazing effort.”

Sean told me: “Captain Sir Tom united the nation – Brexiteers and Remainers and people of all creeds, politics and beliefs – behind one goal … to raise funds for our amazing NHS. 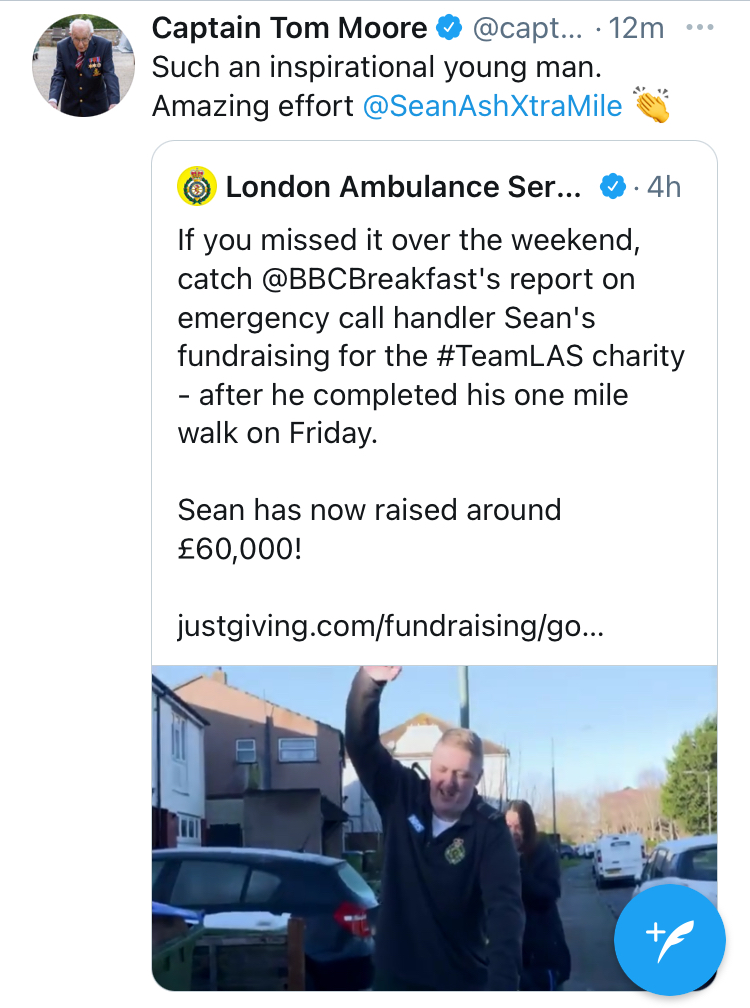 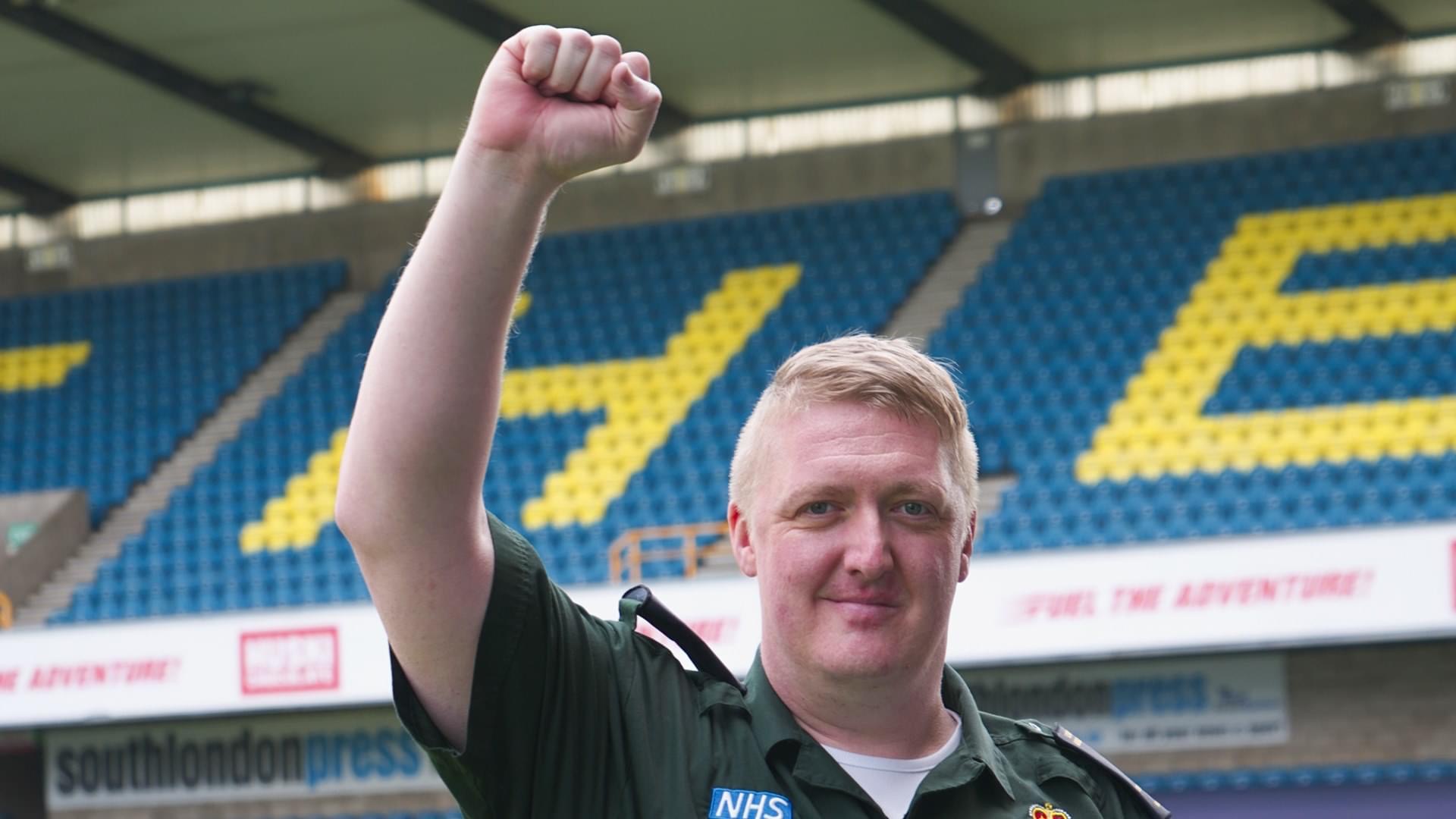 “So it got me thinking, ‘Why can’t we unite massive rivals like Millwall and West Ham too?’

“There is a huge history of problems between the clubs and while I’m all for banter it can sometimes get serious.

“But, as a 999 emergency call handler, it doesn’t matter to me if you’re a West Ham or Millwall supporter or whoever, I want to save your life.

“Having almost died last year and being left paralysed opened up a new perspective to me.

“And while we endure this pandemic, like we would a war, we should do so side by side – and that means Millwall and West Ham fans too.”

So much so that West Ham put photographs of them on their matchday screen at the London Stadium ahead of their game with Burnley.

Sean said: “I’m so glad West Ham and the owners of the London Stadium have agreed to join Millwall in supporting this.

“I believe it would be a fitting tribute to my cousins as well as uniting two footballing foes behind something that is much more important than football or rivalries.” 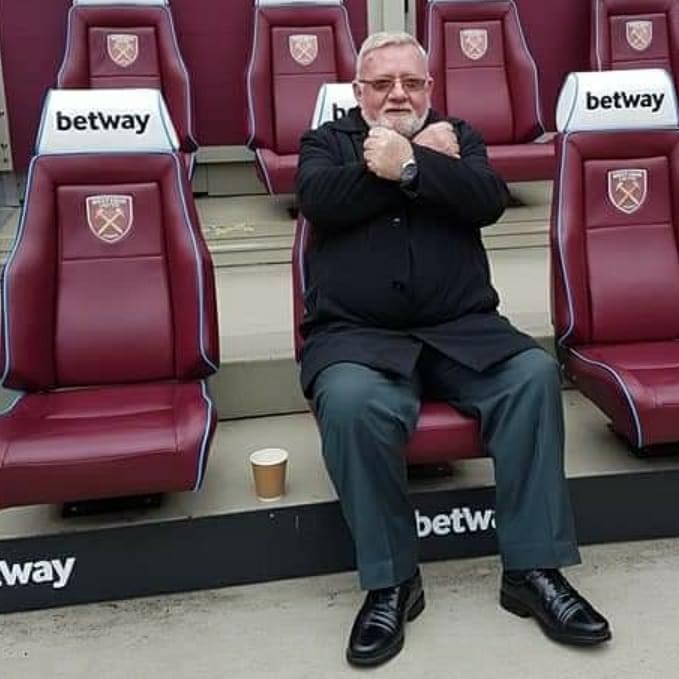 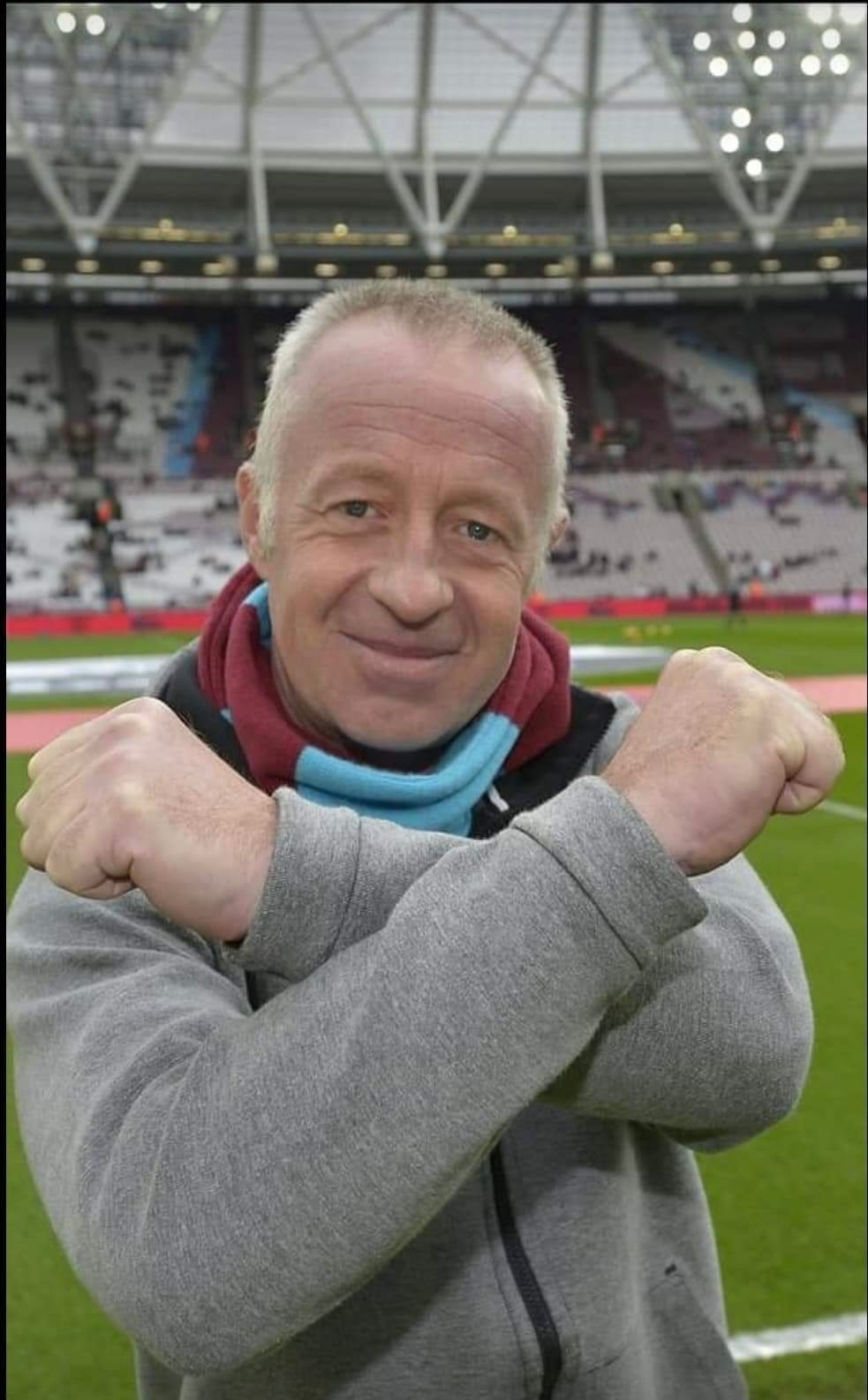 Sean started working for the emergency services last April during the peak of the pandemic.

And he saw first-hand how selfless and vital his emergency services colleagues were.

His own life was saved when it was discovered he had the rare Cauda equine syndrome – a severe spinal condition where all the nerves in the lower back suddenly became severely compressed.

He said: “I had a disc that came out of the socket in my lower back and it compressed the spinal cord so bad I have paralysis below my waist.

“I also have bladder and bowel dysfunction – as well as around my saddle areas.

“It all suddenly happened in August as I was driving to see my parents in Deal, Kent.

It would be a fitting tribute to my West Ham-supporting cousins as well as uniting two footballing foes behind something that is much more important than football or rivalries.”

“They say it’s rare but a lot of people suffer with it but just don’t know they’ve got it.

“Duncan James out of Blue is a recent example.

“Some people just get pain killers but there’s a 24 hour window to operate or you’re left completely paralysed.

“When I had my operation at King’s College Hosptal because I had a heart condition as well, there was a chance I could die.

“I was given two choices, ‘Don’t have the operation and be completely paralysed for life’ or ‘have the op but there is a chance you might not pull through.’

“I chose the latter and had to phone my children to say goodbye just in case. Thankfully, the operation was a success.”

Sean has slowly been on the mend since and amazed doctors by being able to walk with the aid of a zimmer frame.

And he incredibly managed to walk a mile – split into two segments – to raise funds for the NHS. 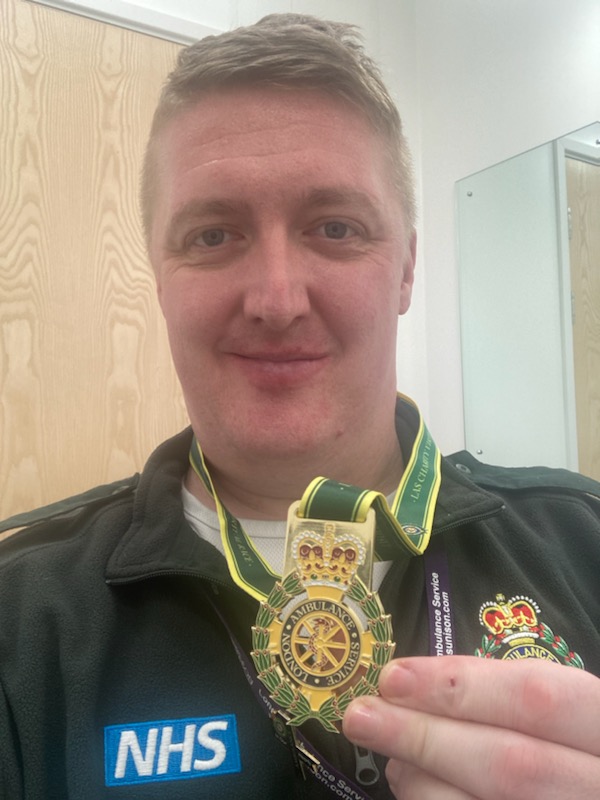 Last week he was back taking emergency calls without any assistance.

He said: “I’ve overcome so many odds to get to where I am today and when Sir Captain Tom uplifted the nation it really inspired me.

“And I thought if I just could start walking then I can do a challenge.

“If I could do something that was deemed impossible then that could give some other people hope.”

You have to applaud this inspirational man’s efforts and let’s hope Hammers and Lions alike put their rivalries aside for a common goal that surely everyone in the country supports.

BLACKBURN skipper Darragh Lenihan is certainly made of stern stuff.
On Friday night – for the Lancashire derby with Preston at Ewood Park – he was the only player on the pitch to brave the MINUS SIX temperature by wearing a short-sleeved shirt.

It was great to see most of the players deciding against wearing gloves that so many big-shot Premier League stars wear even when it’s mildly chilly.

But Darragh is certainly different gravy. No ice baths needed for him right now!

Aubameyang twisted his ankle after hat-trick in Arsenal’s win over Leeds but should be fit for Benfica, confirms Arteta