IT was not exactly Wayne Rooney against Fenerbahce.

Jadon Sancho was handed a first start for Manchester United but there was no hat-trick and an assist like Rooney delivered on his club debut in the Champions League 17 years ago. 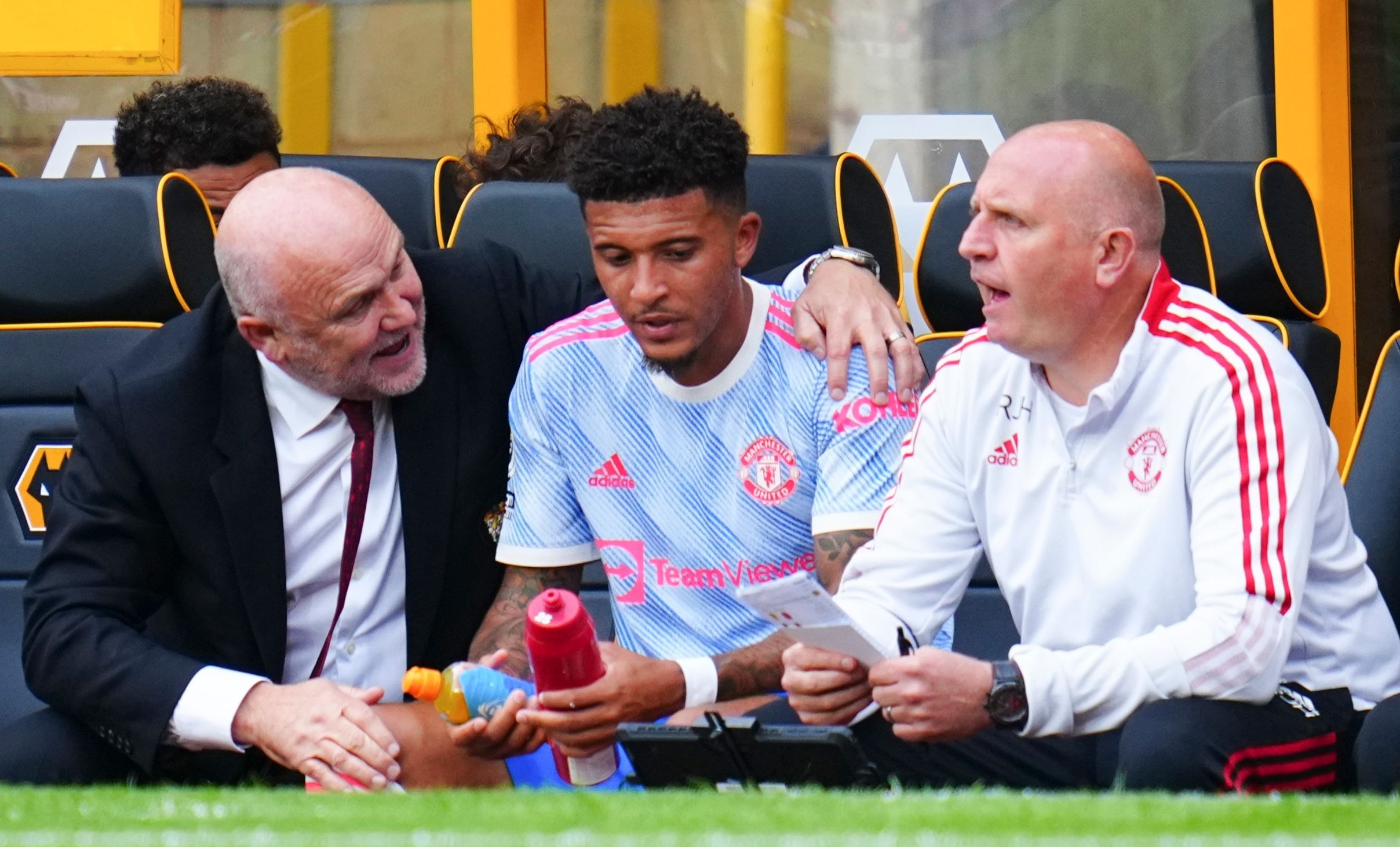 Mike Phelan was seen consoling Jadon Sancho after he was subbed off at MolineuxCredit: Rex

Unfortunately, there was not a lot of anything from the £73million summer signing although he nearly gifted Wolves an opening goal.

Sancho, 21, a fantastic prospect, will have many better days in a United shirt compared to this 72-minute run-out before being replaced by Anthony Martial.

Yet the arrival of Cristiano Ronaldo is still an added complication, but a fascinating one, for the England winger who thought he was the main attraction arriving at Old Trafford this summer.

Although so did everyone else.

Sancho has become the club’s third biggest signing behind Paul Pogba and Harry Maguire. United shirts with number 25 on the back will have been flying off the shelves until last week.

Because now, United’s fans yet to buy a shirt are now waiting to discover whether Ronaldo will be allowed to take over the number 7 shirt currently held by Edinson Cavani.

And overnight almost, Sancho has found himself overshadowed at his new club although maybe, as he looks to settle in, that is not necessarily a bad thing.

Even Sunday, there was not much razzmatazz surrounding someone making his full debut for the club after such a massive move.

The talk was still about someone currently in Lisbon rather than the Black Country.

Sancho, although indirectly, will be one of those players who will be affected by the arrival of Ronaldo purely because he adds to Old Gunnar Solskjaer’s offensive artillery.

Cavani and Anthony Martial will also feel the impact but Sancho knows, despite this fee, the competition for a prized starting place will be a lot tougher than when he was at the Westfalenstadion

In a 1-0 win for United over Wolves, it was a forgettable performance from Sancho.

He combined well enough with Luke Shaw but had little joy getting past Wolves right wing-back Nelson Semedo.

Sancho was fortunate to avoid playing a part in an early Wolves goal after a miscued header helped create a chance for Joao Moutinho but he failed to get an effort on target.

His first touch was good and some of his passing was crisp but it was either backwards or sidewards and he struggled to find space.

And in the second-half, he became increasingly isolated. Sancho could have few complaints over his substitution.

Eight minutes later, it was smiles all round as the winner was scored by Mason Greenwood who received a pass from Raphael Varane, someone who enjoyed a more successful debut.

Sancho is a lover of private jets, taking a videographer on holiday and eating gold steak at flash restaurants in Dubai.

It is the sort of behaviour which infuriated Dortmund and he will have to knuckle down.

But for a player at the start of his career, he will be unbelievably lucky to play alongside Ronaldo and hopefully, his professionalism will rub off.

Sancho broke all sorts of records in the Bundesliga and he could do the same in the Premier League.

Even so he has yet to convince England boss Gareth Southgate, even though Sancho will ink up with the national squad for three World Cup qualifiers.

He appeared just three times at Euro 2020, started just once, against Ukraine in Rome – and he missed from the spot in the shoot-out against Italy in the final.

Sancho has played 22 times for England but has yet to look entirely at home on the international stage.

In the past, he returned to Germany and in relative terms, sort of disappeared off the radar in England and his poor games for Dortmund were ignored.

But now as a Manchester United player – and a very expensive one – the demands on Sancho have now increased a notch.

And his first game for United was a reminder that he still has a lot of work to do.