PABLO MARI has begged Arsenal to let him remain on loan at Udinese next season despite his poor record with the Serie A side.

The Gunners signed the 28-year-old defender for £14million from Flamengo in 2020 after a successful loan period at the club.

Mari has begged Arsenal to let him remain on loan at Udinese next seasonCredit: Getty

But he failed to impress over the ensuing years at The Emirates and was subsequently shipped out on loan to Udinese in January.

The Spanish ace only made three appearances for the Gunners this season before heading to the Serie A.

And according to Gazzetta, via transfer guru Fabrizio Romano, Mari doesn’t want to return to his Gunners nightmare. 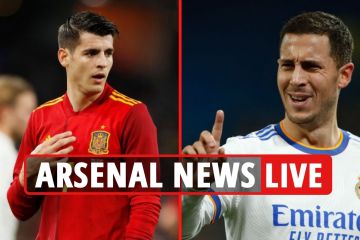 Despite only making eight starts for Gabriele Cioffi’s side since heading to Italy, Mari claims he’s never been happier and would like to remain at the club for another term at least.

But Romano states that as Mari’s loan move doesn’t include an option to buy, coupled with the fact that he’s contracted with Arsenal until 2024, his fate ultimately lies in the hands of the Gunners and Udinese.

Speaking about his future to Gazzetta, Mari said: “I’d like to stay in Serie A next season.

“I’m under contract until June 2024 with Arsenal – but I’m so happy here at Udinese.”

However, it remains to be seen if Udinese feel the same as Mari who has had a minimal impact at the club since his arrival.

Over the course of eight games his biggest contribution has been getting sent off once.

Plus, they’ve only managed to attain three wins and one clean sheet when Mari’s started with two defeats and three draws in the same time period.

But Arsenal’s recent injury crisis has exposed their lack of squad depth and Arteta may want to recall Mari next season to avoid a similar situation.

And if that’s the case, Arteta could possibly sway Mari’s mind as the centre-back previously professed that the Gunners head coach is the best manager he’s played under.