DEAN HENDERSON is set to join Nottingham Forest on loan after they agreed terms with Manchester United, according to reports.

The one-cap England stopper, 25, was stuck on the bench behind David de Gea at Old Trafford last season.

Dean Henderson is closing in on a move to Nottingham Forest after Man Utd reportedly agreed to their loan offer.Credit: Reuters

But with the World Cup on the horizon, United will seemingly allow Henderson to leave.

The Athletic claim United chiefs have agreed to the terms of newly-promoted Forest‘s loan offer.

The report states the City Ground side are willing to take on Henderson’s full £100,000-a-week wages for the entire 2022-23 season.

Henderson had been on Newcastle’s radar ahead of a potential summer swoop. 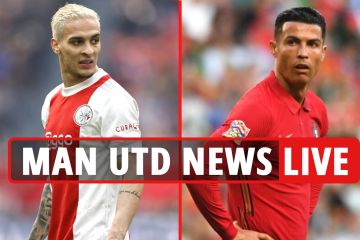 But the newly-rich Toon have turned their attention to England stopper Nick Pope following Burnley’s relegation.

However, he failed to play a single game in the Premier League as he was left to rot on the bench behind De Gea.

Forest, meanwhile, are eager to bring in a first-team quality goalkeeper as they sweat on the future of Brice Samba.

The Congolese star, 28, was a key figure in Steve Cooper’s side during their promotion campaign.

But he has revealed he won’t sign a new contract as he feels “under-appreciated” by the club.

On Sunday, SunSport revealed Forest offered Samba a contract worth more than double his current salary at City Ground.

However, Samba – who has only one more year left on his current deal – is keen to return to France having joined from Caen in 2019.

The keeper has made 133 appearances across all competitions during his three-year stint at the City Ground, culminating in helping the side promotion to the Premier League following a 23-year exile.

He also played a crucial role in the club’s return to the top flight as he saved three penalties against Sheffield United in the play-off semi-final.

The ex-Marseille player also kept a clean sheet in the final against Huddersfield.

xQc wins $825,050 during gambling stream – immediately loses it all