IF A MANAGER IS SACKED BY FOREST … IS IT NEWS?

The Fiver isn’t quite old enough to remember the days when Nottingham Forest conquered Europe – and then conquered it again – but it does recall late-era Brian Clough, the admirable 1990s endeavours of Frank Clark, the regrettable David Platt interlude and the Paul Hart renaissance of the early noughties. Luminaries of the beautiful game who have also had a crack at managing Forest since Clough bowed out in 1993 include Ron Atkinson, Billy Davies, Martin O’Neill and Billy Davies.

Keeping track of the ins and outs through the City Ground revolving door has become increasingly difficult, mind. The Fiver believes Steven Reid’s promotion to interim manager, following the dismissal of hapless Chris Hughton, makes it 21 different appointments in the last 10 years, including caretakers. But even the club’s fans have lost count at this stage, let alone Wikipedia. As their Midlands rivals Leicester prepare for Big Vase action against Napoli, proving what decent owners can achieve, Forest stumble on, a shambles of a club wrapped in permanent crisis, a running joke of an organisation and a long-running experiment in what happens when the wrong people take over. If a behind-the-scenes documentary of Forest over the past decade ever got made, it would surely paint an even grimmer and more comical picture than that one about QPR under Flavio Briatore.

As TV’s Mark Lawrenson used to observe from the Football Focus sofa, there’s obviously something going on behind the scenes that’s not quite right. There’s quite a bit of stuff in front of the scenes that doesn’t look great, either, with Forest propping up the Championship table with a solitary point from seven matches. And if Clough put Forest on the map, then the current owner Evangelos Marinakis – along with certain predecessors – appears to be trying to rub it out again. Maybe he’s attempting to tear the relevant page out of the road atlas entirely. But what’s the answer? How do Forest extricate themselves from this unholy mess, vault the club off the foot of the second tier, and back into the top flight like the good old days of Stan Collymore and Bryan Roy? If The Fiver had the answers, we wouldn’t be sitting here writing this, would we? One thing we can say with certainty: appointing Steve Cooper and firing him in six months isn’t going to clean up the mess.

Big Vase is back, baby! Join Tom Davies and Will Unwin from 5.45pm BST for hot clockwatch coverage of the opening round of group games.

“It did surprise me. I’m not sure what that’s got to do with him. He doesn’t understand the difficulties that some people might have getting to a game at the Etihad on a Wednesday evening at 8pm. They’ve got kids to think of, they might not be able to afford it, there are still some Covid issues about … I don’t see why he comments on it. He’s absolutely the best coach in the world but, in the nicest possible way, I think maybe he should stick to that” – Kevin Parker, general secretary of the Manchester City official supporters’ club, upbraids Pep Guardiola for calling on more fans to turn up to home games after their 6-3 win over Leipzig.

This picture essay on the final days of York City’s Bootham Crescent is properly lovely.

“As a lifetime Evan, may I lodge a counterpoint to Nick Shimmin’s objection to Everton being called ‘The Ev?’ (yesterday’s Fiver letters). Our side of Evs – captained by Jonny Evans in the backline and with a frontline starring Preston’s Ched Evans and Westworld’s Evan Rachel Wood up front, anchored by Marvel’s Captain America Chris Evans between the sticks – would consistently finish mid-table, just like The Ev on Merseyside. After all, do Everton have a vibranium shield to stop shots in goal or a true gunslinger up top?” – Evan Williamson.

“Re: yesterday’s Quote of the Day. Is that what Phil Brown looks like nowadays? He looks like Mark Hamill playing Phil Brown in a biopic” – Oliver.

Send your letters to [email protected]. And you can always tweet The Fiver via @guardian_sport. Today’s winner of our prizeless letter o’ the day is … Oliver.

Reece James has appealed for help after his medals were stolen in a burglary. “I am appealing to all my Chelsea and England fans to help identify and turn in these low-life individuals, who will never be able to rest easy,” he said.

Despite a brief bump in the road before coming back to beat Milan 3-2, Jürgen Klopp reckons Liverpool’s Big Cup return in front of a capacity Anfield crowd was everything he had hoped for. “It was a brilliant game, very exciting and very entertaining with 10-15 minutes where we lost a little bit of the plot,” he whooped.

A Fifa-backed survey has, remarkably, revealed that fans are backing Fifa’s plans for a biennial World Cup.

England are to host an annual four-team women’s invitational tournament that will kick off in February 2022 and run for at least three years, with Germany and Spain already signed on for the first edition.

Burnley boss Sean Dyche has signed a new four-year deal with the club. “I have a strong affinity with the area and our supporters after so many years here and I look forward to putting in the hard work needed to keep the club moving in the right direction,” he growled.

Meanwhile, Newcastle’s Steve Bruce is having a less pleasant time of things. Still. “Look, it’s a challenge at the minute,” he tooted. “I’ve said now since I walked through the door two years ago, I’m not going to be everybody’s cup of tea, but I will, with my experience, hope that I can keep the club just ticking along.”

And after Stoke and Barnsley coaches got involved in scenes that nobody likes to see (but that they really like to see), resulting in three red cards, both managers have had their say. “I’ve no issue with my staff sticking up for one another,” roared Michael O’Neill, while Tykes counterpart Markus Schopp sighed: “I think it was unnecessary.” 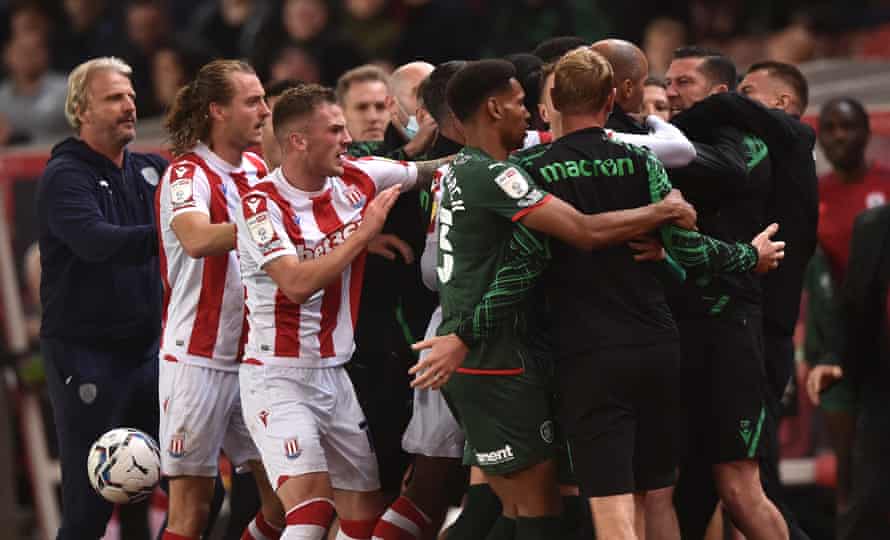 The rise of set piece coaches in football. By Richard Foster.

Want to know how West Ham shed their dysfunction to deliver on a promise of Europe? Then it’s your lucky day.

Karen Carney on Demarai Gray’s impressive start to the season at Everton.

Estate agent swamped as £1million home is accidentally listed for £1