Manchester City super-fan Gallagher grinned and grimaced as he listened before firing back: “Hey, mate – that’s worse than one of your own goals.” 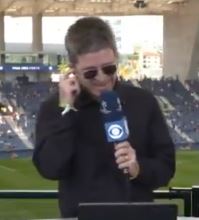 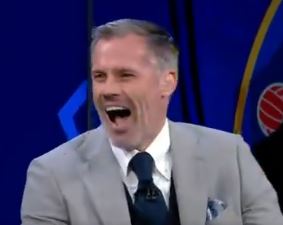 The Oasis singer was in Porto for Saturday night’s Champions League final, while Liverpool legend Carragher sung him the Reds’ anthem from the studio.

And from Gallagher’s reaction, it’s unlikely Carra will be invited to perform as a guest act should Oasis return to the concert world.

Pundit Carragher put his arms out wide as he bellowed out, opera style: “When you walk through a storm, hold your head up high..”

But that was as much of the famous song that Gallagher let him sing before intervening.

On the biggest night in City’s history, he cut short the biggest moment in Carra’s singing ‘career’ with his stinging (not not singing) rebuke – the comparison with own goals.

One or two fans on social media seemed suspicious the stunt was staged.

But one replied: “Nah man Noel is genuinely funny.”

Others, though, were disappointed that CBS chose Gallagher – 54 on the day – to ‘represent’ City supporters.

This tweet typified that view: “Is the no other Man City fans on this planet than Noel Gallagher? Insufferable.”

But at least the final itself will Live Forever in the memories of one club at least as Premier League champions City battled Chelsea, who led 1-0 at half-time.

Who is Beetroot on The Masked Dancer UK? All the clues, hints, theories