ARSENAL’S Europa League semi-final is in the balance after a bonkers battle in Spain.

The Gunners took on Unai Emery’s Villarreal and endured a nightmare start falling 2-0 down within 29 minutes. 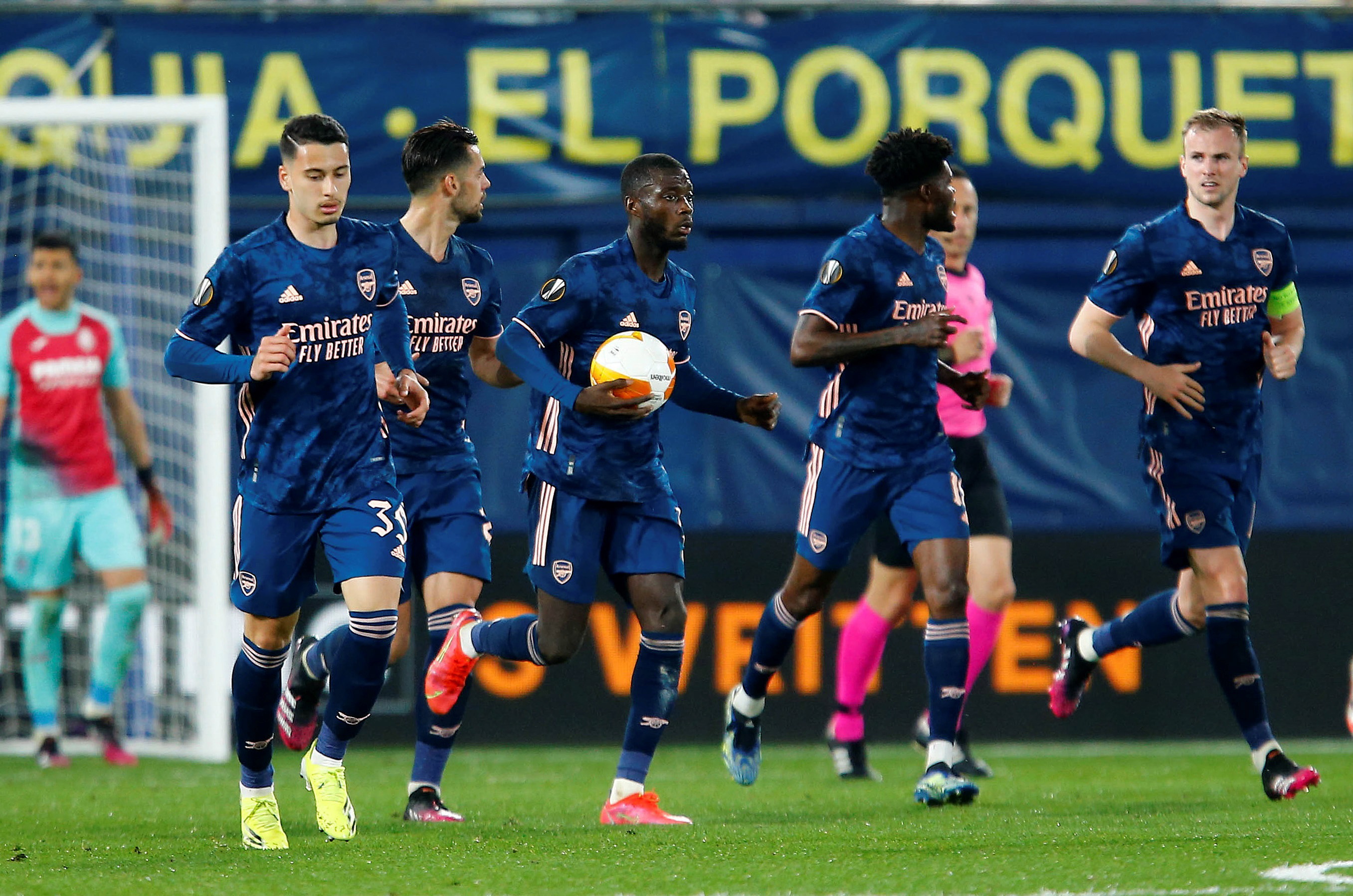 Nicolas Pepe hauled Arsenal back into the Europa League semi-final with a cool penaltyCredit: EPA

Manu Trigueros fired home in the fifth minute before ex-Real Madrid defender Raul Albiol added a second from a corner.

Dani Ceballos made things worse with a second yellow but Nicolas Pepe’s converted penalty and Etienne Capoue’s red card mean it is tantalisingly poised ahead of next week’s second leg at the Emirates.

The stopper had no chance with either goal – especially the first which was drilled low into the corner.

Made a smart stop on the hour mark to limit the damage and then a crucial save to deny Gerard Moreno when he ghosted between the centre-backs which could prove massive by the end of the tie.

The Englishman was once again selected ahead of Hector Bellerin and Cedric Soares and justified his place.

Got forward well and offered an outlet down the right – but had no one to aim for with his crosses – and was solid defensively, too. Headed over from a late corner.

Given the captain’s armband again but could not inspire his team to victory. Was blocked off for the second goal so hard to blame him.

Instead, seemed to spend most of his evening complaining – usually to the referees – and then skewed a snapshot well wide as the Gunners looked for a foothold.

Could not get his head on the corner which ended up in the back of the net.

Did not look commanding at the back as Villarreal managed six shots on target.

Oh how Arsenal fans are missing Kieran Tierney, who was deemed not ready to be involved at all despite travelling to Spain.

An ever-so-exposed Xhaka looked terrified as Samuel Chukwueze waltzed his way into the box and set up the opener.

Juan Foyth pushing on also made things tricky, especially with a lack of defensive cover, before hobbling off.

The Spanish midfielder was certainly at the thick of it for Arsenal throughout his 57 minutes on the pitch.

Ceballos stood there like a lemon unable to get a foot in before the opening goal, then improved as he started finding his passing range and threading some neat through balls.

But already on a booking and on the edge, he finally did get his foot in – on top of a Villarreal player after over-running the ball and off he went.

Not at his best in the middle of the park for Arsenal, Partey is missing having Xhaka alongside him.

Main fault was switching off at the back post to allow Albiol to run off him and prod home unchallenged for 2-0.

Was having a quiet game by his usually lively standards.

But then suddenly a turn of pace into the box drew a trip for the penalty which could have changed the tie.

Moments later, ex-Spurs man Capoue went flying in on the teenager and got his marching orders.

Tried to unlock the Villarreal defence but struggled to make his mark on the game as he has in recent weeks.

Was taken off midway through the second half for Gabriel Martinelli.

Similar to Odegaard, could not quite take the game by the scruff of the neck.

Did take a whack and had his knee strapped but thankfully no serious damage was done.

The Ivory Coast winger was Arsenal’s most dangerous player from the first whistle, causing problems for Juan Foyth.

For the second time in a week, thought he had won a penalty at 0-0 but VAR chalked it off for a blatant handball in the build-up.

Put that disappointment behind him to step up from 12 yards to stroke it down the middle for a crucial away goal.

Gave Arsenal a bit more of a focal point in attack after starting without a recognised striker and looked more threatening when he came on.

Came on for Saka with five minutes to go and led the line with Martinelli moving out to the left.

Picked up a booking and then almost scored a dramatic equaliser in injury time but his angled shot was saved.

Brought on in injury time.

Also came on for final seconds.

Primark launches massive new baby range of toys, clothes and even a cute rocking sheep with prices from just £1