A SHORT corner did not lead to turning the corner – but Stephen Kenny can see around it again.

A 1-1 draw with World Cup hosts Qatar in a friendly will not get pulses racing and extends Kenny’s winless start as manager to 11 games. 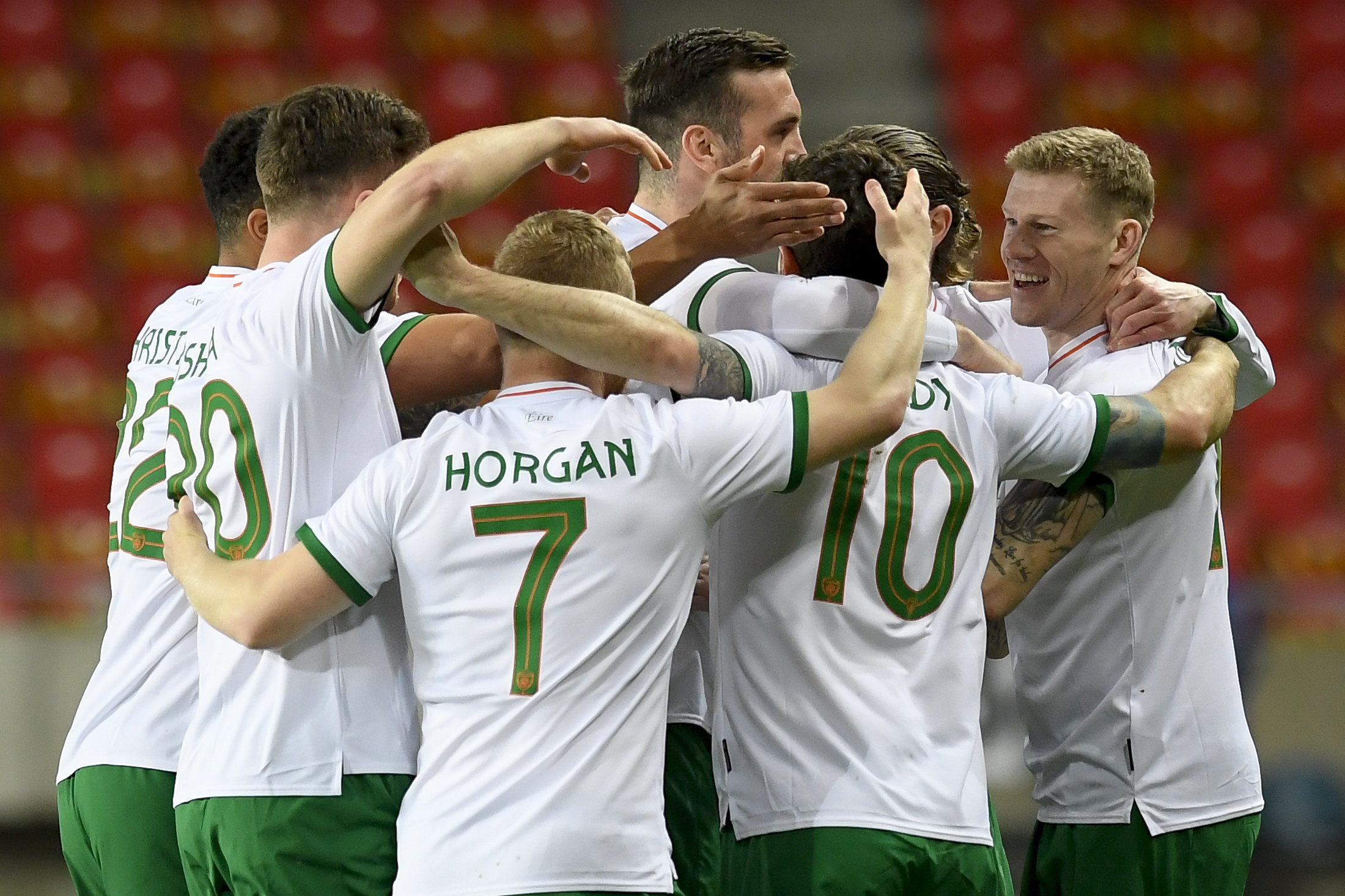 Ireland players celebrate after James McClean’s early goal – but the Boys in Green could only draw 1-1 with QatarCredit: EPA 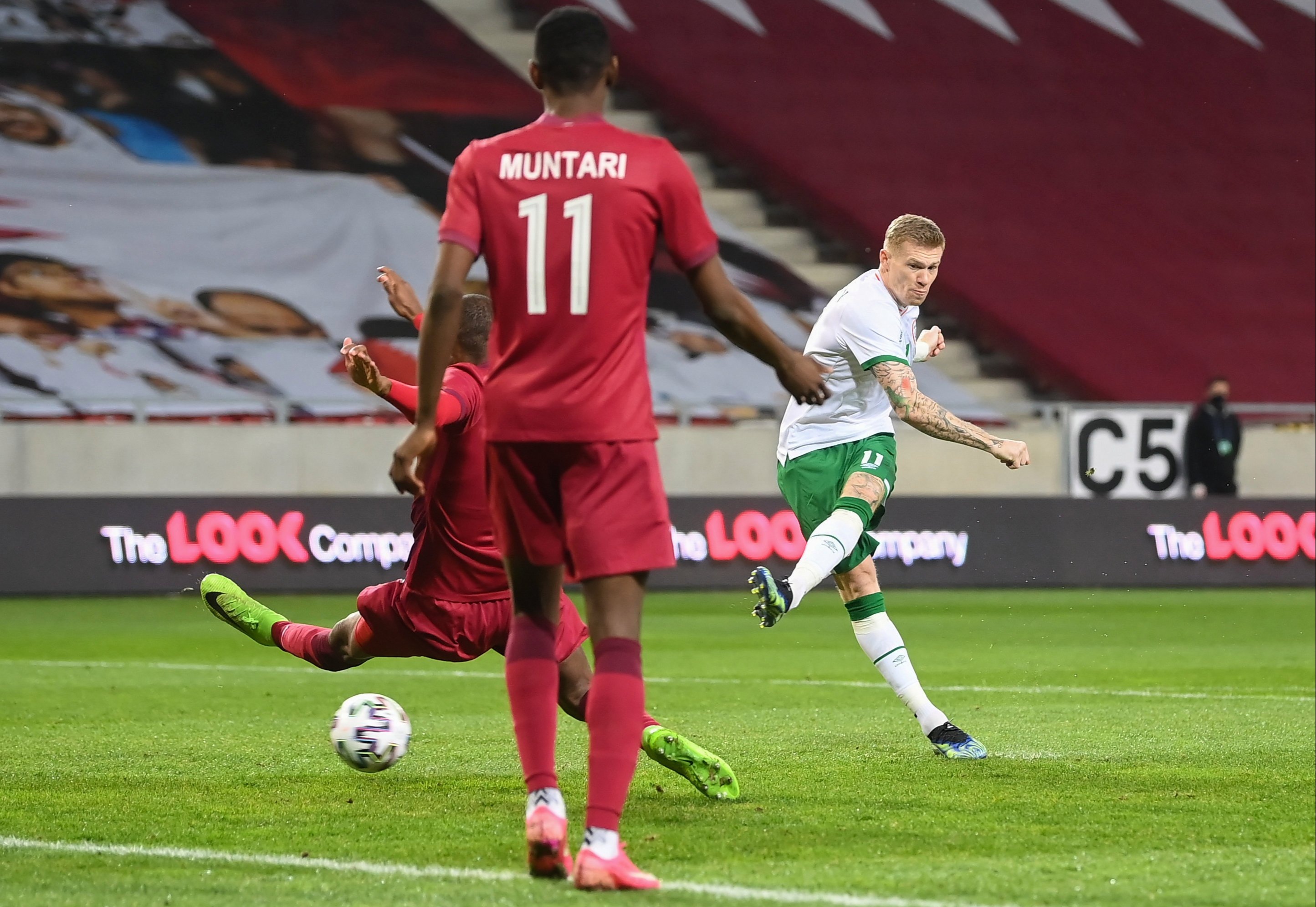 McClean scored his first goal since 2017 for Ireland

But with the manager in need of something after Saturday’s shocking loss to Luxembourg, he will take the green shoots of recovery in Debrecen.

But it was cancelled out early in the second half by Mohammad Muntari.

Ultimately it meant that Ireland did not win. Again.

No wins will be the drum beaten every week until this team and this manager gets one, and means questions over Kenny’s position will get louder and louder.

The sluggish second half showing did little to raise spirits too before Callum Robinson and Josh Cullen both had late chances to win it.

But the opening period showed promise, Ireland’s players stood up to be counted, and there was a reaction to the Luxembourg loss against a side that was a banana skin.

Qatar are the reigning Asian champions and drew with Paraguay, lost 1-0 to Colombia, and 2-0 to Argentina at the last Copa America. 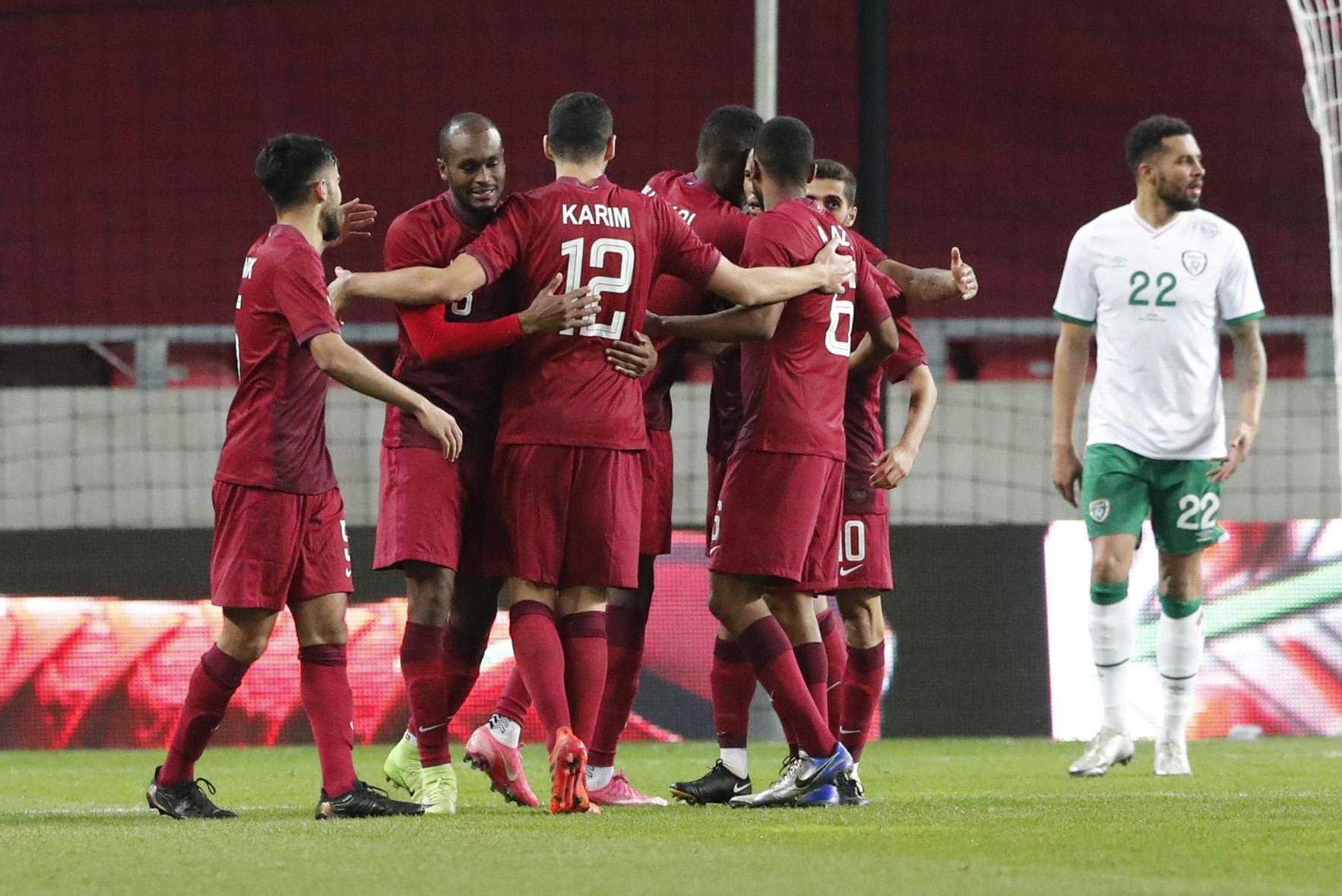 Mohammed Muntari is mobbed by his Qatari team-mates after equalisingCredit: Reuters

Nowadays, they train together regularly with the Qatari FA virtually putting them together as a club side to build for the World Cup next year.

That they put out a full strength team – nine of the 11 faced Lionel Messi and co two years ago and all 11 faced Luxembourg last week – suggested they saw Ireland as a scalp.

By contrast Kenny made eight changes from the loss to Luxembourg with Shane Duffy, Jeff Hendrick, Brady, McClean and Shane Long back in the line-up.

And whether it was wanting to prove they should be starting anyway, or memories of Saturday, it was more like Ireland from the start.

The sight of Seámus Coleman as the furthest man forward in open play after three minutes set the tone as the visitors began on the front foot.

Hendrick had an early shot blocked before Brady had an effort deflected away for a corner that led to Ireland’s opener after four minutes.

The goal was straight off Chelsea’s training ground, as new coach Anthony Barry – whose day job is at Stamford Bridge – made his mark.

Barry is known for being a set-piece expert and has filled the void left by Damien Duff on the coaching staff.

And he showed one of the things he brings to the staff with a smart move that caught Qatar out.

Daryl Horgan received his short corner back from Robbie Brady and fed the ball low to the penalty spot where McClean had peeled away to fire home with the aid of a deflection. 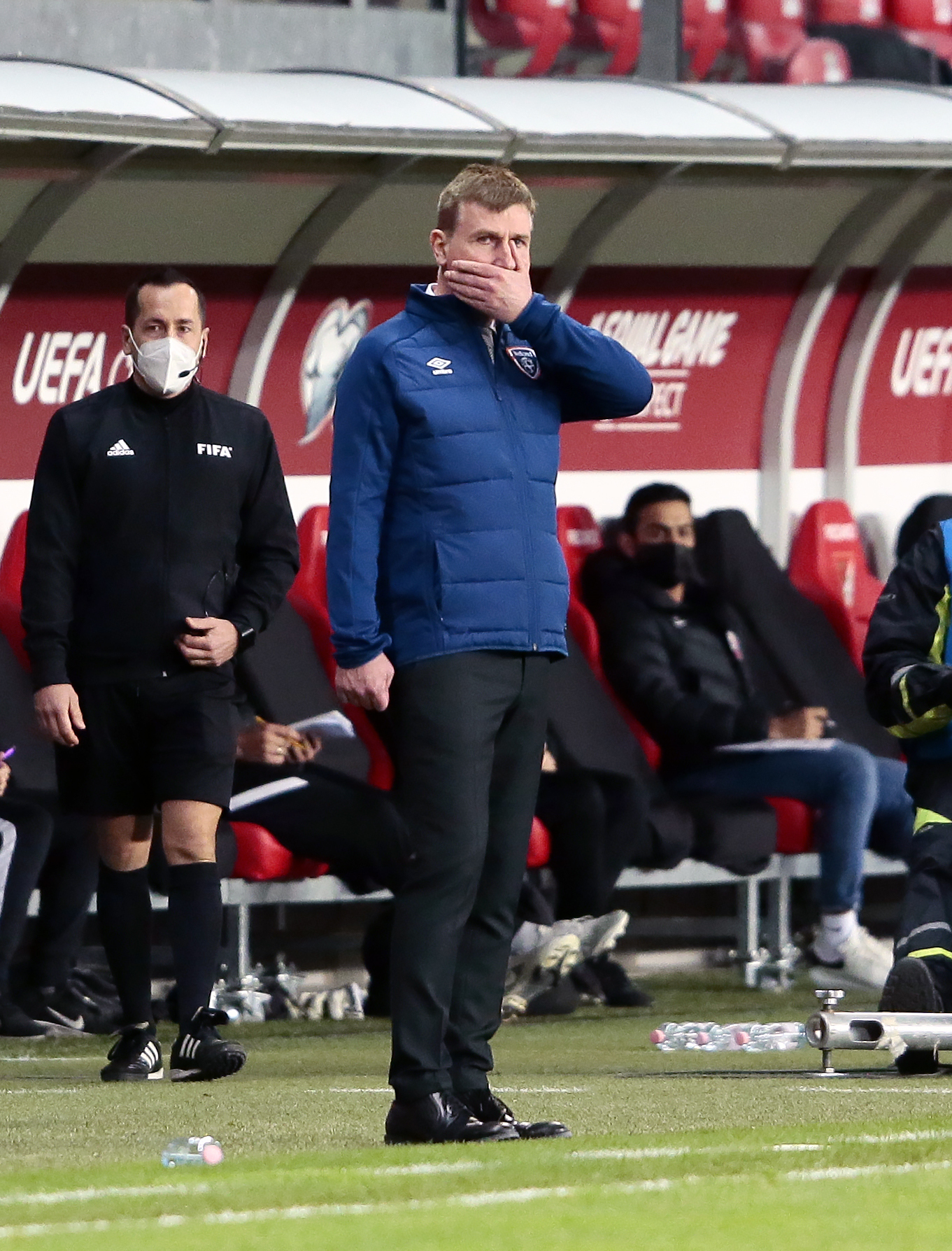 Stephen Kenny is now without a win in his first 11 games in charge of IrelandCredit: PA

The celebrations from the players, and on the bench where coach Barry was given the credit, looked like a weight had been lifted.

And so much of the first half gave reasons for optimism.

Out of possession, Ireland were organised and compact. On the ball, they mixed up keeping the ball and more direct as Long caused problems with his runs.

Early on, he held the ball up and whipped in a cross that Tarek Salman almost turned past his own goalkeeper Saad Al Sheeb.

And later, he should have done better when he was slipped in by Cyrus Christie but his early shot did not fool the goalkeeper who made a smart save.

Christie then went close from long range after Ireland had smartly gone direct when Qatar pressed up as Hendrick and Molumby controlled the midfield.

Yet the game was still too open and, despite Ireland’s good work defensively, they were still coughing up some chances.

Gavin Bazunu was dominating his penalty area, but an early trip outside it almost cost him when he fouled Portuguese born wingback Ro Ro as he came out to intercept.

Referee Balazs Berke initially pointed to the penalty spot but was correctly overruled by his assistant. And Bazunu never let it faze him as he never put a foot wrong again.

But there were still moments, Almouz Ali had a header fly inches wide from a peach of a cross by Ro Ro while Bazunu had his angles wide to deal with a later shot.

Bazunu was then glad of Shane Duffy’s intervention to deflect a Muntari shot one minute before half time when Daryl Horgan was caught in possession.

But two minutes after the break, Ireland were finally undone.

Ali broke forward and fed Muntari who, with Jayson Molumby not close enough, had time to turn and fire a shot beyond Bazunu from 20 yards.

It was a terrible start for Ireland and, given the current run, could have got a whole lot worse against a better team.

But Ireland dug on, Qatar battled, and the second half was very much as billed beforehand – an international friendly between two sides that are unsure of themselves.

Qatar had few chances as any efforts were merely catching practice for Bazuni.

But the same can be said for Ireland as Al Sheeb was hardly troubled by a weak left foot shot by Christie and a snap shot from Robinson.

Late on, it was like a switch went off in both sides that the end was in sight as both lifted it again.

Muntari shot wide – though Duffy throwing himself in front of him played a big part – with an opportunity that could have won it for Qatar.

But Ireland had the better of the two teams as Robinson fired wide after Al Sheeb had misjudged a Christie cross.

And, in injury time, substitute Cullen slipped in behind the Qatar cover only for Al Sheeb to acrobatically keep out his header from a Christie cross.

A goal then would have earned Kenny his first win and helped him turn the corner.

Instead, he will lean on the short corner routine as evidence the turn is coming.