HARVEY BARNES handed Jesse Marsch a lesson in how cruel the Premier League can be.

But if the American had done his homework he probably half-expected it!

Barnes found the bottom corner with a well-placed shotCredit: Getty 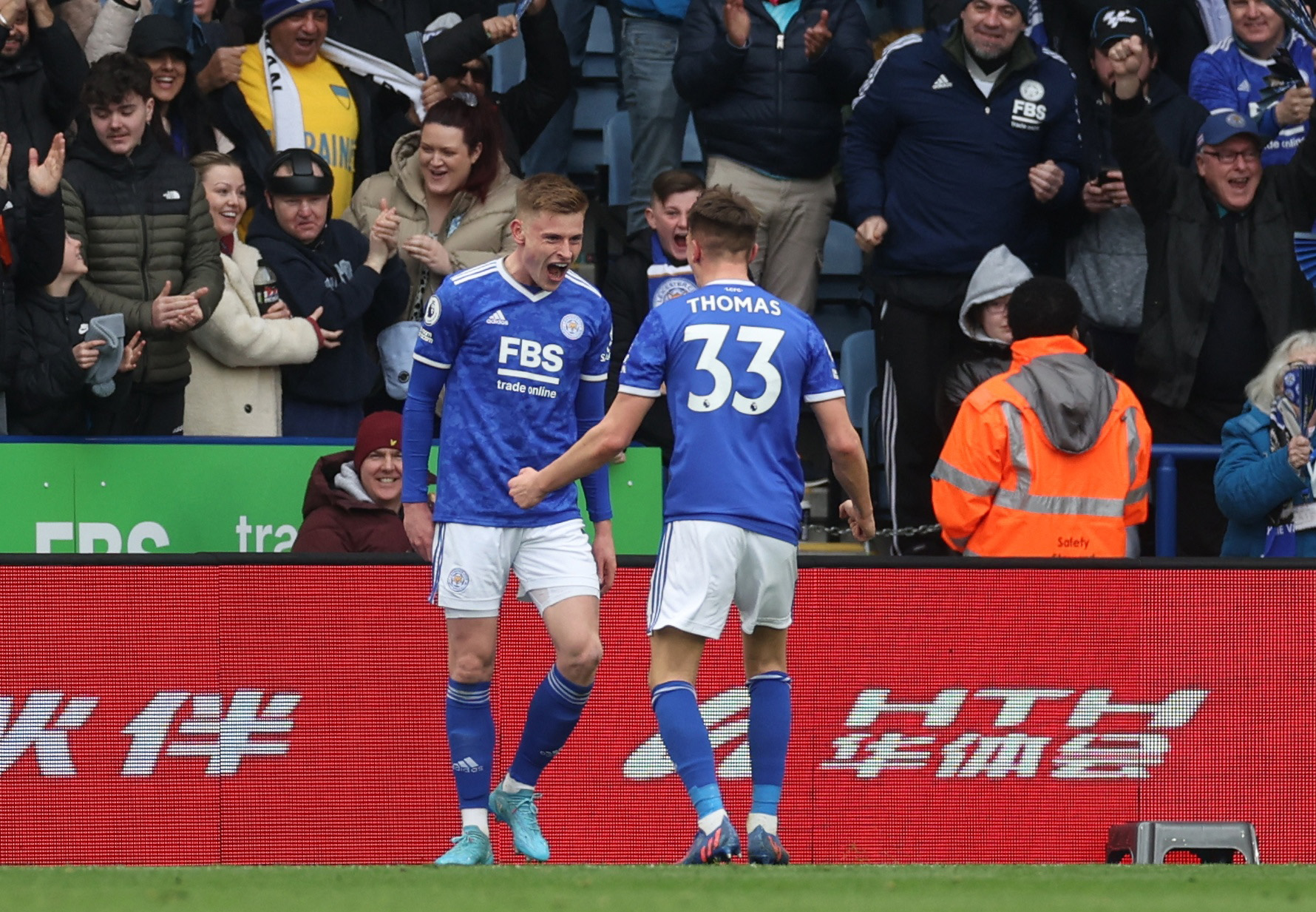 Barnes has now scored eight goals in all competitions this seasonCredit: Reuters 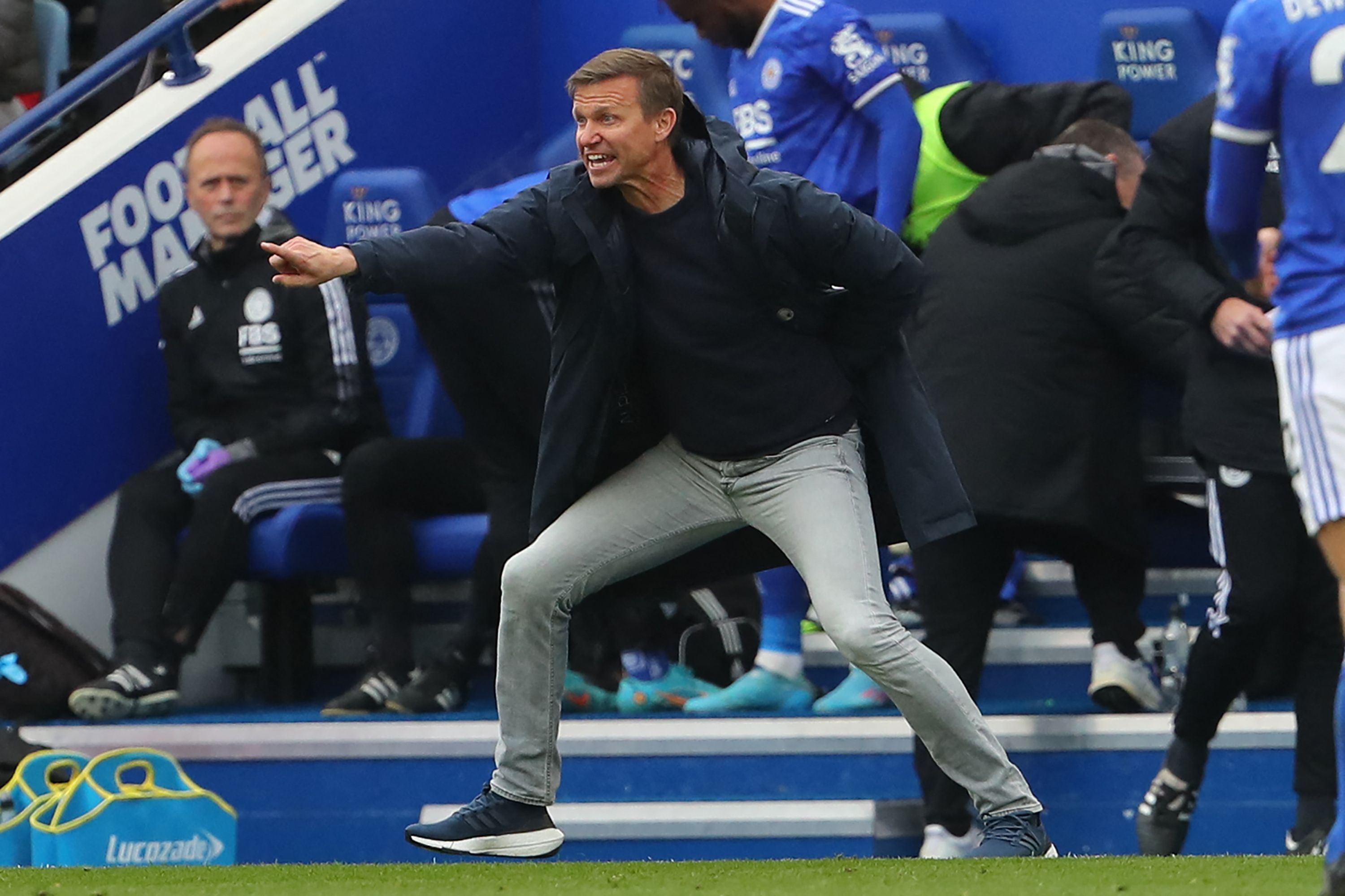 Marsch began life in the Premier League with a defeatCredit: AFP

Barnes celebrated his 100th appearance for Leicester by scoring against a club he has history with.

Unfortunately for Marsch it’s been all bad for Leeds and all pretty much plain sailing for the Leicester winger who has played Leeds four times now – and scored every time.

That puts the England winger in an exclsuive club alongside Alan Shearer and Thierry Henry as the only other players to have scored in four consecutive Premier League matches against the Whites.

Just when it looked as if Leicester couldn’t hold out any longer under sustained Leeds pressure, Brendan Rodgers made a couple of tweaks on his 150th match in charge of the Foxes.

One of them was to send on Kelechi Iheanacho for a weary Jamie Vardy and it paid off spectacularly when Barnes combined with the Nigerian to sweep a low shot beyond Illan Meslier.

It was a rare moment of joy for a Leicester side who had Kasper Schmeichel to thank for keeping them in the game until then.

At the final whistle Marsch pulled his players into the centre circle for a full-time huddle.

In truth they needed a full-time cuddle because this was a horrible way for Marsch to kick off his new career as a losing manager.

However he got a positive response from Leeds’ travelling army who made it clear they intend to keep Marsching on together.

That’s the way it has to be for Leeds United for the remaining 11 games of the season.

Leeds’ new American boss admitted he had one million thoughts flooding through his mind when he took charge on Monday.

He probably has a few hundred thousand more this morning after his first 90 minutes in charge.

Marsch arrived with one simple mantra for his struggling squad: “Play for the fans – fight for the fans and be fearless.”

They did all that and more yet still came away with nothing.

Marsch arrived at the King Power looking to stop the rot after Leeds had slumped to five defeats in their last six games – form which had left them just two points clear of Burnley in 18th.

The American has talked a lot of sense since his whirlwind arrival.

Now it was time for him to walk the walk.

By half-time he had already shown early encouraging signs of improvement – and hit one small but significant target. 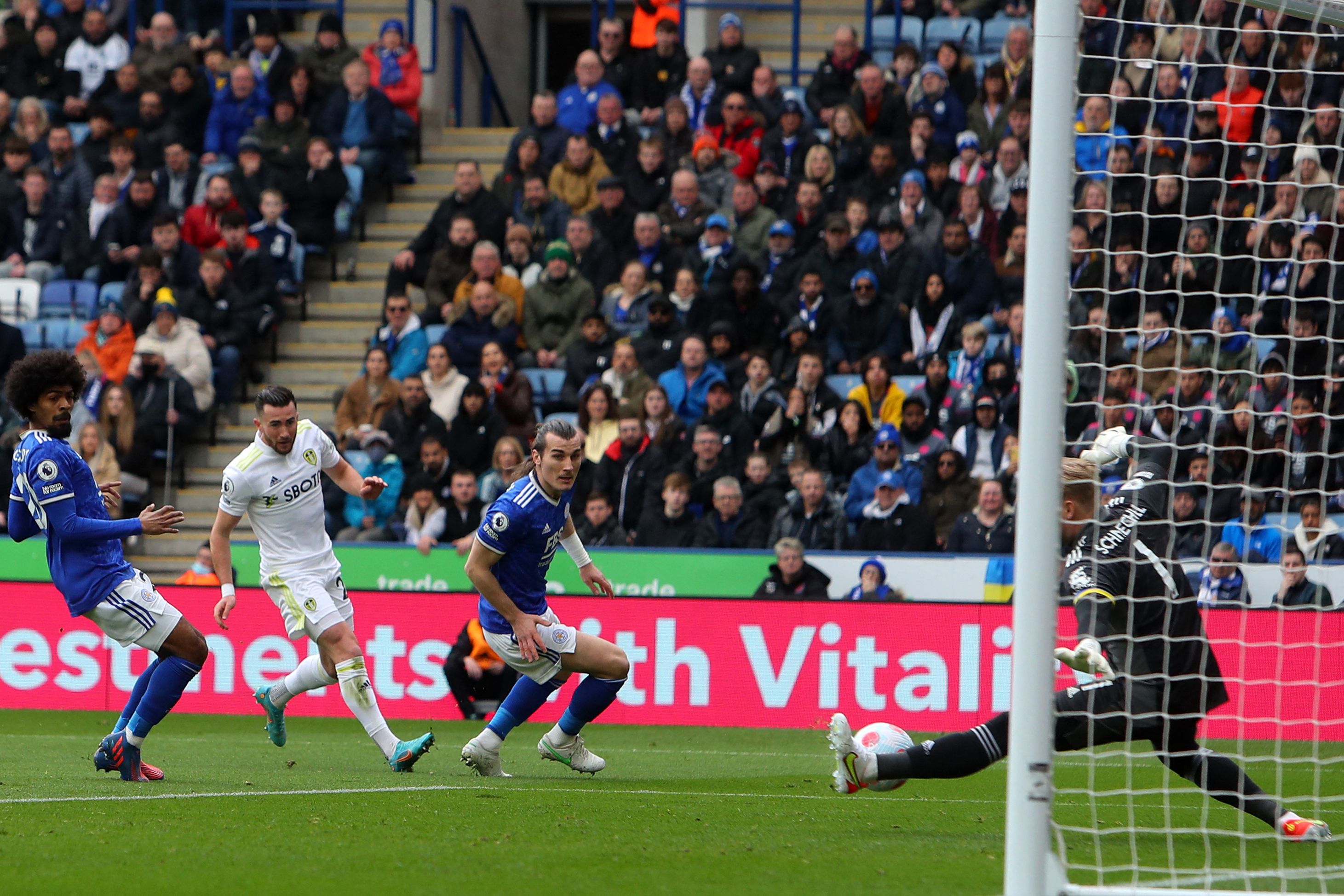 But they managed to reach their first base camp unscathed as Meslier kept his goal intact.

In fact, Marsch would have been a little disappointed his side weren’t in front at the break.

The visitors carved out nine shots on goal to Leicester’s three but couldn’t find a way past Foxes skipper Schmeichel.

The Danish keeper hit a club landmark on his 461st appearance for Leicester, overtaking fellow goalie Mark Wallington and Hugh Adcock to sit third in the club’s all-time appearances chart.

And he proved his class with a couple of excellent early stops as Leeds started on the front foot.

A sloppy touch from Youri Tielemans from a Foxes throw-in was pounced upon by Jack Harrison who fed Dan James within two minutes.

The Welsh speedster burst forward and drilled in a low angled shot which Schmeichel did well to tip beyond his far post.

Luke Ayling then headed a Harrison corner over before Kasper came to the rescue again, blocking Harrison’s low shot with his outstretched boot.

As Leeds pressed hard Rodrigo blazed a Harrison cutback over from 12 yards, then another teasing Harrison delivery found no takers.

Leicester were hanging on grimly and Caglar Soyuncu did brilliantly to block Junior Firpo and then Raphinha after a wayward Tielemans header put his side in trouble.

In a rare respite Ndidi powered in a header from Marc Albrighton’s corner but Meslier managed to gather at the second attempt.

And it was Leeds who finished the half on top as Rodrigo leaned back to sky over from 12 yards as Marsch clenched his fists in frustration. 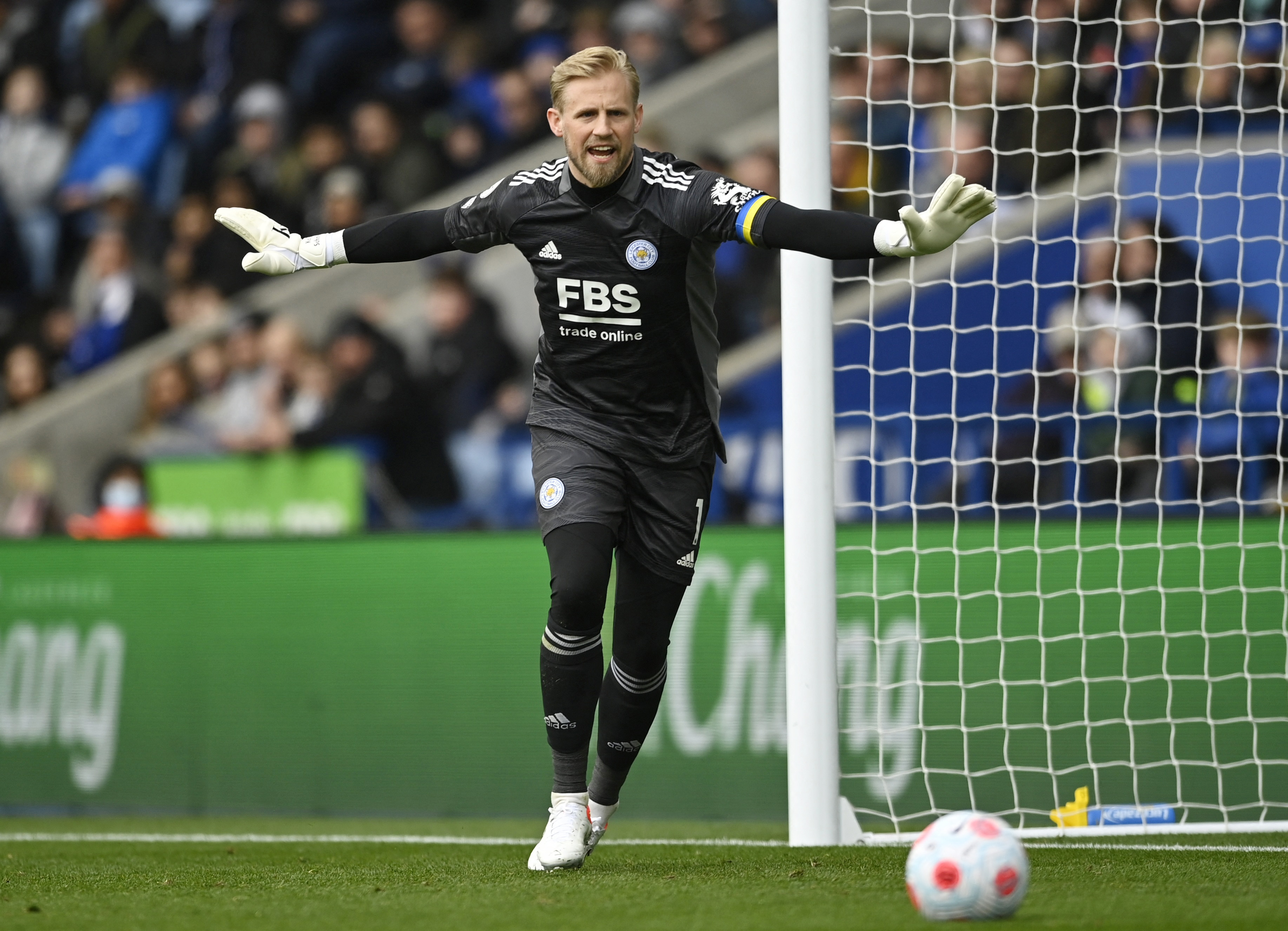 Schmeichel produced an outstanding display to keep Leicester in the gameCredit: Reuters

It didn’t get any easier for the new man after the break as Leeds continued to turn the screw without scoring.

A James shot ricocheted off Raphinha and flew wide. Then a Harrison shot clipped Amartey on it’s way over, before Schmeichel reacted brilliantly to beat out Rodrigo’s flashing header.

As Leeds grew in confidence, Marsch’s frustration grew too.

And he held his head in his hands on the hour when Raphina somehow failed to convert a Firpo cutback as Schmeichel amazingly blocked his shot from four yards out.

Rodgers had seen enough and made a double substitution, sending on Iheanacho and Ademola Lookman for the tiring Vardy and Hamza Choudhury.

It was a positive move and it had an almost instant pay-off moments after Marsch had replaced Stuart Dallas with Joe Gelhardt.

Against the run of play the Foxes struck to slice through the Leeds defence.

Tielemans fed Harvey Barnes who pinged a speedy one-two off Iheanacho and then opened up his body to side-foot beyond Meslier as Ayling failed to block with a despairing slide.

Just prior to the only goal of the game, Leeds thought they had a good shout for a penalty.

Gelhardt fired in a shot from near the penalty spot which appeared to clip Albrighton’s hand and Leeds were awarded a corner.

However a VAR check proved no contact was made by Albrighton – although Leeds got to keep the corner as ironically VAR decided ref David Coote hadn’t made a clear and obvious error.

It was cruel luck on Leeds and Marsch who deserved better but they will be hugely heartened by their vastly improved performance.