MOST Manchester United stars believe Cristiano Ronaldo should NOT play for the club again, reports claim.

In a bombshell interview with SunSport columnist Piers Morgan, Ronaldo revealed he feels betrayed by the Red Devils.

The majority of the Man Utd squad don’t think Cristiano Ronaldo should play for the club againCredit: Reuters

And stars at the club don’t see any way back for Ronaldo after his comments, according to The Times.

It’s reported the majority of the players believe the Portuguese ace should never play for United again.

They aren’t believed to be expecting him to return to the squad after the World Cup. 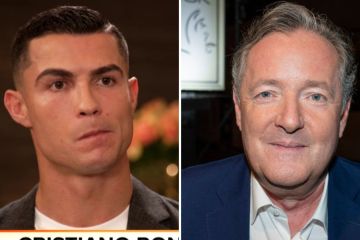 United are yet to make a decision on what to do with Ronaldo.

But, as exclusively revealed by SunSport, they are prepared to rip up his contract early.

His current deal is due to expire in the summer.

The 37-year-old is in talks with David Beckham’s Miami about a move to the MLS, as revealed by SunSport.

Ten Hag is in talks with United co-chairman Joel Glazer, chief executive, Richard Arnold and football director, John Murtough on how the club should respond.

The Times also say some people at the club are sad at how the situation is playing out with Ronaldo, who is still highly regarded by many.

But the majority of players at Carrington don’t expect him to rejoin the squad after the World Cup.

France defender Raphael Varane was the first United star to speak on Ronaldo’s interview, admitting it “affects” the players.

He said: “Obviously it affects us.

“We follow what is happening and what is being said. We try to calm the situation in our own way, we try not to get too involved in it.”

Married teacher mum, 35, jailed for abusing girl, 15, is banned from classroom for life after groping teen in her car