MANCHESTER UNITED fan Conor McGregor sensationally revealed earlier in the week that he was considering buying the club.

The UFC star took to social media to pose the idea to his 8.6 million Twitter followers with supporters furious with the Red Devils’ owners. 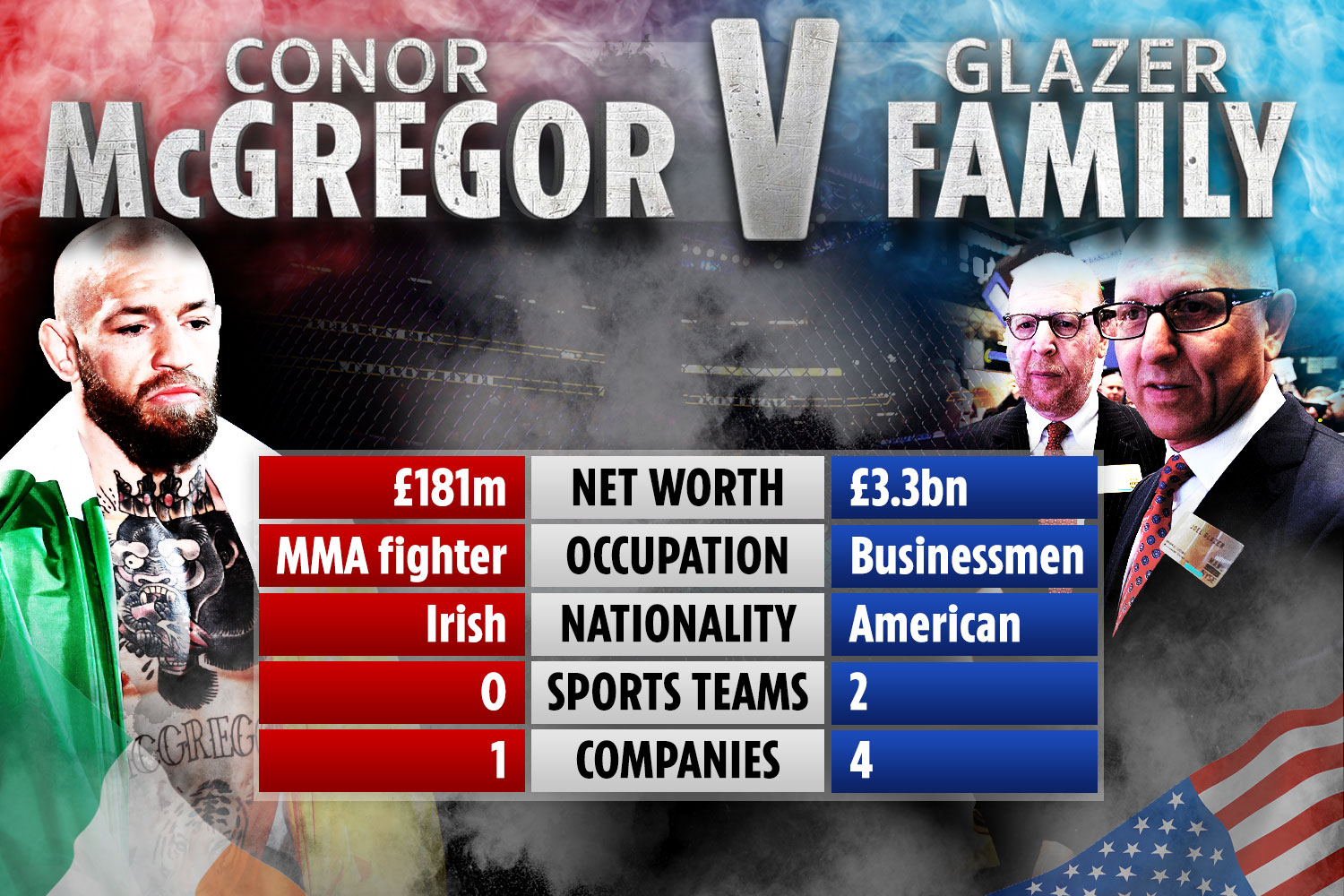 This is how Conor McGregor compares to Manchester United’s owners

Fans have never been keen on the Glazer family, and they have been left furious with the Americans following their plans to join the European Super League.

United eventually pulled out of the competition on Tuesday night along with rivals Manchester City, Arsenal, Chelsea, Liverpool and Tottenham.

In the aftermath of the withdrawal, share prices in United were down 6.60 per cent at 16.12 USD.

It led Irish fighter McGregor to tweet: “Hey guys, I’m thinking about buying Manchester United! What do you think?”

But can the Notorious afford to buy the Premier League giants? Sadly for fans of the 32-year-old, the answer is no.

According to the Mirror, if McGregor was to walk away from MMA, his net worth would stand at a whopping £181million.

That is due to money earned from fights, his successful Proper No.12 whiskey brand and endorsements with the likes of Beats by Dre, Monster Energy, EA, Burger King and Reebok.

But unfortunately for the two-weight champion, his net worth is nothing compared to what the Glazers are valued at.

Hey guys, I’m thinking about buying Manchester United!
What do you think?

Forbes states that the family boast a wealth of £3.3bn, as they not only own United, but also reigning Super Bowl champions Tamba Bay Buccaneers.

The Glazers – who are based in Florida – also control First Allied Corporation and the HRG Group.

Around 20 furious supporters broke into the club’s training complex on Thursday morning to advocate for fan ownership in the Premier League.

The men bypassed security and made their way to the first-team training pitch where they unveiled two banners which read ‘Glazers out’.

A second read ’51 % MUFC 20′ which refers to the German-style ownership of clubs which gives fans a stake in their club.

The protest comes just 24 hours after United’s executive vice-chairman Ed Woodward announced he was leaving his position at the end of the season.

And on Wednesday, United co-chairman Joel Glazer apologised to fans for United’s part as a founding member of the attempted breakaway league, which was universally hated by fans from all clubs.

49 Deal-Breaking Traits In A Significant Other, As Shared By People In This Online Group