Napoli forward Khvicha Kvaratskhelia has a growing band of admirers after a stellar first three months in Italy, with Real Madrid and Paris Saint-Germain among them.

Man City are tracking Khvicha Kvaratskhelia after watching him demolish Liverpool in the Champions LeagueCredit: Getty

Now City are taking a keen interest – and the Kvaratskhelia has an affection for them because of Kinkladze, who is a cult figure for his unforgettable spell there in the 1990s.

The Georgian international, who can play anywhere across the front three, was a key man in Napoli’s 4-1 Champions League thrashing of Liverpool.

Kvaratskhelia, 21, was star of the show with Rubin Kazan, but Russia’s invasion of Ukraine allowed foreign players to suspend their contracts.

He spent four months back in his homeland with Dinamo Batumi last season before moving to Serie A as a £10million snip. 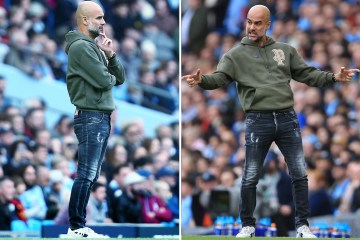 Despite signing him on a five-year contract, Napoli are desperate to give him an improved deal, so they can insert a £65m buy-out clause.

But Kvaratskhelia, who has hit seven goals already, has so far been reluctant to agree and wants to weigh up his options.

And City hope that if they do choose to firm up their interest, Kinkladze’s links with them will put them in pole position.

Kinky, as he was dubbed by fans, still keeps in touch with his old club and believes his fellow countryman has what it takes to thrive in England.

Meanwhile, crocked duo Kyle Walker and Kalvin Phillips will step up their recovery work this week and are on course to make the World Cup.

Walker, a certainty for the England squad, has had groin surgery while Phillips had a shoulder op last month.

Boss Pep Guardiola admitted on Friday that he is delighted with their progress – and the pair of them have had the green light to increase their core work and cardio fitness.

They will be back in the gym this week, and although the club will not risk longer term injuries by rushing them back, hopes of both making Qatar are growing.

Want Information About Baseball? Look For Good Ideas On this page!