WHEN Harry Kane scored in all three of England’s World Cup qualifiers during the international break, Gareth Southgate and many pundits painted a rosy picture of the future.

They claimed that, with a summer of unsettling transfer speculation over, the Tottenham striker could continue on his merry way, chasing goalscoring records for club and country at a rattling rate.

Harry Kane was brought back down to earth with a bump at Crystal PalaceCredit: Rex

Well at Selhurst Park on Saturday, it didn’t feel that way.

For the first time in his career, Kane failed to have a shot or a touch in the opposition box as Spurs were stuffed 3-0 by Crystal Palace.

Sure, Tottenham had been top of the Premier League after three straight 1-0 victories, they were missing several key players including Son Heung-min and were reduced to ten men before Palace opened the scoring.

Yet under the uninspiring, safety-first management of Nuno Espirito Santo — and with a Spurs squad which surely has no chance of threatening the top four — can we really expect Kane to maintain his mojo?

Kane isn’t one of nature’s sulkers or brooders, despite his late arrival back to pre-season training as he attempted to force a move to Manchester City.

But his brother and agent Charlie’s abject failure to outwit chairman Daniel Levy, as well as City’s ultimately half-hearted effort to prise him away, must have been a crushing blow.

It was felt by many of us that Pep Guardiola might live to regret his club’s inability to land Kane this summer — especially after a 1-0 opening-day defeat against a Kane-less Spurs.

Chelsea, meanwhile, have re-signed one of the world’s greatest centre-forwards, Romelu Lukaku — who is  already a member of the Premier League’s 100 club.

Yet City allowed their own veteran goal machine Sergio Aguero to leave without replacing him.

City do not possess an out-and-out goalscorer, yet they won the title by 12 points last season, without any of the top eight in the scoring charts. And since that defeat in N17, City have boasted nine different scorers in three straight victories, including a significant 1-0 win at Leicester on Saturday.

Guardiola, who patented the idea of the ‘false nine’ at Barcelona, revels in doing things differently.

While conventional wisdom suggested City ought to have prioritised the signing of Kane, Guardiola instead added Jack Grealish to his fleet of playmakers and widemen for a British-record £100million.

It was absolute peak Pep and Lord love him for it.

Save for a slightly snarky comment, wishing Kane all the best for the rest of his career, Guardiola has breezed on — his billionaire club continuing to share around the goals like a workers’ co-operative. 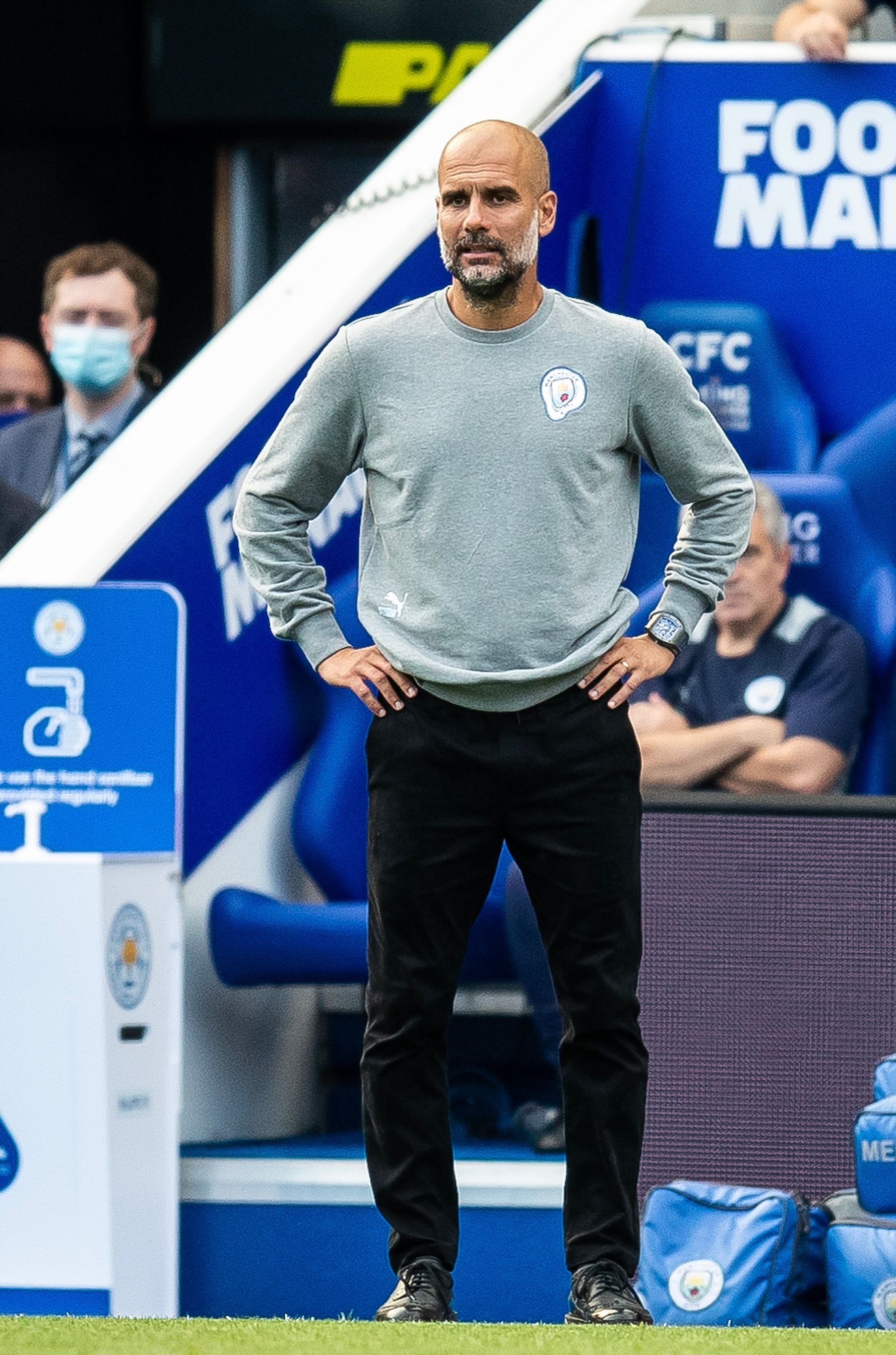 For a few brief hours last month, it appeared United might actually allow Ronaldo to head to the Etihad, when his departure from Juventus was announced.

But Guardiola, by all accounts, wasn’t too fussed about his cross-town rivals signing one of the two greatest players of the modern era, just as he didn’t kick off about Paris Saint- Germain snaffling the other one, Lionel Messi, either.

There has, I’m told, been much talk about all this among City’s squad.

These men are well-versed in Guardiola’s left-field vision of the game and tend to trust him implicitly.

Yet one player privately claimed that Guardiola — a football obsessive with a hyperactive mind — might actually enjoy the extra challenge of winning a title without an out-and-out goalscorer.

He reckoned that signing Kane, or Ronaldo, might have made it all too easy for him.

It’s an idea that makes you smile — not that we’re ever likely to discover whether it is true.

Kane is going to regret the anti-climactic ending of his summer transfer saga far more keenly than Guardiola.

Barcelona are in financial meltdown, Real Madrid have said goodbye to their world-class central-defensive pairing of Sergio Ramos and Raphael Varane, while Inter Milan have lost  manager Antonio Conte and star player Romelu Lukaku since winning the Scudetto.

All Messied-up Paris Saint-Germain may be the bookies’ favourites, while Bayern Munich remain mighty — and those two appear the only serious threat to our sides.

But holders Chelsea, runners-up Manchester City and 2019 champs Liverpool have the know-how, while Euro underachievers Manchester United have been boosted by Cristiano Ronaldo and Varane.

No wonder the prime movers in the European Super League were from the faded Spanish and Italian leagues. 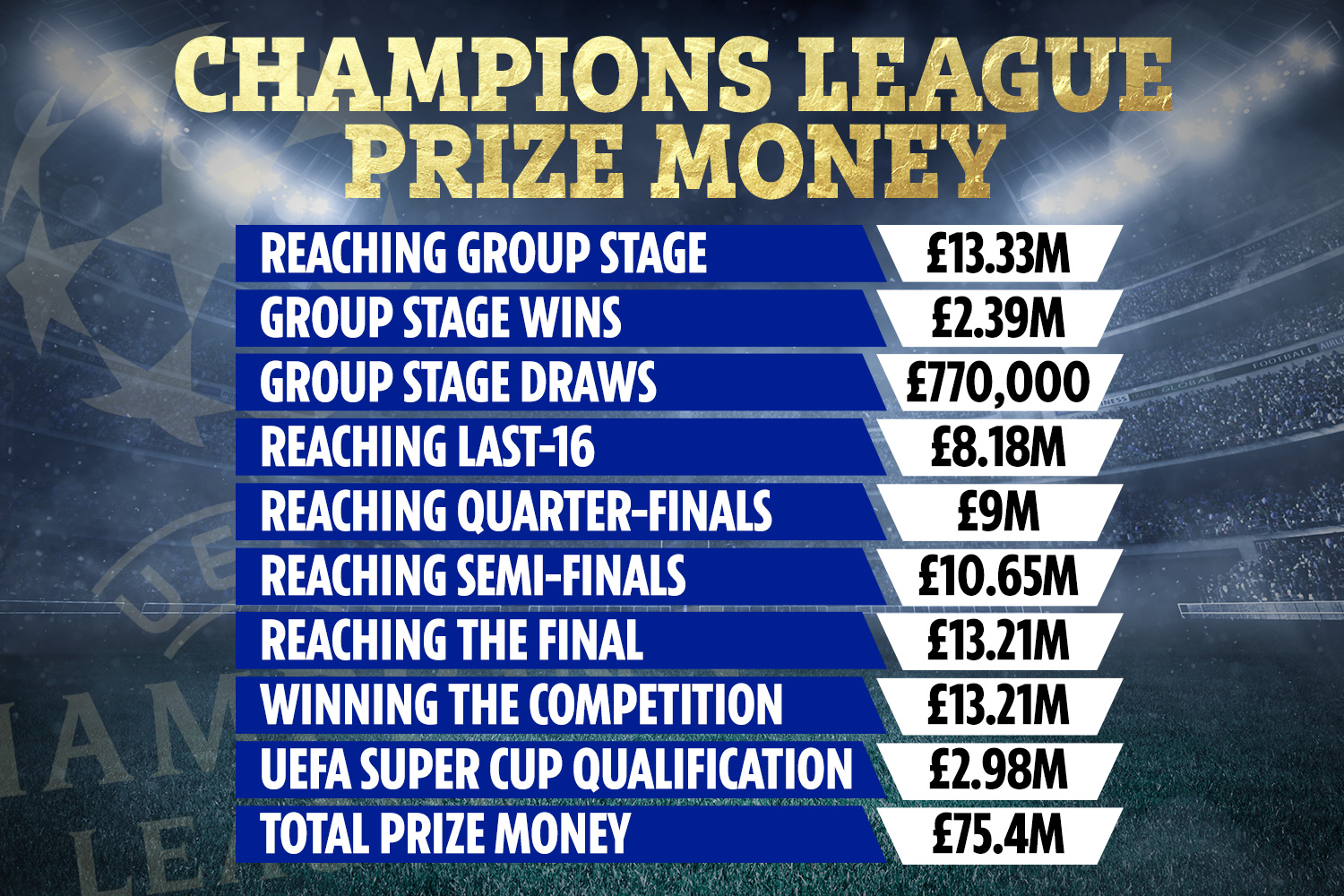 The Champions League prize money on offerCredit: The Sun

﻿IT was depressing to pass an empty Old Trafford cricket ground on Saturday, which ought to have been packed for the Fifth Test against India, while walking back from the ‘other’ Old Trafford to the tram station.

That there was no room to fit in the final match of a thrilling series — after India’s Covid concerns caused its cancellation and with the IPL resuming this weekend — says much about the perilous future of the great Test match game.

COOKING UP A STORM

﻿IPSWICH TOWN, former champions of England, are winless and in the League One relegation zone after a 5-2 home battering by Bolton.

Time for boss Paul Cook, well-backed in the transfer market, to prove he is as good as he believes.

﻿CHELSEA were fined £25,000 for ‘failing to control their players’ against Liverpool last month.

It’s wonderful, this terminology — it seems to assume Thomas Tuchel ought to have fitted his players with muzzles and ensured they didn’t foul the Anfield surface.

﻿JOSE MOURINHO toasted the 1,000th game of his managerial career by sprinting down the touchline in celebration and claiming he felt like a teenager, maintaining his perfect start as Roma boss by beating Sassuolo.

Rascal Jose loves these landmark occasions — including Arsene Wenger’s 1,000th match as Arsenal boss, when his Chelsea dished out a 6-0 hiding to the man he branded a ‘specialist in  failure’.

﻿US Open tennis champ Emma Raducanu delivering a video of thanks to Chinese fans in fluent Mandarin, only added to the certainty that she will be a huge global superstar.

There is not an ounce of  cynicism about the Brit, 18, who has a Chinese mum. But with China’s population  at 1.4billion, she also has  serious commercial clout.