The 21-year-old central midfielder has impressed in the league, Copa Sudamericana and the Copa Libertadores already in his career, and now is being touted by Europe’s top clubs, it’s claimed.

The Argentine has already earned his first call up to the international sideCredit: AFP

According to Goal, the Premier League holders are looking to acquire the Argentine in a move mirroring the deal completed for Alvarez in January.

The prolific striker, who notched up 18 goals and seven assists in 21 games for River Plate in their title winning 2020/21 season, is currently back on loan at his old club until the summer, where him and Fernandez are rekindling their strong partnership.

While the idea of the pair featuring together at The Etihad is appealing, it’s being reported that Pep Guardiola’s side look set to face stiff competition for the midfielder’s signature.

Real Madrid are among a number of European powerhouses interested in Fernandez, who has acknowledged the interest in him across the world. 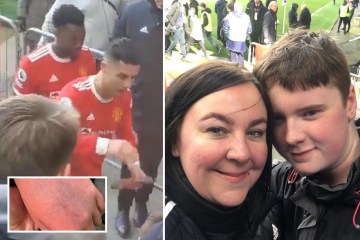 Fernandez said: “I am pleased because it means I am doing things right,” but clarified that his “head is in River”.

He told Como te va: “When we brought him to Defensa, we told him he was a player for Real Madrid.”

With Fernandez focusing on his current club, his output has begun to improve drastically, with him scoring three and setting up the same amount in nine league appearances this season.

City may be keen on making the move with an eye to replacing a great, with Fernandinho’s contract set to expire at the end of the season.

The Brazilian has made 373 appearances for the English side, but it is believed his time in Manchester may be up this summer.

Fernandez has been utilised in defensive midfield as well as in box-to-box roles in Argentina, and could be an excellent replacement for a club legend.

From Covid toe to burping