MOHAMED SALAH scored a penalty at the same end as his spot-kick against Tottenham in the 2019 Champions League final – and there, the similarities end.

The Wanda Metropolitana here in the outskirts of Madrid will always have a special place in the heart of Liverpool fans for obvious reasons. 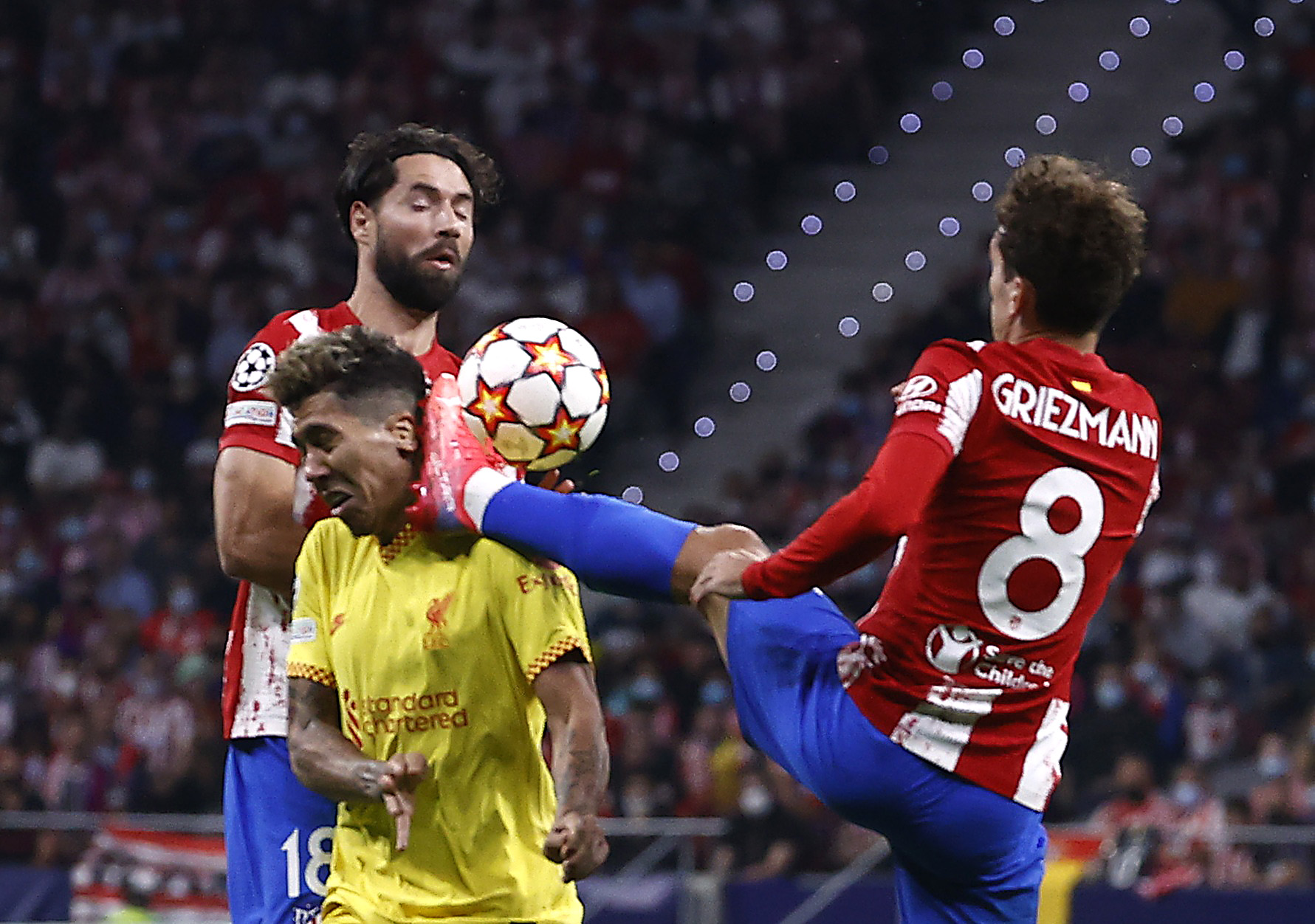 Griezmann was sent off after scoring two goals as his high boot was deemed dangerous playCredit: Reuters 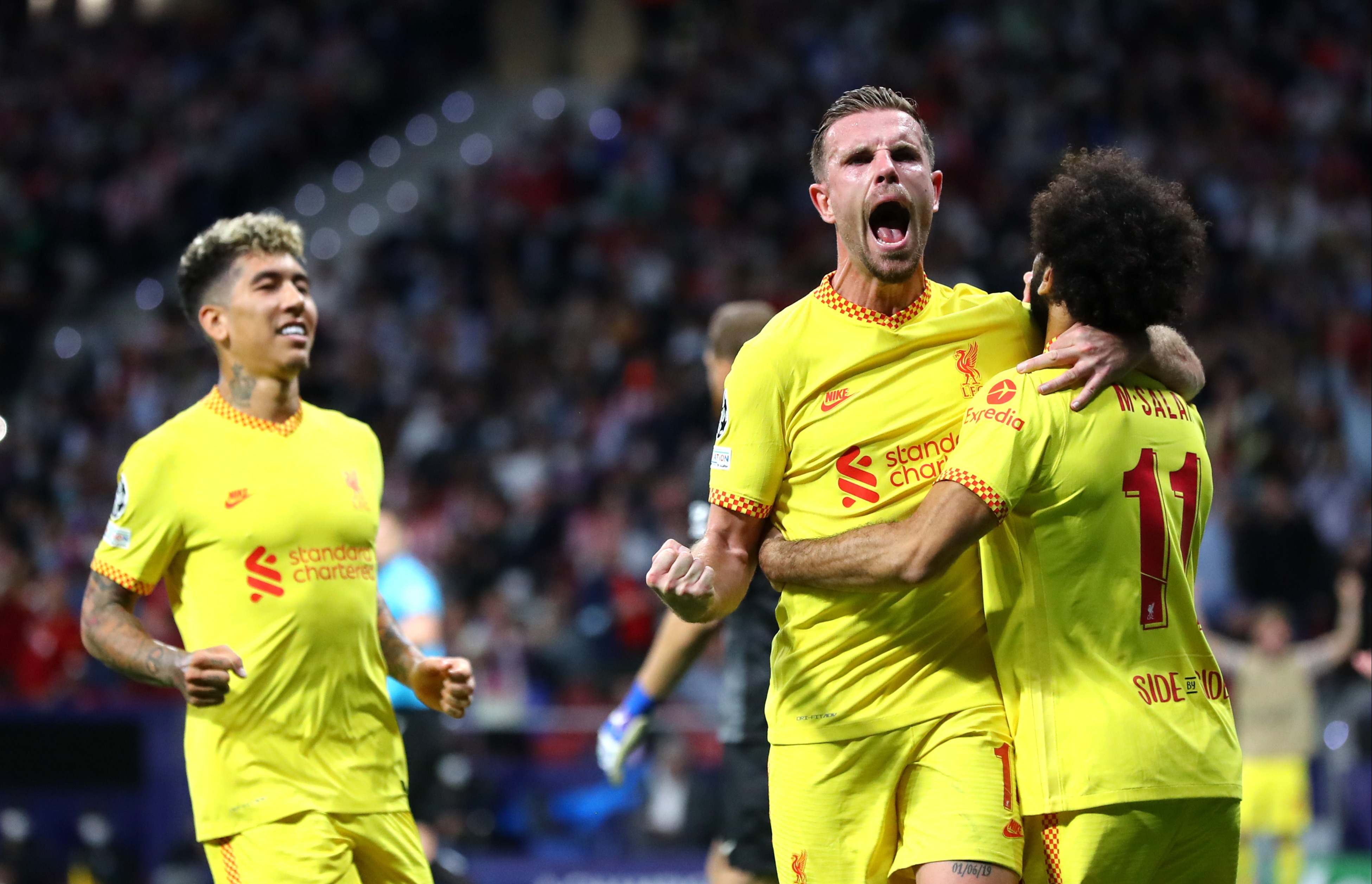 But as disappointing as that game was for the neutral, this completely bonkers game of football was the polar opposition.

And not forgetting it was also here in February 2020 that Liverpool delivered a stinking performance in a 1-0 loss before surrendering their crowd with a 3-2 loss in the second leg.

But here, this was Liverpool on an absolutely different planet.

Salah scored another worldie of course, to become the first player in Liverpool’s history to score in nine successive games.

Naby Keita made it 2-0, was then exposed for both of Antoine Griezmann’s goals which brought Atletico level – and then the French international was sent off as the game lurched in another fascinating direction.

The year Liverpool won the Champions League, they lost all three away group games but followed up a5-1 battering of Porto with this to make it three wins from three.

And we thought this was a difficult group.

Diego Simeone, who celebrated both his goals wildly and thought he had been awarded a late penalty before it was overturned by VAR, looked crestfallen.

Naturally, a large part of this game will be remembered by another ridiculous moment of football by Salah.

His goals against Manchester City and Watford were brilliant. Straight out of the Diego Maradona handbook And so was his opening goal

Salah took just eight minutes to prove why he is currently on a different level to every other player on this planet bar none.

There was little danger when he chased Andy Robertson’s overhit cross, but got past Yannick Carrasco with embarrassing ease, drifted past Thomas Lemar and then shimmied his way beyond Atletico skipper Koke.

The shot took a deflection off Geoffrey Kondogbia but the ball was going in. While the goal was incorrectly awarded to James Milner, Salah was given his due reward for a piece of pure brilliance.

Yet in terms of a clean, first-time strike, you will not get many better than Keita’s.

Defender Felipe delivered a poor clearance from Alexander-Arnold cross and it was promptly struck into the net by Keita who even looked surprised to have scored such a fine goal. 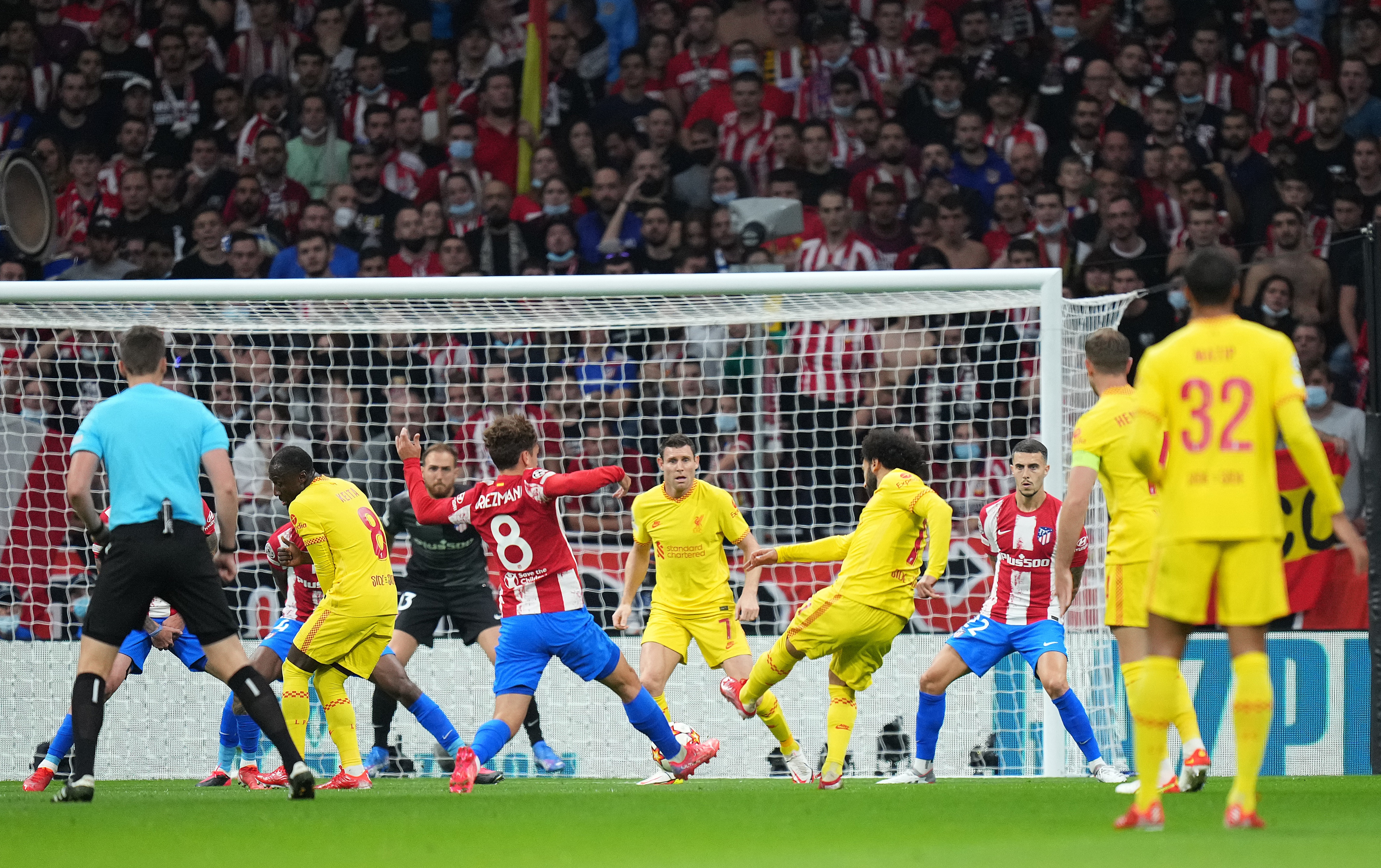 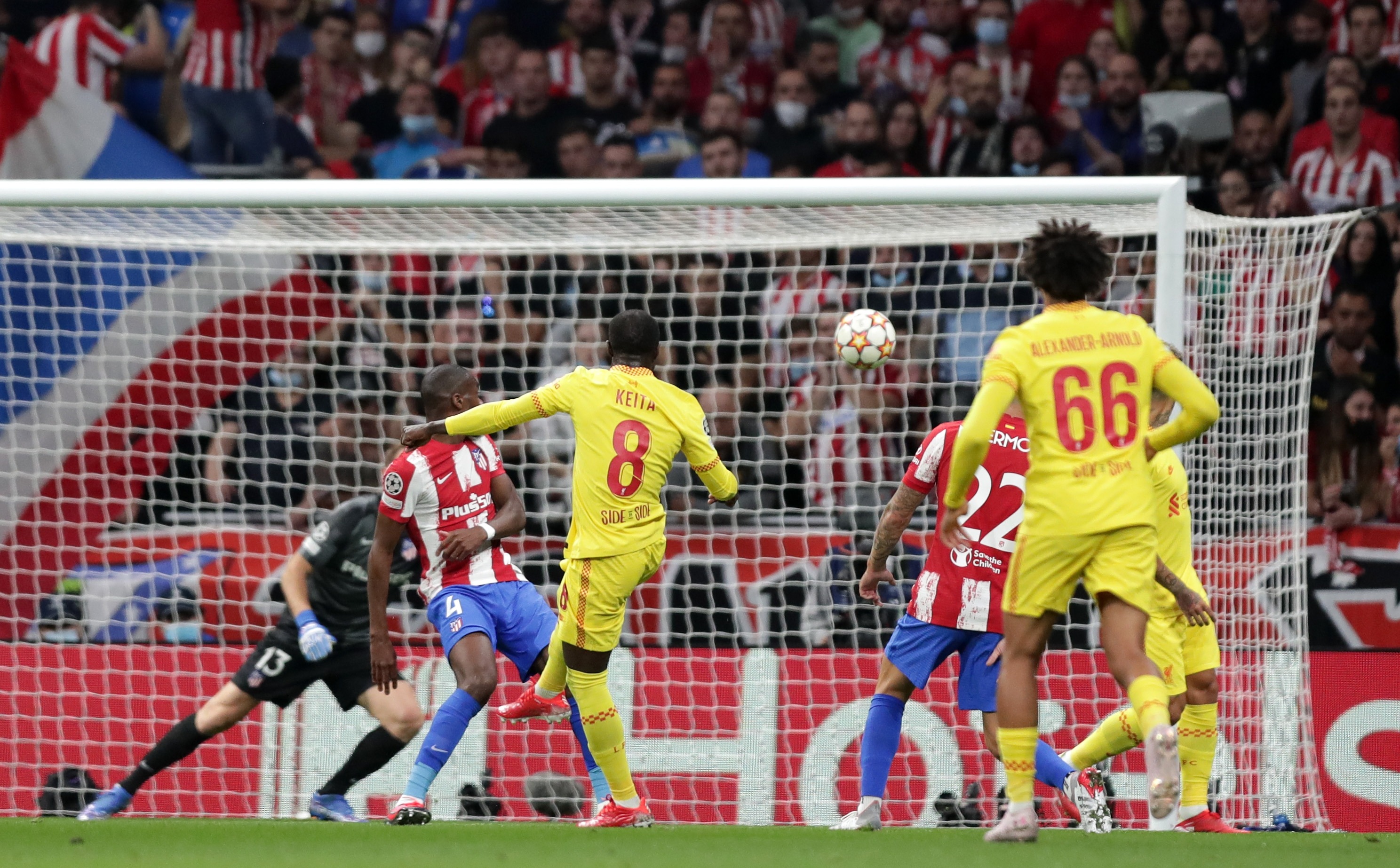 It was only his ninth for Liverpool, after all, although Keita’s night went downhill after that.

Yet Klopp will be annoyed at the way his team handed Atletico a way back.

Lemar collected a short corner from Rodrigo De Paul, he got past Keita too easily and pulled the ball back to an unmarked Koke on the edge of the box and his drive was helped into the net by Griezmann.

There was a short wait for VAR due to the number of home bodies around Alisson with Lemar looking to have been interfering with play but the goal.

Liverpool had every right to be annoyed but it was still sloppy.

Griezmann should have equalised after Liverpool were caught out hopelessly on a counter-attack after losing possession. The Frenchman had plenty of time but rushed his shot and hammered the ball at Alisson’s face.

Yet the French striker delivered a far more polished effort to level and it was Joao Felix who copied Salah by delivering a slice of brilliance.

And to think these group games are so often rubbish.

Felix, who has been a mixed bag since his £113m move from Benfica, produced a dazzling moment of skill, dribbling past Keita before supplying the pass to Griezmann who took a touch to move the ball away from a sluggish Van Dijk before burying a shot into the bottom corner.

Comically, Aliisson nearly handed Atleti a third when he rushed off his line and hammered a clearance against Van Dijk but fortunately, the ball fell back at his feet. 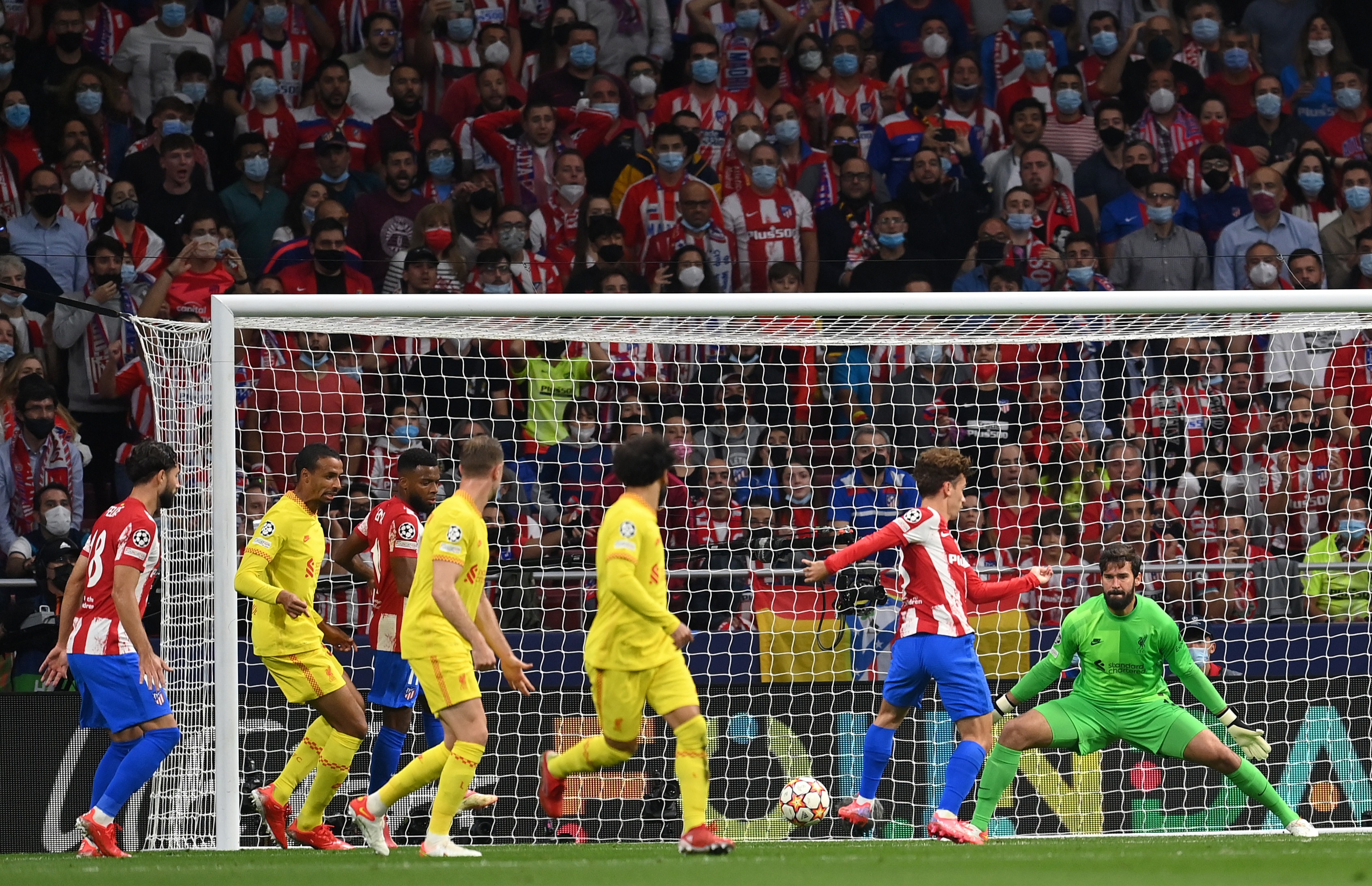 Griezmann pulled one back for Atletico midway through the first halfCredit: Getty 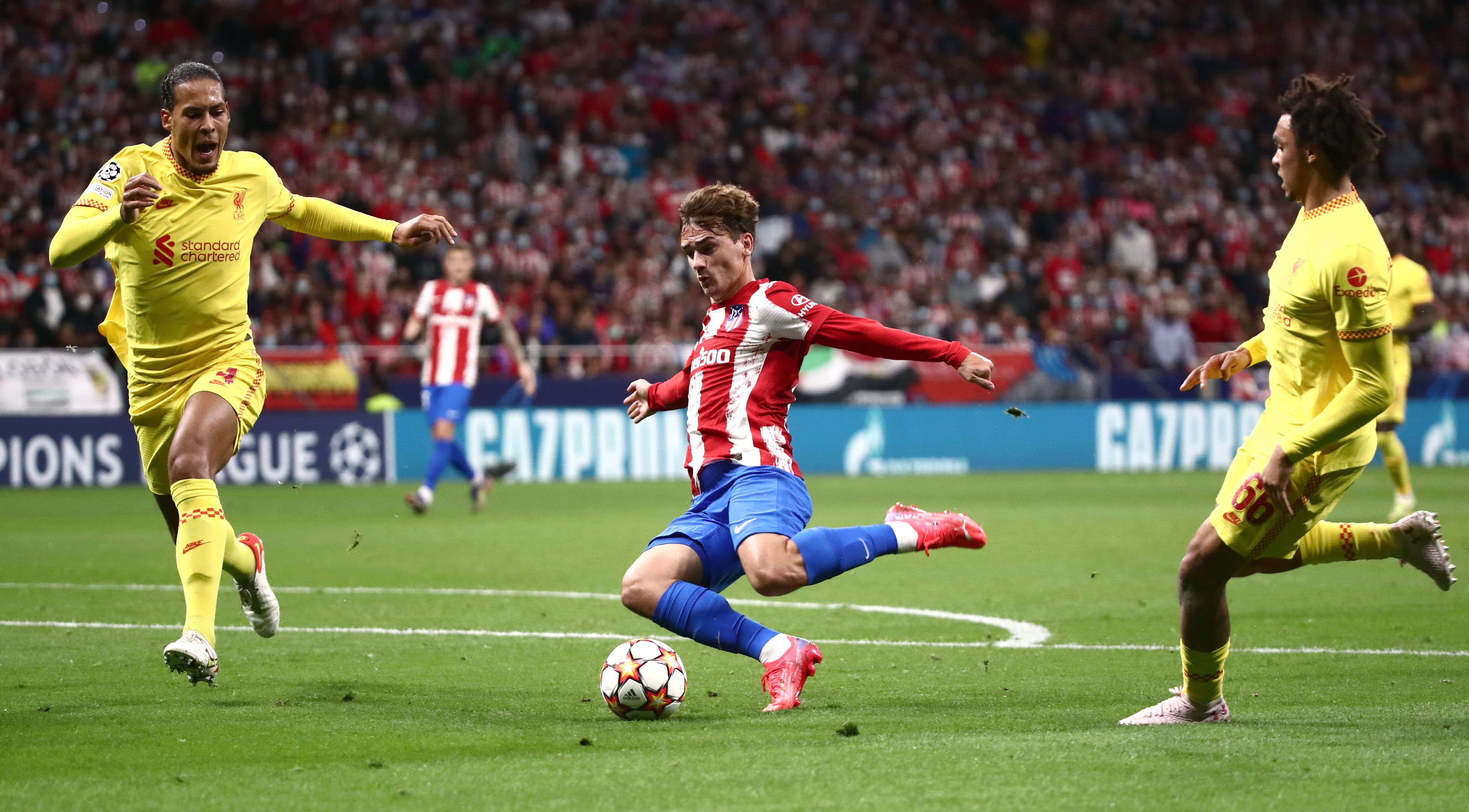 He then completed the turnaround 11 minutes before the break with a neat finishCredit: Reuters

It was no surprise at the break that the struggling Keita was replaced at half-time by Fabinho to add some steel to what was looking weak and over-run midfield.

And Liverpool still looked to be doing their best to lose this game – Carrasco was denied by another save from Alisson – before Griezmann was handed his red card for a high challenge on Roberto Firmino.

Already angry, the home crowd became even more incensed when Milner was handed only a yellow card – albeit correctly – for a challenge on Kieran Trippier.

Realising that Milner was now being targeted for another caution, Klopp mixed it up by replacing his veteran midfielder and Sadio Mane with Diogo Jota and Alex Oxlade-Chamberlain.

Jota who was clearly bundled to the ground by Mario Hermaso who knew exactly what he was doing, despite his look of total innocence.

After looking at the VAR replays, ref Siebert overturned the decision.

Simeone was furious and he ended the evening by bolting down the tunnel without a handshake.

Klopp did not look amused with Simeone but he will reflect on another terrific European night.

After Alisson’s 95th minute header against West Brom which helped them towards fourth spot, let’s not forget that, Liverpool now seem to be getting better in this competition.

What does the King of Sword tarot card mean?