“If you want to avoid relegation,” suggested Anthony Modeste, “then you have to beat these opponents.” The Köln striker might have missed Bochum’s impressive, dogged opening performances back in the Bundesliga but his perspective is one you understand from someone who knows this fascinating, drama-heavy club so well. Safety first, second and third after the experience of recent seasons.

The circumspection of FC Köln’s players is never going to be matched by the fans in the home of Karneval, though. Cologne, as a city, never needs much encouragement to be swept up in a wave of optimism but there are reasons for observers beyond the faithful to believe in Effzeh this season. Failing to beat Bochum, as Modeste suggested, might have taken a bit of air out of the Köln balloon. Yet a 2-1 win over the plucky promoted team was only the tip of the iceberg in what should have delighted the new coach, Steffen Baumgart, and all those of an Effzeh persuasion.

Any win is one to be savoured after last season, where safety was salvaged through the relegation play-off after just eight wins in 34 regular season games. They had finished the previous season with a 10-game winless run. It was survival by minor increments, and it was not sustainable. Yet this term, the change in approach is remarkable. It is not speaking too soon to suggest that Baumgart has transformed the horizons and aspirations of his players. The former Paderborn coach, already instantly recognisable in his grey flat cap straight from the club shop, has “taken off the lead vest of fear” from the team in just a few short weeks, as Alexander Haubrichs of the city’s Express newspaper put it.

This Köln side close and snap, press and harry, and move the ball with a belief in the power of possibility. The 25,000 fans in the Rhein Energie Stadion bellowed with joy as they revelled not just in being back home , but in the presence of a team in front of them who are ready to puff out their chests like they do. Modeste, who had become a shadow of the forward who scored 25 times in the club’s run to Europe, seems to have rediscovered his former self, giving Köln the top striker they desperately needed but could never afford. Others who were treading water, like defender Jorge Meré and the midfielder Florian Kainz, are now full of energy.

Baumgart’s intensive work on the training pitch is paying off, with two home wins and a narrow, entertaining and brave defeat at Bayern Munich in between. Köln have run more than any other team in the Bundesliga so far (239km). Their mission is to exhilarate. It is, as Kicker’s Mirko Frank, wrote, “spectacular football instead of boring shoving back and forth”. As Baumgart charmingly described it, “it’s about offering the people who come to the stadium the best possible service”.

They certainly got that on Saturday when it was clear how deep an effect the new man has had. When Köln dominated early on and didn’t break through, when Modeste hit the post and Bochum defended bravely, no heads dropped. They just picked it up and started again. The game was still goalless in the final 10 minutes, but Köln now have players ready to seize moments. Louis Schaub came on as a substitute in the 78th minute. Within four minutes, he sidefooted in a delicious Kainz delivery to start the scoring and bring the house down.

There will be ups and downs to come, but Köln have made their fans feel alive again. It means so much.

Bayern may not be top just yet but swept to an easy-as-it-sounds 5-0 win over a lamentable Hertha (bottom with zero points). As such, it was hard to judge just how good they were, even if it was all very aesthetically pleasing – just as it’s sometimes difficult to quantify the brilliance of Robert Lewandowski, so let’s have the numbers do it for us. He scored for the 13th Bundesliga game in a row, chasing another of the late Gerd Müller’s records (of scoring in 16 successive league matches), reached his 300th Bayern goal in all competitions, and completed his 15th Bundesliga hat-trick with a late header. Lewandowski is expected to have even more back-up after the international break, with Bayern nearing a deal for Leipzig’s brilliant midfielder Marcel Sabitzer, for a fee around the €15m mark. 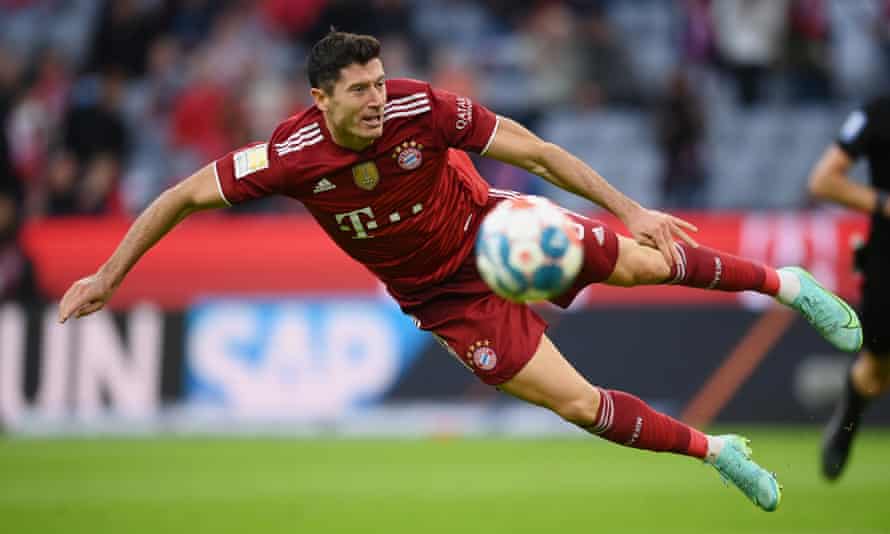 It was all a little more fraught in Dortmund on Friday night, where the home side conceded a 90th minute equaliser to MounesMunas Dabbur before the inevitable Erling Haaland conjured three points from an uneven performance with a gleefully driven stoppage-time winner. Fans will hope that is his only last-minute surprise of the week, with speculation that Paris Saint-Germain will attempt to prise him away from Westfalen with a huge late offer should Kylian Mbappé be sold. PSG are probably the only club who could put in the sort of offer BVB couldn’t refuse for the Norwegian phenomenon this summer, but the club are publicly steadfast. “Nothing has changed in our position and nothing will change,” said the sporting director, Michael Zorc. “Our position is clear. I don’t have to play the parrot all the time.”

Wolfsburg went top with a 1-0 win over RB Leipzig in the late game on Sunday, maintaining a 100% record via Jérôme Roussillon’s winner. It was a scruffy game but offered some vindication for Mark van Bommel, the coach treated with scepticism after a poor pre-season and the DfB Pokal farrago, when the coach made two many substitutions and Wolfsburg were disqualified. On Sunday, Van Bommel and his players were more concerned with the health of a fan who collapsed in the stands and had to be resuscitated. The supporter is now recovering in hospital.

The leaders overnight on Saturday were Gerardo Seoane’s Leverkusen, though his team were given a helping hand by two Augsburg own goals in the opening 14 minutes, the first a spectacular chip over his own goalkeeper by Iago. Excellent second-half efforts from Patrik Schick and Florian Wirtz wrapped up a 4-1 triumph late on – with the latter’s impact justifying Seoane’s decision to rest him, allowing him to recover his optimum form. “We’re a unit,” said the midfielder Kerem Demirbay. “Something is coming together here.”

Union made it into the Europa Conference League groups and topped off their week in front of a buoyant Köpenick crowd by beating Borussia Mönchengladbach 2-1. Niko Gießelmann’s firm header opened the scoring before a work of art by Taiwo Owoniyi eventually proved decisive, a slick combination with Max Kruse cutely finished by the former Liverpool man. “He always knows what he wants to do with the ball,” said Awoniyi in praise of his strike partner. “That’s what defines him.” As does a sharp tongue – Kruse also complained about Union playing “too many long balls” though he added: “We’re successful, and that’s all that counts.”