ON-LOAN Paris Saint-Germain goalkeeper Garissone Innocent collapsed and was rushed to hospital during a Ligue 2 match – after the opposition goalkeeper was also knocked unconscious and required a brain scan.

Innocent, 20, was playing for Caen in their clash against Chambly on Saturday night. 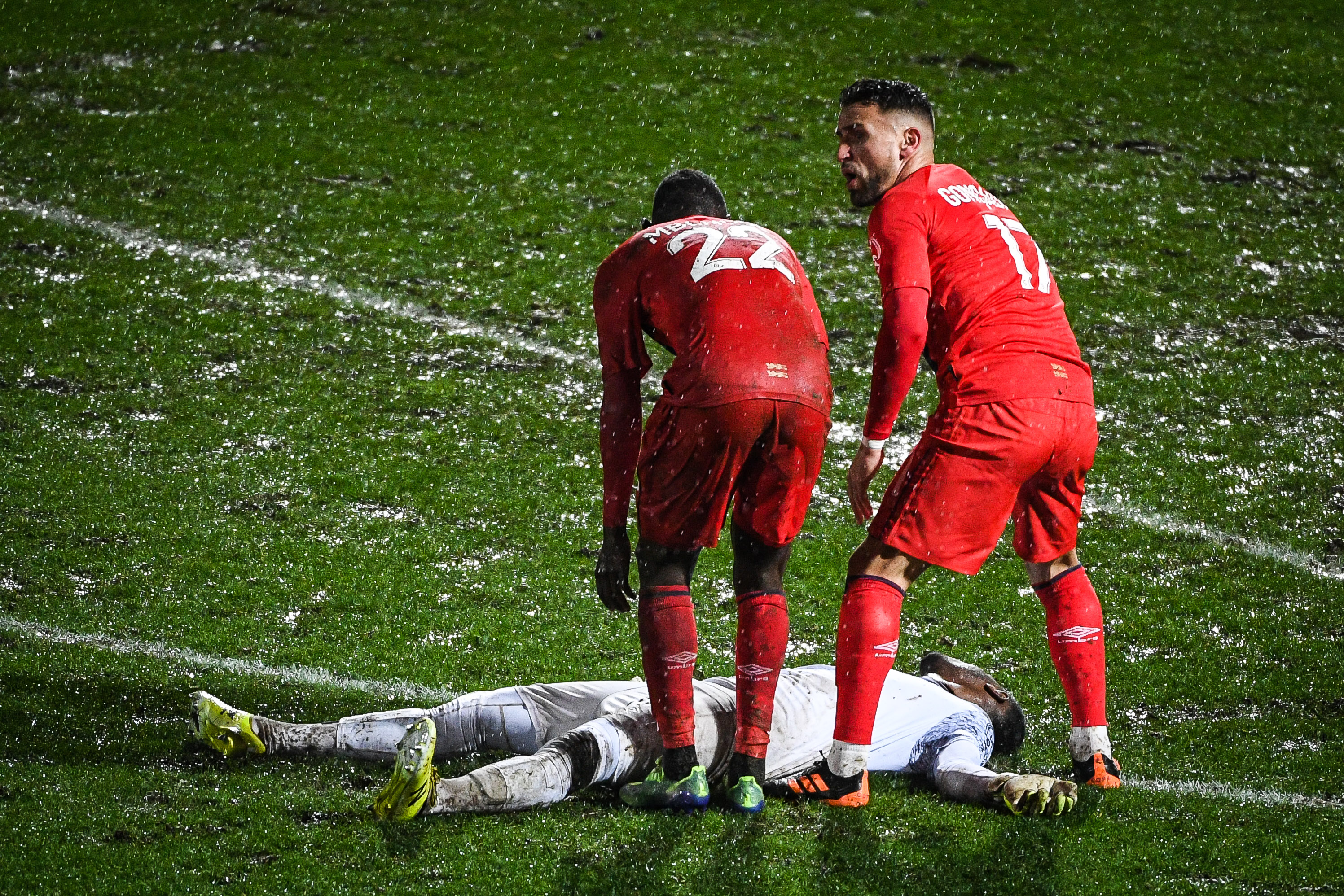 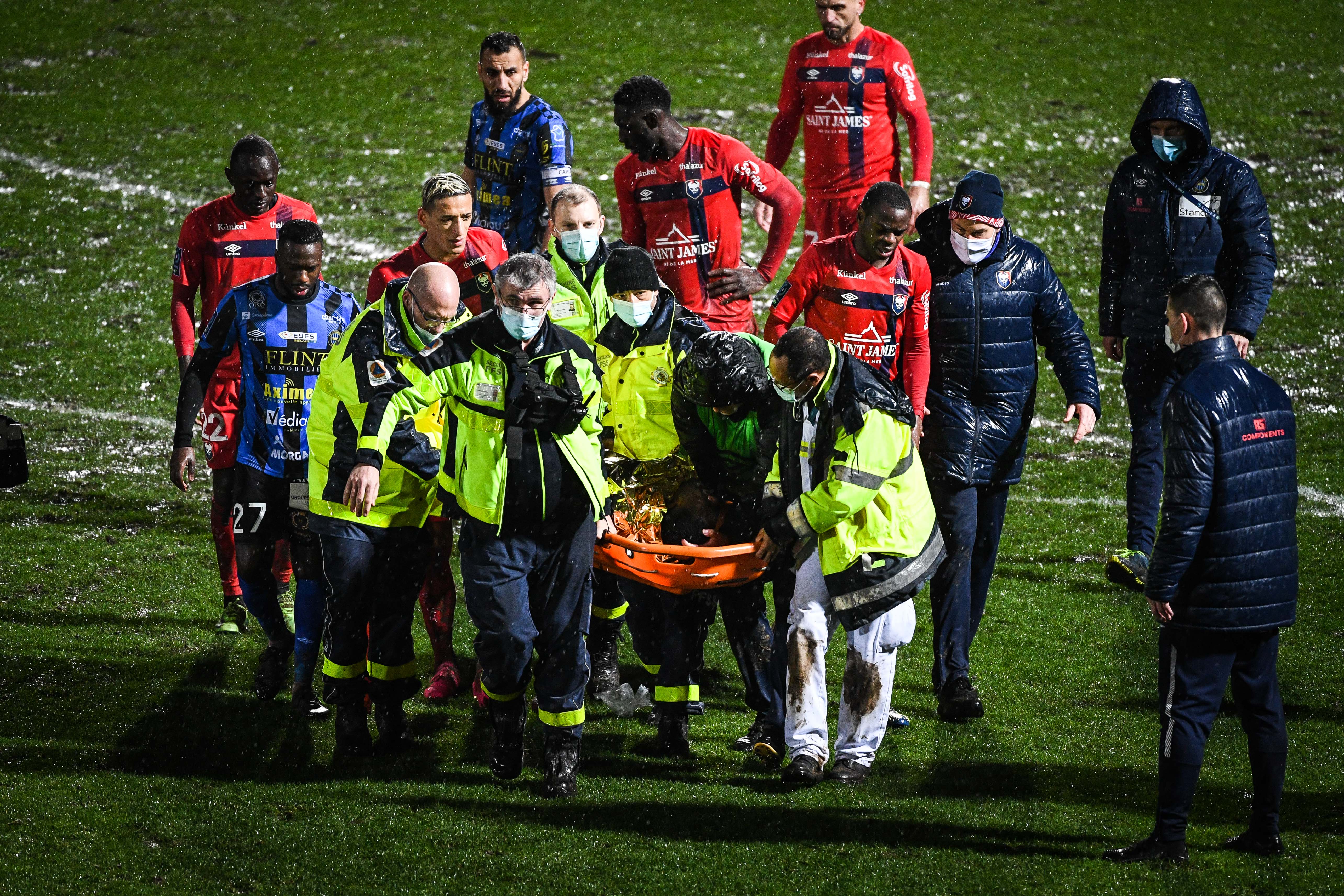 The 20-year-old Frenchman was rushed to hospital where he regained consciousness and stayed overnightCredit: Icon Sport – Getty

With nobody near him in the 86th minute, the Frenchman suddenly fell unconscious in his penalty area in worrying and distressing scenes.

He was treated on the field by medics before being stretchered off and taken to the hospital, where he woke up and remained overnight in a ‘stable condition’.

French news outlet Ouest-France reported Innocent had a tachycardia attack, an abnormal electrical impulse in his heart, causing him to lose consciousness.

Coach Pascal Dupraz said: “He had trouble speaking and breathing. I hope everything’s going to be okay.

“These are scenes you don’t expect to see on the pitch. All my thoughts are with him.”

The club tweeted on Sunday morning to say there was ‘reassuring news’ while PSG sent their best wishes to their academy graduate.

Caen right-back Hugo Vandermersch went in goal for the remaining minutes with the away side already making all five substitutions as they ended the 4-2 defeat with nine players.

In a bizarre twist of fate, Chambly goalkeeper Xavier Pinoteau had been hurried to hospital in the first half. 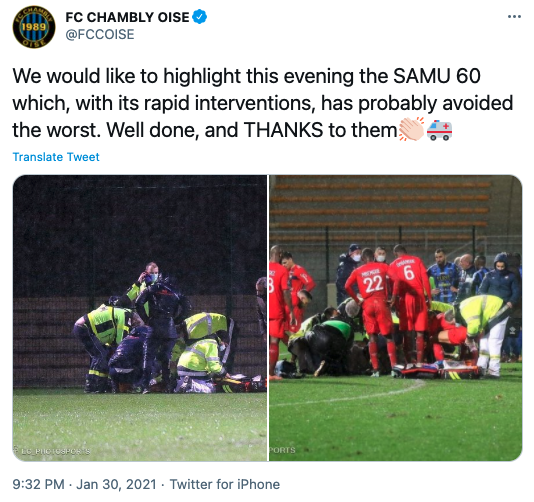 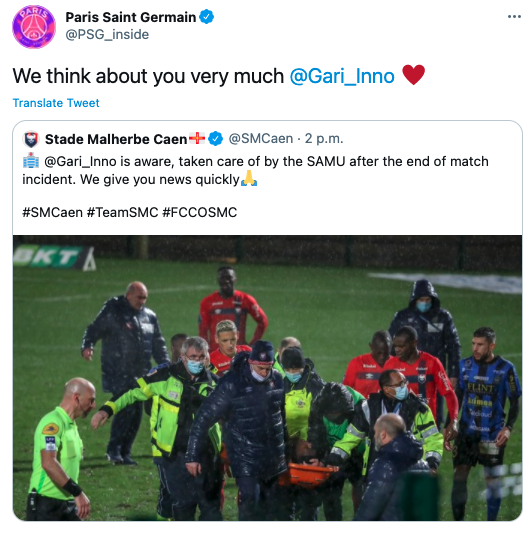 He was knocked out after a 32nd-minute tackle by Caen’s American winger Nicholas Gioacchini, who received a red card.

Pinoteau regained consciousness and was put on a drip for the journey before having a brain scan.

Chambly wrote on Twitter: “Following his shock to the head during the match against @SMCaen, our goalkeeper Xavier Pinoteau is doing well.

“And that is the essential point. He remains in the hospital for a follow-up scan tomorrow or Tuesday.

“We would like to highlight this evening the SAMU 60 [French emergency services] which, with its rapid interventions, has probably avoided the worst. Well done, and THANKS to them.”

Pinoteau said: “I thank everyone for the many messages of support and sympathy that I have received since yesterday.

“A big thank you to the SAMU, the doc and the rescuers for their efficiency and their kindness! PS: I haven’t said my last word!” 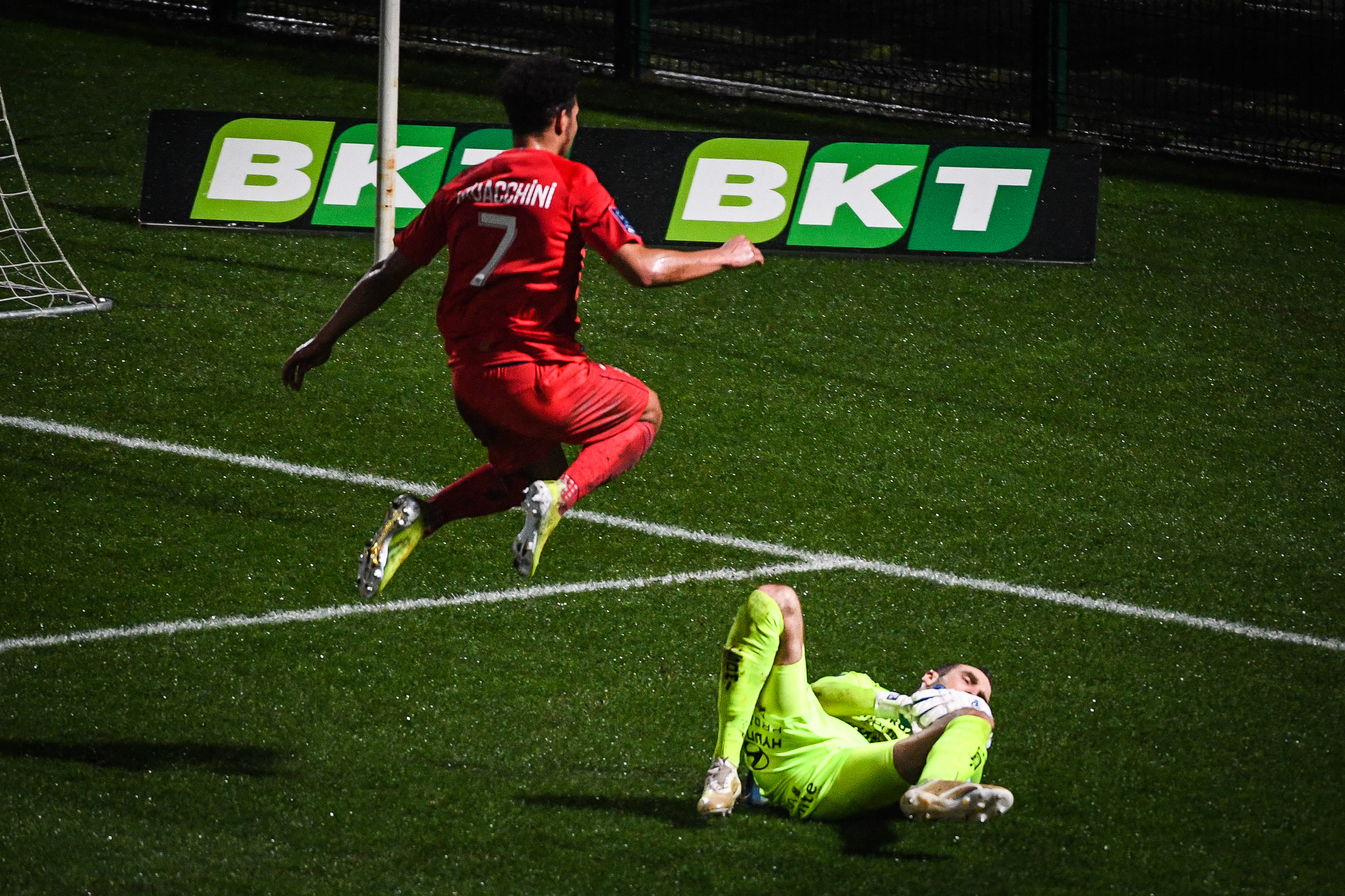 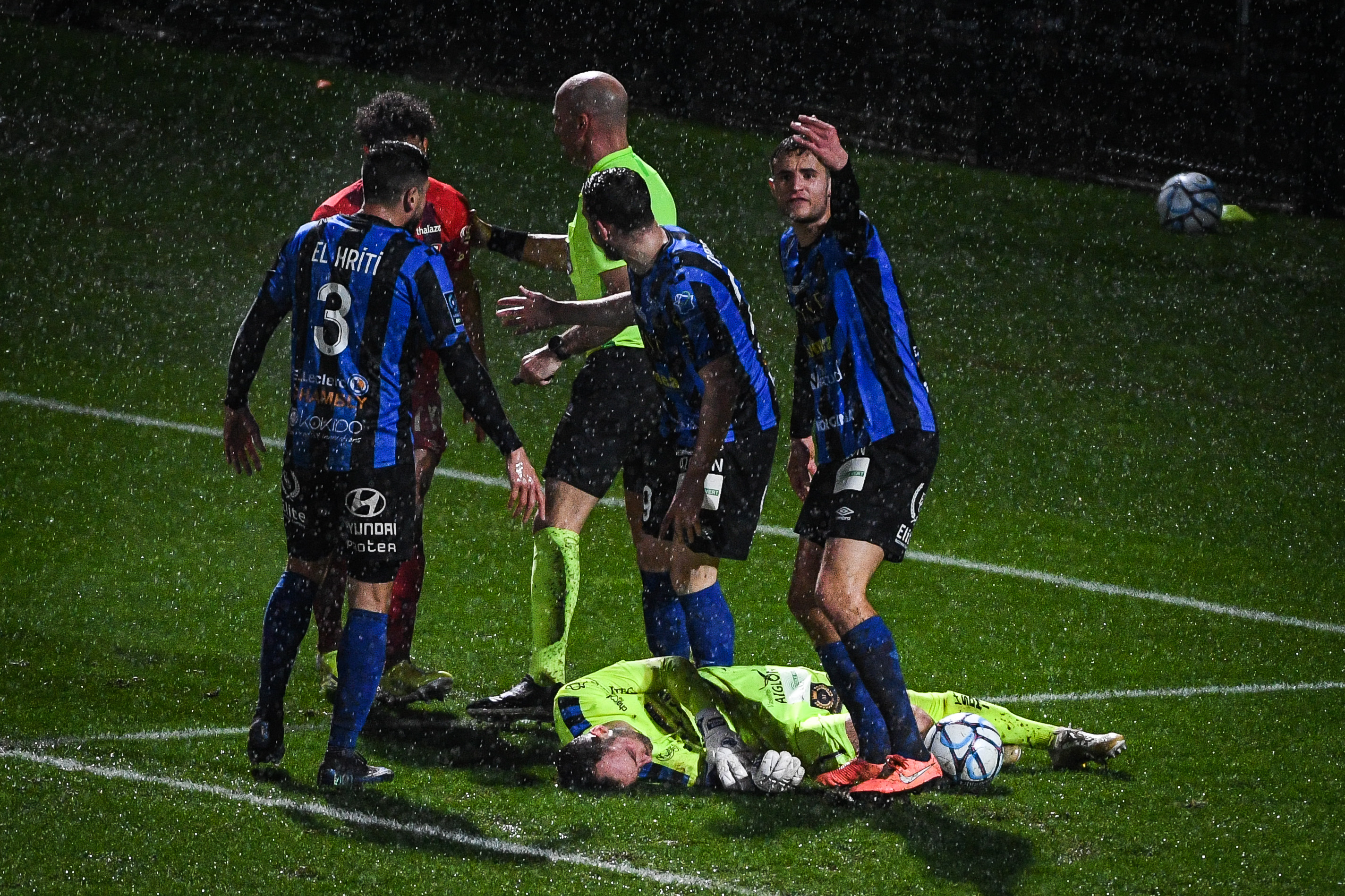 Pinoteau needed rapid treatment after being knocked out in the first halfCredit: Icon Sport – Getty 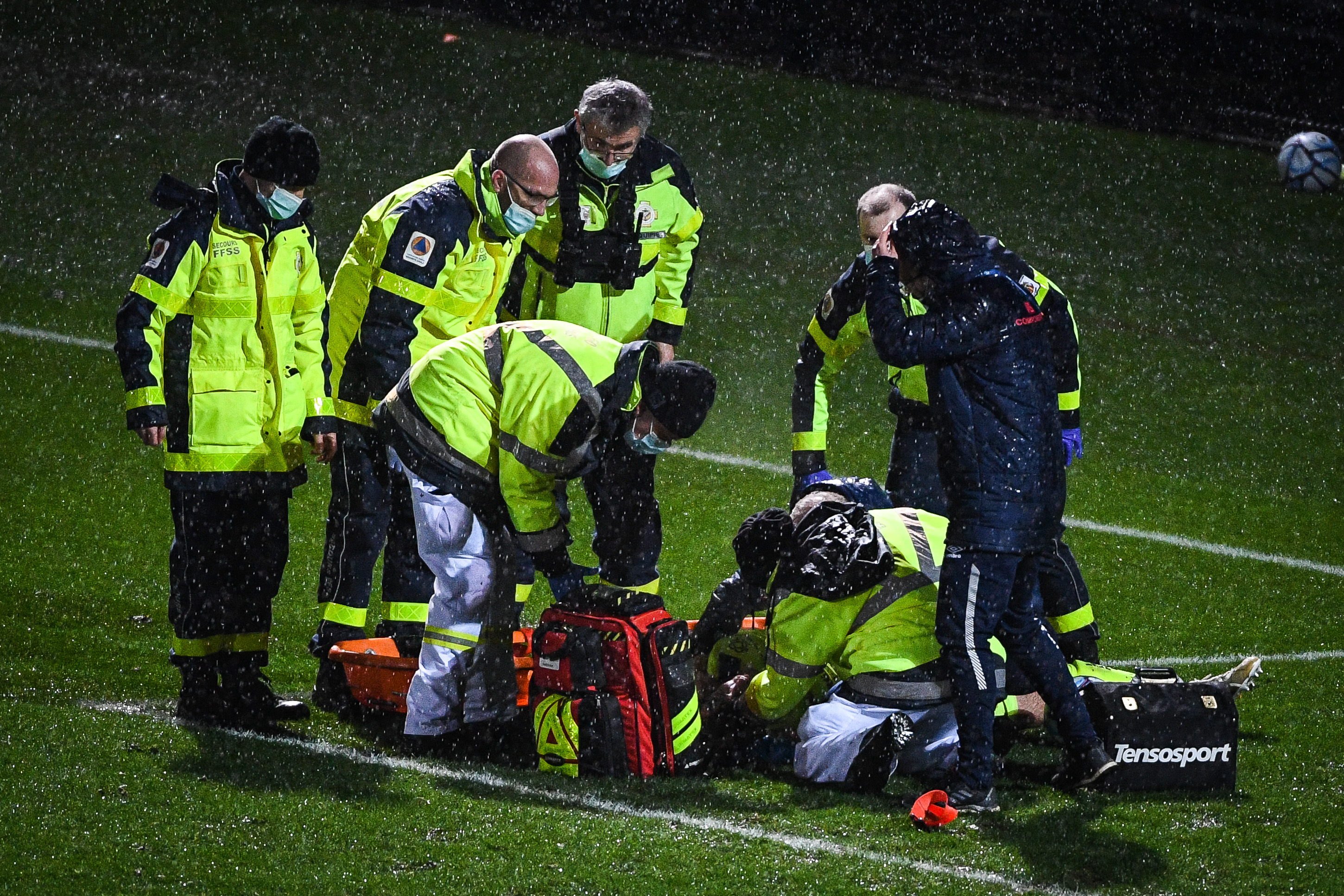 He was awake when placed on a drip for the trip to the hospital where he needed a brain scanCredit: Icon Sport – Getty 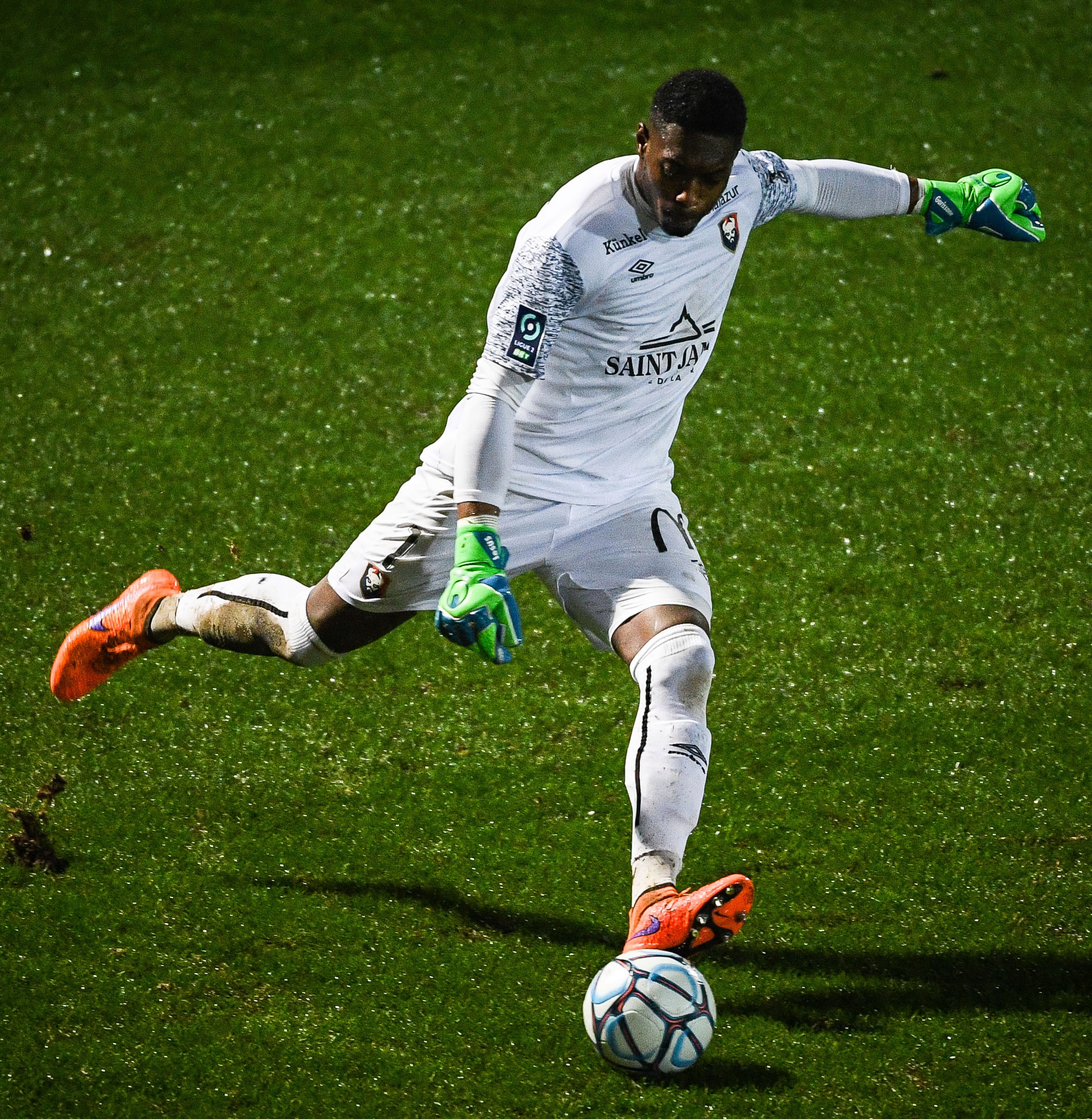 Innocent is on loan at the second-division side from Paris Saint-GermainCredit: Icon Sport – Getty