JUDE BELLINGHAM could leave Borussia Dortmund for just £83million next summer – if the entire fee is paid up front.

And Manchester City are convinced they will win what is sure to be a battle of the big guns to bring him to England.

Jude Bellingham could be available for just £83m next summer – if it’s paid in cashCredit: Getty

Liverpool have a long-established interest in the Three Lions midfielder, and believed they were favourites.

Chelsea are also big fans, while Manchester United would love him at Old Trafford, but know they need a top four finish to have any hope.

There are suggestions Dortmund want over £130m for the teenager, yet sources claim the true price could be nearly £50m less — as long as it is paid in one go.

City are certainly best-placed to do that, as well as offering the best chance of silverware – and the opportunity to link up with his old Dortmund team-mate Erling Haaland. 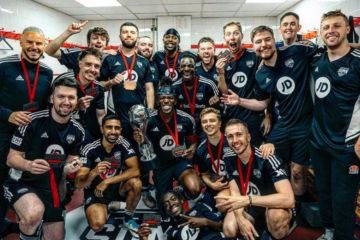 Bellingham, 19, is big pals with Haaland, and the Norwegian has told him how much he is enjoying life at his new club.

When City signed Kalvin Phillips in the summer, there was a feeling his arrival meant they wouldn’t be in the running for the England youngster.

But they have remained in the hunt for another top-level midfielder – and Pep Guardiola rates him so highly he believes Bellingham could eventually fill Kevin De Bruyne’s boots.

De Bruyne is in his thirties, Ilkay Gundogan in the final ten months of his City contract, and Bernardo Silva’s long-term future is far from assured.

Bellingham still has three years on his contract which, unlike Haaland’s, does not contain a release clause.

But he is one of the hottest properties in Europe – on Friday he was the shining light in England’s dismal display in losing to Italy – and the top dogs are circling.

City have a decent relationship with Dortmund, having recently signed centre-back Manuel Akanji from the club, as well as Haaland and Gundogan.

The Germans asked about signing Etihad youngster Liam Delap on loan in the last window, before he joined Stoke for the season, and he could be another bargaining chip.