Even Jorginho finds the idea that he could win the Ballon d’Or this year hard to accept. He did not take it as an insult when he heard Antonio Cassano, the former Italy striker, say that any journalist who votes for the Chelsea midfielder “should have his licence taken away”.

Instead of picking a fight with Cassano after finding him on an Italian beach earlier this summer, Jorginho found common ground with the 39-year-old, agreeing that it would be a scandal if he takes the Ballon d’Or off Lionel Messi. “Now I admire Jorginho even more,” Cassano said last week. “We were talking for a good 90 minutes. He is an exceptional guy: very intelligent, humble and polite.”

Thomas Tuchel is happy to go along with that assessment of Jorginho, who has remained level-headed after winning the Champions League with Chelsea and Euro 2020 with Italy. “He’s a top guy,” Chelsea’s manager said as he prepared for the trip to Arsenal . “He is funny, he has a big smile on his face every single day. You can have chats with him, you can laugh every single day with him, because he’s up for a laugh, up for a good life.

“He’s in love with this game. He never stops transmitting this energy that he’s really into thinking about tactics and loves to be involved and feel a true connection with the game. That makes him a very important player and a huge link in the middle of the pitch – not only for us but also for Italy.”

Tuchel does not doubt the 29-year-old’s quality. Jorginho may not be as glamorous as Messi, but football is about the collective. Everyone has a part to play in a successful team and Jorginho has been outstanding in recent months, a reassuring, metronomic presence in midfield, his ability to keep possession ticking making him invaluable for club and country.

Gradually perceptions of the former Napoli midfielder have changed, although it has been a slow process. English football has not always felt like a natural fit for Jorginho, who has often been the subject of furious debate among Chelsea supporters since his £50.4m move from Napoli in 2018, with some adamant that he is not suited to the Premier League and others stubborn in their defence of a cultured, misunderstood passer.

Part of the problem was that Jorginho seemed inextricably linked to “Sarri-ball” because of his connection with Maurizio Sarri, who was not a popular figure during his year in charge of Chelsea. There were good spells – Jorginho helped Chelsea win the Europa League in 2019 – but the doubts refused to go away. The Italy international seemed to lack the pace to play at the base of midfield, where he often looked defensively suspect, and he was in and out of the team under Frank Lampard, who craved a faster style of play after replacing Sarri two years ago.

Jorginho underlined his importance to Italy in their victory at Euro 2020 this summer. Photograph: Massimo Insabato/Mondadori Portfolio/Zuma/Shutterstock

It never quite clicked under Lampard and there were constant whispers about Jorginho leaving in the summer of 2020. Arsenal gave strong consideration to the move and there were also links with Paris Saint-Germain, who were managed by Tuchel at the time. “I would have picked him up personally if there was a chance,” Tuchel said.

In that context it was not a surprise when Jorginho’s fortunes changed after Lampard was sacked in January. He has been excellent since Tuchel’s arrival, his efficiency, poise and leadership proving crucial as Chelsea won the Champions League last season.

Chelsea’s Pulisic out of Arsenal derby after positive Covid test 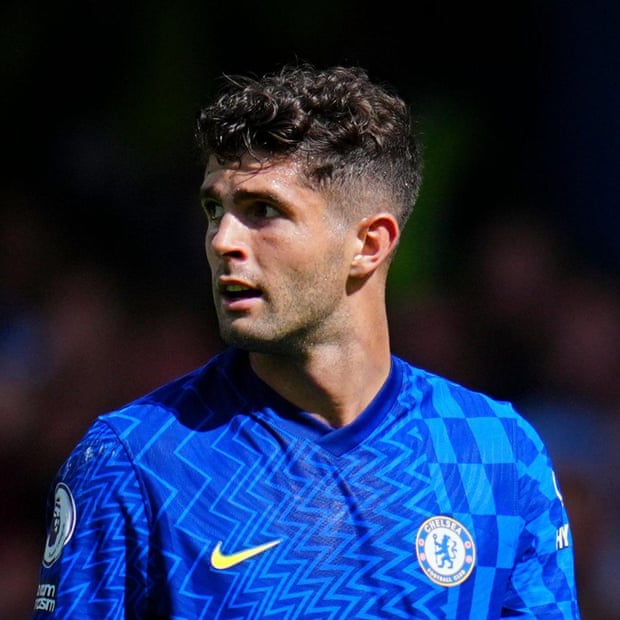 The USA forward missed Chelsea’s open training session on Wednesday, and is not available for Sunday’s game at the Emirates Stadium due to self-isolation.

Hakim Ziyech and N’Golo Kanté are both back in training, and could yet prove their fitness in time to feature in the north London derby.

“Christian’s absence is unfortunately pretty easy to explain, he had a positive test, and needs to follow the protocols,” said Tuchel. “So he was not in training and is not available for the game.”

Ziyech suffered a nasty-looking shoulder injury in Chelsea’s penalty shoot-out European Super Cup win over Villarreal, while Kanté has been out of action with an ankle issue.

But both influential Blues players will now have the chance to prove their match fitness in Saturday’s training session ahead of the Arsenal clash. PA Media

Jorginho had a fine game when Chelsea beat Manchester City in the final in May, providing balance alongside N’Golo Kanté’s relentless dynamism. It was easy to see why Tuchel loves working with him. “Jorgi is a very strategic player,” the German said. “He can imagine what is going to happen one or two passes ahead. He knows where to help out in short distances and long distances, when to switch the play, when not to switch the play. He has a good sense of rhythm.”

The key has been fitting Jorginho into the right system. After all Tuchel acknowledged that Jorginho can make errors at times. He thought back to the stray back-pass that gifted Arsenal victory over Chelsea in May and admitted the midfielder can be vulnerable against pace in the Premier League.

Yet there is a reason why managers love Jorginho. He has excelled in Tuchel’s 3-4-3 system, his positional discipline improving, and Roberto Mancini did not regret making him a key part of his Italy side. Jorginho was outstanding when Italy beat England in the final of the Euros, combining with Marco Verratti to take control of midfield, and he has continued to collect silverware after returning from a short break, helping Chelsea win the Super Cup at Villarreal’s expense 10 days ago.

Now the individual accolades could follow. On Thursday Jorginho, who had another good game when Chelsea opened their campaign with a convincing 3-0 win over Crystal Palace last weekend, joined Kanté and Kevin De Bruyne on Uefa’s three-man shortlist for men’s player of the year.

Recognition has finally arrived. De Bruyne was brilliant when City swept to the Premier League title last season and Kanté was instrumental in Chelsea becoming European champions, but it would not be a scandal if the award goes to Jorginho.

Tuchel described him as a player who makes others shine and he deserves his moment in the spotlight after his dazzling displays this year.