John Barnes on racism and society: ‘There are invisible banana skins’ | Football

“I don’t even remember doing that,” John Barnes says when, near the end of a 90-minute conversation about the deep roots and bruising reality of racism, I ask him about the moment he used his right boot, with deft and contemptuous skill, to flick a banana off the pitch in a Merseyside derby in 1988. That image of Barnes brushing aside a miserable racial insult is one of the most famous in the history of English football. It features in a splash of Liverpool red on the back cover of his new book, The Uncomfortable Truth about Racism, as well as in more sombre black-and-white on the inside pages.

Barnes moves far deeper than that snapshot of racism in football to discuss slavery, colonialism and how race remains such a problematic issue at the heart of contemporary society. He does not even mention the incident in the book and now, back in Liverpool, he explains why it was remembered by so many people who had not lived his life.

“Do you know why? Because it was Liverpool versus Everton in 1988. I had been playing [professional] football in England since 1981 when bananas were thrown on the field every day. I played for Watford against Millwall and West Ham when the same thing happened but those were not high-profile games so the press weren’t paying attention. But Liverpool against Everton made it, all of a sudden, big news.”

Rather than being a transformative moment, the way in which Barnes back-heeled a banana off the pitch was his routine response to a depressingly familiar occurrence. But Barnes himself, a brilliant footballer who is now an admirably thoughtful man willing to ask searching questions about race and society, was never depressed by the absurd prejudice of the banana-throwers.

“As much as people may focus on that moment as something unique or iconic, it wasn’t. Cyrille Regis [the striker who played for West Brom and other clubs from 1977 to 1996] said he could open a greengrocers with all the bananas that came on the field. It really meant nothing to me at all.”

When he was 20, in 1984, Barnes scored one of England’s greatest goals when he lit up the Maracanã by slaloming though the Brazil defence before he stroked the ball into the net. Barnes mentions that game when I ask him if he can pinpoint the worst moment of racial abuse in his career. “It wasn’t the worst because I was laughing at this idiot on the way to Brazil, but it might show an interesting insight. Some National Front supporters were on the plane with us when we flew to Rio. One of them was sitting just behind us because we were on a commercial flight. We didn’t even fly business class those days. These supporters were funded by the NF to follow England. We would see the National Front flag draped over their seats in the Maracanã. We had all the football journalists on the plane and no one said a word.

“Fast-forward 10 years and suddenly anti-racism programmes are starting and those same people who said nothing in 1984 are shouting from the rooftops. It’s the same today. There is lots of talk whenever there is ‘a racial incident’ but nothing really changes. Have you seen on Sky Sports that every time Gary Neville comes on in an [anti-racism advert] he says: ‘I’m in [the fight against racism].’ For the next six days we’re going to be in until the next big football match. But what about next month and next year? Nothing happens until the next incident when they go: ‘This is terrible. We must do something.’”

Barnes has written a book which reiterates that racism is embedded in society rather than just football. For the 57-year-old Barnes the insidious influence of colonialism, which so degraded black people around the world, persists. He also argues that class is just as divisive as race.

“The only way to destroy racism is to destroy capitalism,” Barnes writes. At the same time he is too much of a pragmatist to suggest some idealised socialist state will suddenly emerge. Barnes, instead, finds hope in the aim we can still be educated about the way we all carry ingrained prejudice – whether in terms of racism, sexism or issues of class, gender and religion.

“We need to talk about it educationally,” he says. “When we talk about indoctrination over a long period of time you cannot then say, all of a sudden, ‘Oh, I’m cured of my bias.’”

Barnes’s urgency in talking about race was intensified after the Sewell Report was published in March. This study by the Commission on Race and Ethnic Disparities came as a blow because, for Barnes, “the little gains made in the last 10 years could disappear now that the official government verdict is: ’Nothing to see here regarding racial inequalities due to systematic or institutional bias.’” He looks briefly deflated. “Lots of people think I prefer the old days because at least I know who is racist. I know who I can and can’t get a job from.” 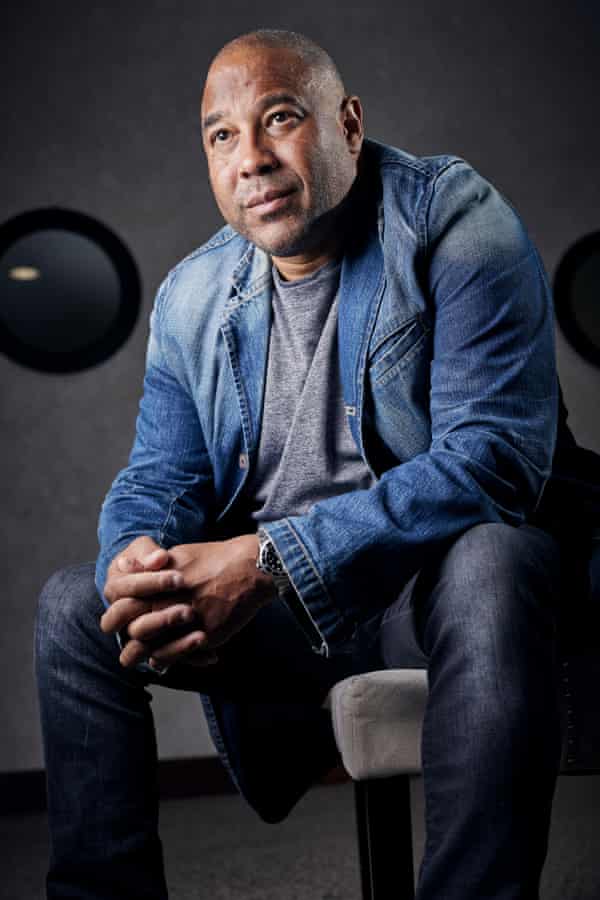 Barnes: ‘We need to be honest and at the moment I don’t think we are moving in the right direction’. Photograph: Christopher Thomond/The Guardian

In the bad old days, on the plane to Rio, would he have said anything to the National Front supporter? “No. I don’t even engage with people like that because face-to-face he would have been different. I’ve been to football matches where they’re shouting racial abuse and you go up to them. They say: ‘Oh, no, Barnesy, I was only joking.’ It’s the same today with [racist] people on Twitter. If I said ‘Fuck off!’ they’d abuse me. If I just go, ‘Ha ha, don’t worry about it, mate’ they’ll say: ‘Barnesy, you’re all right, mate, you’re great.’”

Barnes explains that even white people he likes have shown their innate racial bias. “They’ve said ‘I don’t see you as black’ or ‘I see you as normal’ as if that is a compliment. They can’t say: ‘I see you as a black person’ because in their minds, subconsciously, that equates to them seeing me as inferior. Why can’t they see me as black and normal? Why can’t they see me as the same as them or, maybe in some cases, even superior?”

He points out that while outraged attention is paid to verbal racism, the damage caused is less than that done by the silent pillars of prejudice within society. “You can’t see or prove this racism. To black people it’s happening every single day of their lives. There are invisible banana skins and unspoken words which are much more damaging.”

Barnes does not believe that wearing a Kick It Out shirt will change anything – in the same way that the idea of a football team walking off the pitch would not rip out racism rooted in society. “A bus driver does not have the option of walking off the bus and saying: ‘I’m not putting up with this’. They would be out of work and find that nobody cares about them.”

In a football context Barnes would prefer to turn the indignation expressed towards prejudiced fans in Eastern Europe or random racists on Twitter to asking questions about the enduring lack of black managers and executives in the boardroom. When I ask him about his time as the manager of Celtic, when he was appointed in June 1999 and sacked eight months later, Barnes says: “I prefer to talk about it generally because my time at Celtic had nothing to do with race. It had to do with the fact that the English don’t know much about Scottish football.

“I was a first-time manager and the perception, which is media indoctrination, is that my time was a disaster. On a 65% win rate? After Jock Stein I had the largest percentage of wins than any other first-time manager at Celtic … in the history of Celtic managers, as far as win percentages goes, I’m the fourth or fifth best manager. But I had problems from the beginning and knew it wouldn’t last. I prefer to talk about the general absence of black managers today.

“When I played you had to be better than average to get signed. Now we have lots of ordinary black players earning extraordinary money. That’s why football is probably the least racist industry – not in terms of the abuse you get on Twitter but the fact that so many black players can be worse than white players and earn more money. In what other industry does that happen? But where are the black managers?” 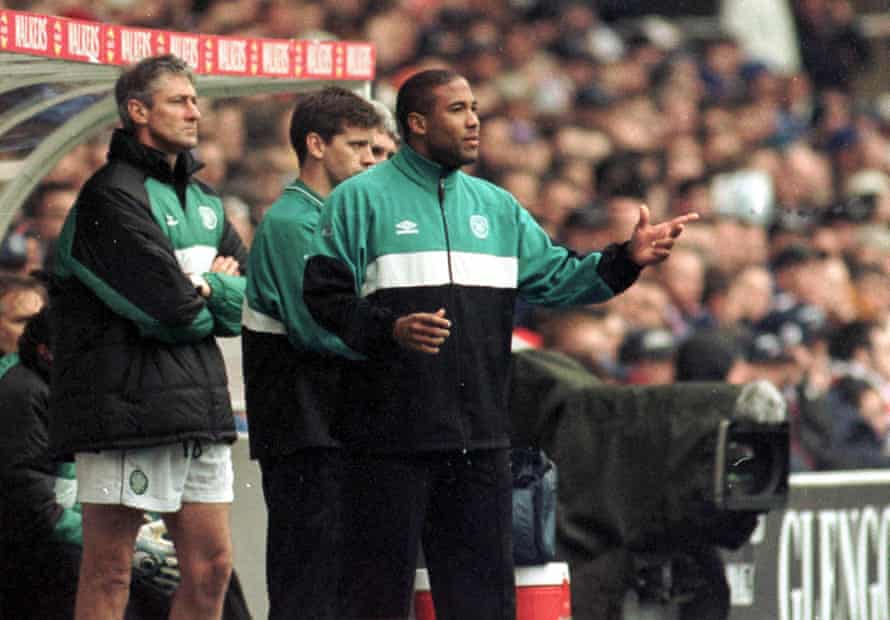 Barnes during his brief tenure in charge at Celtic. Photograph: PA Images/Alamy

Barnes had a successful and unbeaten tenure as manager of Jamaica and then a poor run with Tranmere Rovers in 2009. He was sacked after just two wins in 11 games. How many managerial jobs did he apply for after Tranmere? “About five. I’m talking about League One clubs. One of them was League Two. I got an interview with one of them. But the wider point is there are 30% black players in English football. Maybe there should be 10% black managers? Maybe 30%?”

In 2003, the NFL introduced the Rooney Rule that dictates that all teams must include black or ethnic minority candidates in interviews for any senior coaching or operations vacancy. But, as Barnes says: “Are we supposed to believe everything is better now in the NFL because the Rooney Rule is in? It came in because there were only three black coaches. Almost 20 years later there are still three black coaches. If you think everything is fair now the Rooney Rule is in you must be stupid.”

Barnes’s highly educated and privileged background in Jamaica, where his father was a senior Army officer, bolstered his self-esteem and meant that when he arrived in England at the age of 12 he could feel justifiably superior to anyone who made racist comments. “Absolutely. It didn’t bother me. The coaches would say: ‘I know they’re gunning for you but that’s it! Don’t let them think they’re getting to you.’ I would say: ‘But it really doesn’t get to me at all.’

Barnes has chosen to examine and speak about racism and all forms of prejudice from a wider historical and intellectual perspective – but as the long struggle grinds on does he ever feel disillusioned? “I don’t get disillusioned because I believe in what I and many others are doing. I only get disillusioned in terms of people just doing the same thing time and again and not making a difference. But we need to be honest and at the moment I don’t think we are moving in the right direction. I don’t think things will get better until we start making changes from a more educated and deeper perspective. We need to have these uncomfortable conversations.”

The Uncomfortable Truth about Racism is published by Headline.