JESSE LINGARD has apologised to Manchester United fans for his gaffe that cost them a Champions League point at Young Boys.

The midfielder’s woeful backpass played Theoson Siebatcheu in to make it 2-1 to the hosts in the fifth minute of second-half stoppage time.

Jesse Lingard has broken his silence after his gaffe handed Young Boys a Champions League win over Man UtdCredit: Getty 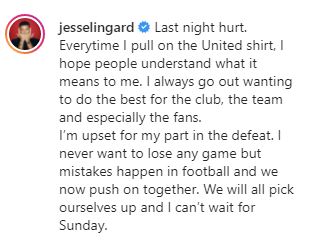 The midfielder posted a statement on social media

Lingard, 28, came in for criticism from all angles after the error and has fronted up to it on social media.

And the former West Ham loanee wrote: “Last night hurt. Every time I pull on the United shirt, I hope people understand what it means to me.

“I always go out wanting to do the best for the club, the team and especially the fans. I’m upset for my part in the defeat.

“I never want to lose any game but mistakes happen in football and we now push on together.

“We will all pick ourselves up and I can’t wait for Sunday.”

Cristiano Ronaldo gave the Red Devils the lead after just 13 minutes in Switzerland on what looked set to be an easy opening night outing in the Champions League.

Rio Ferdinand, 42, went in two-footed as he assessed the game for BT Sport and compared it to last season’s embarrassing defeat in the same competition away to Istanbul Basaksehir.

He said: “This is Basaksehir all over again. It’s a big mistake from Jesse.

“Wherever you go in Europe you’ve got to be on your game.”