I was surprised Arsenal didn’t sack Mikel Arteta, but now he’s made them the Premier League’s most exciting side

THE scenes on the London Underground on Sunday night resembled a cross between the liberation of Paris and a San Antonio foam party.

Jubilant Gooners cavorted on the Tube, singing their hearts out about ‘Super Mik Arteta’, startling supporters of something called the Green Bay Packers, who had been watching an NFL match at the Tottenham Hotspur Stadium. 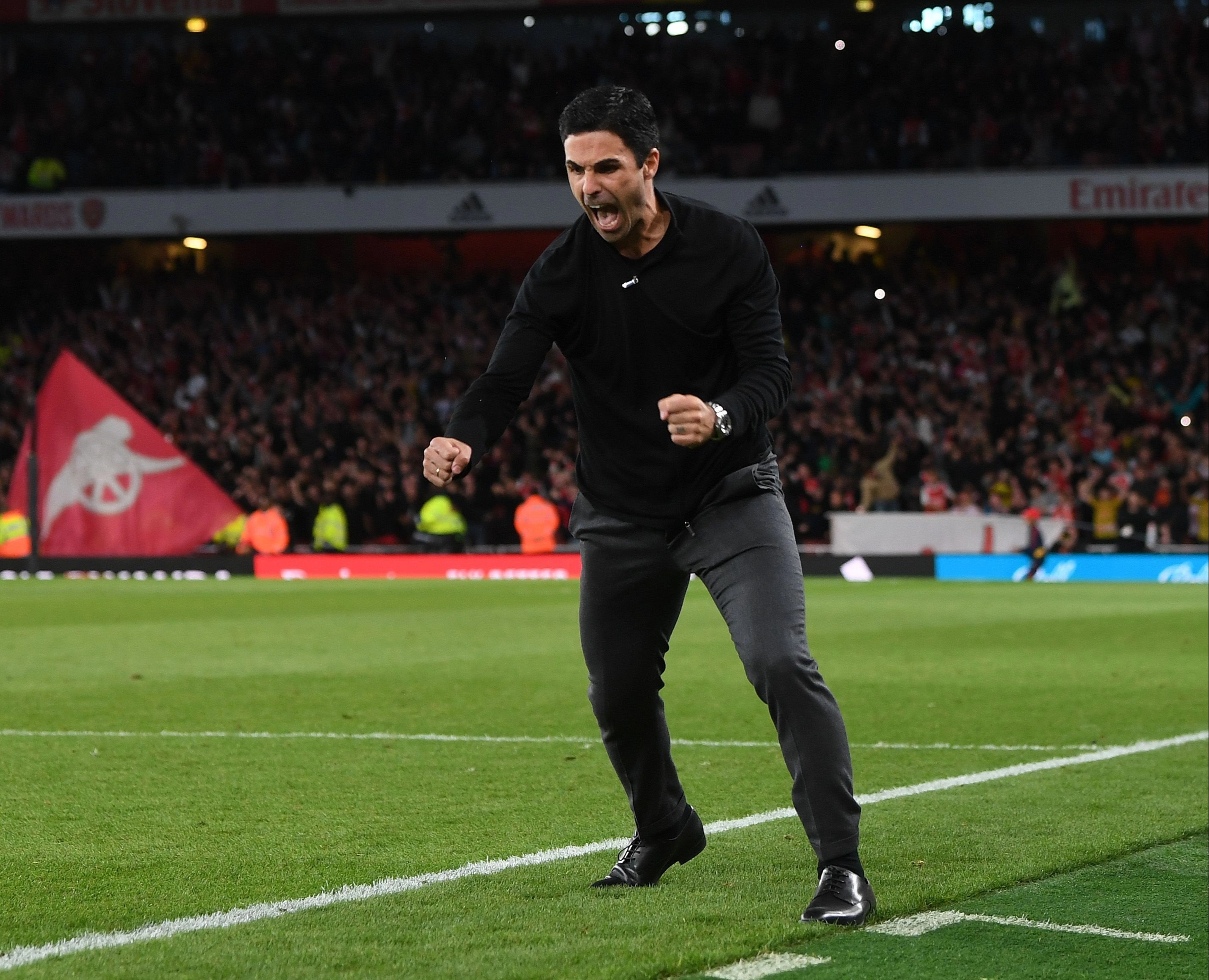 Mikel Arteta has transformed Arsenal into the Premier League’s most exciting teamCredit: Getty

They were wearing hats shaped like cheeses on their heads – yet they seemed like the sane ones in that Tube carriage.

Arsenal had defeated Liverpool in a thriller, they had usurped Manchester City at the top of the Premier League and nobody had wanted to leave a raucous Emirates Stadium — a ground which is usually half-empty before the full-time whistle, win, lose or draw.

As probably the only sober man in the Tube carriage, it would have been easy to silently mock them all for getting carried away and allowing a little success to go to their heads.

But this is football and football is escapism and life is hard right now. Even in Islington.

So I almost cracked a smile when the bloke next to me started wondering aloud whether Arsenal might win their first Premier League title in 19 years this season.

“Only if Erling Haaland snaps a hamstring,” replied his mate. But even that felt far-fetched. Hadn’t Manchester City won the title for the last two years without a centre-forward?

Some at City speculated last season that boss Pep Guardiola had not pursued Harry Kane too hard because winning the title was becoming too easy and he wanted to prove he could do it without an authentic striker.

On Sunday, a gag was doing the social-media rounds that Guardiola — bored of City being too good — had created his own title rival, his former No 2 Arteta, and then handed him a couple of decent players in Gabriel Jesus and Oleksandr Zinchenko just to make things more interesting.

When Arsenal were in the bottom six of the Premier League the Christmas before last, and the Gunners board insisted on standing by their man, when all conventional wisdom suggested he would be sacked, it felt weird that they would show such faith in a man with no managerial track record.

I mentioned that, yes, Arteta had been a successful assistant to Guardiola but that Paul Daniels’ assistant Debbie McGee didn’t do magic tricks. I also wrote that Arsenal’s technical director Edu was on hallucinogens when he started preaching about the need to have faith in the club’s long-term project — and many Gooners felt the same.

But having been backed in his darkest hour, and afforded the patience to turn things around, Arteta now enjoys a feeling of complete authority.

He is no longer considered an over-promoted No 2 but a visionary, who has allied some of Guardiola’s best footballing principles, with a supreme belief in youth — always a popular policy with both supporters and boards of directors.

Had Arsenal started this campaign poorly, we’d have all been sniggering about Arteta’s team talks on Amazon Prime’s behind-the-scenes ‘All Or Nothing’ documentary.

These amusing set-pieces — all business-manual gimmicks mixed with foul-mouthed tirades — make Arteta look like the illegitimate son of David Brent and Roger Mellie the Man on the Telly. But the funniest thing of all is that they actually seem to work. Apparently, elite young footballers lap up this stuff. 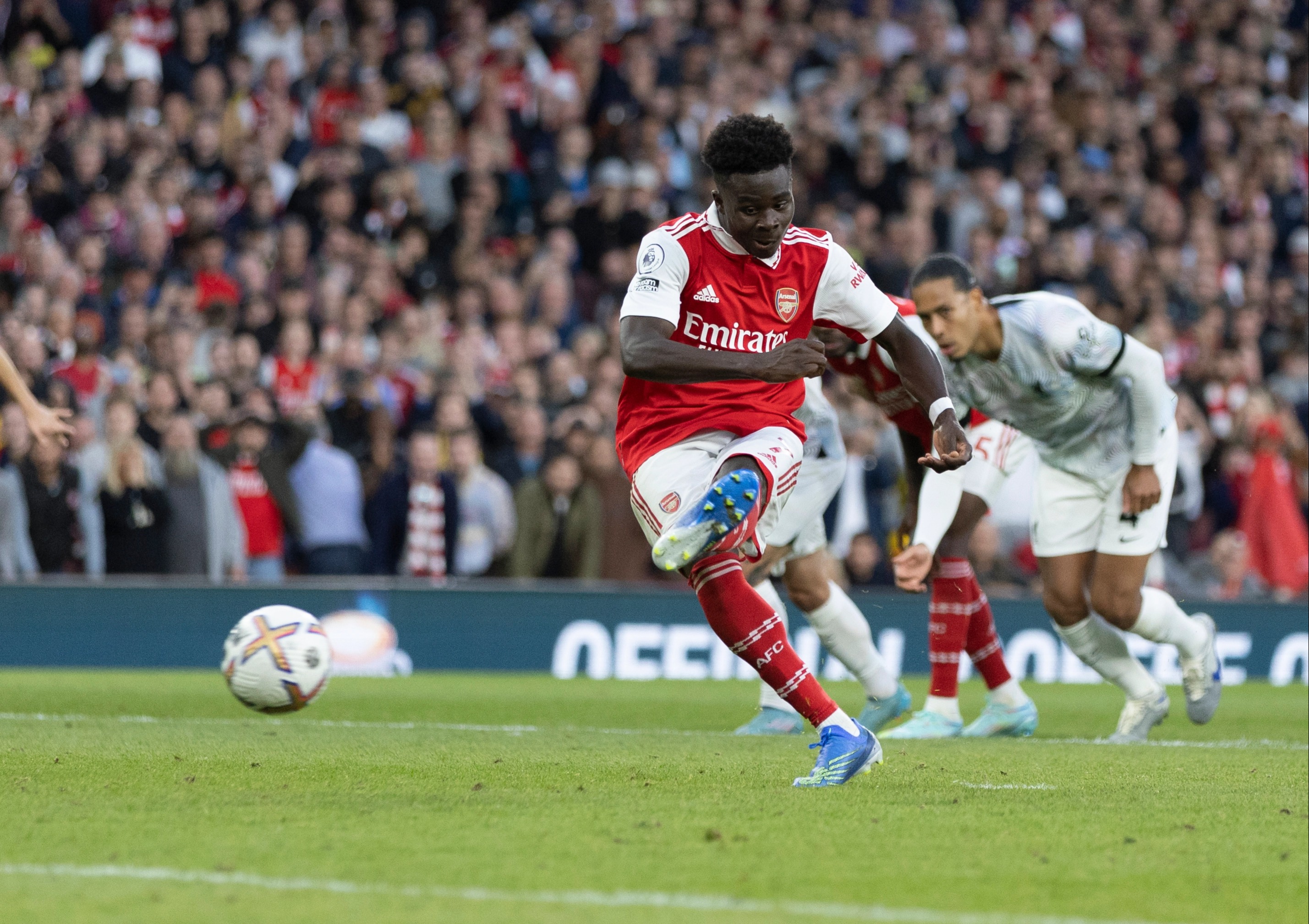 Bukayo Saka kept his nerve from the spot to fire Arsenal to victoryCredit: Richard Pelham / The Sun

Whatever gets you through the night, baby.

Because Arteta has delivered a team who are not just top of the Premier League but also its most enjoyable watch — as a front four, Bukayo Saka, Martin Odegaard, Gabriel Martinelli and Gabriel Jesus are poetry in breakneck motion.

Sure, City are better than Arsenal. But as a neutral, they are too predictable.

Arteta’s team does not feel like City Lite, more like City with the thrill of the unknown.

It is a shame that City’s visit to the Emirates, originally scheduled for Wednesday week, has been postponed due to the fixture pile-up.

Because, with Arsenal so buoyant, that would have been one hell of a game and also a great barometer as to whether Arteta’s side are for real as title contenders.

They do not possess City’s extreme wealth, their squad depth or their shedload of recent trophies.

A couple of key injuries and they could fade away. Arteta would bite your hand off for a runners-up spot now, with even a fourth-place finish representing ‘job done’.

But that is all cold, boring, clear-headed realism.

Instead, let’s allow the boys and girls on the Sunday night love train the chance to dream their fantastical dreams.