Lionel Messi is impatient to start work on the task of winning trophies with Paris St-Germain after his departure from Barcelona. The 34-year-old has signed a two-year deal with the option of a third at the Ligue 1 club.

“You all know about my exit from Barcelona and it has been a very hard moment after so many years,” Messi told a press conference at the Parc des Princes. “It was a difficult change after so long a time. But the moment I arrived here I felt very happy and I really want to begin the training sessions – I want it to be quick … I have this will to play. I am really impatient.

“I still want to win, as I did the first moment of my career. I feel this club is ready to fight for all the trophies. This is my goal, I want to keep growing and keep winning titles and that is why I came to this club.”

PSG’s president, Nasser al-Khelaifi, said the signing of Messi represented “an amazing and historic day for the club, for the football world and for us” and that it fell in line with financial fair play rules.

“We are always attentive to financial fair play,” he said. “It’s the first thing we check with the commercial, financial and legal people to see if we can do it before signing someone

“I think the media need to focus on the positives and not just the negatives of these moves, but what positives he brings. He’s an unbelievable asset to the club.”

Khelaifi said people would be “shocked” by the financial revenues Messi would bring the club, though he quipped: “I hope Leo will not ask for more salary.” 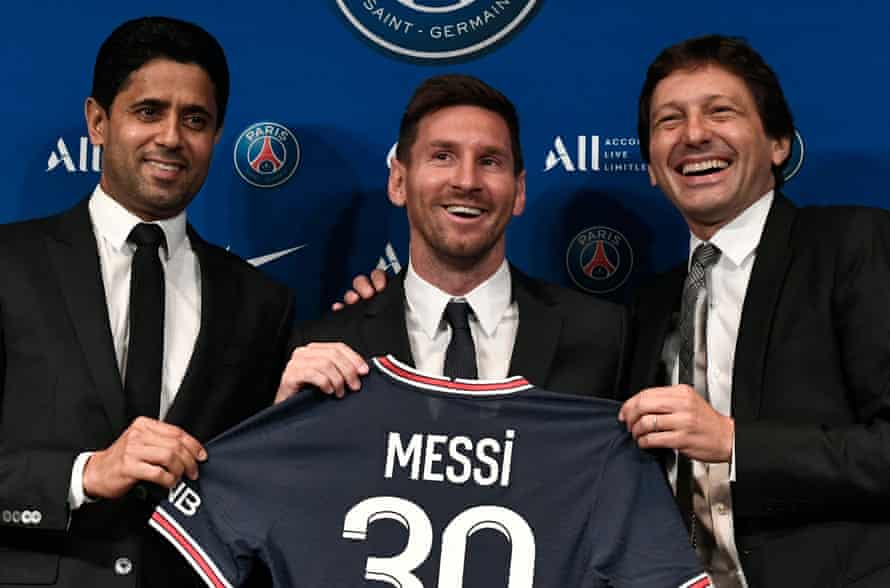 Messi admitted he had considered the prospect of having to face Barcelona if PSG are drawn against them in the Champions League. “Barcelona is my home, I have been there since I was a kid and I’ve lived so many things there,” the Argentina international said.

“I don’t know if we are going to face each other – it would be very nice to go back to Barcelona. It will be very strange to play at home there in Barcelona with another shirt but it can happen and we will see.”

Khelaifi believes Messi’s arrival will be decisive in keeping the 22-year-old France striker Kylian Mbappe, whose contract expires next year.

“He wanted a competitive team and I think we have the most competitive in the world so there is no excuse for him now, he can’t do anything else but stay,” he said.