Something strange is happening at West Ham. After years of dysfunction, they have started making so many sensible decisions you want to check if they are the same club who once thought trusting Avram Grant to save them from relegation was a smart move.

The change in the atmosphere around the London Stadium is remarkable. This time last year West Ham’s fans were up in arms after Grady Diangana’s move to West Brom. Even the club captain, Mark Noble, voiced his displeasure and, coming off the back of a troubled campaign, it seemed the relationship between West Ham’s board and the fanbase was broken beyond repair.

Admittedly, the resentment that has simmered since the move to Stratford in 2016 has not completely gone away. Last season’s sixth-placed finish has not killed the dissatisfaction with West Ham’s owners, David Gold and David Sullivan, and the vice-chair, Karren Brady, which is clear from plans for a “GSB Out” protest before the home game against Brentford on 3 October.

Hammers United, the fan group organising the march, talks of trust, loyalty and heritage being destroyed. It is adamant its desire to see Gold, Sullivan and Brady leave is not about results.

Nonetheless, the timing feels odd. The outlook has changed in the 19 months since Hammers United last protested. West Ham were fighting relegation back then, but they are flying now. David Moyes has fashioned a committed, talented side and accusations over a lack of ambition are hard to justify when West Ham are about to begin their Europa League campaign against Dinamo Zagreb at Stadion Maksimir on Thursday.

The retort is that qualification for the main draw of a European competition for the first time since 2006 has come in spite of the board. If it is fair to criticise much of what Sullivan and Gold have done since buying the club in January 2010, it is right to acknowledge evidence they are learning.

David Moyes has done an outstanding job since his return to West Ham in December 2019. Photograph: Jed Leicester/Shutterstock

Much of that comes down to admitting it was a mistake not to appoint Moyes at the end of his first spell in May 2018. Hiring Manuel Pellegrini instead was an expensive waste of time. West Ham were crying out for stability and Moyes has done an outstanding job since his return in December 2019.

The Scot offers a clear vision. In his first transfer window, he made West Ham more robust in midfield by signing Tomas Soucek and he increased their intensity in attack by dipping into the Championship for Jarrod Bowen. They were smart buys, strengthening obvious areas of weakness, and they underlined Moyes’s determination to target young, hungry players who are never going to view West Ham as an easy retirement home.

Once so scattergun, West Ham’s recruitment has become shrewder under Moyes. He does not want to buy for the sake of it. Unable to find value in the market, he has refused to sign a striker in the past two windows, leaving West Ham with the injury-prone Michail Antonio as their only senior forward. 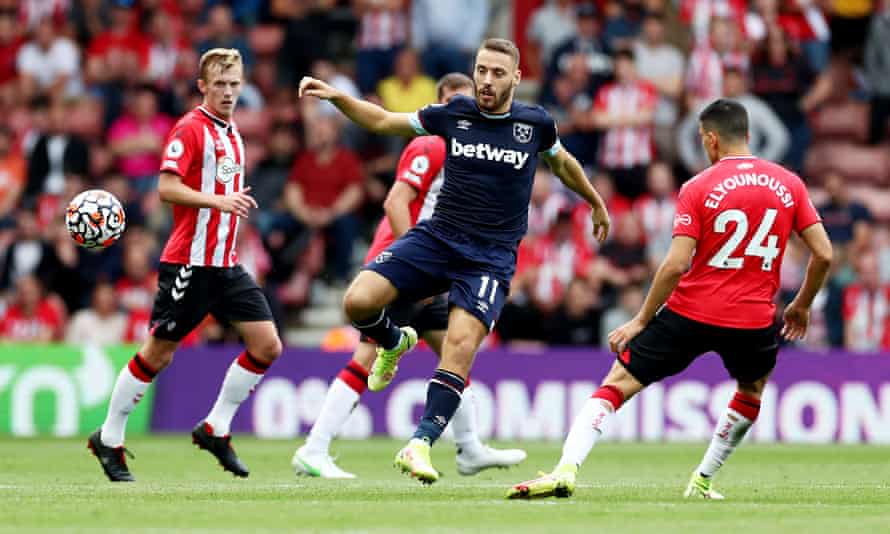 That such compromises are still required are a reminder of past errors. West Ham rue their excesses under Pellegrini. The squad is light because Moyes has had to trim the fat and has been unable to raise much money through sales. The two most expensive signings in West Ham’s history, Felipe Anderson and Sébastien Haller, left at huge losses this year.

Yet West Ham have moved on, learning to be patient. There was no panic during the summer. West Ham waited until the window was almost shut and then made their move, signing Kurt Zouma for £29.8m, Nikola Vlasic for £25m and Alex Kral on loan.

There was a plan. Alphonse Areola, signed on loan from Paris Saint-Germain, could usurp the 36-year-old Lukasz Fabianski as West Ham’s No 1 goalkeeper. Zouma will make the back four tougher to breach after joining from Chelsea. Kral, a 23-year-old Czech Republic midfielder, offers cover for Soucek and Declan Rice. Vlasic, an exciting attacking midfielder, lessens the disappointment of missing out on Manchester United’s Jesse Lingard, who shone on loan for West Ham last season.

Trust in Moyes was key. Sullivan, the board’s most powerful figure, has become less involved in transfers, focusing instead on providing his manager with a better infrastructure. The appointment of Rob Newman, formerly of Manchester City, as head of recruitment this month and the arrival of Marc Rochon as an analyst are positive steps.

There is still much to prove. Next summer will bring a fight to keep Rice from Chelsea and Manchester United. For all their progress, West Ham remain a long way from breaking into the elite. They are low on European know-how and will have to deal with a hostile atmosphere when they face Dinamo, who stunned Tottenham in the last 16 last season. Mislav Orsic and Bruno Petkovic are threats for the hosts and there is no guarantee West Ham will make it through a group that also contains Genk and Austria Vienna.

This is what fans were promised when West Ham moved into the London Stadium. This is the moment they have been waiting for since leaving their spiritual home and everything that has come before this point – the relegation battles, the pitch invasion against Burnley, the running track – will not matter a jot when the side steps out into the Zagreb air.