ENGLAND boss Gareth Southgate has some big decisions ahead as he picks his 23-man squad for the European Championships that start in June.

And the decisions won’t get any easier as the 50-year-old then has to pick a starting XI and favoured formation for the tournament opener against Croatia on June 13. 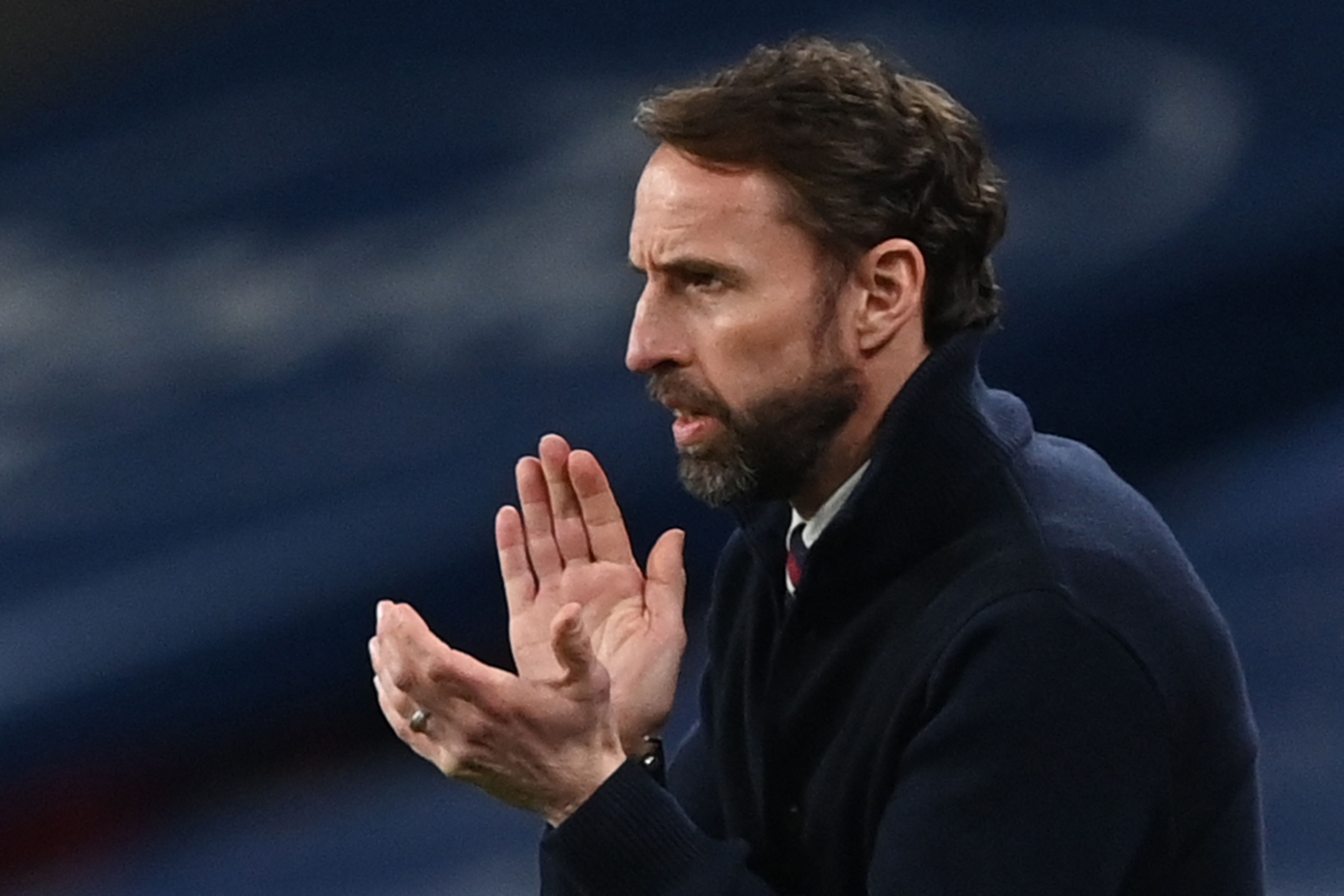 Gareth Southgate is set to make, and break, player’s dreams for the EurosCredit: AFP

Here, four of SunSport’s esteemed reporters give their squads and starting XI for the Euros. 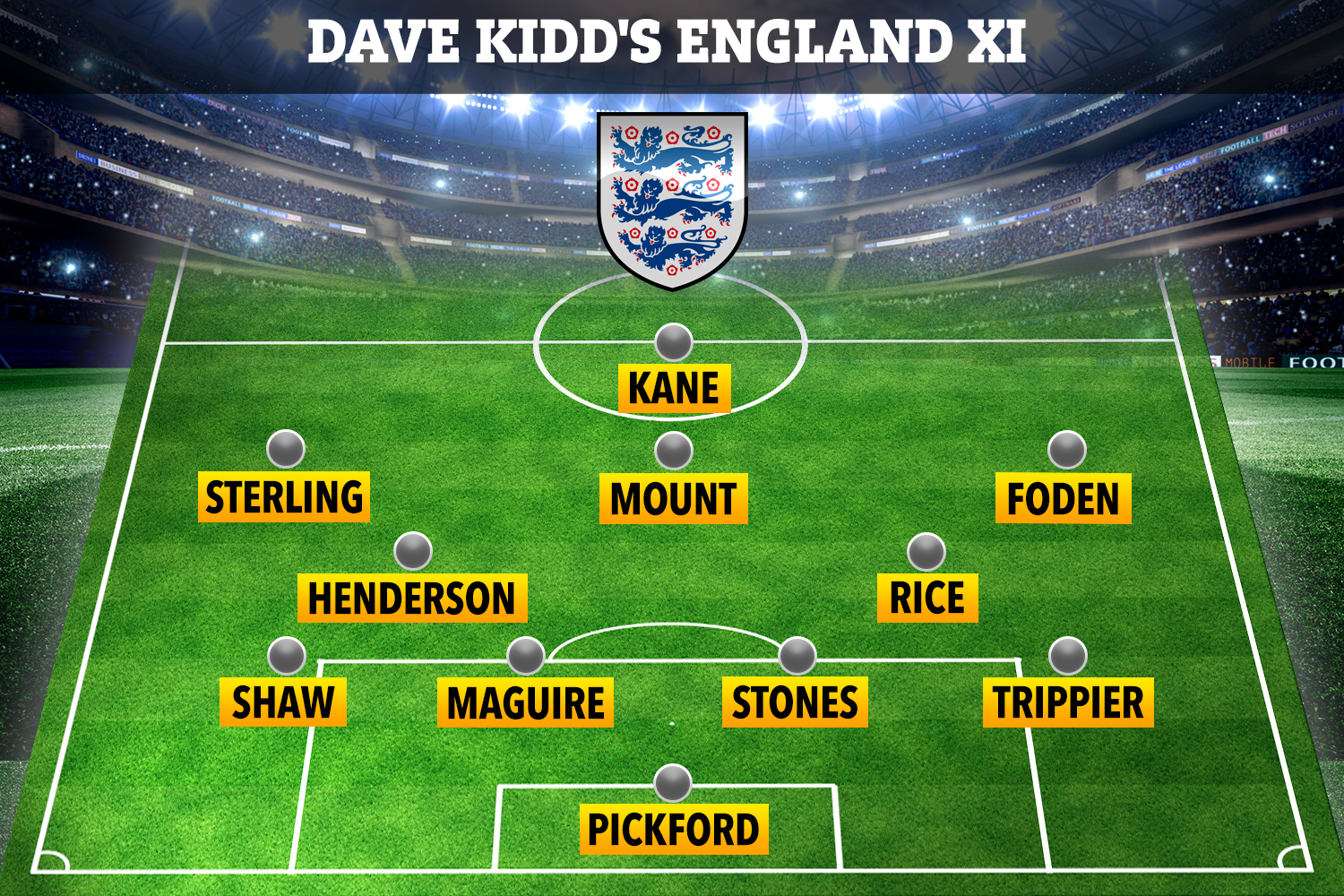 THERE are some tough decisions to make – especially at right-back and in wide areas, where England have a wealth of talent.

Reece James, Jadon Sancho and Jesse Lingard may all make Southgate’s squad and Kalvin Phillips certainly will, but they all miss out on my 23.

And Trent Alexander-Arnold’s absence has certainly caused ire on Merseyside but he is now relying on injuries to make the squad.

The starting line-up is slightly easier, going with Southgate’s preferred 4-2-3-1 – although Kyle Walker and Jack Grealish will be pressing hard for starts. 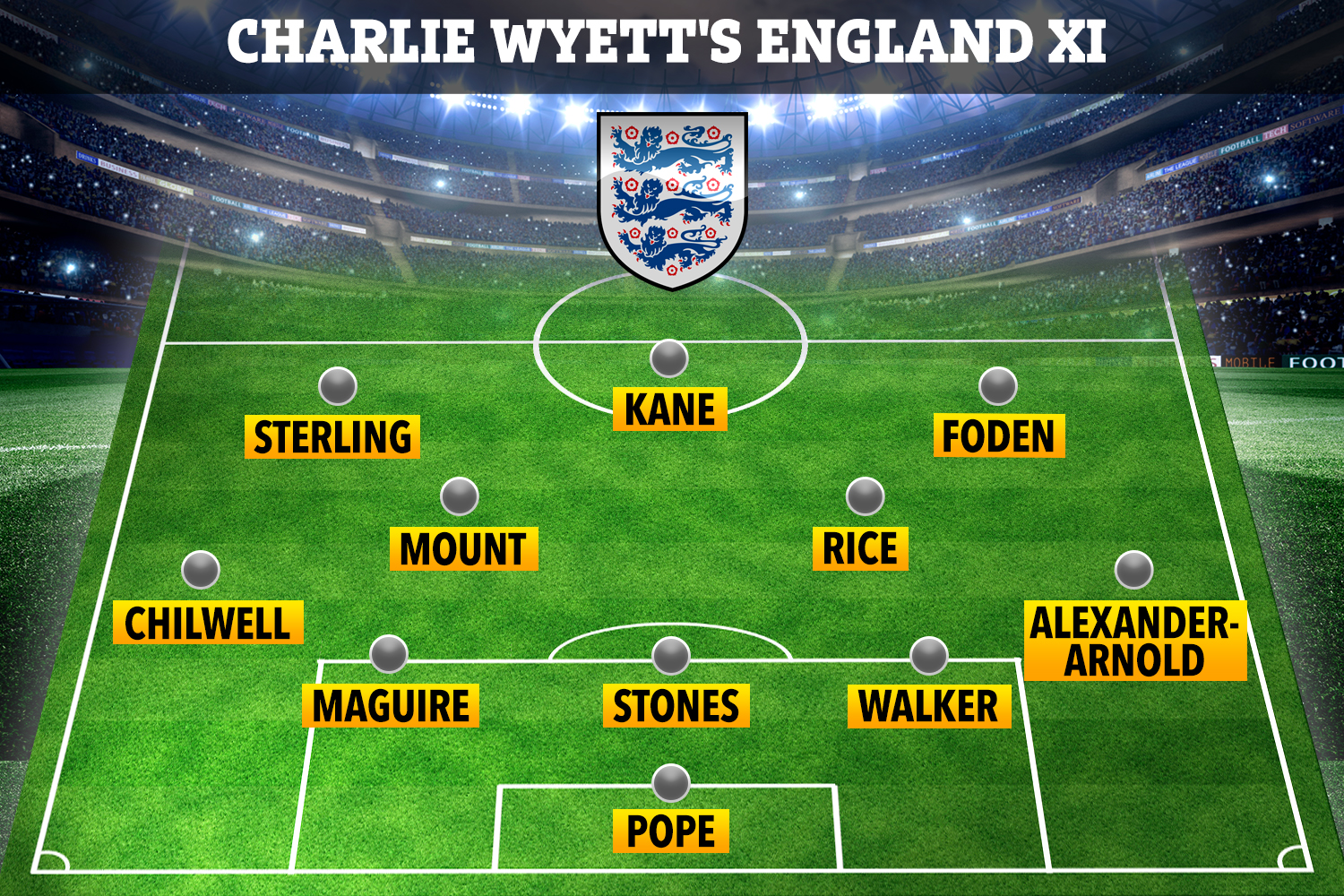 SOUTHGATE should revert to a back three with wing-backs for Euro2020. And I would still start Trent Alexander-Arnold.

My formation would be different if Jordan Henderson was definitely going to be fit and ready but this seems unlikely.

But the current central midfield is not experienced enough to give protection to the defence so I would have three at the back and use Alexander-Arnold’s attacking ability along with Ben Chilwell’s.

We keep talking about playing to our attacking strengths. But like Portugal in 2016, we have to concentrate on not conceding first and the rest should follow.

Up front, Phil Foden gets in ahead of Marcus Rashford.

Jude Bellingham should scrape into Southgate’s squad of 23 as he offers something different.

I don’t think Jordan Henderson will be 100 per cent fit and on too many occasions – although not the last World Cup – England have taken injured players.

Jack Grealish, Jadon Sancho and Eric Dier, because of his versatility, all squeeze in. No place for James Maddison, Bukayo Saka, Kieran Trippier or Reece James. 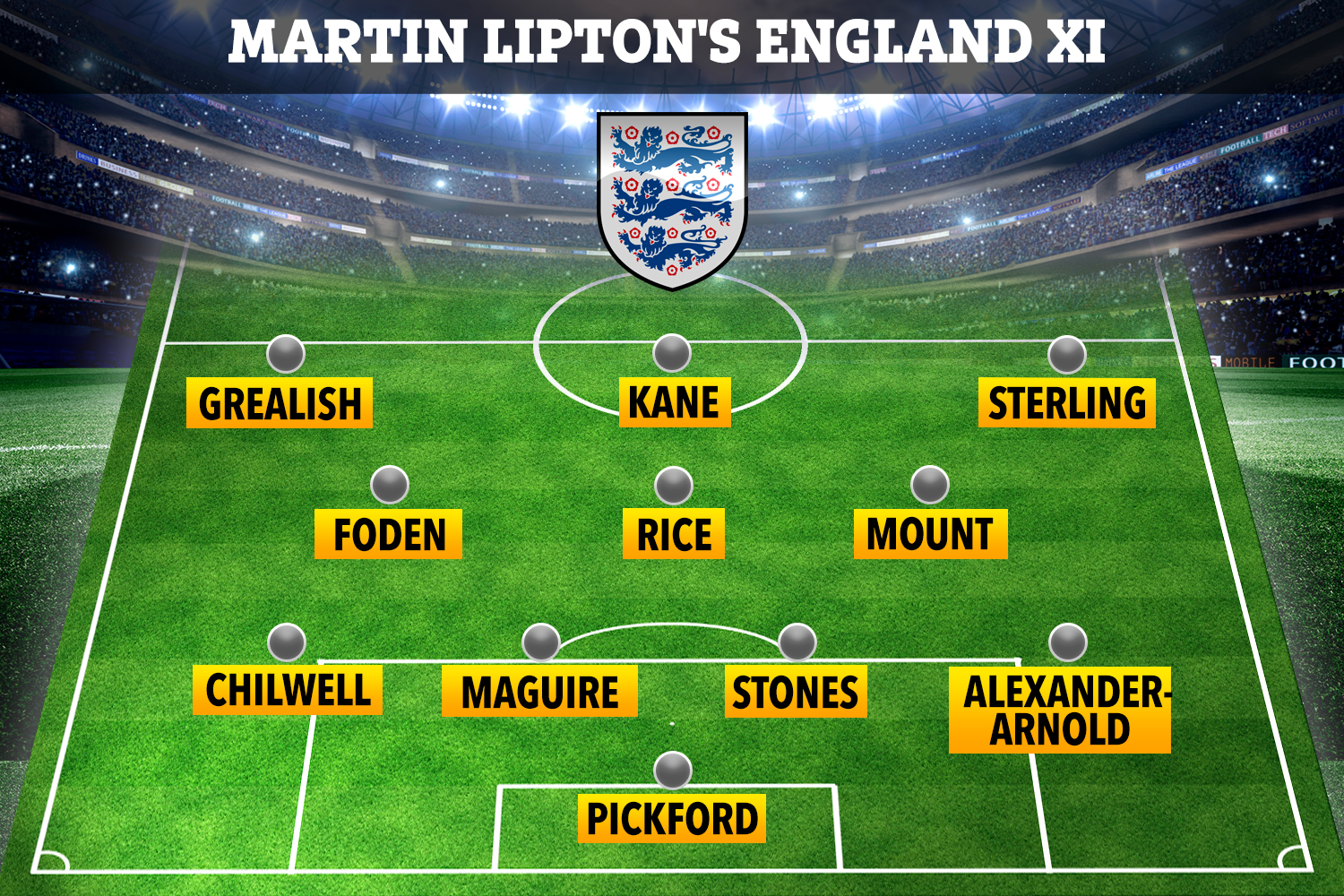 IF England are going to win, they need to utilise their best assets – attacking.

The more forward options, the better. No places for Walker, Coady, Phillips or Shaw in my squad, with Trippier the cover full-back allowing me to go with the youth and exciting potential of Saka and Bellingham.

Toughest cut is Shaw – ironic as he went to the 2014 World Cup as a teenager instead of Ashley Cole. But Saka is too good to omit.

I need to get Grealish’s creativity into the side and am backing Mount and Foden to work back alongside Rice when required. 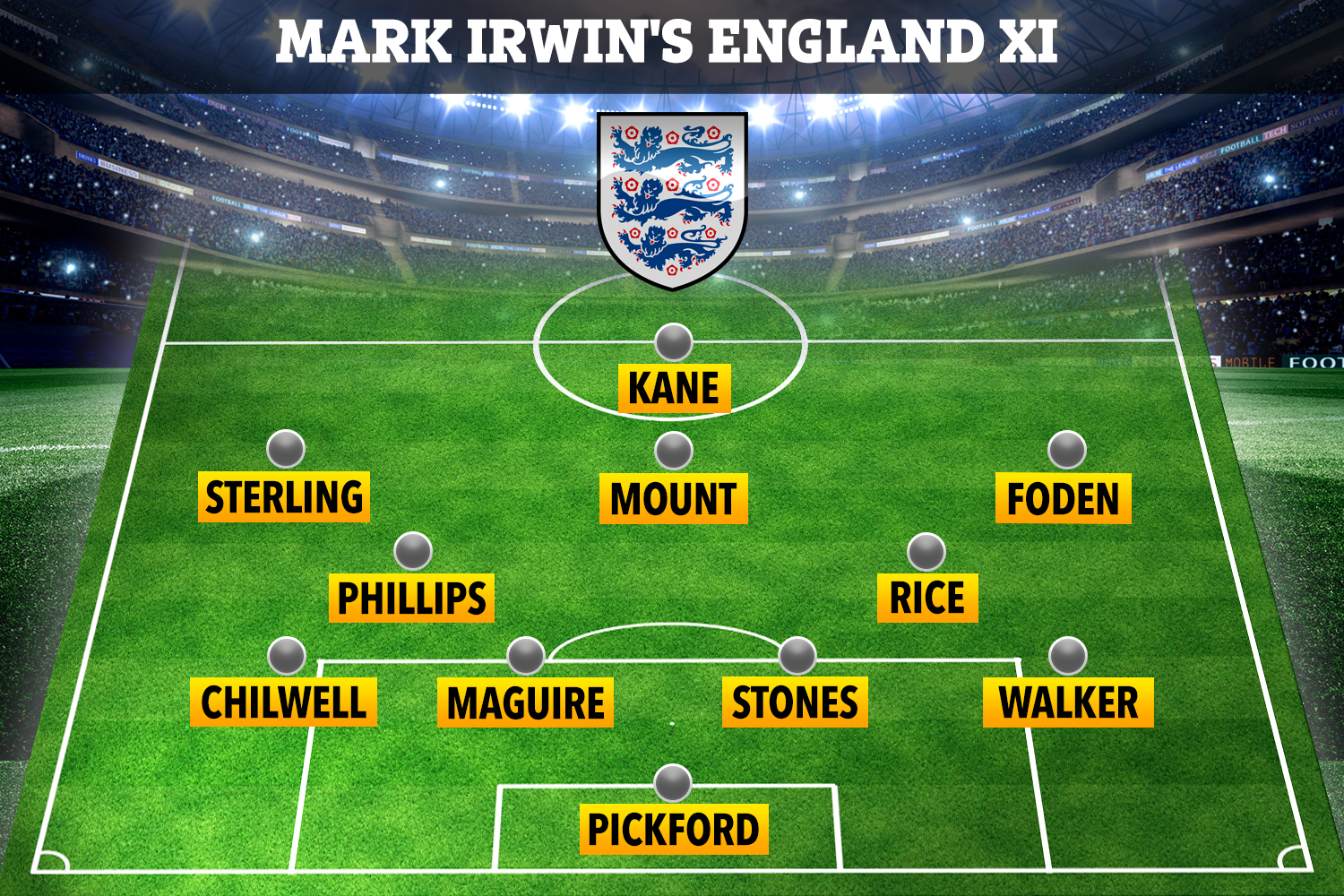 SOUTHGATE will be tempted to revert to a back three after seeing this week how easily a back four can be damaged by one defensive lapse.

But picking an extra central defender limits the team’s attacking options and sends out negative signals to the opposition.

Pickford definitely returns in goal because of his superior distribution and Stones stays at centre-half despite his propensity to occasionally switch off.

I was tempted to omit Jordan Henderson as there is no guarantee he will be completely match fit in June following his long lay-off.

But there is a real lack of midfield leadership without the Liverpool captain and even if he isn’t ready to start at the Euros his big match experience will be crucial to the squad.

Jadon Sancho and Mason Greenwood haven’t done enough in recent months to warrant a place in my squad although you could argue that having Foden, Grealish, Mount and Maddison ahead of Ward-Prowse or Winks is a bit too gung-ho.

Cristiano Ronaldo’s mum Dolores in tears as she reveals Cristiano Jr, 10, begged her not to die after stroke