‘He likes to dictate the play’

Roy Keane has singled out James Garner for praise after Nottingham Forest’s 1-0 defeat against LiverpoolCredit: PA

Forest had previously beaten Arsenal and Leicester en route to the last-eight of the oldest competition in world football, with Garner a key man for the Championship side.

And ex-United and Forest midfielder Keane has piled praise on Garner ahead of a potential return to Old Trafford this summer.

Speaking on ITV, Keane said: “He’s been [in] a really good partnership with [Ryan] Yatesy, they complement each other very well. 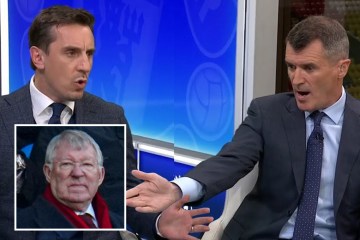 “Tough game for him today, this is a great experience for young players coming up against top players like Liverpool.

Garner has played 36 times for Forest this season, scoring three times as part of a defensive-midfield pairing.

United, too – under Ole Gunnar Solskjaer and Ralf Rangnick – play two deeper midfielders, with Scott McTominay and Fred often given the nod in those positions.

However, their form has been patchy, with Red Devils fans calling for new faces in that area.

With Garner going from strength to strength, he could be given a shot under new management next season – with the likes of Mauricio Pochettino and Erik ten Hag linked with the role.

However, United are chasing some big names to bolster their midfield ranks this summer, with the likes of Kalvin Phillips, Declan Rice, Jude Bellingham and John McGinn all linked.

That could see Garner’s path to the first-team blocked.

And with the likes of Leeds, Southampton and Everton rumoured to be interested, Garner could well quit the club for good.

Teacher sacked for saying gay people have the ‘DNA of satan’