ERLING HAALAND is being tipped to break Premier League goalscoring records after just ONE GAME in the competition.

And the bad news for defenders is that he is still settling in at Manchester City — according to his new team-mate Ruben Dias. 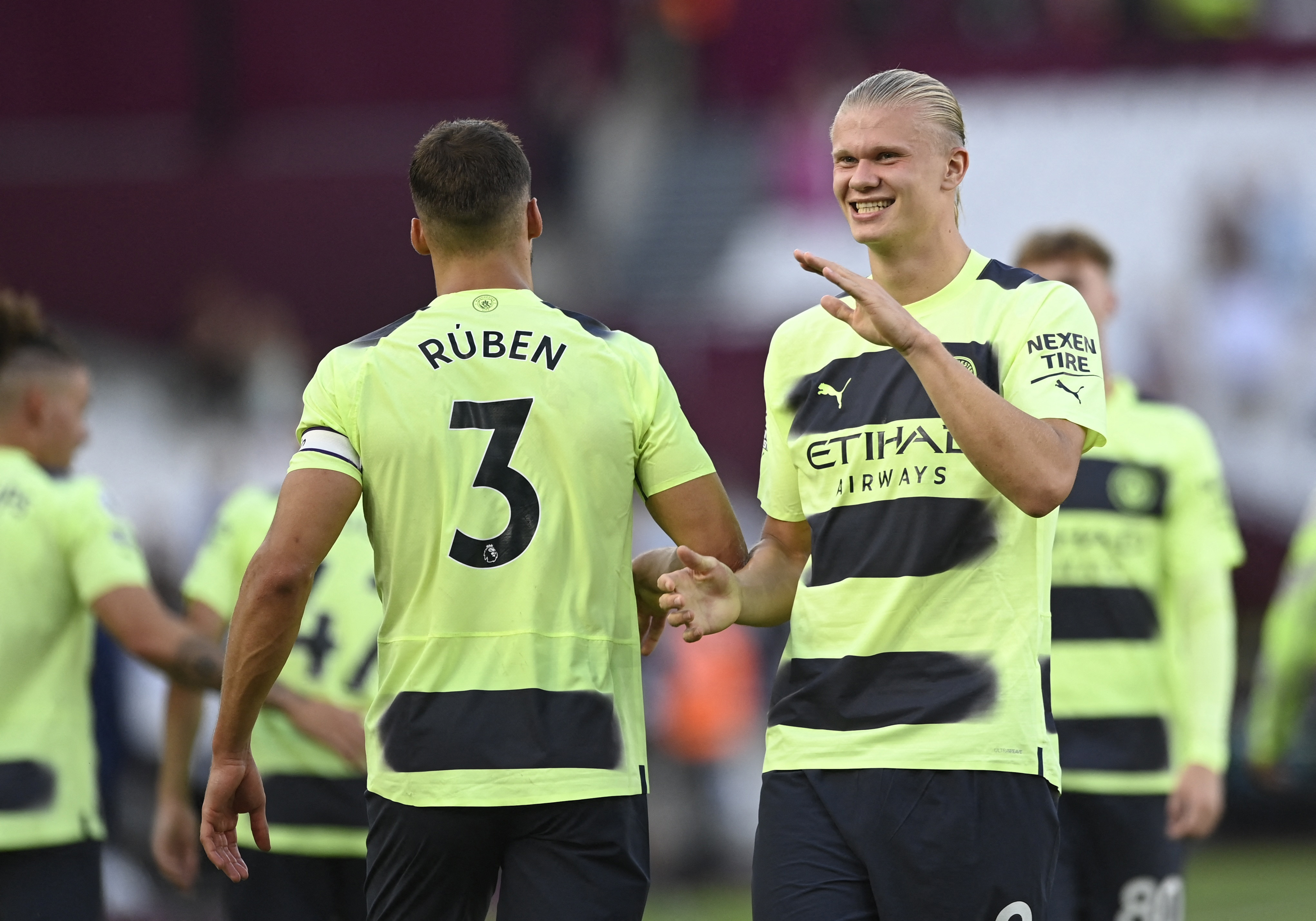 The striker got two on his Premier League debut against West HamCredit: Reuters

Before and after his devastating full debut at West Ham on Sunday, the greatest goalscorers of recent years were lining up to have their say.

Alan Shearer jointly holds the record for the most Prem goals in a season with his 34 back in Blackburn’s title winning season of 1994-5.

The Newcastle legend added: “An incredible start to his Premier League career. He will score a ton of goals in that City side if he stays fit.”

Wayne Rooney is second only to Shearer in the all-time list with 208 and has tipped Haaland to score a goal per game in Pep Guardiola’s team.

Ahead of the West Ham game, Rooney wrote: “He has 175 goals in 222 appearances to his name. Given the number of chances City create, I think he’s capable of scoring a goal per game in England and winning this season’s Golden Boot.”

Guardiola’s big money signings have often taken a while to settle — needing a season to really find their feet.

Record £100million buy Jack Grealish is a prime example but the same could be said of Riyad Mahrez, Rodri and Joao Cancelo among others.

Yet during the pre-season friendly against Bayern Munich in Green Bay and also at the London Stadium on Sunday, the signs are Haaland has slotted straight in to his new side.

Centre-back Dias believes the £51.4m star still needs time to get used to his new team-mates and vice-versa.

But the Portuguese, 25, does not believe it will take him long and has urged the rest of Guardiola’s squad to help him settle quickly.

“I’m very happy for him for having scored the two goals today in his first Premier League game.

“It is going to be great for his confidence as well and for the team because we know what he can give us.”

The only other City player to score twice on his Prem debut was a certain Sergio Aguero, who went on to score a whopping 258 more in the following ten years.

Boss Guardiola found a way to win back-to-back titles at the  Etihad without the deadly Argentine, who featured in only a handful of games.

Yet on Sunday, there was a glimpse of what the champions will be able to do with a recognised No 9 in their team.

Dias added: “On Sunday we saw the sort of help Haaland can bring to this team.

“At this point it is very important to play games together, that he adapts to us, we adapt to him and he feels more and more connected with the team.

“Despite all the individuals we have in the squad, this team only works if we work together as a team.”

West Ham’s Aaron Cresswell gave fellow defenders a warning of what they can expect from the former Borussia Dortmund ace this season.

The full-back, 32, said: “It is the first time I have played against him. He is so powerful and direct.

“It’s obviously disappointing from our part but we were up against a fantastic team. The conditions were really hard for us, certainly when they kept the ball.

“They had a lot of possession and you feel like you are constantly chasing. We were up against a really good team but we were still disappointed with our display.”