THE dream of a clean sweep  lives on… but they’re going to have to brush up a bit if it is to become a reality.

For nearly 84 minutes Manchester City huffed and puffed without every really coming close to blowing the Everton house down. 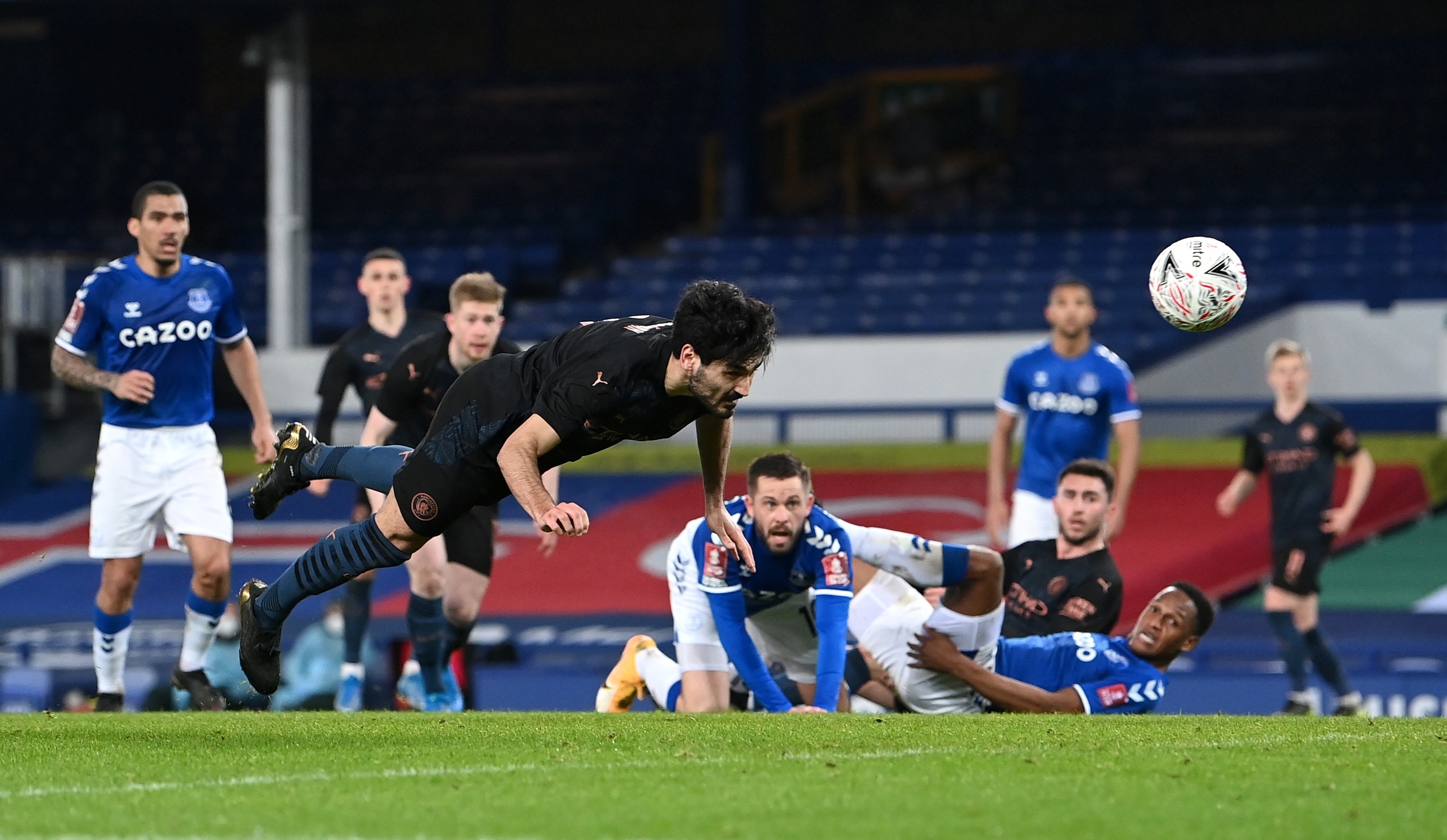 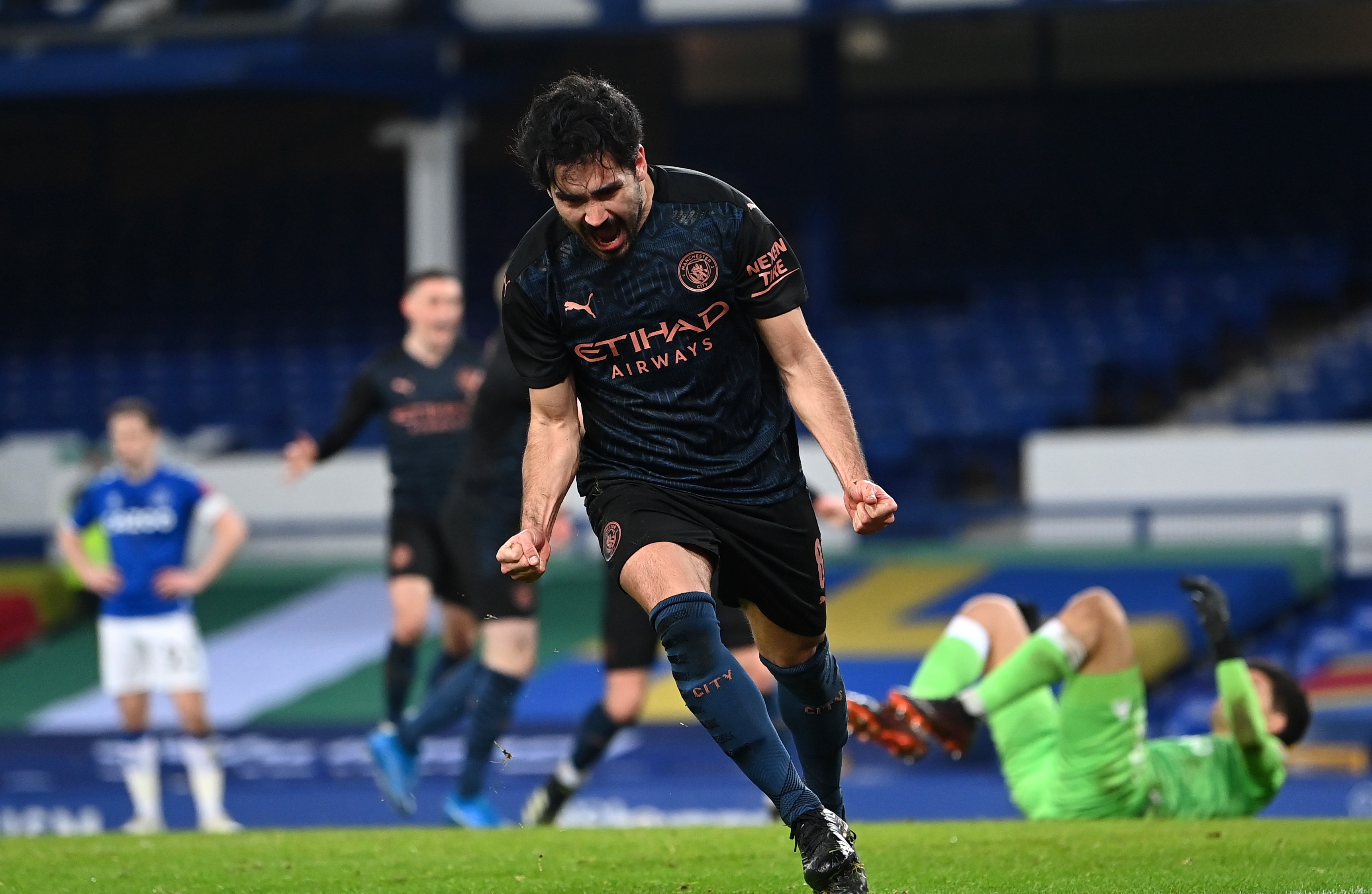 The German international has now scored 16 goals in all competitions this seasonCredit: Getty

Yet then centre back Aymeric Laporte made another striding raid from halfway which ended with stand-in keeper Joao Virginia somehow tipping his shot onto the crossbar.

And there – heartbreakingly for the Toffees, happily for City – was Ilkay Gundogan to throw himself and nod a diving header into an empty net.

Not exactly out of jail…near total possession and few hairy moments of their own at the back was proof of that.

But certainly far more of a toil than a trot, and Pep Guardiola knows there is much work to be done if awesome foursome of seeing all the major trophies at the Etihad isn’t going to indeed prove as impossible as he claims.

Forget Kevin De Bruyne’s last minute second. By then Everton had to chuck men forward to try and save it.

Yet for all bar those closing minutes, City were dominant without being dazzling. And on another day, against better opponents, they would have lost this, make no mistake.

All that against a side with a third-choice keeper in goal because of injuries to Jordan Pickford and Robin Olsen, for all young Virginia did impressively well – on the few occasions he had to.

Everton chief Carlo Ancelotti had insisted in his programme notes at least last night were certainly bullish, insisting he had a strategy which made him confident of victory. 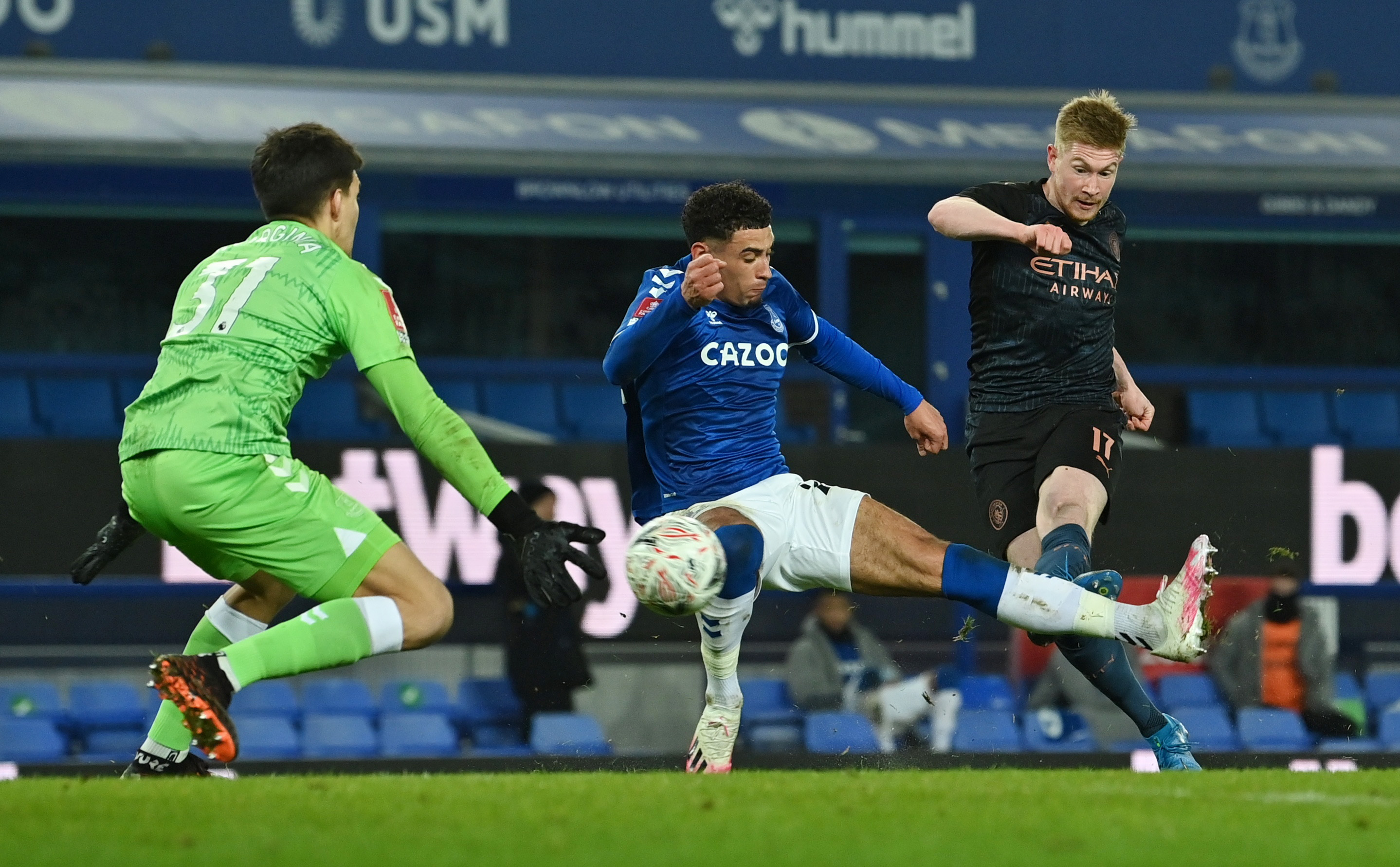 Maybe it was based on the hope City would eventually get so bored a having the ball, of playing almost entirely in the Everton half, that they’d get bored.

It certainly didn’t involve pushing too far upfield, and if the home defence had been any deeper, they’d have ended up watching from the Gwladys Street stand.

Just about the only respite they got was a break after Fernandinho clipped Richarlison, who collapsed as embarrassingly as a Tottenham European campaign.

There is no doubting the Brazilian striker’s talent, but his pain threshold? Let’s just say he wouldn’t make your top 100. A world away from team-mate and fellow countryman Allan. 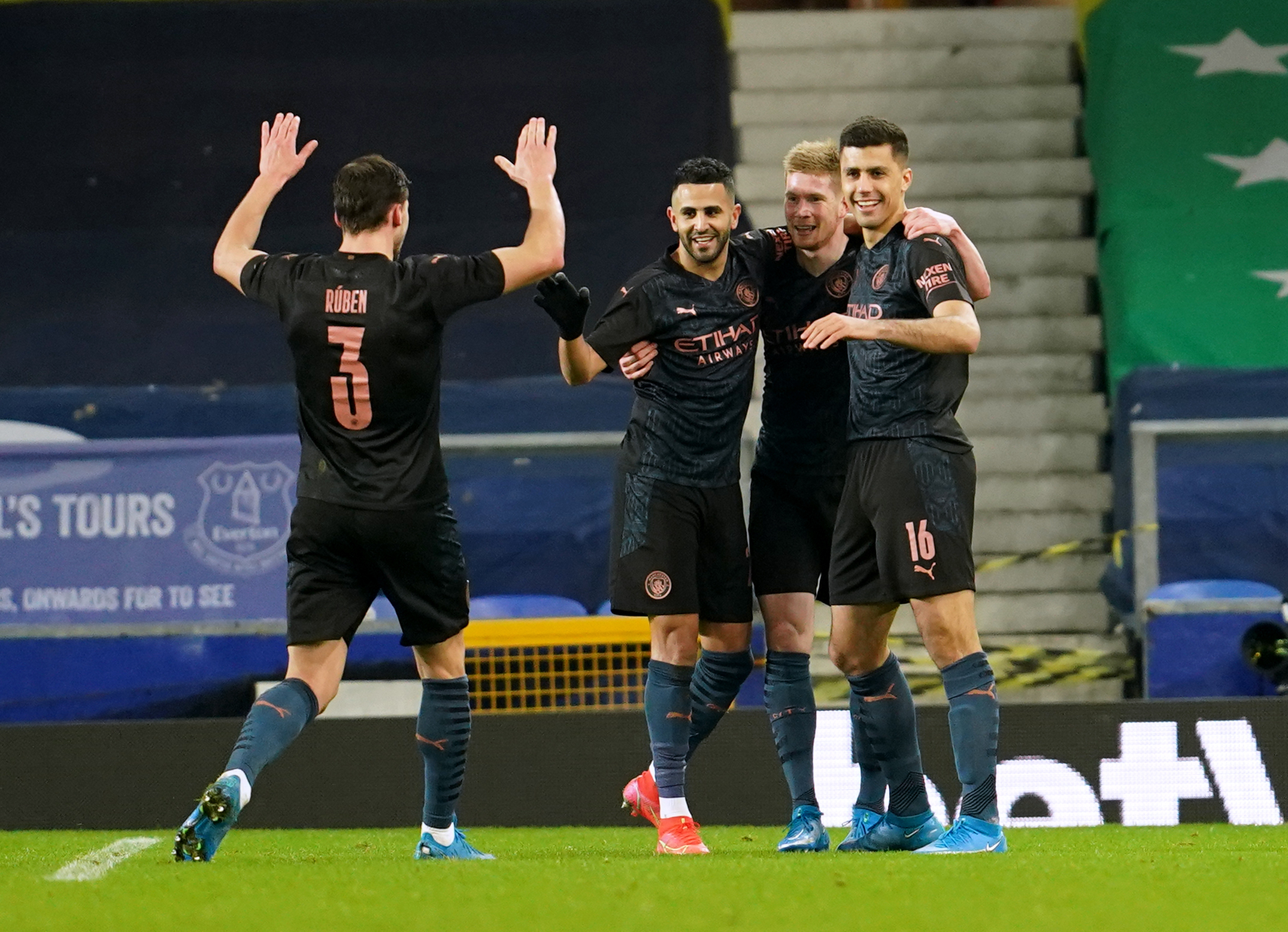 De Bruyne gets the congrats after his stoppage time strikeCredit: PA

With him snapping and snarling around the midfield like a starving street dog – Ilkay Gundogan felt the effects of that more than anyone – City could never totally relax.

And if there is one accusation to level at Guardiola’s teams, it is that at times they do tend to over-play.

Certainly Virginia would have expected to be busier than merely fielding a couple of long-range sighters, as City pinged it around, but hardly over-worked the stand-in stopper.

Indeed, the closest thing to a breakthrough came when Yerry Mina rose to meet Lucas Digne’s corner, and Alex Zinchenko headed off the line.

Whether it would have sneaked into the far corner is debatable, but it certainly had defensive hearts fluttering. Yerry and the pacemakers, you could say.

It was a warning, too, that possession alone – and City had nearly three quarters of it – really means FA.

Not without an end product. And the clean sweep-seekers were taking their time in finding one.

And the longer Everton hung in there, the longer it stayed all square, well the more City’s frustration grew…while the home side’s belief slowly and steadily did likewise.

It would have been through the roof had Richarlison’s snapshot been a yard to the right when he pounced onto a second ball as Mina caused havoc at a set piece. 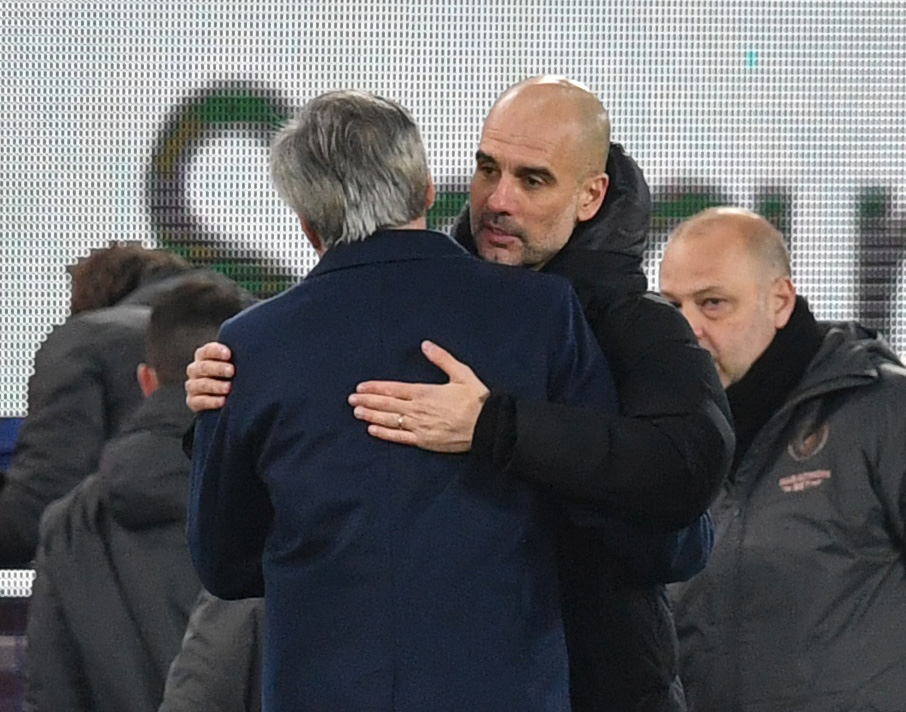 Pep Guardiola embraces his opposite number Carlo Ancelotti at the final whilstleCredit: Reuters

But if anything that just tweaked the tiger’s tail. At least, that’s the impression City gave, the way they reacted to the effrontery of a shot on their goal.

The loping Fernandinho made the unlikeliest of charges to the left flank, and when he pulled it back, Raheem Sterling met it with his side-foot.

Admittedly it wasn’t the cleanest of strikes, hitting it into the surface first, yet it still needed a superb save from Virginia. Not so much with fingertips, more fingernails, it was that close.

Guardiola was running out of patience, too, chucking on Riyad Mahrez, their star of recent weeks, and then Kevin De Bruyne to try and crack the solid blue wall.

The message from the bench couldn’t have been clearer…Get.This.Done. And in normal time too, preferably.

Easier said than done, mind. For while Everton were never dazzling, they were dogged, determined and a textbook example of well drilled.

It took a marauding run from Laporte, an exchange with De Bruyne and a shot that Virginia tipped on to the bar – only for Gundogan to throw himself and head in – to finally find a way.

And then, with Everton broken at last, Rodri sent De Bruyne scooting away and he finished emphatically.

At least it ensured the International Day of Happiness ended with a smile for Guardiola…but it will have been a wry one, you can be sure of that.