MANCHESTER UNITED fans sang non-stop about Cristiano Ronaldo and passed a life size cardboard cut-out of the legend between them.

You can understand the excitement as he heads back to Old Trafford. 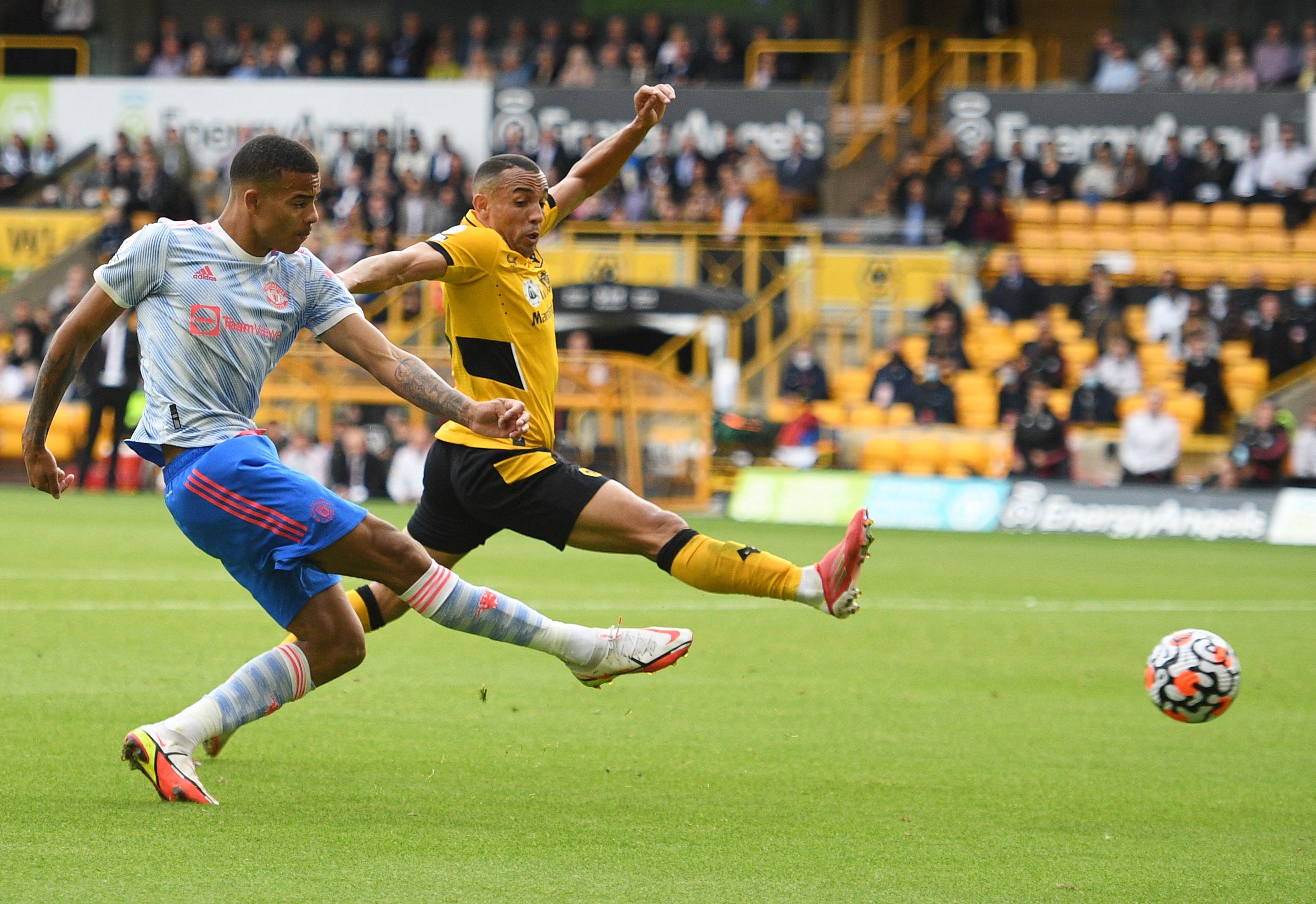 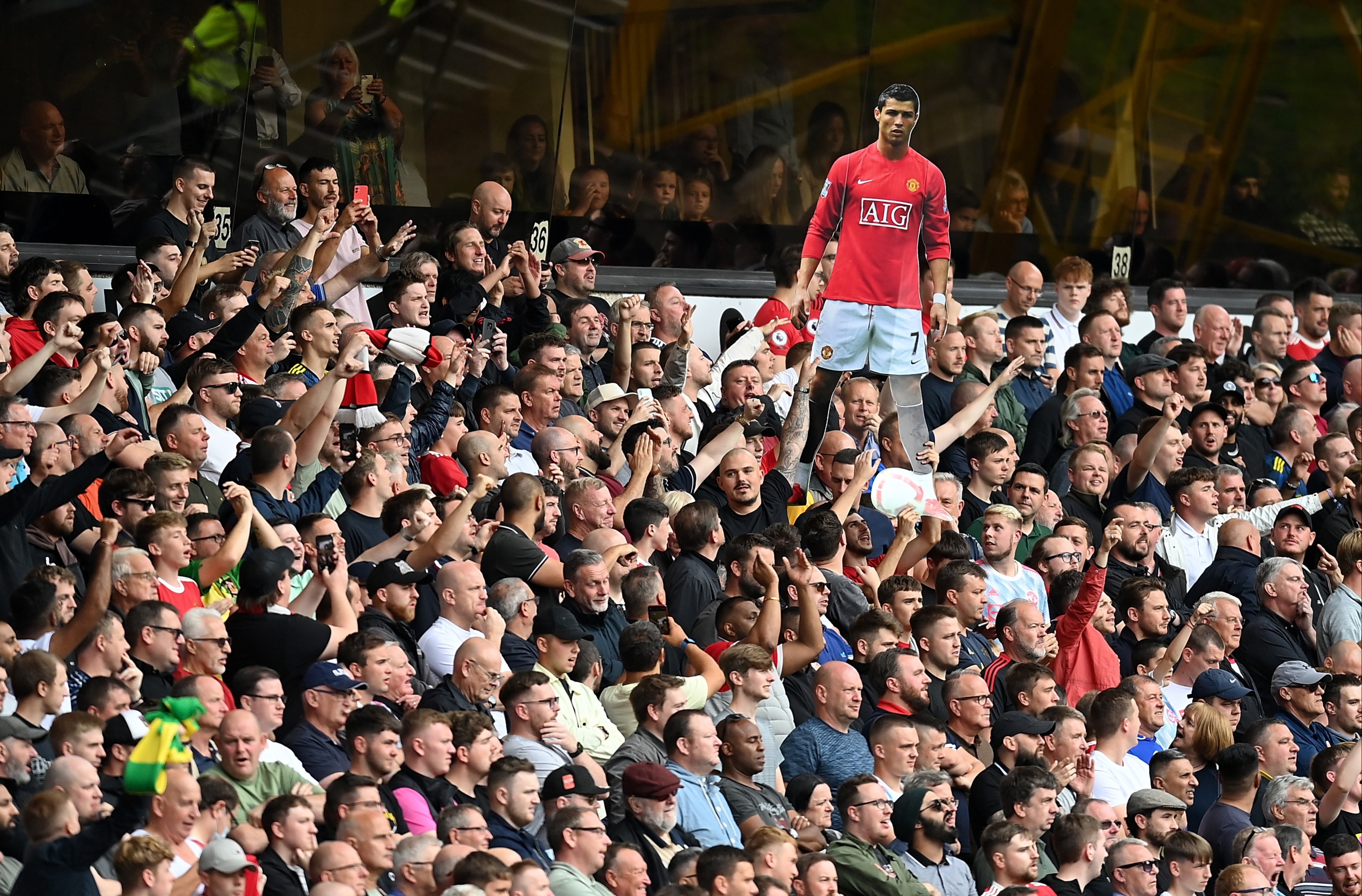 Manchester United fans had a cardboard cutout of Cristiano Ronaldo in the crowd at MolineuxCredit: Getty

But if they may just get the final couple of years of his incredible career they can look forward to another ten or more from Mason Greenwood.

The chance of him following Ronaldo into the pantheon of all time United greats is very real – yes he is that good.

After a lull last season Greenwood is back and has now scored in each of United’s opening three league games as they have taken seven points from nine.

His strike on 78 minutes came after the visitors had withstood so much pressure and had David De Gea to thank for keeping them in it with an incredible double save from point blank range.

But this what United do when they are not at their best, they hold on, they don’t give in and then they pounce.

The result means they are now 28 unbeaten away from home in the Premier League surpassing Arsenal’s Invincibles record.

Once again Wolves will be wondering how they have ended up 1-0 losers as they were in both previous two league games to Tottenham and Leicester.

It was a thrilling end to end first half they really deserved the half-time.

The problem was that as with their opening game of the season at home to Spurs their attacking play was lacking the end product. 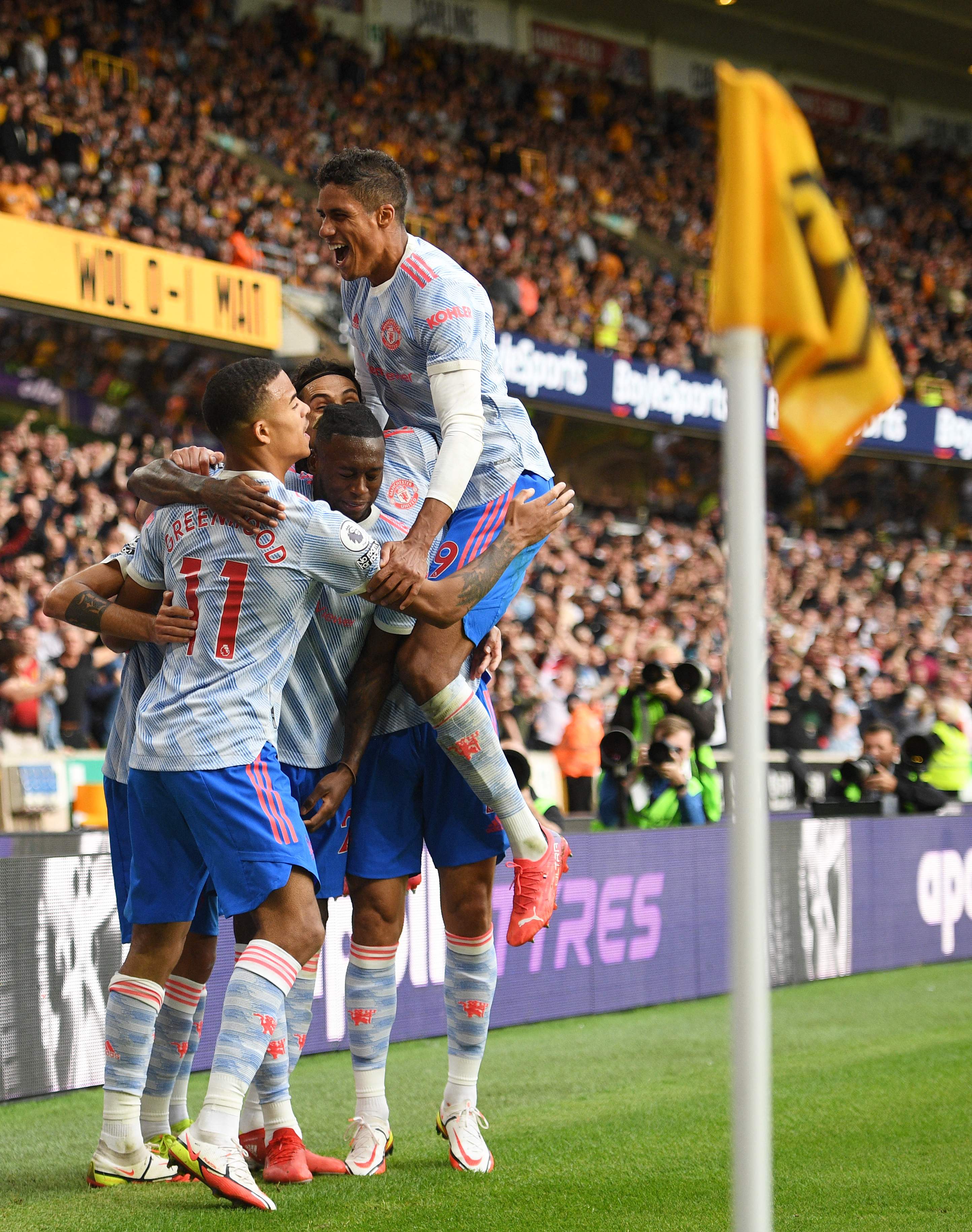 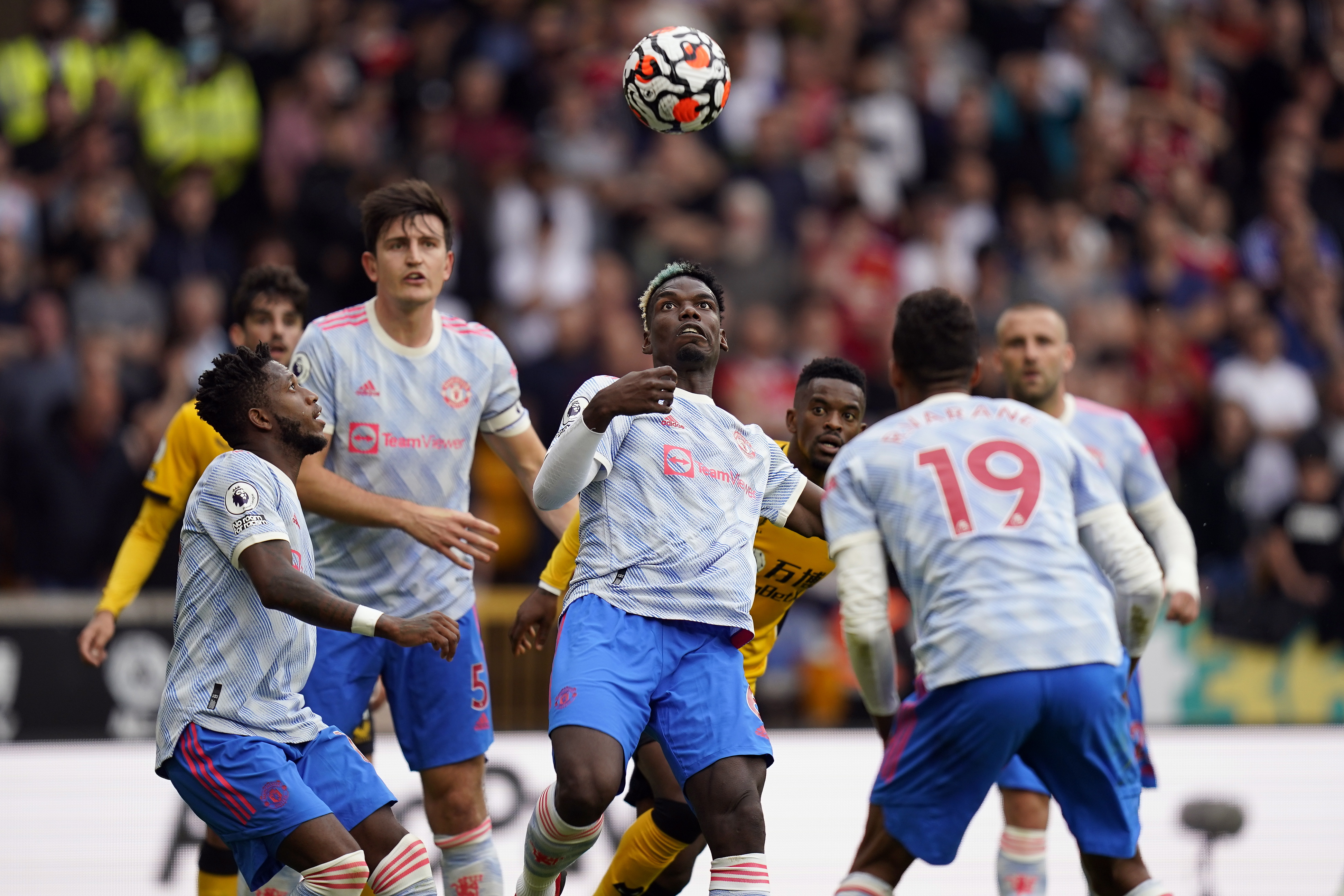 Paul Pogba and Harry Maguire keep their focus as United came through another tough away test in controversial styleCredit: EPA

Bruno Lage has been brought in to give a more thrilling style of play than Nuno Espirito Santo with fans now back at Molineux.

It is certainly that, particularly on the break with Francisco Trincao and Adama Traore.

Indeed it was Trincao who thought he had given his side the lead after just six minutes.

From a United corner Wolves broke with Ruben Neves attempting a quick through ball.

Fred intercepted but only managed to deflect the ball into the path of of Trincao.

He was away, his cross shot had De Gea beat but Aaron Wan Bissaka had sprinted back, stretched out a leg and somehow stopped the ball from crossing the line.

United were having one of those first halves that fans will remember on occasions from last season. 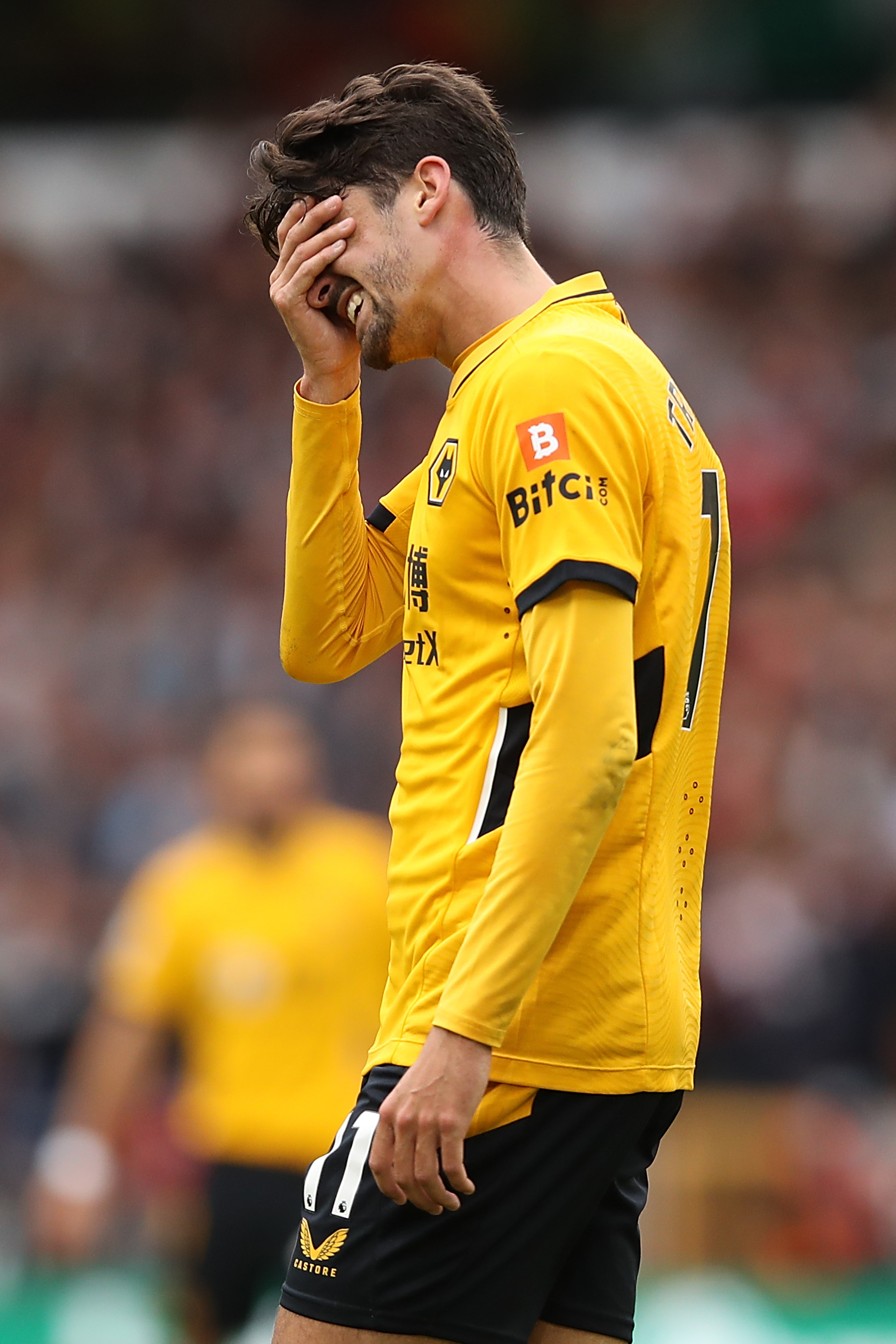 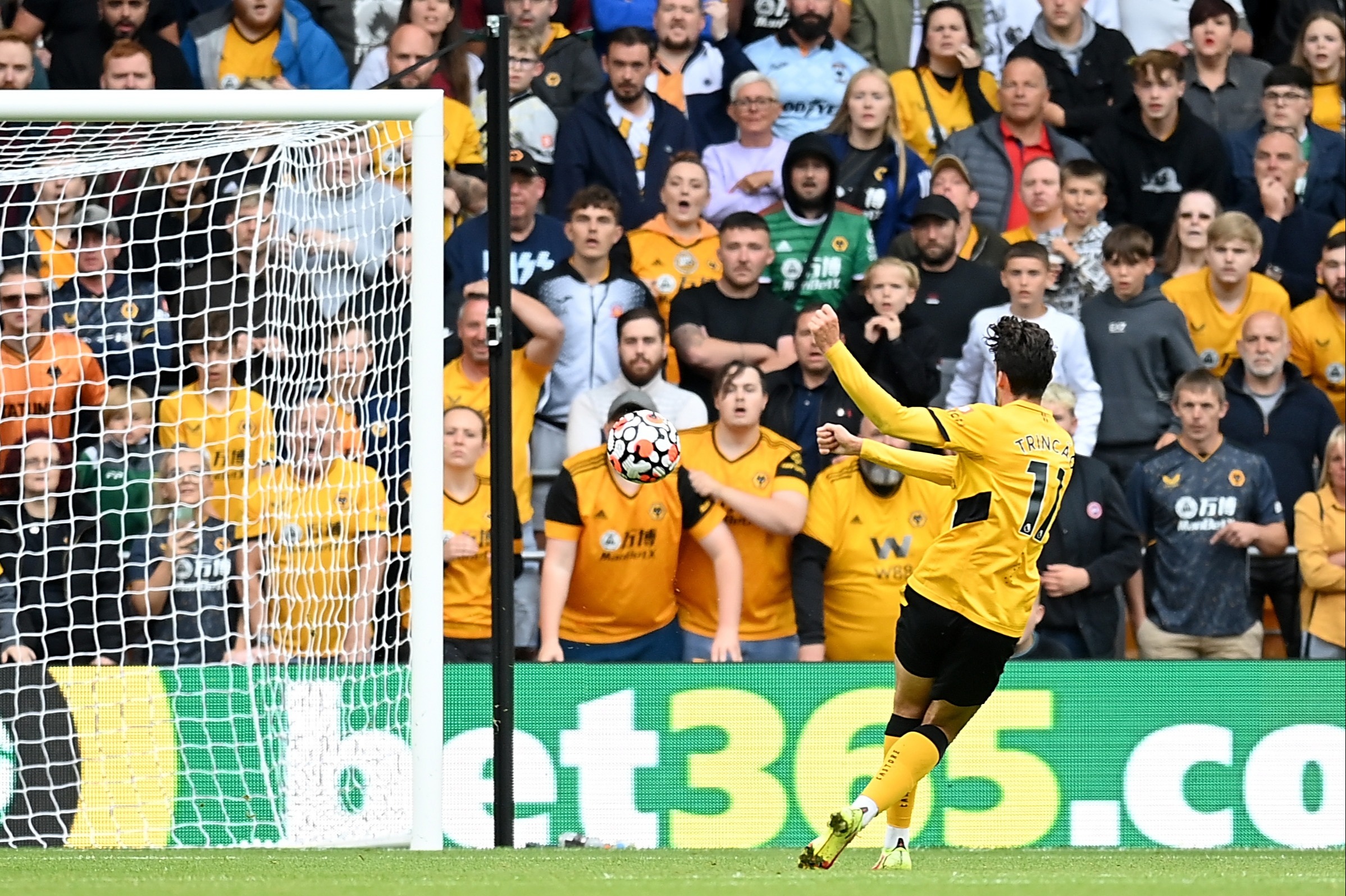 Francisco Trincao goes close for Wolves when they put on the pressureCredit: Getty

Bruno Fernandes was moaning and groaning and eventually talked his way into Mike Dean’s book.

He did have the ball in the back of the net on 38 minutes but was clearly offside when Paul Pogba put him through.

As the first half came to a close, however, Mason Greenwood provided one of those moments that you see in a blur as he switched the ball from one foot to the other, shot across the goalkeeper and just the wrong side of the far post.

Raphael Varane was making his full debut alongside Harry Maguire and while there was plenty of attacking intent from wolves they were not allowing them clear cut chances.

At the other Jadon Sancho making his first start was poor.

He was playing in the wide left position of a three behind Greenwood where Pogba has prospered against Leeds providing four assists.

But to accommodate the £73million winger he was back in a deeper role and looking like the old Pogba again, giving the ball away and looking a bit frustrated.

A change was needed and it came when Edinson Cavani came on for Daniel James in the 53rd minute.

United could not get the ball to the veteran Uruguayan striker to take advantage of his poaching instincts.

Before the game manager Ole Solskjaer had claimed he still has the best goalkeeper in the world in David De Gea.

After his 69th minute double save it was hard to disagree.

Joao Moutinho swung over a corner and while Romain Saiss downward header from inside the six yard box might have been straight at the United ‘keeper his follow up was not.

He followed up and from two yards out planted a shot to the left of De Gea.

KNOCKOUT PUNCH FROM THE ROPES

His reactions to keep that out defied belief and gave United some leading to Greenwood’s goal.

Wolves argued that Pogba had fouled Neves in the build-up as they contested a ball replays suggested otherwise and the VAR agreed.

The ball broke out to Varane who cooly laid it out wide for Greenwood to cut inside and fire a shot that slipped under the outstrectched hand of Jose Sa and in.

How often does this happen.

United on the ropes and then they respond with the knockout punch.

The Guardian view on attacks on NHS staff: a grim and growing problem | Editorial