CRYSTAL PALACE fans ripped into ‘salty’ Frank Lampard after his Everton side were thrashed by the Eagles.

The Toffees were demolished yesterday at Selhurst Park as Patrick Vieira’s team booked a place at Wembley in the FA Cup semi final.

Goals from Marc Guehi and Jean-Philippe Mateta gave them a two-goal advantage at the break.

And then Wilfried Zaha and Will Hughes secured the resounding 4-0 win after half time.

A clip of the Everton manager’s post-match interview has now gone viral on social media amongst Palace supporters.

Lampard says: “It’s the quarter final of a cup and we started really well. 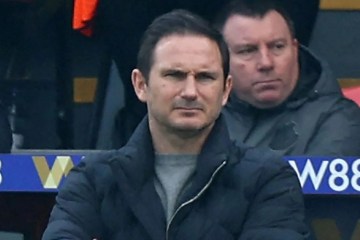 And his comments have caused a fierce backlash from the Palace faithful.

One Palace fan tweeted: “And some of our fans wanted Salty Frank Lampard!”

While another said: “Why’s Lampard so f***ing salty. Get over it, we battered you and you were s***!”

As a fellow Eagle commented: “Wipe your eyes.”

In the full interview, Lampard did lay into his flops by saying: “There is only so much you can keep trying to butter someone up to get confidence.

“You’re playing at the cut-throat end of football; this is the FA Cup quarter-finals. If you haven’t got the confidence to play, you can flip it and say: ‘Have you got the b***ocks to play?’ Apologies but that’s the football term.

But any hopes of some much-needed cheer in the FA Cup were extinguished on Sunday.

The Blues last reached the semi-final of the competition in 2016 and have not won a major trophy since their victory in the final in 1995.