“I HAVE to change the way West Ham play”, said boss David Moyes determinedly ahead of the season.

And so the Scotsman signed off on £163million worth of summer transfers to help, acquiring the likes of Brazil’s starting No10 in Lucas Paqueta, and Italy’s up-and-coming No9 Gianluca Scamacca. 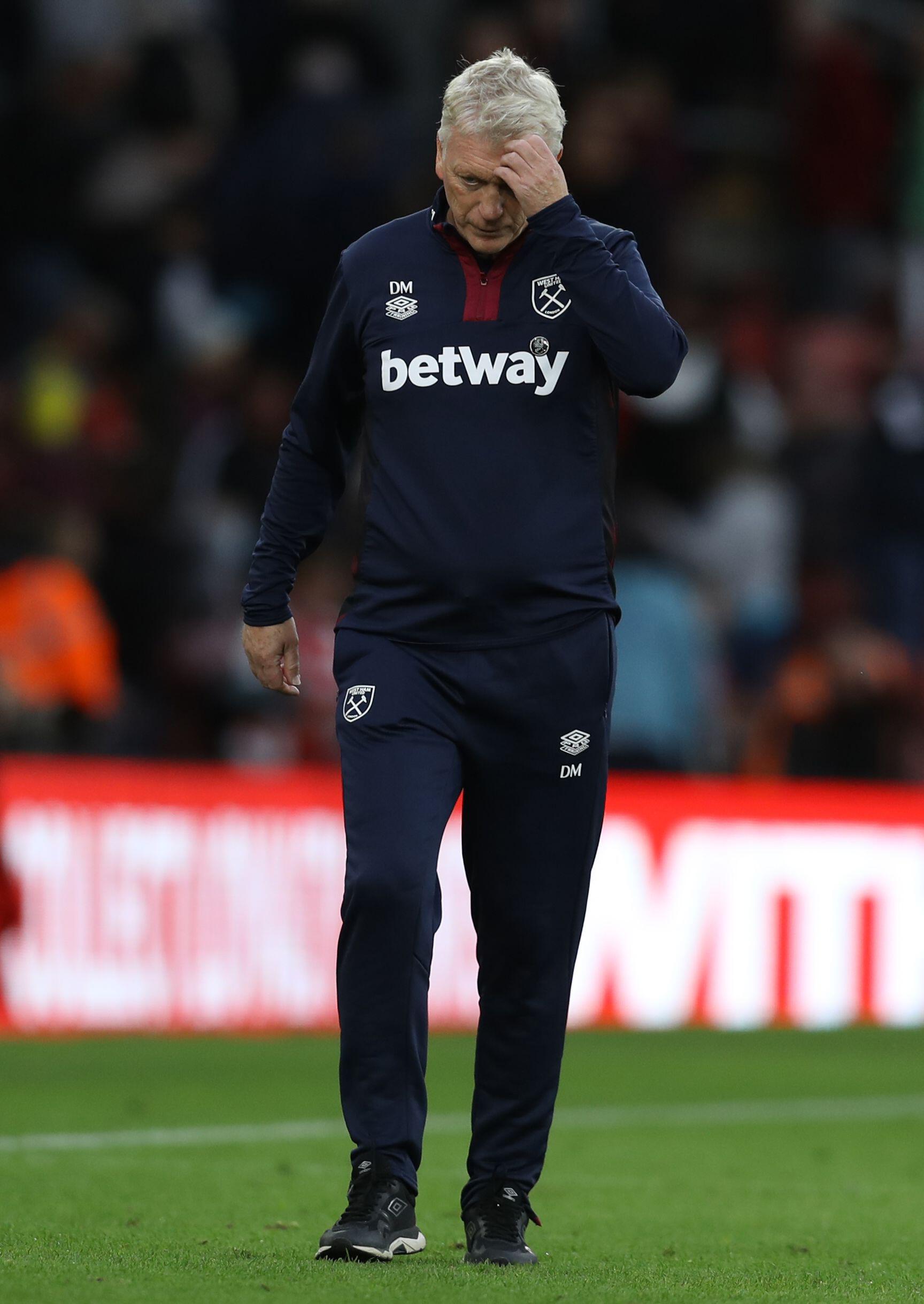 Moyes talked of changing the way West Ham play in the summerCredit: Alamy

Other established international footballers were also brought to East London.

One signing, however, flew under the radar in the Premier League, but the mystery surrounding the player made West Ham fans excited nonetheless: Flynn Downes. 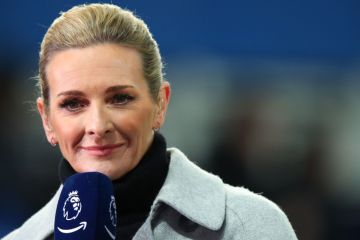 The 23-year-old lifelong Hammer was snatched from under the noses of London rivals Crystal Palace at the last minute with West Ham paying Championship club Swansea £12m for the midfielder.

West Ham had longed for an additional body in the middle of the park to help out Hammers captain Declan Rice and Czech Tomas Soucek, who had run themselves into the ground since Moyes‘ December 2019 return to the club, as well as replace the retired Mark Noble.

Despite showing promising signs in pre-season, Downes had to wait for his chance to impress in a competitive game.

It meant watching on as Moyes stuck with the old guard and fall to four defeats in their opening six Prem games.

Downes was also made to wait in West Ham’s Europa Conference League campaign.

He played a grand total of 29 minutes in the qualifiers against Viborg before he was handed his first start against FCSB in the Conference League group stages.

They say, “while you see the chance take it”. And take it he did.

Downes buzzed across the pitch at the London Stadium, effortlessly breaking up play while also showcasing his impressive passing ability – something Swansea fans hailed as some of his best attributes.

But he was mercilessly dropped for the next group game against Silkeborg. Tough love? Perhaps.

He then sat out three Prem games before returning to the midfield in West Ham’s third group game against Anderlecht in Belgium where he turned in another Man of the Match performance.

After the 1-0 win, Moyes hailed: “He played really, really well.

“He’s starting to show us a little bit more. He started a little bit slowly, but he’s really put a marker down tonight.

Public praise from the gaffer… Result.

But such a “marker” saw Downes only be handed an additional minute of Prem action in the Hammers’ next league game against Fulham to add to the 60 seconds he got on the opening day against Manchester City.

Anderlecht at home? No problem.

Downes did the business again last Thursday, reminding fans of a young Rice, despite being born just six days apart.

This weekend’s reward? A seat on the substitutes bench at Southampton as Moyes persisted with Soucek, hoping the once goal-scoring midfielder would play himself into form.

Soucek turned in another lacklustre performance, fluffing his lines for the Saints’ opener but was bailed out by the individual brilliance of midfielder partner Rice, who netted a worldie of an equaliser.

The Czech completed just 64 per cent of his passes at St Mary’s, which has become a recurring problem in the last year when West Ham are in possession, and compared to Rice, who consistently reaches the 90s, it’s not a pretty sight.

If he’s not scoring goals, Soucek struggles to make an impact in a game and his appearances are littered with misplaced passes and flat-footed touches, slowing play down.

It’s also important to note that Soucek’s role has changed with the evolution of Rice, with the England mainstay becoming more of a box-to-box midfielder rather than a holder, bringing his long-term future alongside the £150m midfielder into question.

And despite West Ham being on a five-game unbeaten run, it’s still not too late for Moyes to “change the way West Ham play”. 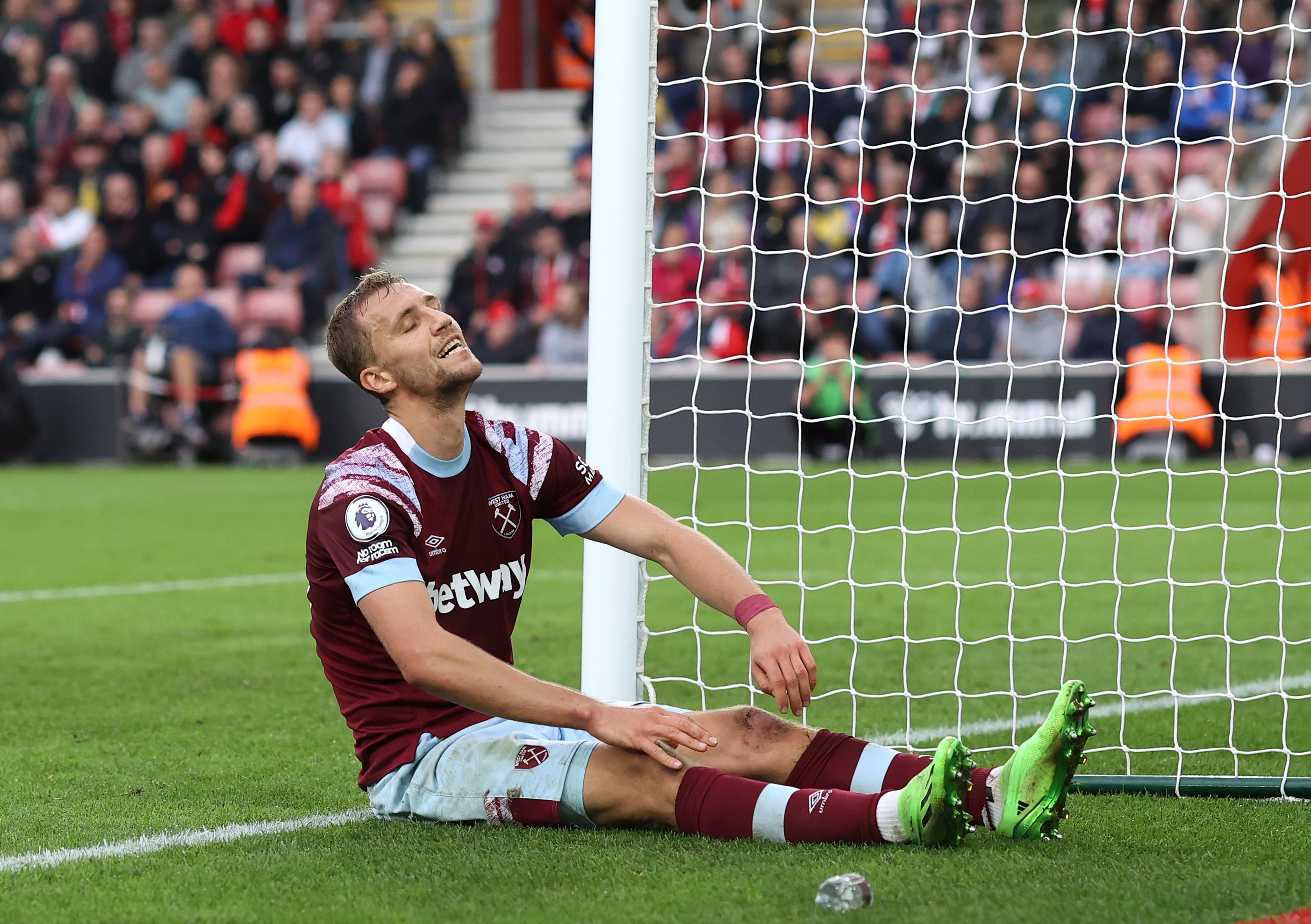 Soucek has proven to be a liability in possessionCredit: Getty

He completed an impressive 92.6 per cent of his passes attempted at Swansea last season.

Now Hammers team-mate Rice came in at second with 91.6.

Downes also played in a side with the highest average possession in their division at 63.8 per cent.

Downes also made 78 tackles and interceptions in the second tier, proving to be effective in recovering possession.

The No12 could be the ideal lynchpin in first phase build-up and he will help to keep the ball under pressure.

Downes playing behind Rice and Paqueta in a midfield three could prove to be one of the most dominating combinations in the division.

A midfield three of robust workers with a dash of Brazilian flair.

And with a bit more pace at the back, it could allow the Hammers to play a few yards higher up the pitch. 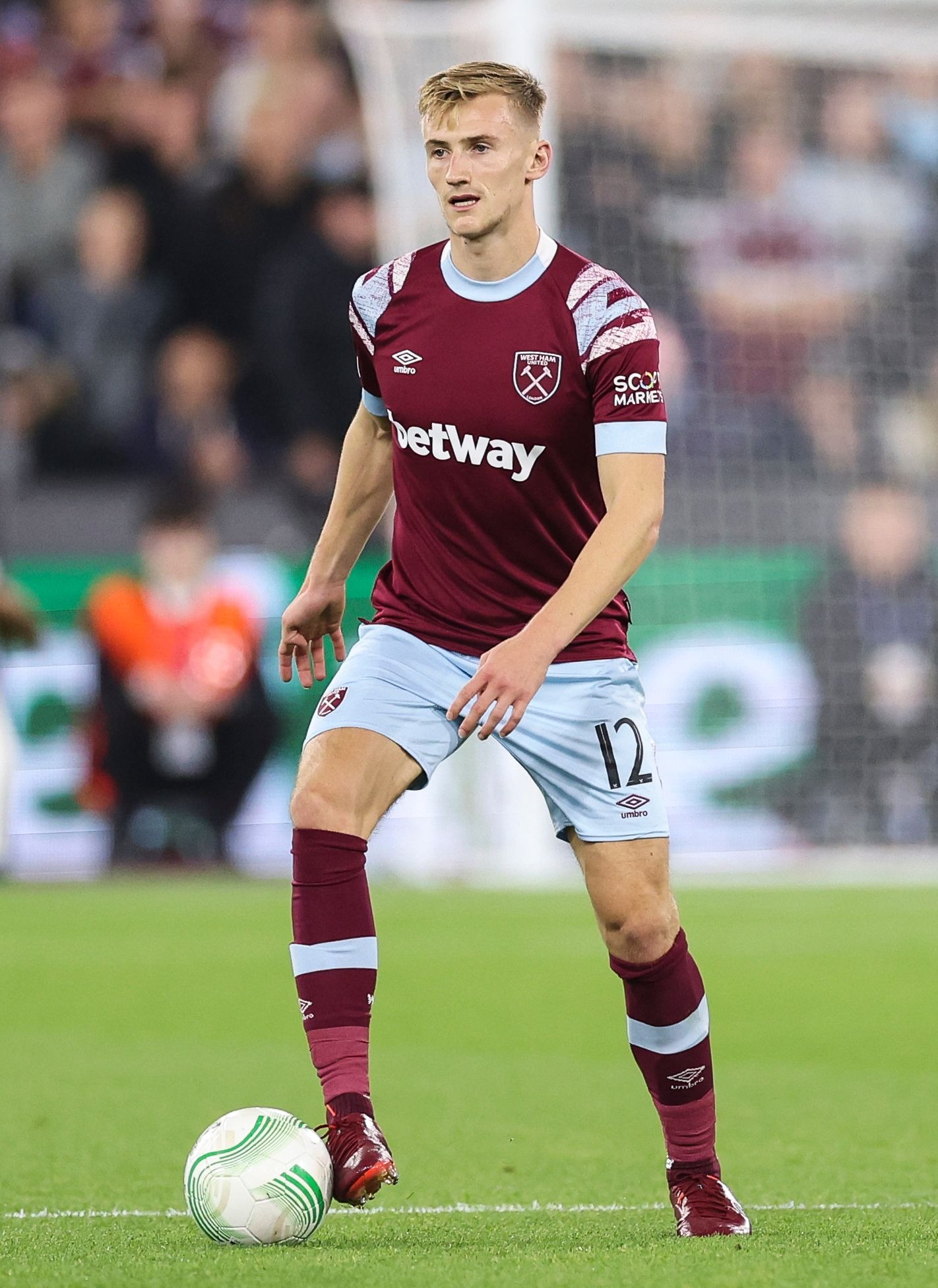 Downes was the most accurate passer across all four English divisions last seasonCredit: Rex 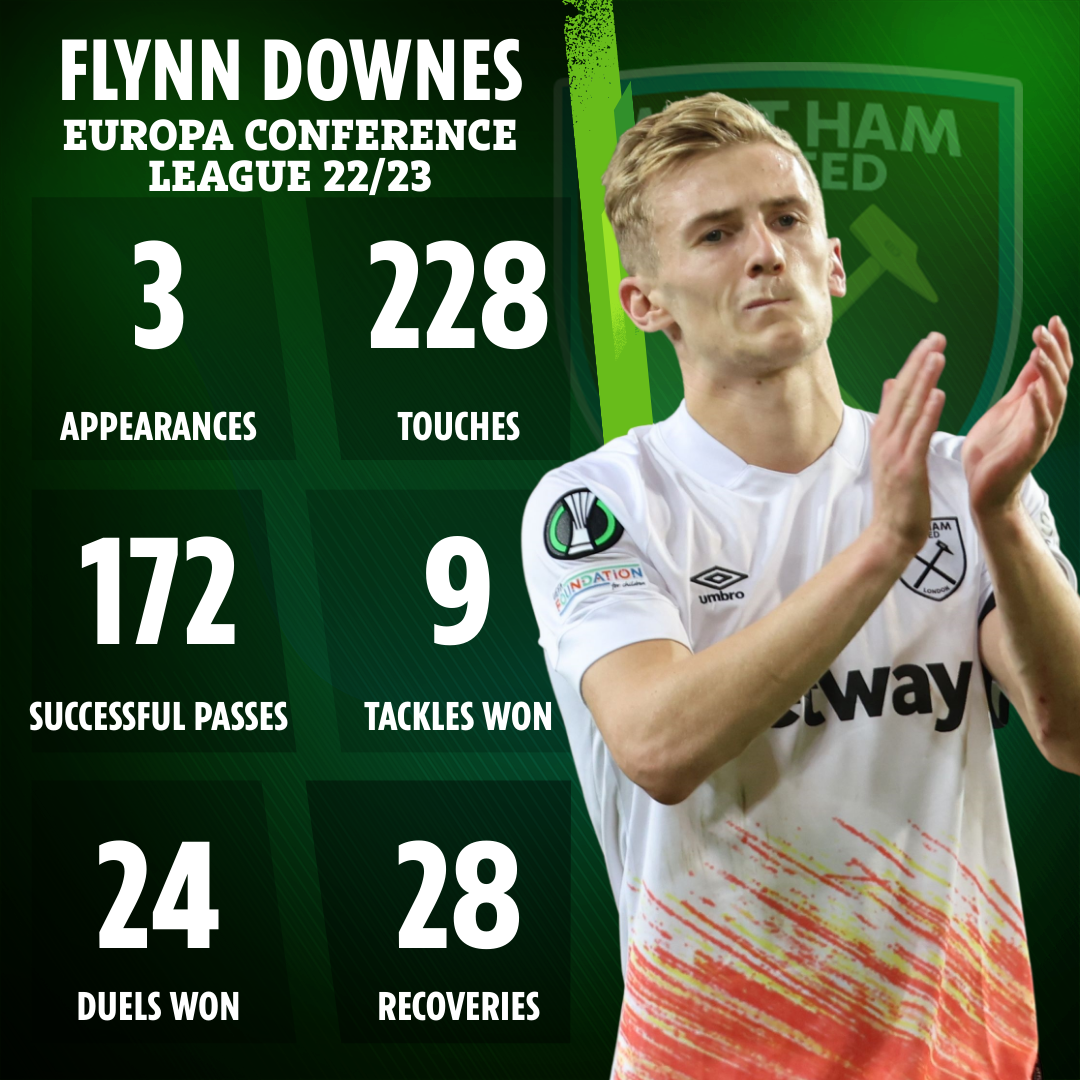 Downes’ stats in Europe are impressive

Regular watchers of West Ham would’ve known about Rice’s abilities both on and off the ball way before the rest of the football world started to cotton on.

The former Chelsea academy ace was even branded a centre-back playing in midfield by Gary Neville, which the Manchester United legend has now admitted was wrong.

A defensive rock with dancing feet and the power of a Lokomotive once up and running.

Rice can simply be unstoppable at times, and he’s key to switching defence into attack.

He is one of the best with carrying the ball at his feet and ranks high for successful dribbles as a midfielder.

Rice is also regarded as one of, if not THE best, strikers of the ball at West Ham.

His goals for the Hammers have shown that, including Sunday’s equaliser against Southampton.

Although, Scamacca might pip him to that title with the Italian able to rattle off a thunderous strike at any given time.

Rice checked his shoulder, played a one-two with Said Benrahma, ran into the space and fired a curling effort into the bottom right corner, sending the away end into pandemonium.

Funnily enough, he seems to be better at shooting from outside the box rather than the penalty spot.

Rice himself has admitted he needs to score more goals and by playing with Downes, it could free up some of his defensive responsibilities allowing him to focus more on the attacking aspects of his game.

Rice’s role from a holder is evolving and is pivotal to the Hammers’ build-up playCredit: Rex 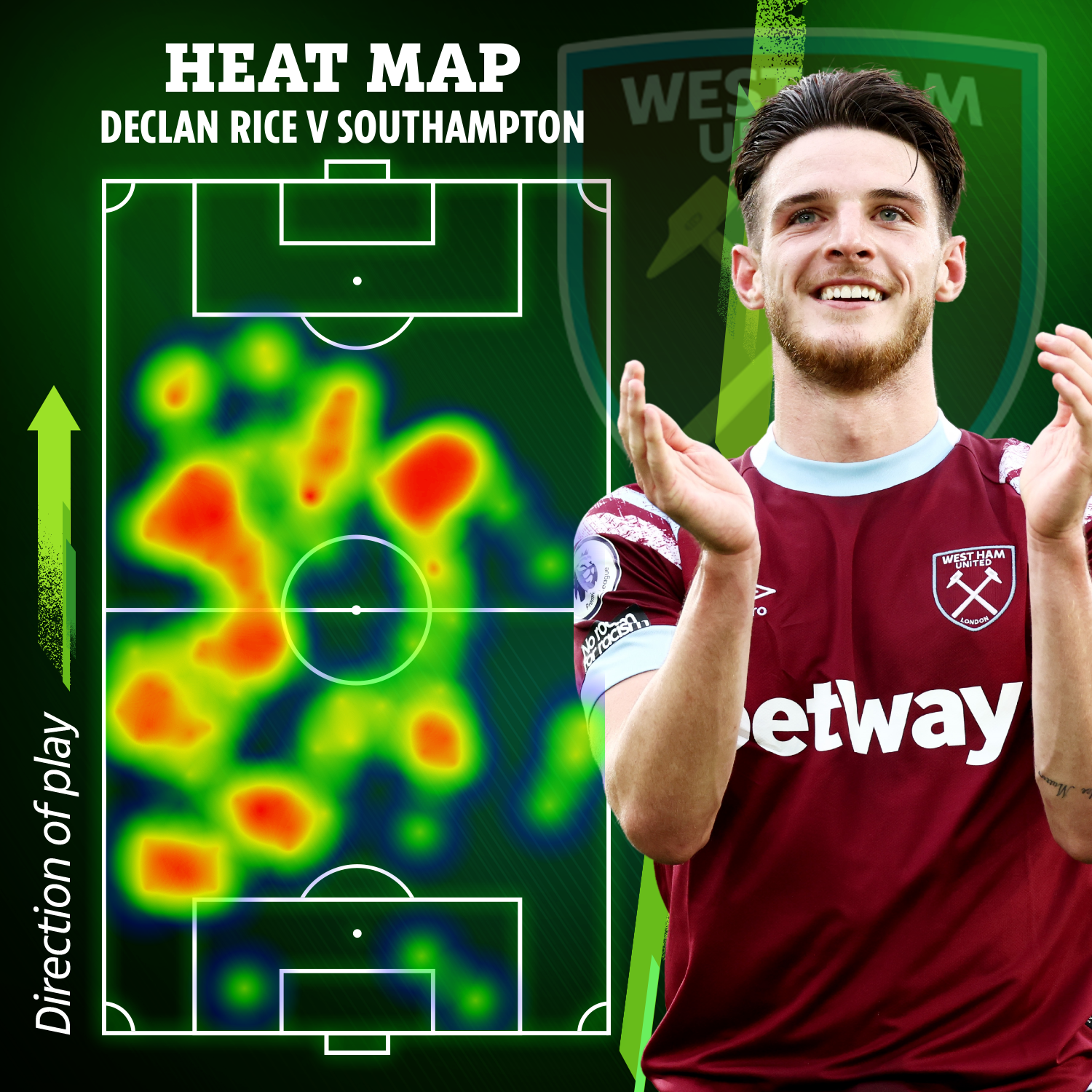 The Hammers splashed out £50m Paqueta in the summer, taking him off the hands of last season’s Europa League quarter-final opponents Lyon.

But he’s also able to do the dirty work, ranking among the top attacking midfielders with defensive actions last term.

Which is why Moyes was delighted to snap up Paqueta and throw him straight into the team.

But like Rice, Paqueta could also be a beneficiary of Downes’ inclusion.

Downes’ snappy approach and pin-point passing would get the ball to Paqueta quicker, helping the midfielder grow his influence in games.

Paqueta also appears to have a good understanding with fellow trickster Benrahma and Scamacca, assisting the Italian with both of his last two goals.

However, direct Benrahma is behind Pablo Fornals in the pecking order to start on the left flank.

He is also in competition with Cornet. 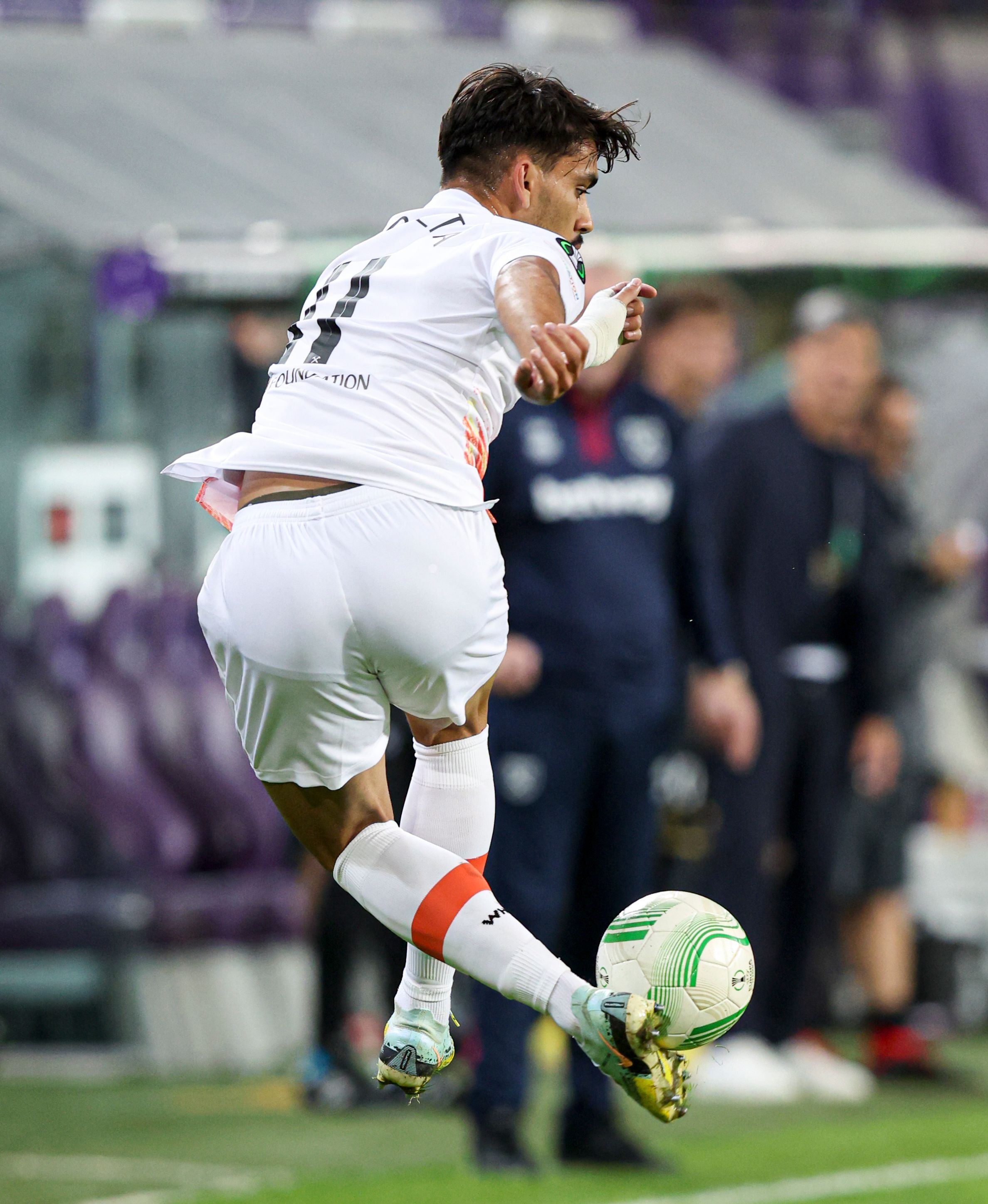 Moyes added a dash of Brazilian flair to his midfield cohortCredit: Rex 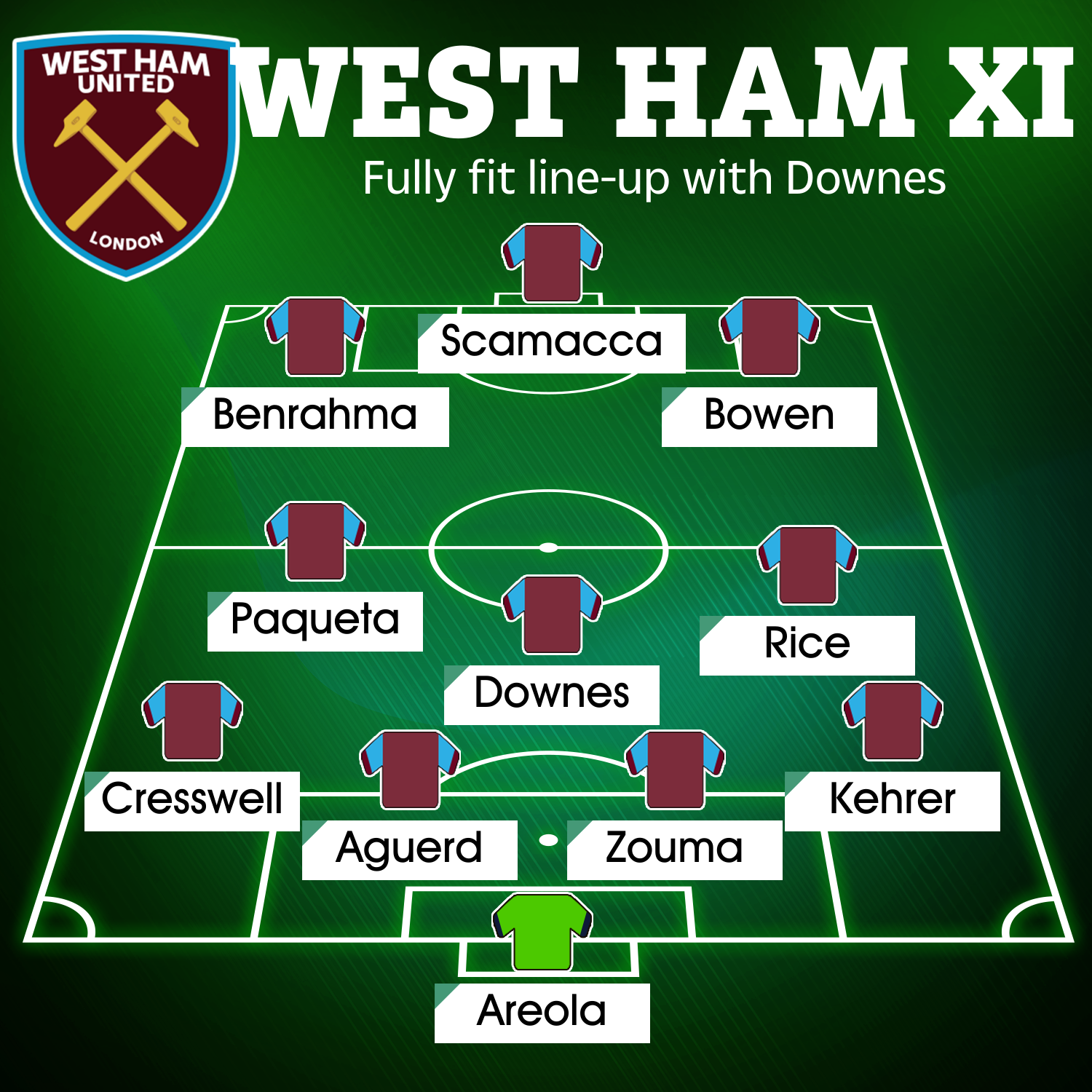 A midfield three of Downes, Rice and Paqueta would provide good support to the Hammers’ front three