LIVERPOOL had waited since March 2020 to celebrate victory in front of a full Anfield.

And the fans who had made the famous stadium ring with noise before kick-off only truly found their voice again after Sadio Mane’s superb goal made the game safe with just over 20 minutes to go.

In the end, Jurgen Klopp’s side were good value for the win.

But for the first half at least, Sean Dyche’s Burnley matched their hosts and scarcely deserved to trail to Diogo Jota’s goal.

In fact, they played better than they had in the late, smash-and-grab but historic triumph on the same ground back in January.

That result had ended Liverpool’s 68-game unbeaten home run in the Premier League and precipitated the collapse of their title defence.

Those inclined to be generous to Klopp and his team had given them two get-out-of-jail-free cards for last season. 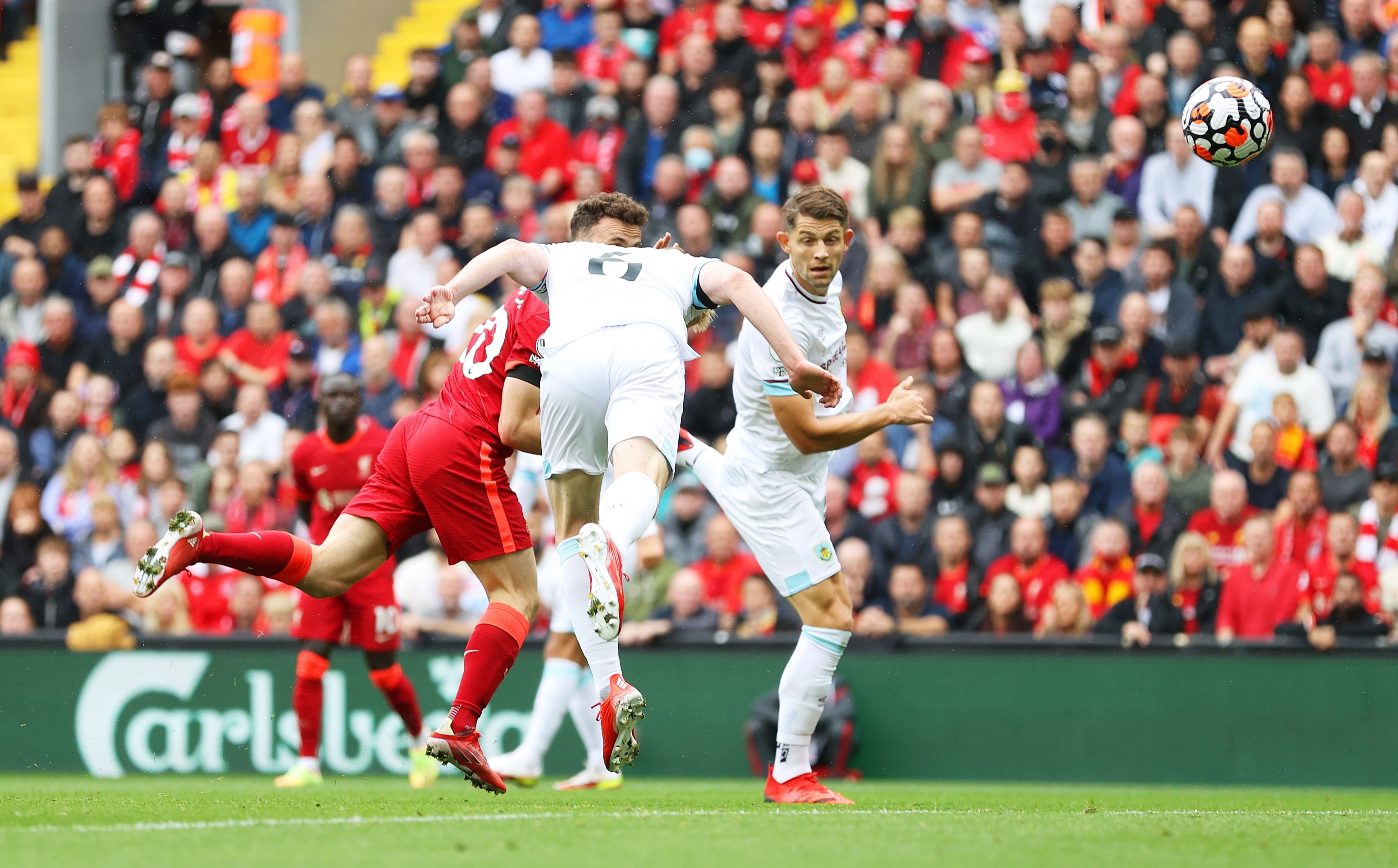 Diego Jota put Liverpool in the lead against BurnleyCredit: Getty

The first was their undeniable bad luck with injuries.

The second was the questionable assertion that Liverpool suffered more than any other team from playing without supporters.

Such a claim felt like not only an insult to other fans but also a Kop-out for Klopp’s players.

The effect of a full Anfield on home and away players alike is the stuff of folklore.

But the fall from grace of Klopp’s so-called “mentality giants” could not be explained away by that.

For this rematch, there could be no more excuses, with key men back fit to play in front of a capacity crowd 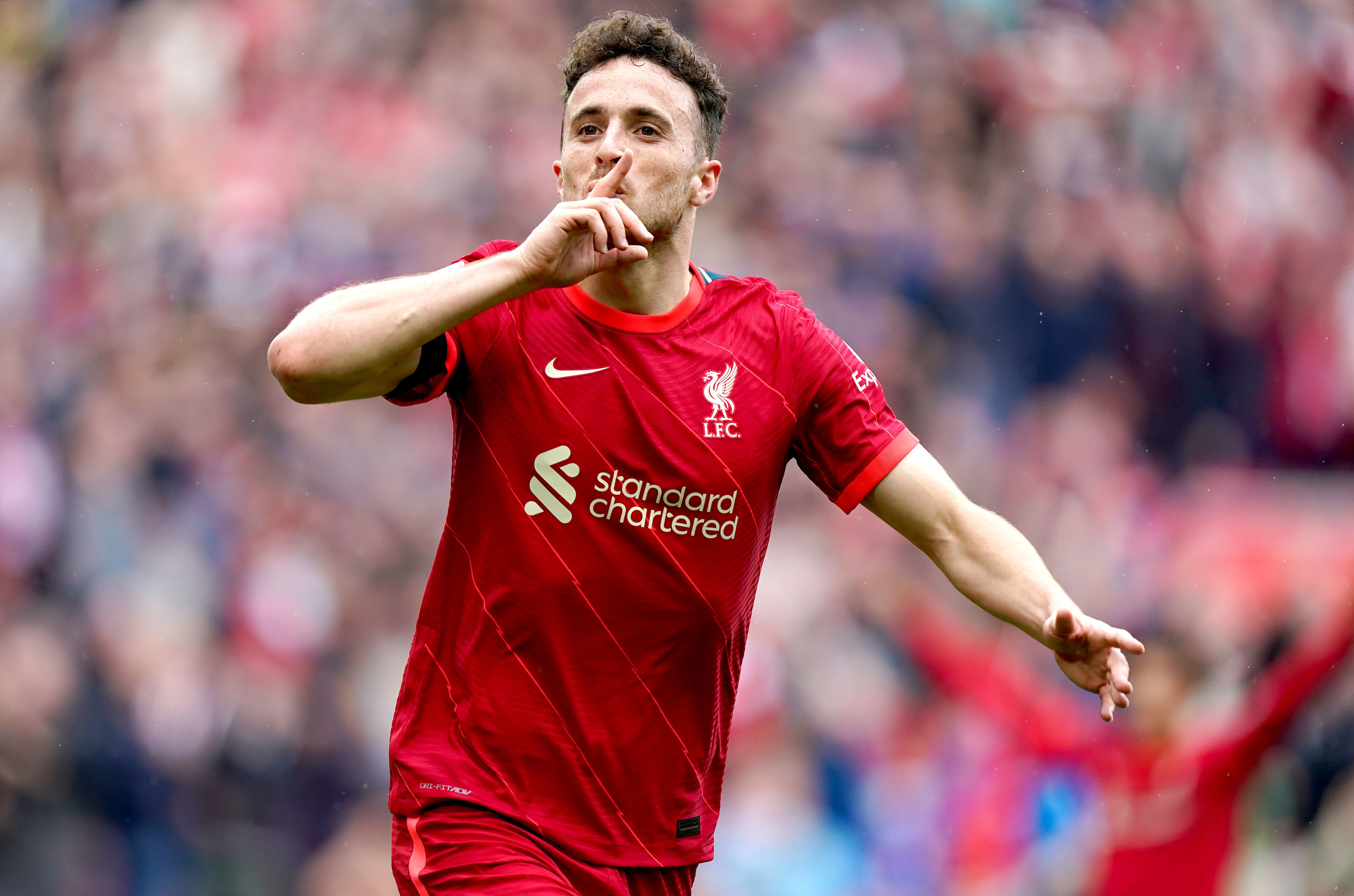 A comparison of the teamsheets suggested it would be a very different Liverpool and the same old Burnley.

Sean Dyche’s side showed only two changes from seven months earlier, and it would have been just one if Ashley Westwood had not been out injured.

Set out in a 4-4-f**king-two, with shirt numbers one to 11 – how much more Burnley could it have been? The answer is none: none more Burnley.

The return of a full Anfield, eager to turn the volume up to 11, was the not the only “first” of the day for the hosts.

Jordan Henderson had not played a competitive club game since limping off in the Merseyside derby on February 20. More significantly, perhaps, it was his first start in centre midfield since December 30. It was to be a quietly influential the

With Fabinho absent because of family bereavement, there was also a first Premier League start in Liverpool colours for Harvey Elliott. 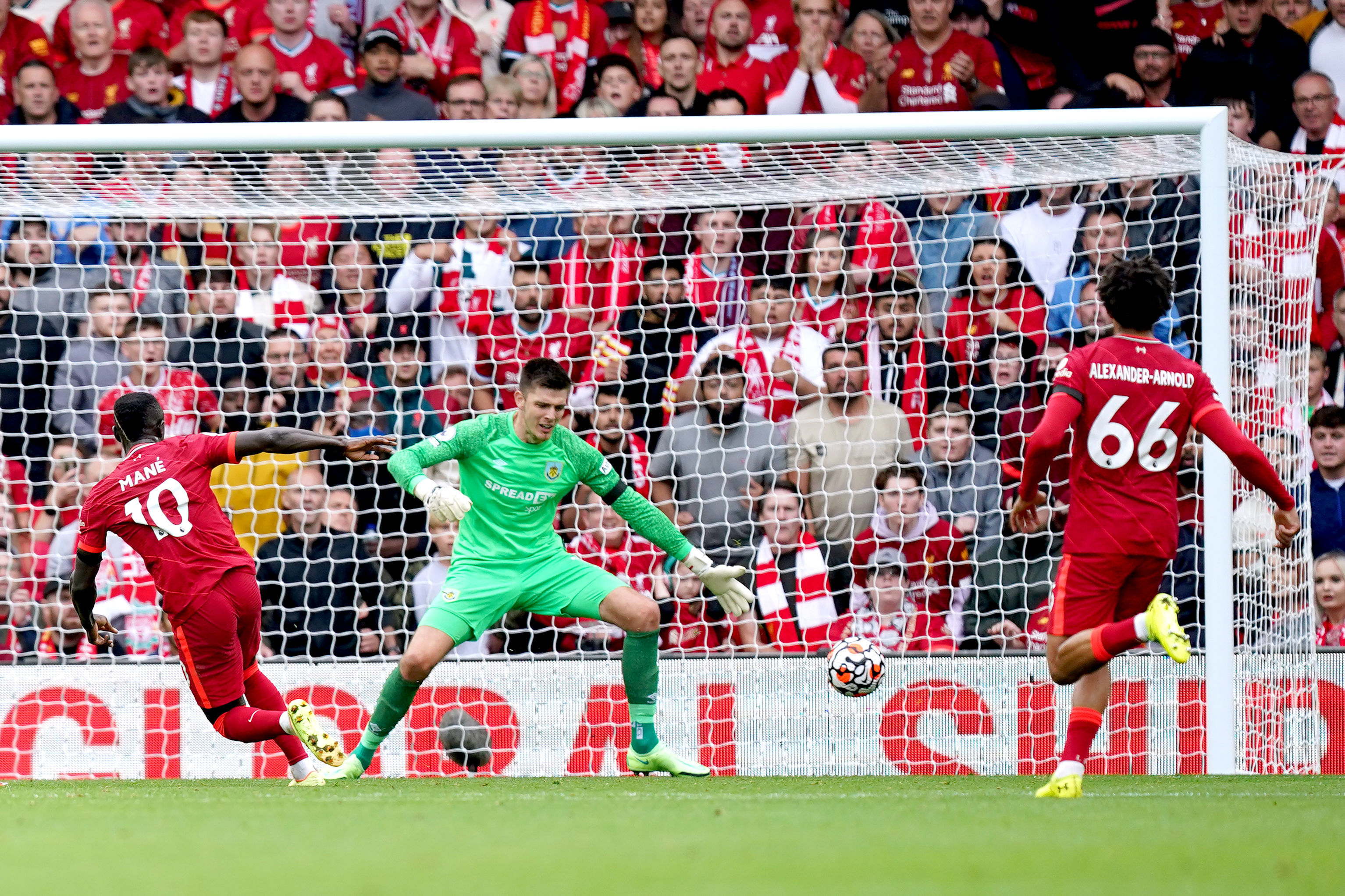 Dyche had every reason to be pleased with how his team began the game.

They gave the hosts little time on the ball, forcing Klopp’s side backwards and sideways and restricting their threat, such as it was, to set-pieces.

The result was that the pre-match and early-game fervour of the crowd diminished and something of the nervous Anfield atmosphere of last season seemed to return.

The visitors were also playing the better football in the final third and almost took the lead when Chris Wood met a fine Dwight McNeil cross with a header that Alisson palmed away. 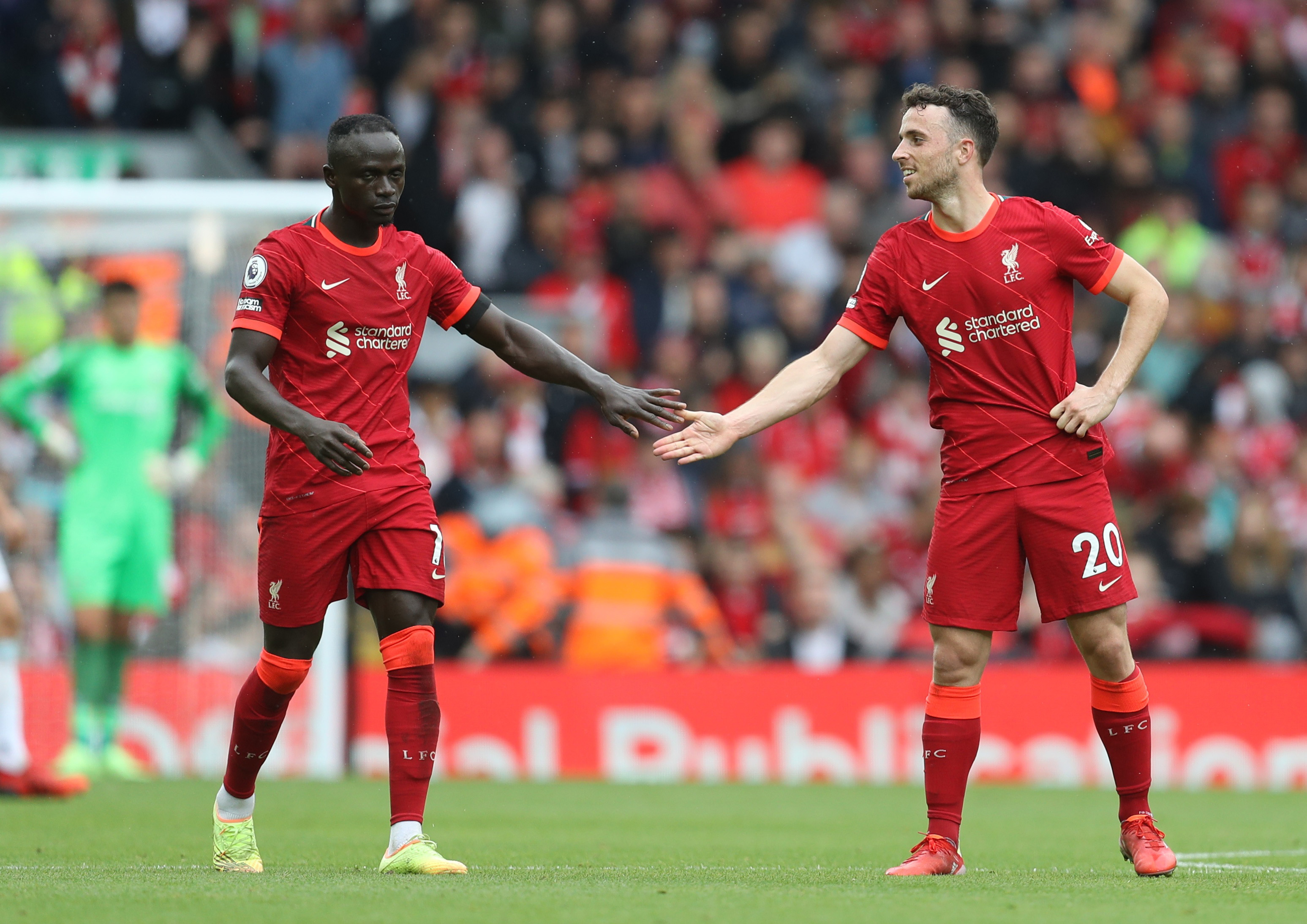 Soon the Egyptian beat Nick Pope but the goal was rightly disallowed for offside.

A 2-0 deficit would have been very harsh on Dyche’s side at that point but Sadio Mane should probably have made it so, instead of shinning Trent Alexander-Arnold’s cute pass over the bar.

Burnley continued to cause problems of their own, mainly through McNeil and Wood, and Liverpool had to rely on the strength and composure of Joel Matip and Virgil Van Dijk to snuff out the danger.

And if Tarkowski had sent a header on target after beating Alisson to the ball on the edge of the box, the visitors would have gone into the break on level terms, and on merit.

Ashley Barnes, scorer of the decisive late penalty in January, had the ball in the net again within a minute of the restart but he was well offside.

But the second goal Liverpool needed to feel any degree of comfort seemed to be coming. 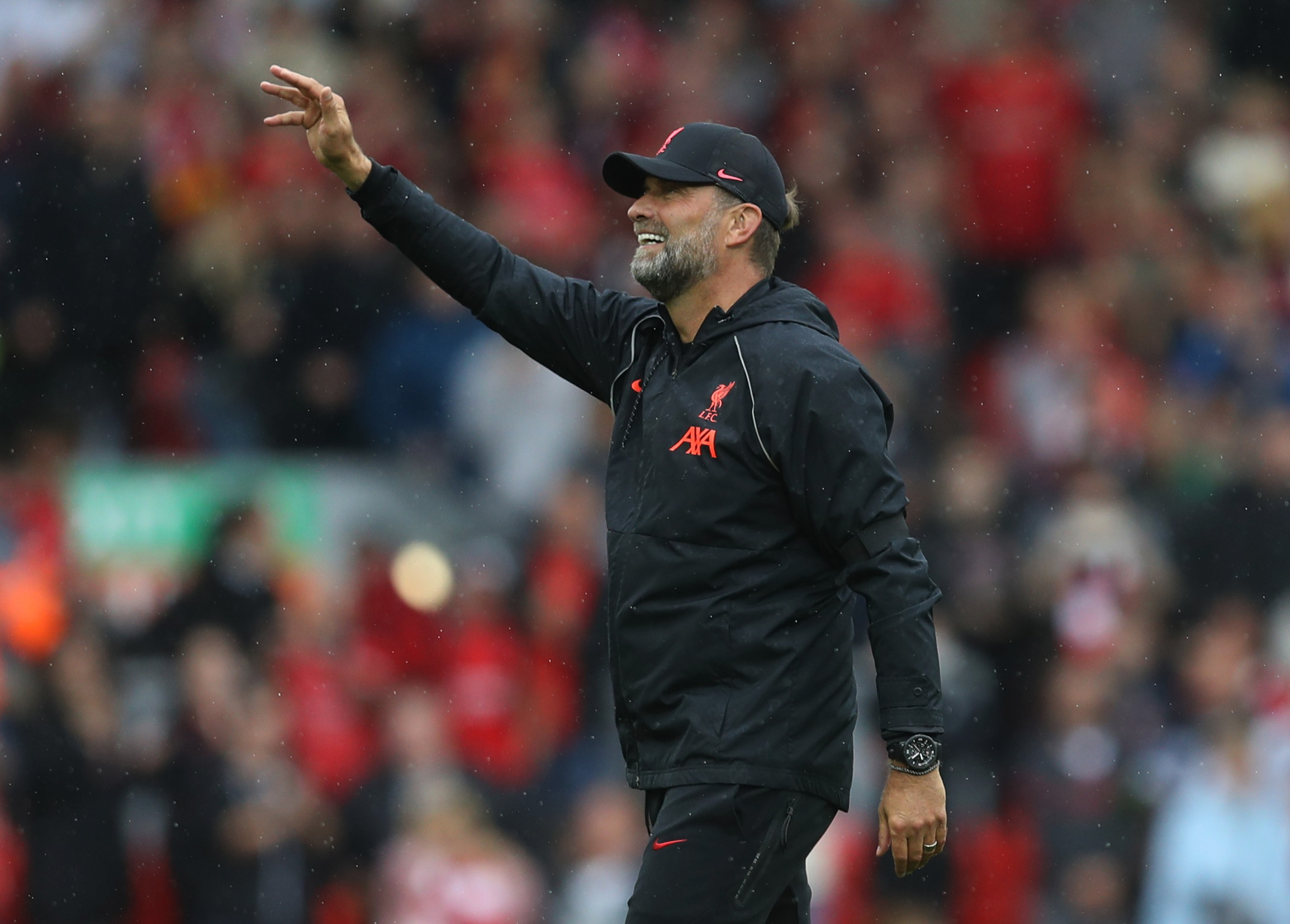 Van Dijk went close, McNeil stopped Salah’s shot going in, Mane had one shot blocked, another saved by Pope, and then sent a free header tamely into the Burnley ‘keeper’s hands

There was a spell in which Liverpool enjoyed more than 90 per cent possession, yet the numbers that mattered remained 1-0.

But then came the move of the match and the goal that settled it.

Van Dijk pinged a trademark diagonal pass to Elliott, who fed Alexander-Arnold. The full back’s clipped ball into Mane was delicious and the Senegalese’s finish was emphatic.

Barnes cleared off the line and the visitors continued to defend doggedly to keep the scoreline fair.

Alisson made two good late saves but with better finishing, Liverpool would have matched or bettered their 3-0 win at Norwich a week earlier.

It’s far too early to say whether they can match their title success of two years ago – and whether a full Anfield can make the difference.

Chapel used by nuns for 139 years gets transformed into £1.5million house