WAS that Dele Alli’s brother?

How else do you explain a goal and a performance so out of keeping with what the star’s lacklustre showings of the past 18 months or so? 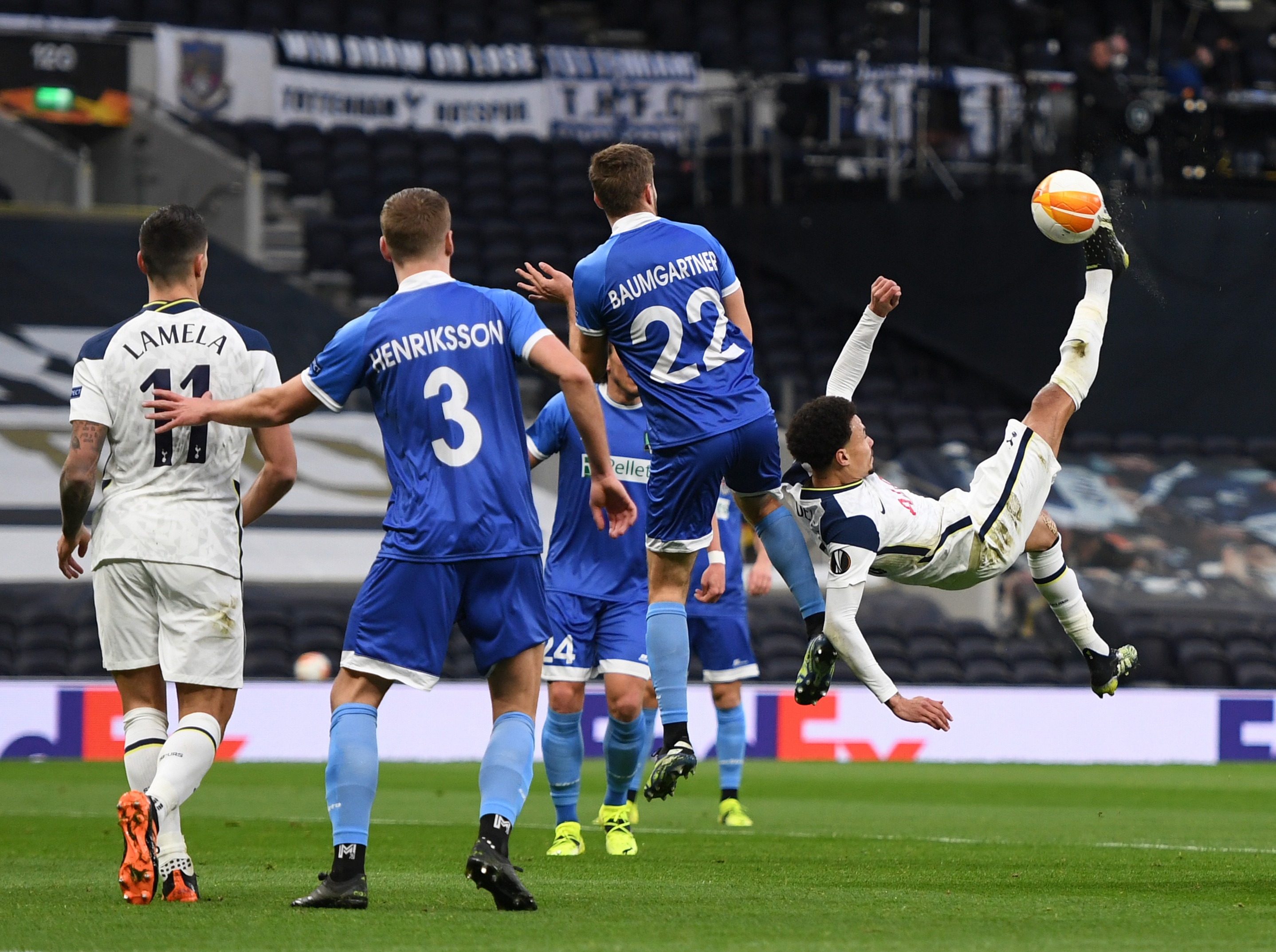 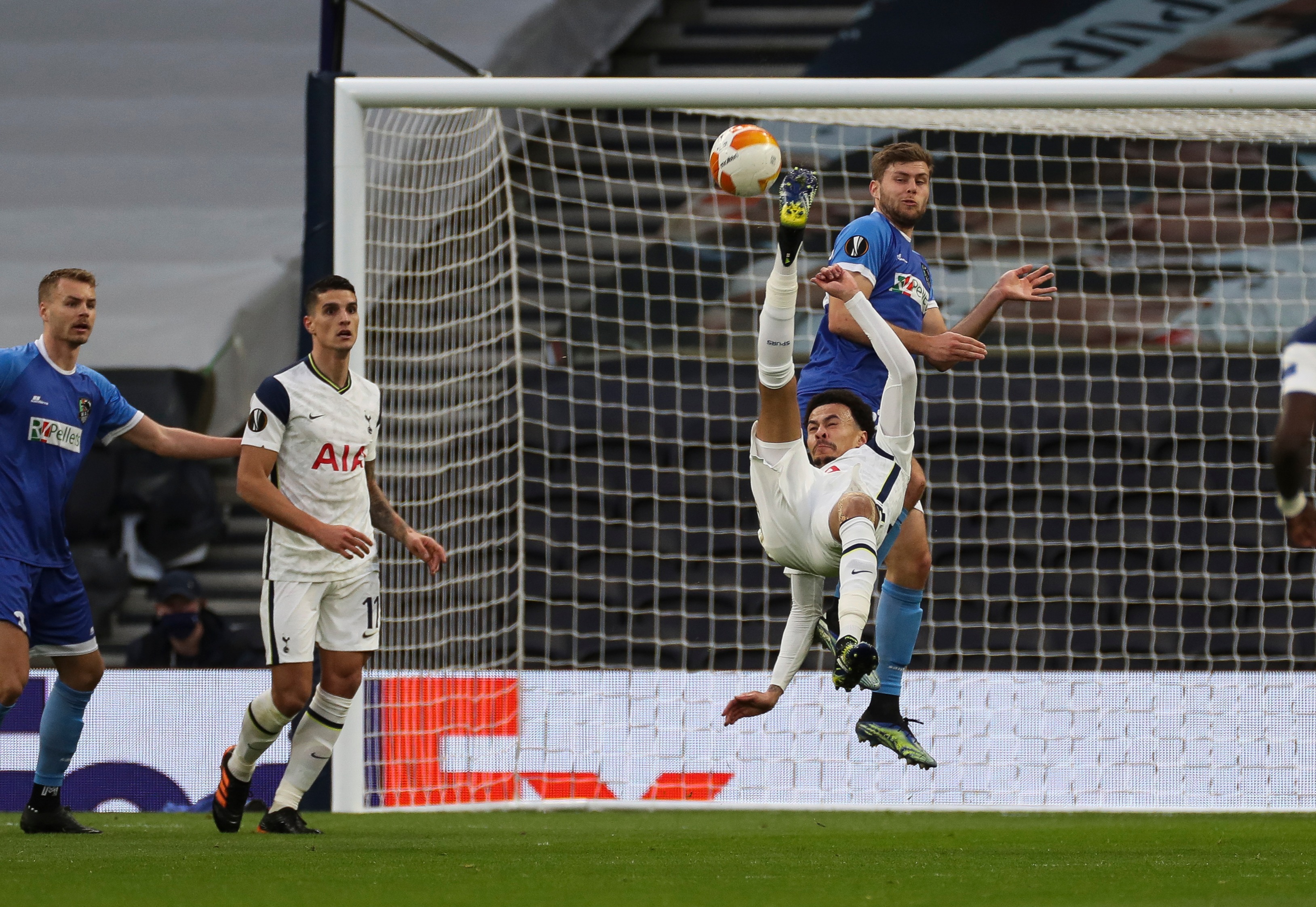 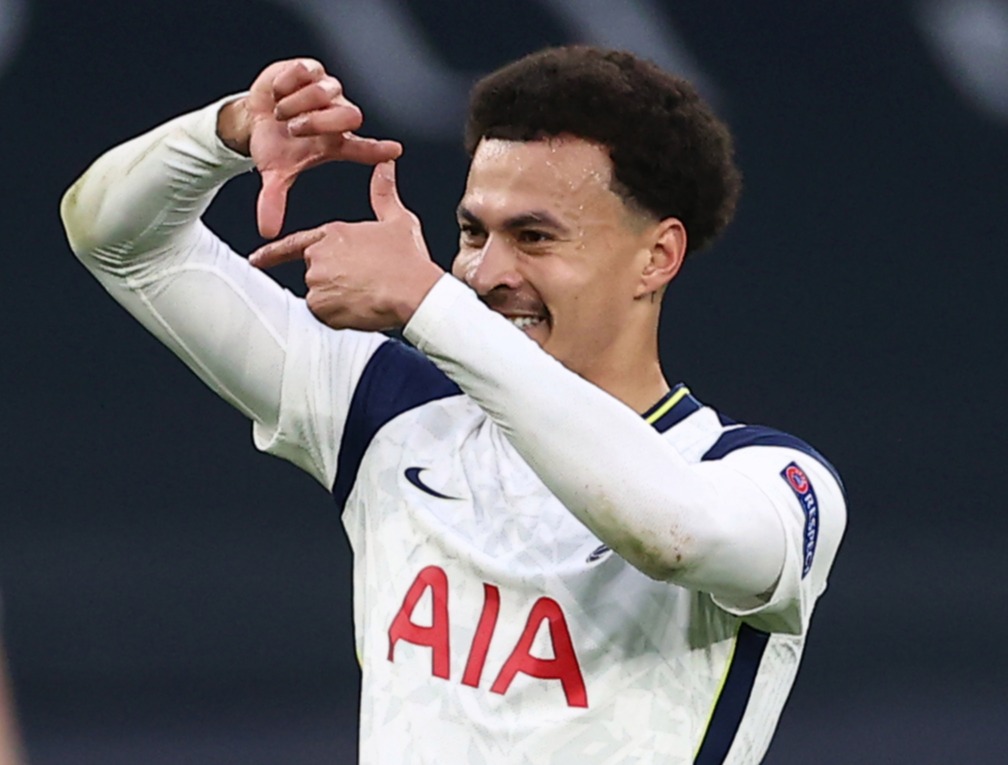 But, to paraphrase Mark Twain, Dele showed reports of footballing demise may have been greatly exaggerated as he capped a much-improved display with a stunning overhead kick that opened the scoring in the tenth minute.

He celebrated by giving a peace sign, although it is a wonder he did not turn his hand around and stick two fingers up to Spurs boss Jose Mourinho.

The Special One has hardly given Dele a chance since turning at Tottenham on his first day at work in November 2019 and having a dig at his inconsistency by asking him: “Are you Dele or Dele’s brother?”

It was not the best start to a relationship that was to grow even frostier over the following months.

To the extent there was serious talk of Dele leaving the club last month to join up with former boss Mauricio Pochettino at Paris Saint-Germain.

Mourinho held clear-the-air talks with the player – he described in the Amazon documentary as ‘f***ing lazy’ – after that proposed cross-Channel switch never materialised.

And this month he has slowly been welcomed back into the first-team fold.

After a number of encouraging cameos, he sealed Spurs’ place in the Europa League last 16 with a starring role in this second leg. 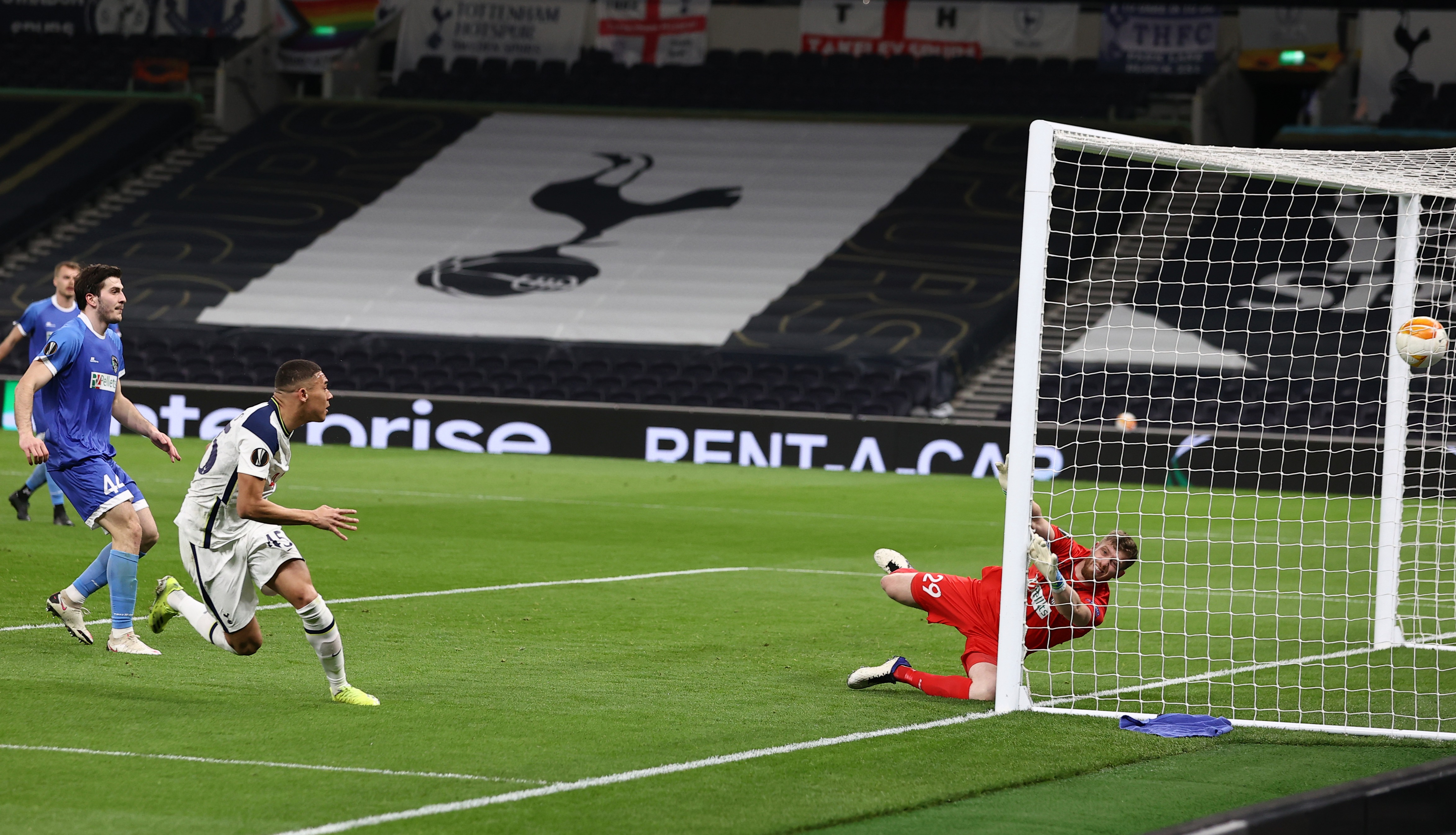 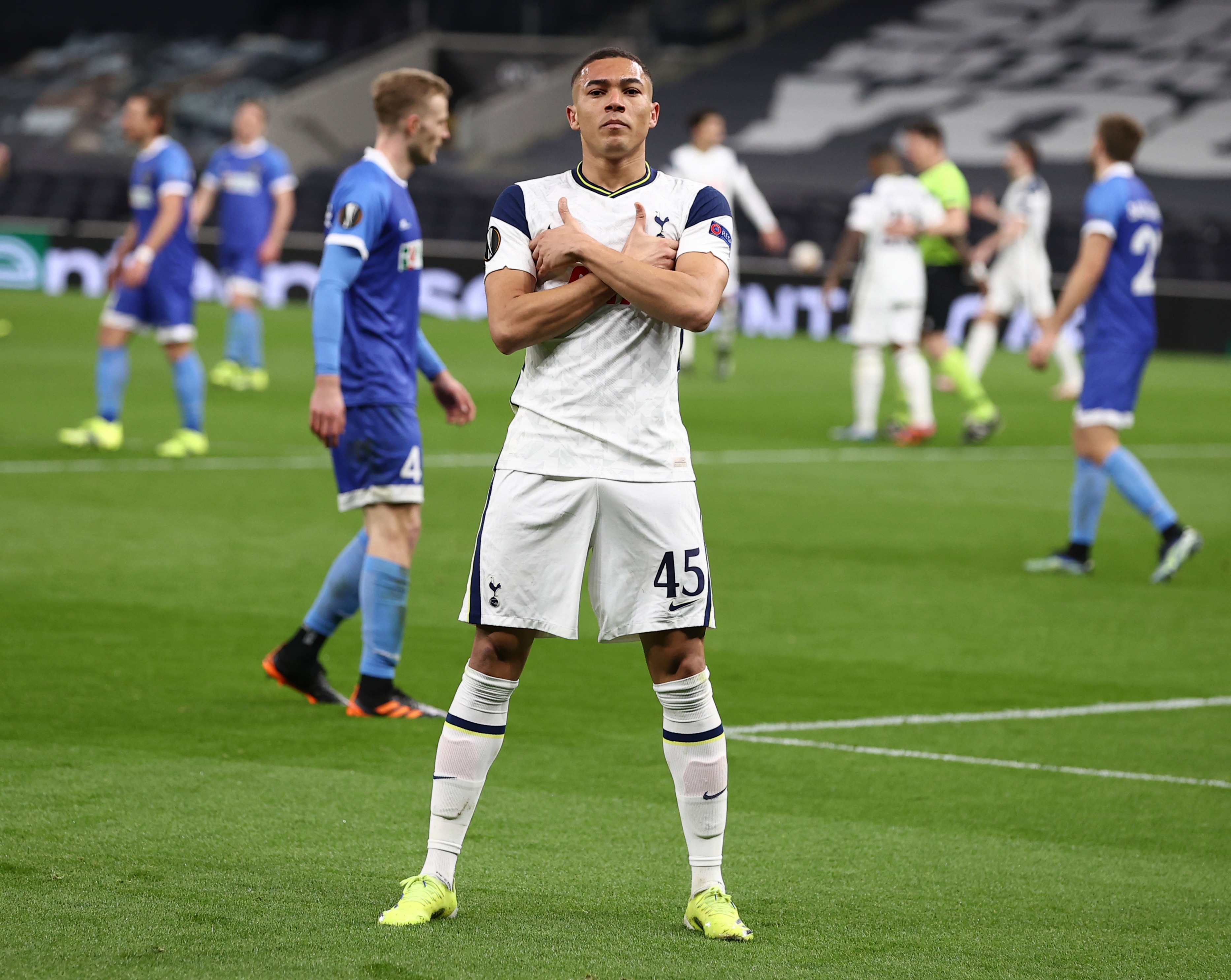 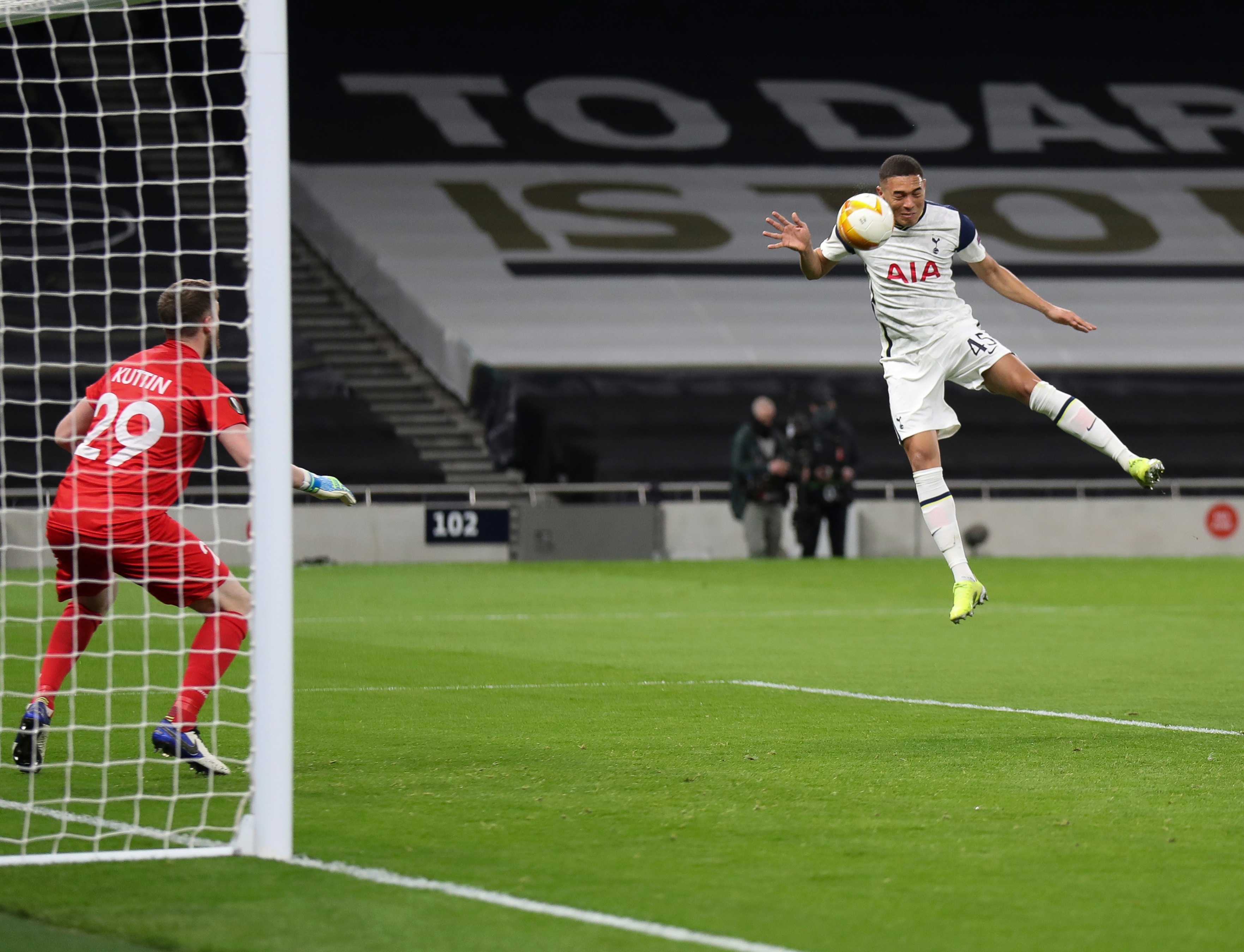 Though, already leading 4-1 from last week’s first leg, this clash was written off as a dead rubber.

In fact, in the grand scheme of things, Dele was one of the few people this encounter meant anything to – and boy did he show it.

You could sense from the determined look on his face in the line-up before kick off that, for him, this was not just another second-rate European fixture against a team of no-hopers few had previously heard of.

But there was so more to admire about Dele’s display than his outstanding opening strike.

His attitude and energy were much improved. And these enabled him to remind us all of the talent he possesses.

No more so than when he delivered a delicious cross for Carlos Vinicius to make it 2-0 shortly after the break.

It is easy to paint Mourinho as the villain in his relationship with Dele and it is true some of the manager’s public comments have not helped the situation.

But the player himself has to take some of the blame too.

His standards had slipped long before Mourinho had arrived for whatever reasons, he did not address the causes of his slump. 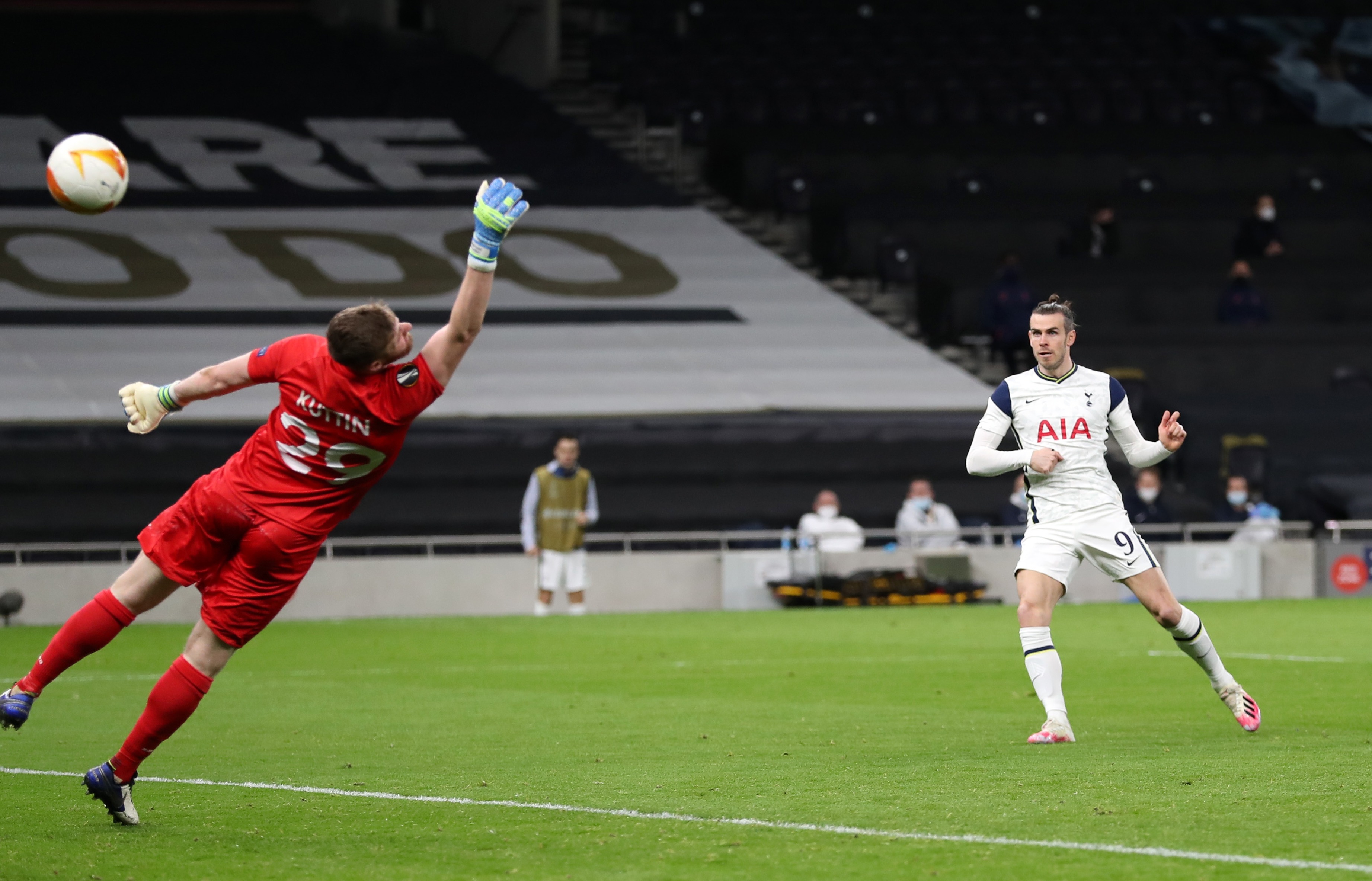 Bale scored Spurs’ third to finally give himself something to smile aboutCredit: Getty Images – Getty 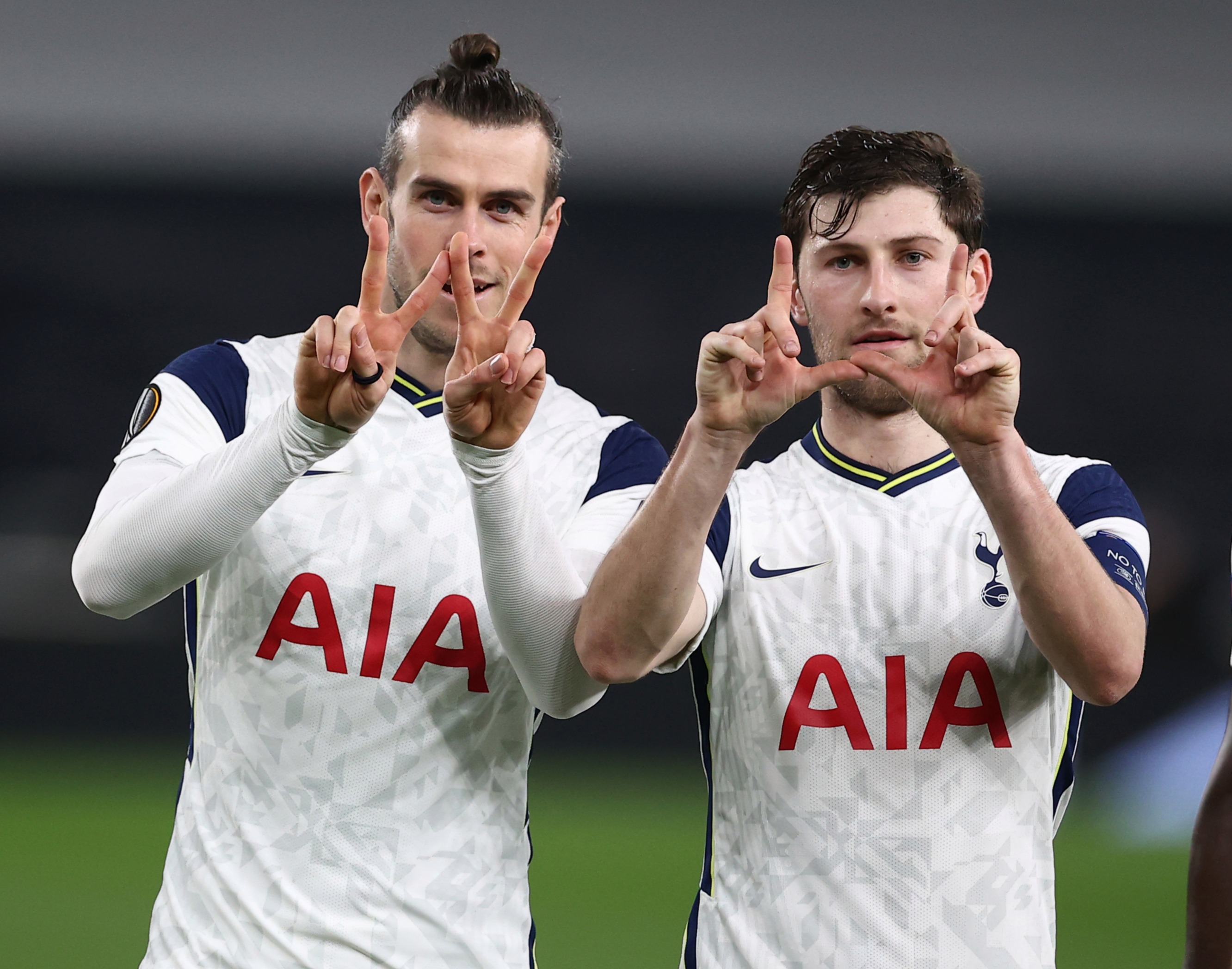 But he showed here all is not lost and that if he managed and manages himself right, he could easily return to his heights of yore.

Mourinho and Tottenham in their current plight need a player like Dele approaching anything like his best and cannot afford to discard him.

Having impressed in last week’s first leg and as a sub at West Ham on Sunday, Dele was handed his fifth start in this competition this season.

The wonderfully-named Wolfsberger manager Ferdinand Feldhofer – an Austrian if ever there sounded one –  sprang a couple of surprises for the visitors.

First-choice goalkeeper Alexander Kofler and striker Dejan Joveljic – both key players – were dropped to the bench, with Manuel Kuttin and Cheikhou Dieng, respectively, taking their places.

This was only their third-ever European campaign and their first appearance in a knockout stage, and their first-leg beating in Budapest virtually guaranteed it was going to be brief.

Coach Feldhofer admitted before kick-off his team had little chance of winning – no Schnitzel, Sherlock.

But they had the game’s first shot when Christopher Wernitznig skewed his volley over the bar in the sixth minute.

Twice he had a hand in the build up as first he cleverly played it to Erik Lamela who in turn laid it off to Bergwijn on the left. 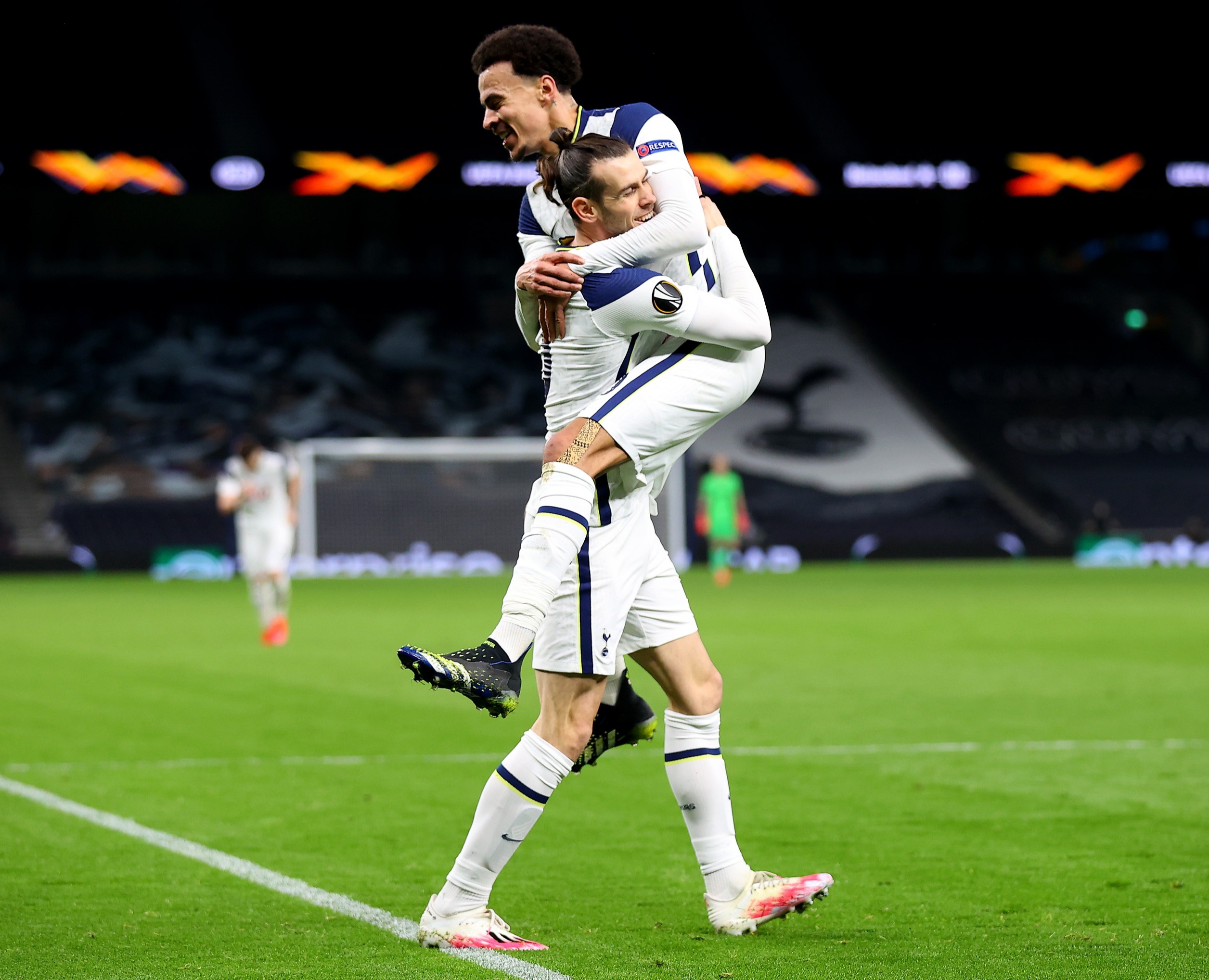 Bale and Alli proved to be the heroes as Spurs thumped Wolfsberger in North LondonCredit: Getty Images – Getty 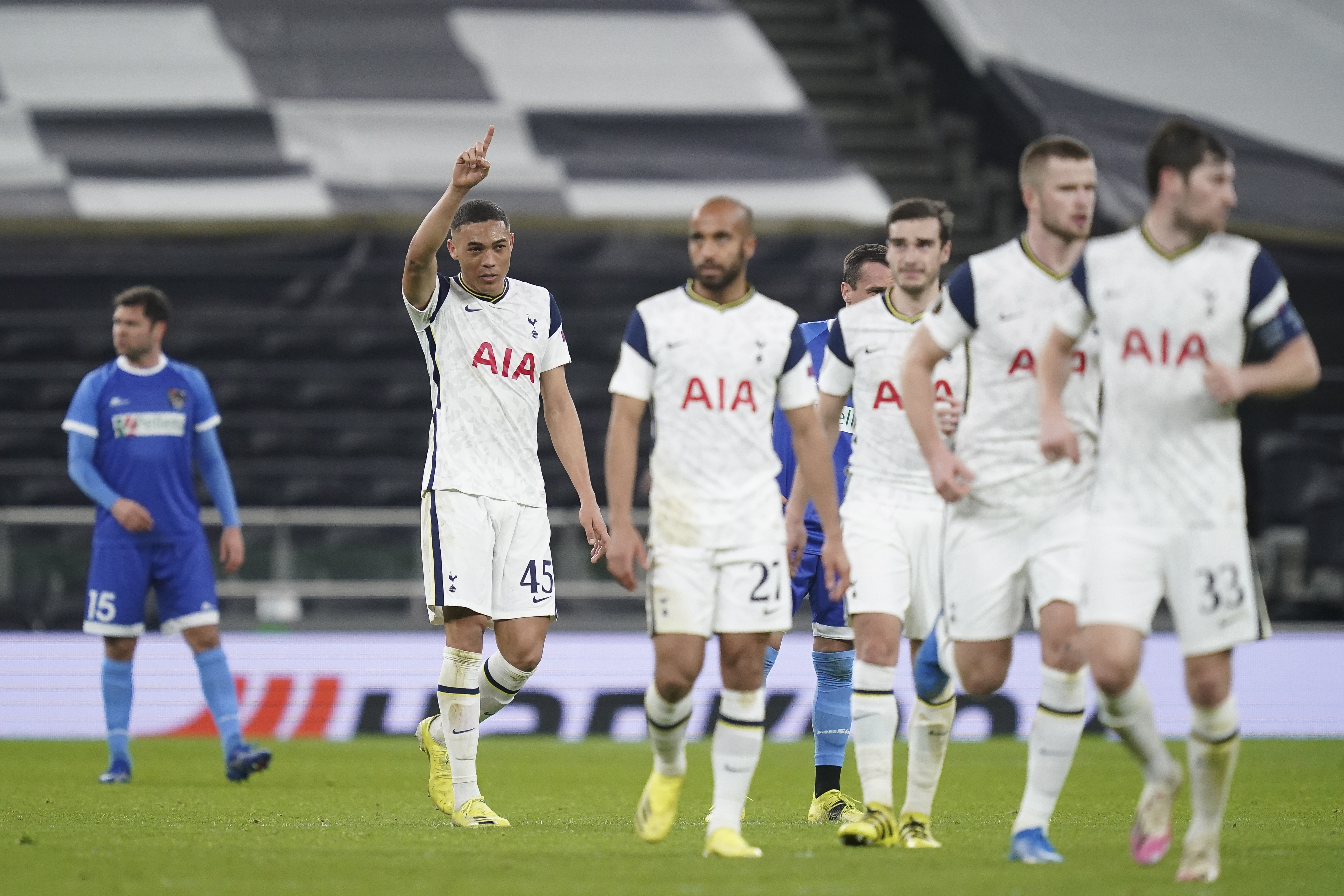 Vinicius grabbed his second of the game late on to seal a 4-0 drubbingCredit: EPA

When the Dutchman played it inside to Dele, he could not get a shot away so it passed it out to the right flank to Matt Doherty.

And when the Irish defender crossed back to Dele around the penalty box the area the options were equally as limited.

But after taking one touch – which was not the best – with his back to goal, he produced an overhead kick to score.

It even had his old foe Mourinho applauding on the touchline.

But the expected onslaught did not happen at first as Jonathan Scherzer fired wide of the Spurs goal from outside of the box.

Vinicius then went close to doubling Tottenham’s lead before the break but after rounding keeper Kuttin, his shot was blocked on the line by Gustav Henriksson.

But the Brazilian made no mistake when he rose at the far post to head in Dele’s cross to make it 2-0 in the 50th minute.

And Dele’s cross-field pass set up Bale to net the hosts’ third in the 73rd minute.

Dele left the field to an ovation from his team-mates and staff in the stand when he was replaced by teen Dane Scarlett in the 82nd minute – and deservedly so.

And the rookie’s quick pressing set up Vinicius to fire home his second of the night to complete the rout.