Frank de who? It is not the sort of football he used to play under Arsène Wenger at Arsenal in his prime but Patrick Vieira is off the mark as Crystal Palace manager after a battling performance secured their first point of the season against an impressive Brentford side.

Following in the footsteps of Frank de Boer – who was dismissed as Palace manager in 2017 after four defeats to start the campaign – was never going to be easy but Vieira has already picked up more points than the Dutchman managed. Whether he can build on that and steer Palace well clear of a relegation battle remains to be seen on the evidence of a disjointed display that improved as the afternoon went on. The visitors had looked more likely to come away with the spoils.

“It’s mixed feelings because I was quite pleased with the team’s performance but there is a little bit of frustration that we didn’t score the goal,” said Vieira, who is the first Palace manager since Alan Pardew not to lose his first home match. “But we can build something on that performance and use it as a benchmark.”

These two London clubs had not met in the league since January 1964 – almost a decade before either manager was born. But while Thomas Frank stepped effortlessly into Dean Smith’s shoes when he departed for Aston Villa in 2018 having spent two years as his assistant, Vieira arrived in south London at the start of July to replace Roy Hodgson and has appointed several new faces to his coaching staff, including the former Wales assistant manager Osian Roberts.

A spectacular reception to welcome the French World Cup-winner that featured a banner stretched the width of the Holmesdale Road End with the message “as the soul of Palace returns the terraces come alive” was slightly marred by the absence of a number of supporters who were still queuing outside due to a ticketing problem.

Having missed the opening-day defeat to his parent club, Chelsea, Conor Gallagher was handed his Palace debut in midfield with Christian Benteke restored in attack. 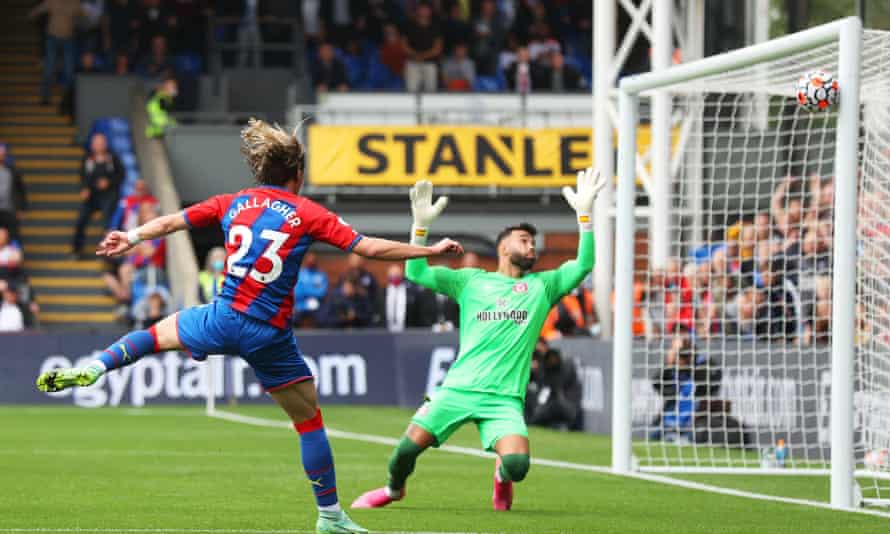 But after seeing off Arsenal last week, unchanged Brentford underlined in the first half they will be more than a match for many in this division as Palace were largely pinned back aside from one early flowing move involving Wilfried Zaha that ended with Gallagher’s effort cannoning back off the crossbar.

Mbeumo’s curling free-kick from a tight angle that bounced off the bar after the impressive Nigerian midfielder Frank Onyeka had been scythed down just outside the area was the closest the visitors came to turning their superiority into a goal, despite registering 10 shots.

“We were very aggressive going forward but we didn’t have enough quality or coolness to create big chances,” said Frank. “We need to be more composed.”

The break gave Palace an opportunity to regroup and they started the second half with much more purpose. Benteke should have done better from Joel Ward’s excellent cross, but the Belgium striker headed over.

Looking increasingly frustrated at his side’s shortcomings in attack, Zaha finally came alive midway through the half when his run set up James McArthur to shoot from just outside the area and draw a brilliant save from David Raya.

Toney could have broken the deadlock had his header from a corner been on target, while Vieira looked relieved to see the striker’s ball across the face of goal elude everyone.

Fired up by Martin Atkinson’s failure to punish Christian Nørgaard after the pair had clashed, Zaha almost found a breakthrough late on when his cross nearly picked out Benteke, but Palace had to settle for just a point to begin Vieira’s new era in south London.