FULHAM’S 70-year wait for a win at Turf Moor goes on after Ashley Barnes’ cool finish rescued a point for the Clarets.

But at least Scott Parker’s team kept their fellow strugglers within striking distance, thanks to a bizarre goal from full back Ola Aina four minutes into the second half. 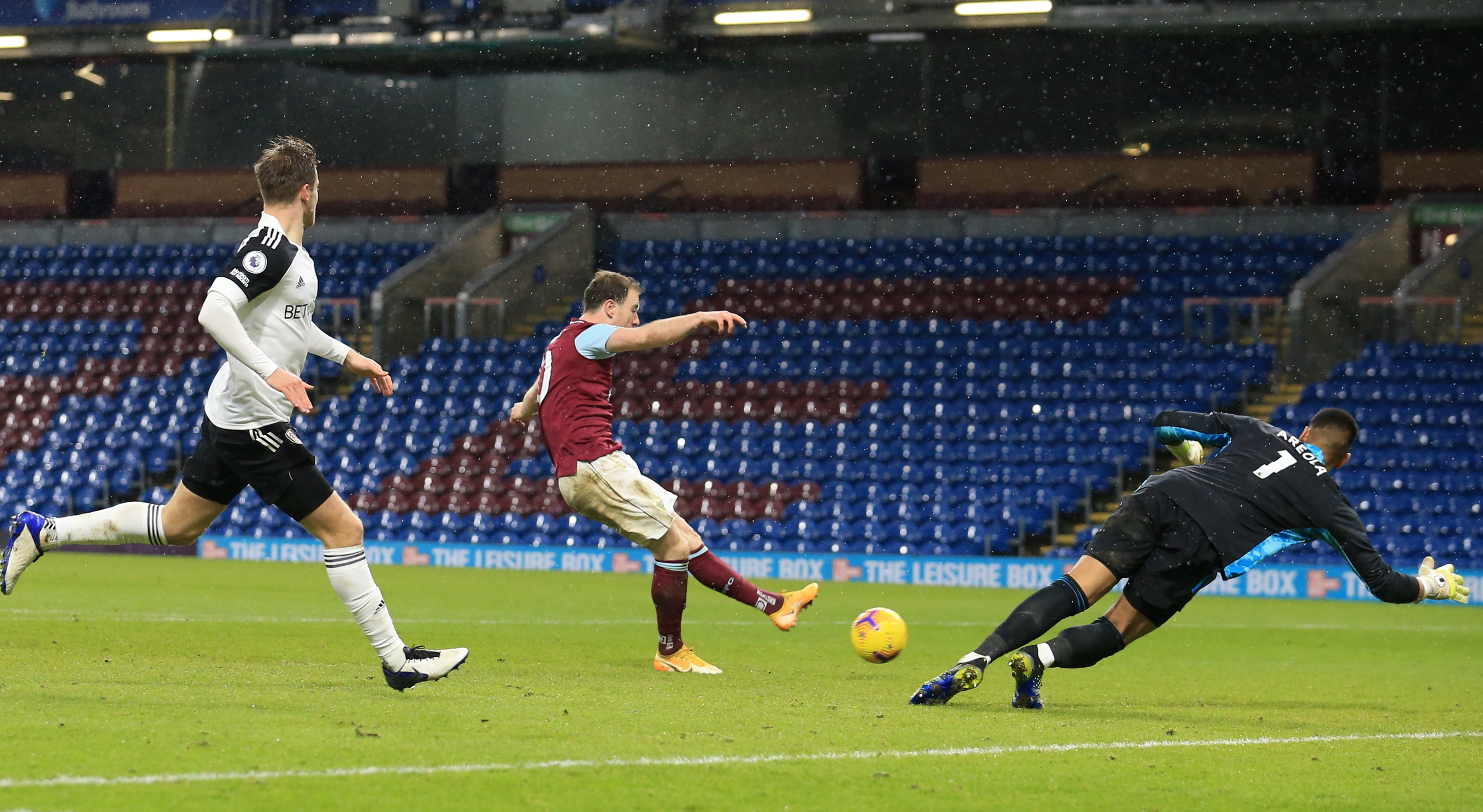 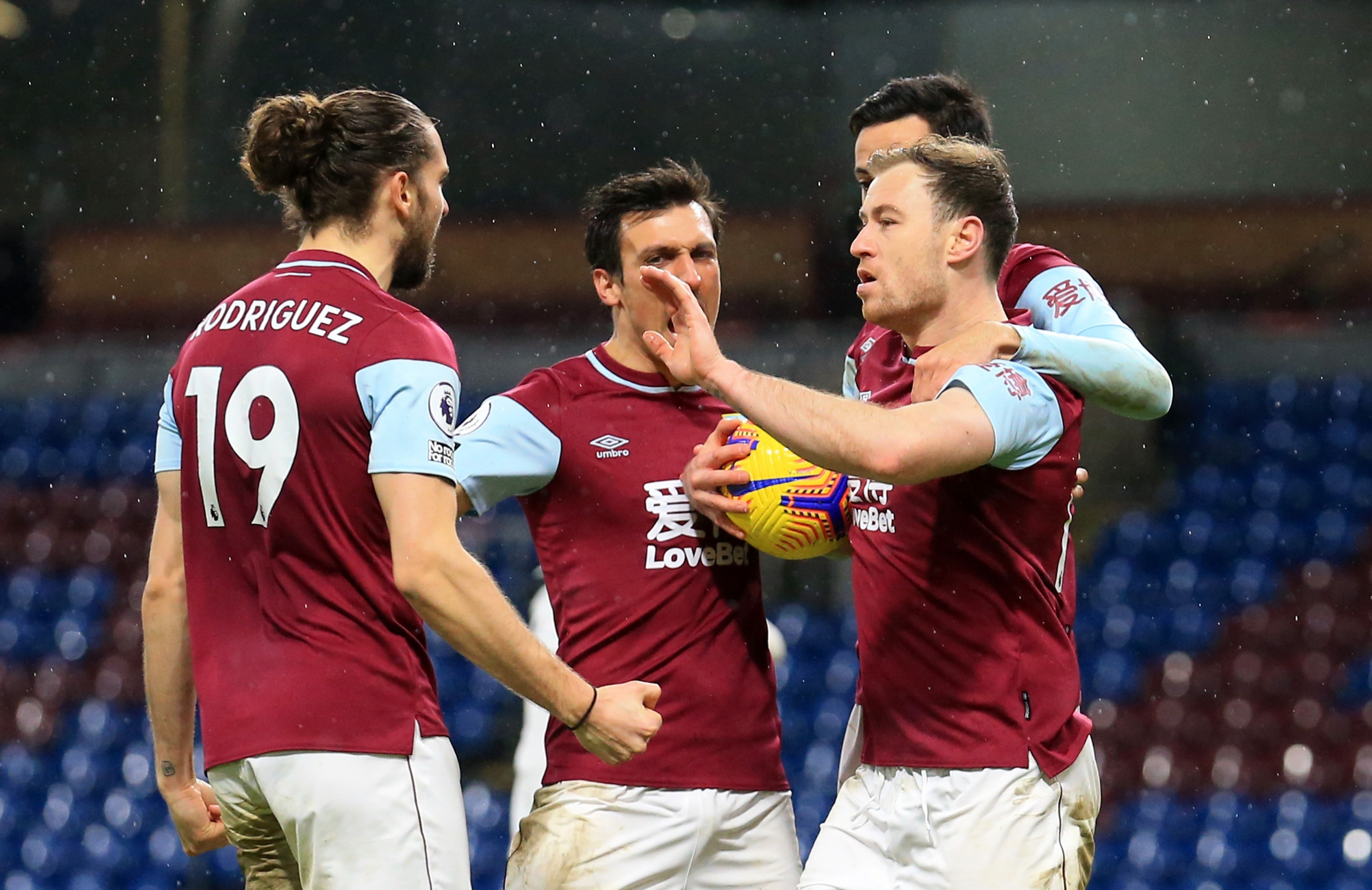 Barnes and Rodriguez linked up to bring Burnley back into the contestCredit: Getty – Pool

The Cottagers are also a point closer to 17th placed Newcastle – and with winnable games against Sheffield United and Crystal Palace to come next, they will fancy their chances of climbing out of the drop zone

Aina did not know much about it as Joachim Anderson’s speculative flick from an Ademola Lookman corner bounced up and struck his team-mate on the chest.

Burnley substitute Robbie Brady should have done better as the ball flew past a startled Nick Pope towards the far corner.

But Brady’s attempted goal-line clearance flew off the side off his boot, and into the roof of the net.

That was Fulham’s first attempt at goal, and their lead lasted just three minutes – which was not too surprising given their miserable here.

This was Fulham’s 31st visit to these parts since their last win, and they have now returned to London ruing 25 defeats and half a dozen draws

That is their worst run of away results against any opponents. So despite striking first, they should probably see this as a point gained rather than a couple given away.

The fire and attacking drive that brought them a shock win at Everton at the weekend was missing this time, which makes the draw look even more acceptable.

Burnley were also coming off a confidence-boosting away win, having put Crystal Palace to the sword. 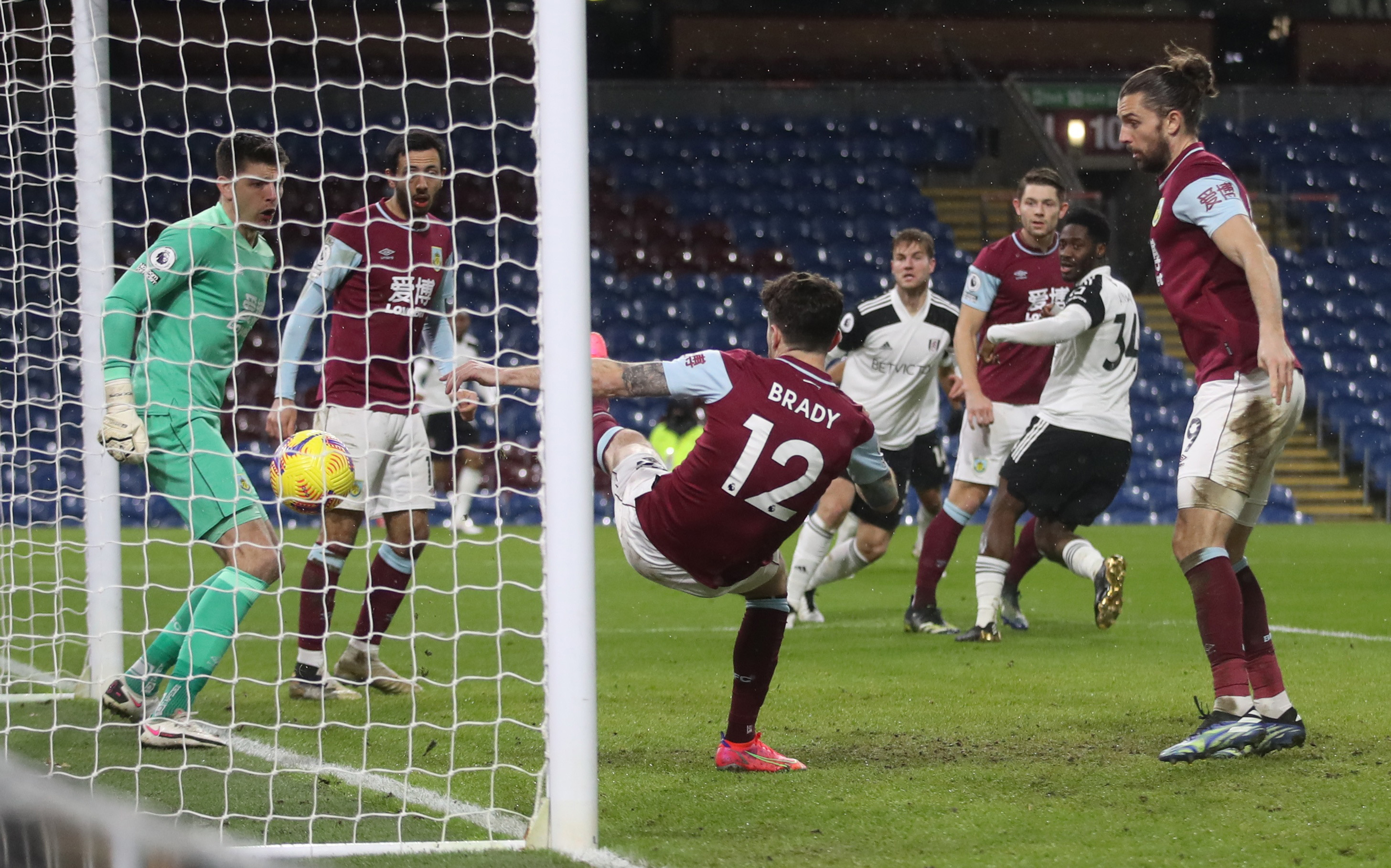 Aina’s flick from the corner beat Robbie Brady on the far postCredit: Reuters 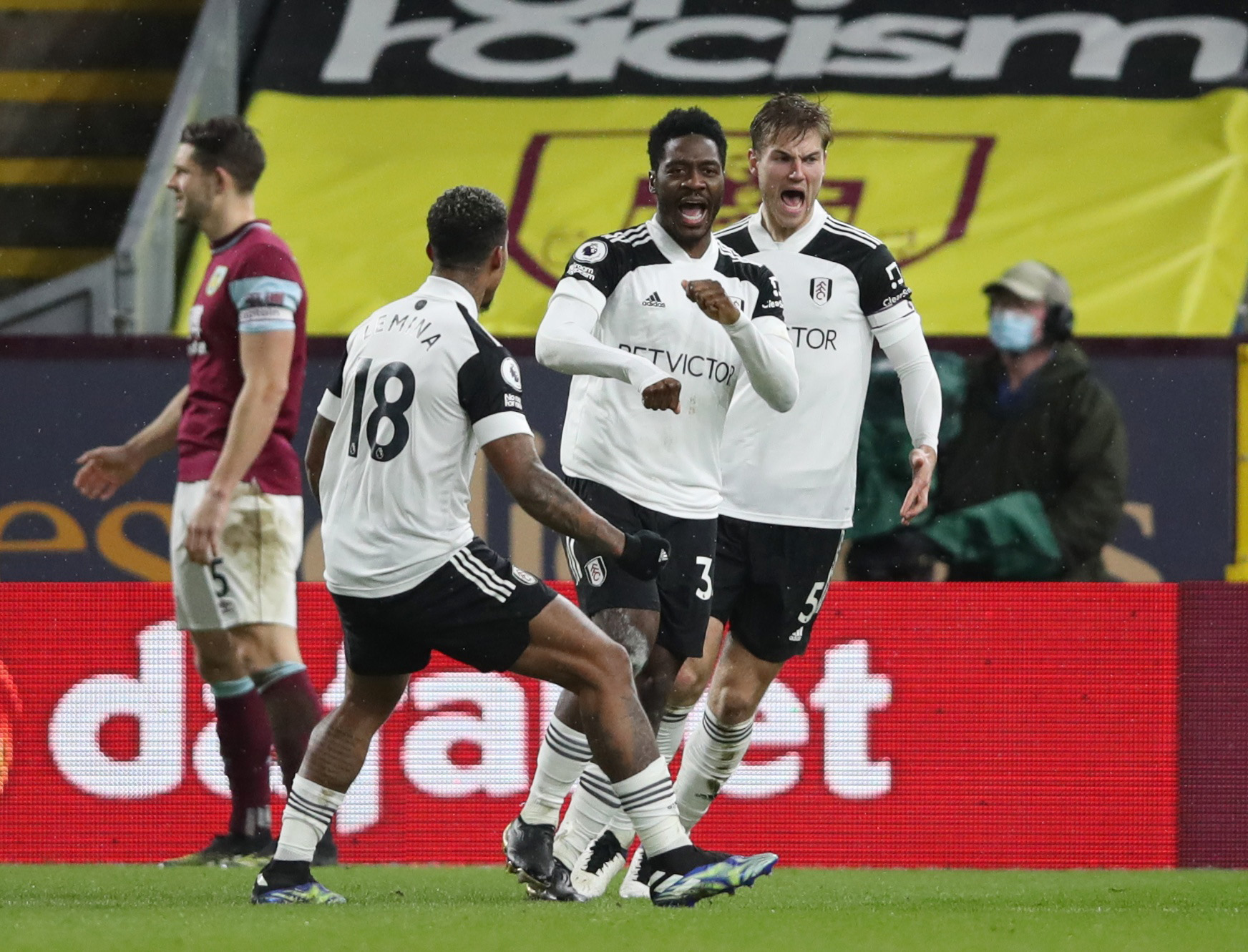 Aina celebrates putting the visitors ahead in the second halfCredit: Reuters

But they also opted for a softly-softly approach early on, with neither side committing too many men forward.

The Clarets might have been in business if Barnes had listened to the yells of ‘leave it’ from team-mate Johann Gudmundsson, who was unmarked a couple of yards behind him.

Fulham’s first foray into the Burnley box resulted in a ridiculous VAR review after Bobby de Cordova-Reid clearly fell over the ball while trying to wriggle away from Matt Lowton.

Ademola Lookman provided a more realistic threat after clever footwork allowed him to glide away from James Tarkowski.

But the acting Burnley skipper whipped the ball off his toes with a brilliant recovery tackle just as the Fulham man was about to pull the trigger.

Ashley Westwood warmed the hands of Fulham stopper Alphonse Areola – and that proved the only save either keeper had to make in a first half, where ‘cagey’ would have been a more than generous description of events

The Clarets did look menacing from set pieces, with James Long heading a Dwight McNeil cornet over the bar, and Areola doing nothing to calm his defender’s nerves as he flapped at Westwood’s inswinging free kick. 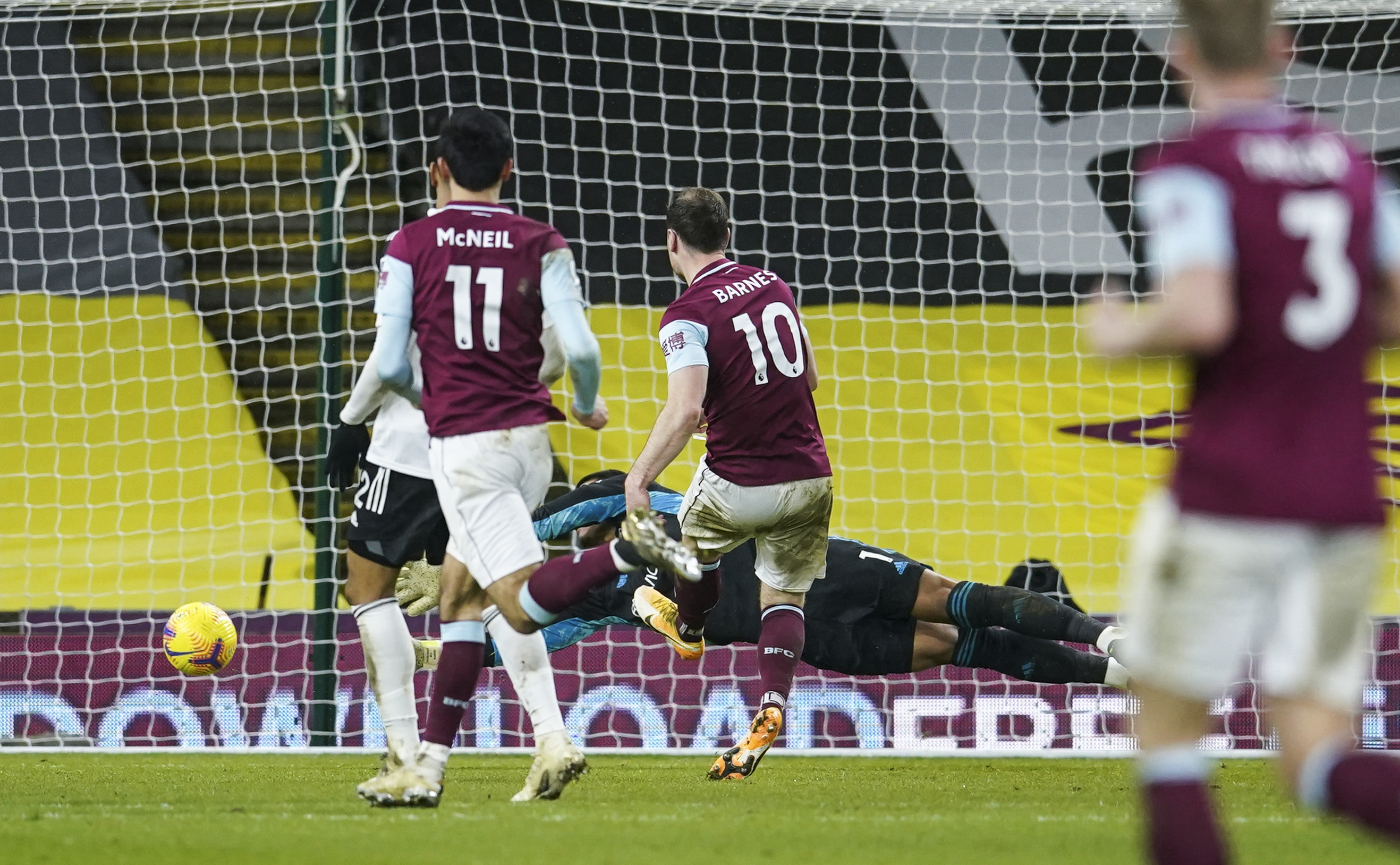 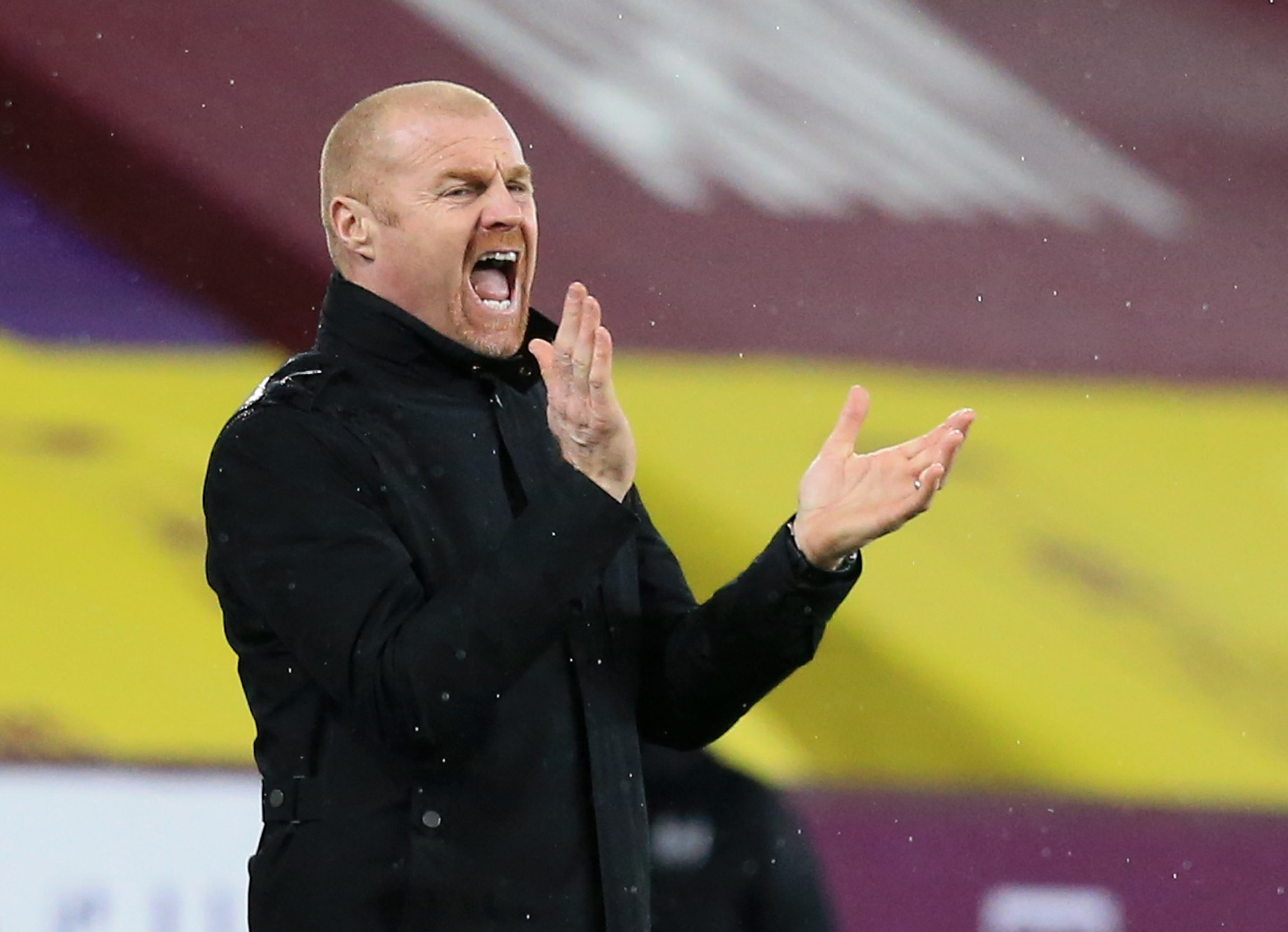 De Cordova-Reid hackled the ball clear to spare his keeper’s blushes, and Burnley carved pout the best chance of the opening period right on the stroke of half time.

Central defender Tarkowksi decided there was so little happening at his end of the field that he could afford to venture upfield, and a clever one-two with McNeil took him behind the Fulham, defence

He drove the ball across the face of goal, and it was begging for a final touch.

Barnes and Rodriguez both slid in, but the ball flashed agonisingly past their outstretched boots.

But after a dire first half, the game suddenly burst to life, with Aina and Barnes both finding the net in quick succession.

Aina had barely finished celebrating before looking on disconsolately as Jay Rodriguez gave him and Ruben Loftus-Cheek the slip with a clever dummy that sent him charging towards goal.

He picked out his co-striker with an inch-perfect cross, and Areola made his task easier by stumbling to the deck just as Barnes was wondering where to place his shot.

But the Fulham keeper and his team-mates picked themselves up and ensured they went back with something to show for their troubles.