CASEMIRO struck in stoppage time with a Cristiano Ronaldo-style header.

And in doing so he stopped a different Manchester United substitute making it all about him. 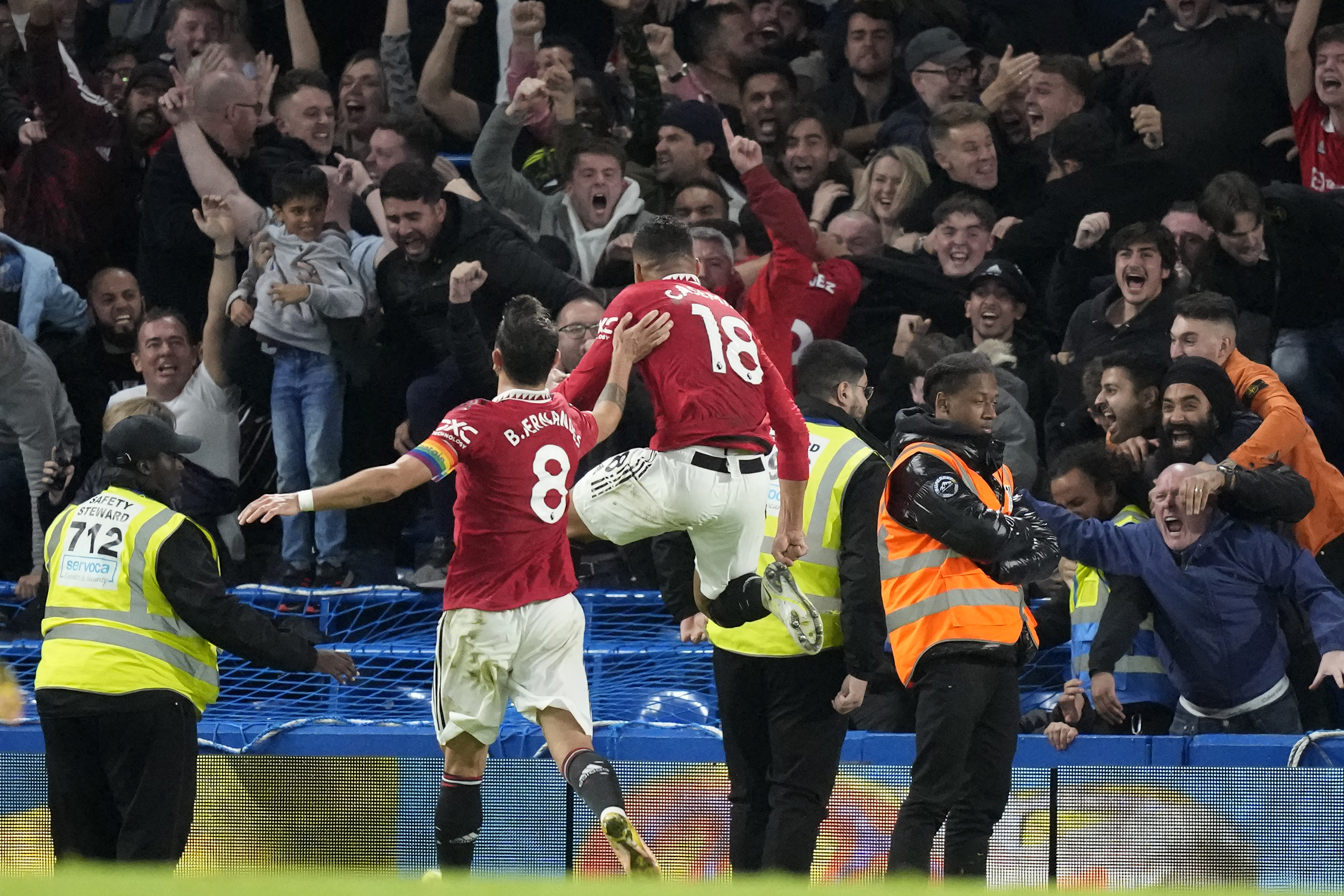 The dramatic equaliser sparked wild scenes in the away endCredit: AP

Just when Manchester United boss Erik ten Hag must have been wishing Scott McTominay had refused to come on as a sub, just like Ronaldo, the Brazilian’s late header snatched a deserved point for the visitors.

The game was petering out into the goalless draw it probably deserved to be when the Scotland international wrestled fellow sub Armando Broja to the ground in the penalty area.

Even before the age of VAR, it would have been silly. With cameras there to back up referee Stuart Attwell’s decision, it was unforgivable.

Just as with Ronaldo’s incredible sulk at Old Trafford on Wednesday, the offence was there for all to see. 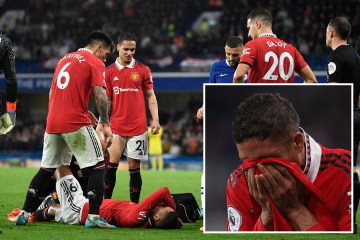 Up stepped Jorginho to send David De Gea the wrong way and turn the game in a very different direction to the one you would have expected after the opening half.

But as the home fans were waiting to celebrate their first win over United in ten attempts, the visitors finally beat home goalkeeper Kepa Arrizabalaga with a header from a Luke Shaw cross that Ronaldo himself would have been proud of.

Former United captain Roy Keane was half-joking at half-time when he wondered what would have happened if Ronaldo had been presented with the chances that Marcus Rashford and Antony squandered for United.

Come to think of it, what if Chelsea co-owner Todd Boehly had talked ex-boss Thomas Tuchel into signing the living legend in the summer?

Might he have done something with the three glimpses of goal that Blues frontman Pierre-Emerick Aubameyang had before the break?

We’ll never know and the great man’s decline makes you less certain of the answers that you once would have been.

In the end McTominay and Jorginho, then Casemiro made the difference.

Graham Potter’s Chelsea just about deserved to preserve their new boss’ unbeaten start, especially after he changed tactics to stem the United tide.

But they could not have complained if the visitors had turned 35 minutes of superiority into a victory.

Potter had overcome United in his two previous attempts.

But Ten Hag’s side are unrecognisable from the team deservedly beaten 2-1 at home by Potter’s Brighton on the opening weekend of the season – let alone the rabble thrashed 4-0 at the Amex in May.

Any member of the United 11 that had put in their best performance of the season in the victory over Spurs had the right to feel hard done by if dropped.

Fred was the unlucky man, but Ten Hag had a clear plan.

One way of solving the riddle of who should be the midfield pairing in front of the defence is to put just one player there.

Casemiro was asked to do the work of two men and, frankly, he looked well up to the task.

Although United’s formation was a 4-2-3-1 in theory, in practice Christian Eriksen pushed up on Jorginho out of possession and formed a formidable attacking four behind Rashford when United had the ball. 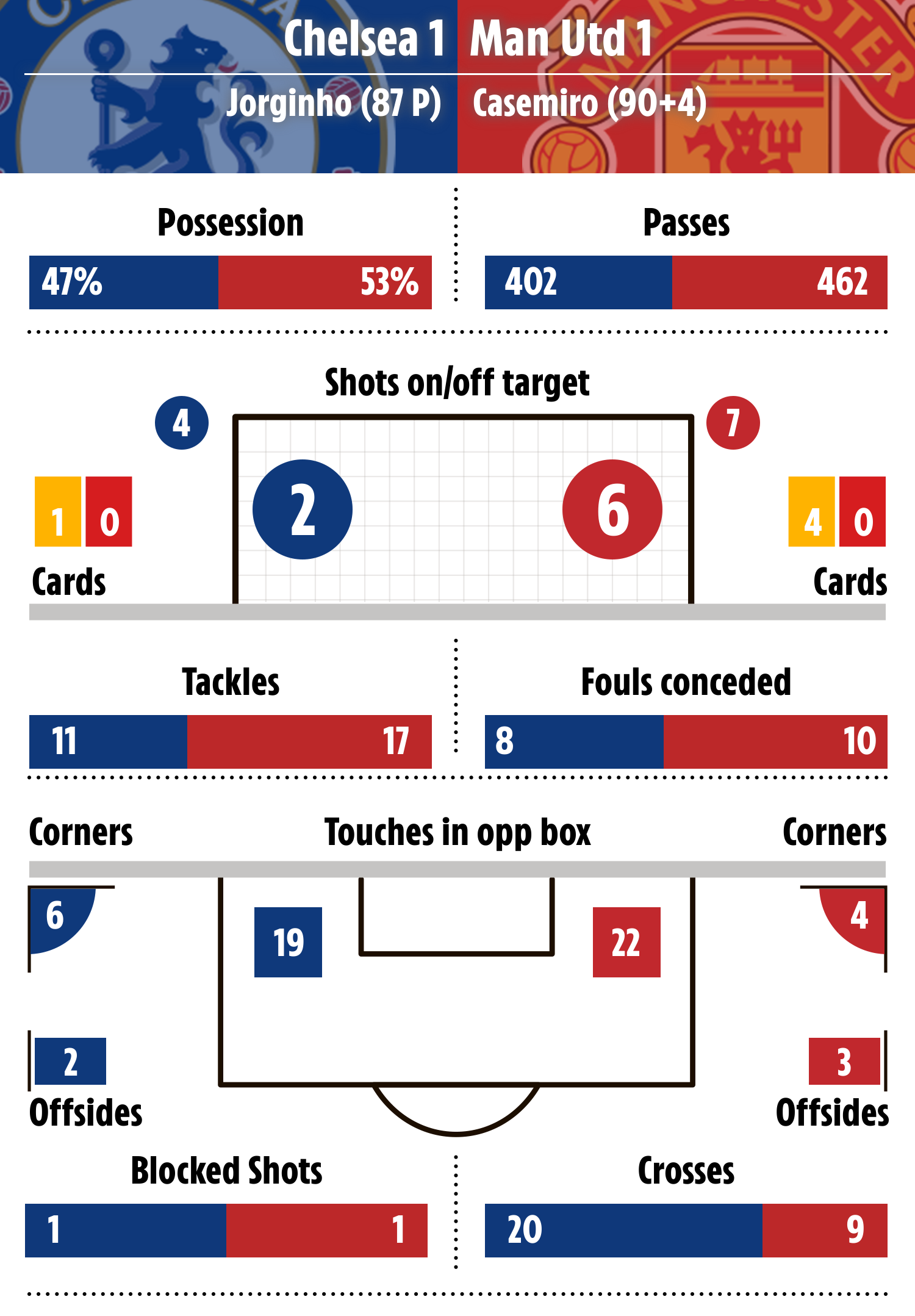 The result was that Chelsea were struggling to make it out of their half at times and United should have turned their dominance into a goal in the 28th minute.

Arrizabalaga did well to smother Rashford’s shot but someone playing up front for Manchester United, and with World Cup ambitions, needs to be converting that kind of chance.

After 35 minutes, Potter had enough of watching his midfield being overrun. Off came an uninjured Marc Cucurella, and on came Mateo Kovacic on the left of a diamond as the hosts switched to a 4-4-2.

Aubameyang had three half chances in quick succession but could not convert any of them, thanks in the final case to a challenge by Diogo Dalot.

And it was still United who squandered the best chance of the half when Antony fired wide with his (much) weaker right foot. 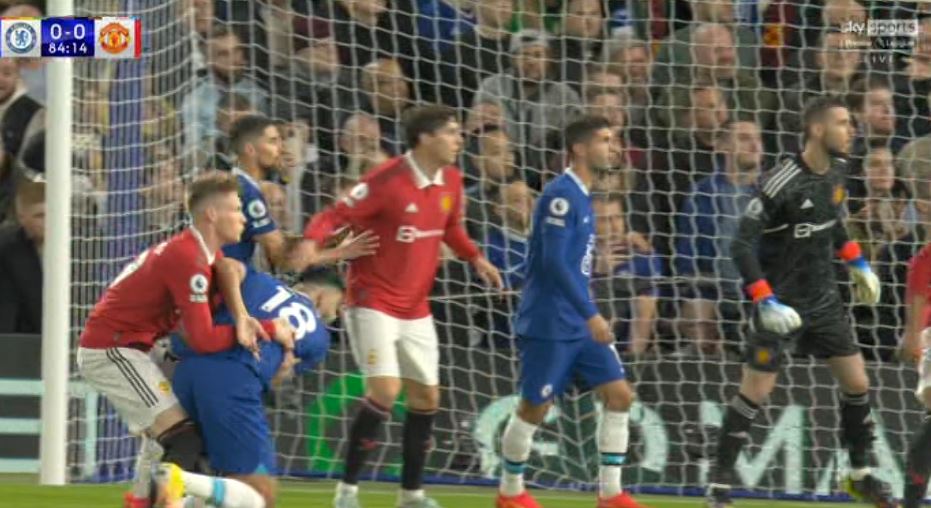 Scott McTominay gave the penalty away when he wrestled Armando Broja 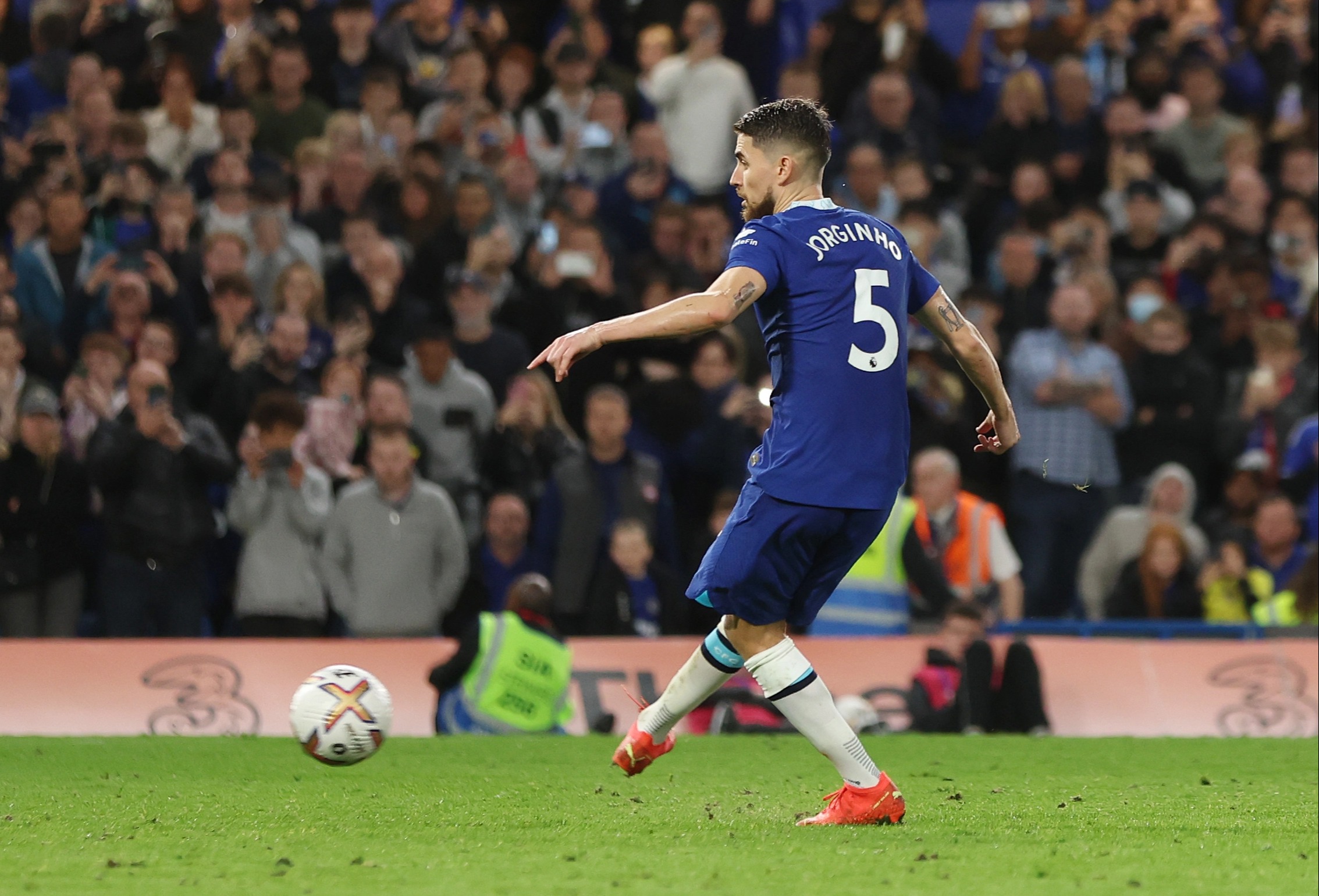 Jorginho thought he had won it from the spotCredit: Richard Pelham / The Sun 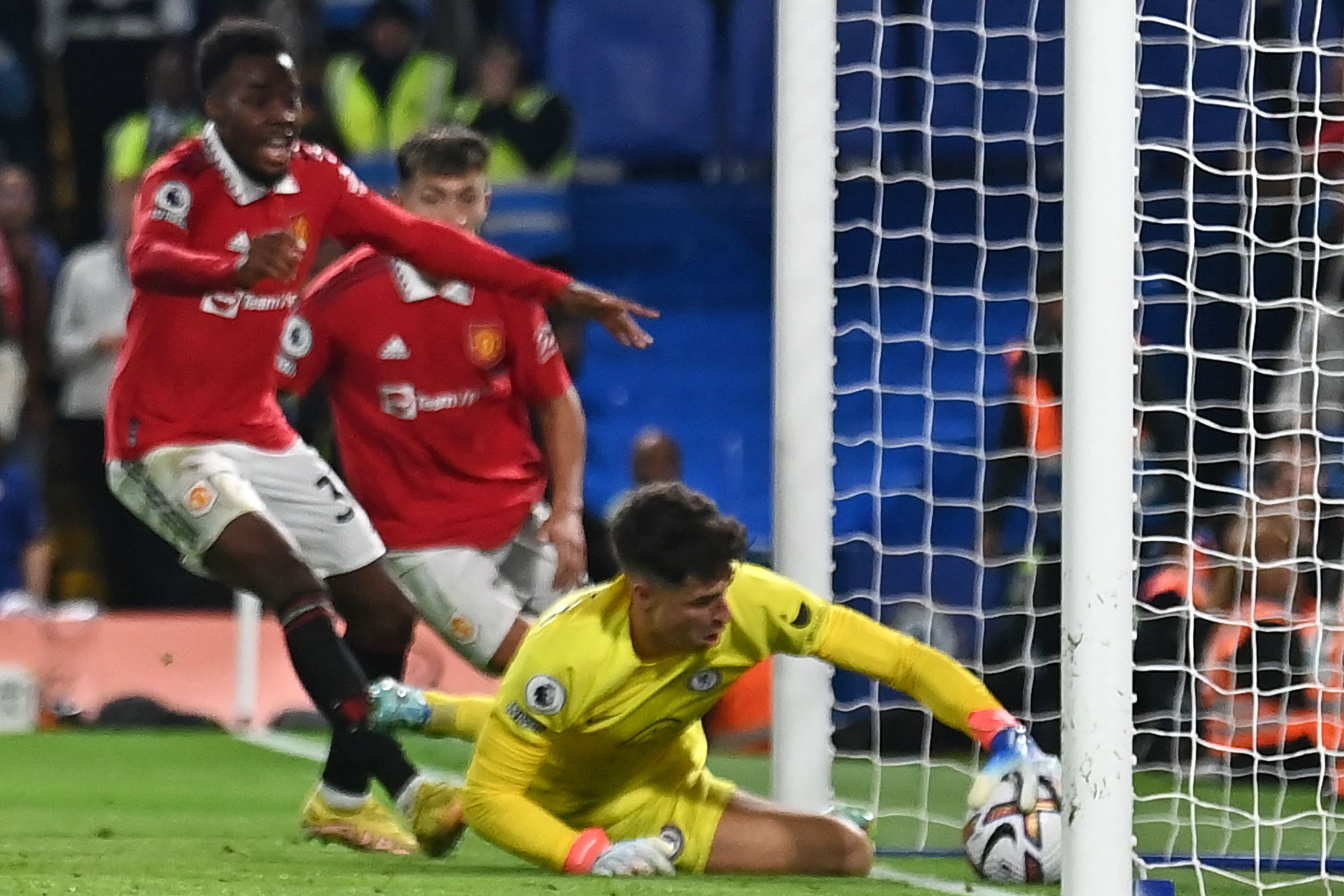 Kepa Arrizabalaga could not get the ball away before it crossed the lineCredit: AFP

Ten Hag made the next move in the tactical battle, throwing on Fred for the disappointing Sancho after just 51 minutes.

Then United were forced into another change. Raphael Varane was in tears after suffering a knock that he clearly feared would rule him out of going to Qatar.

The home fans taunted the Frenchman as he walked around the pitch and it was all getting a bit unsavoury.

Some United supporters were marking rainbow laces weekend with the homophobic chant specifically directed at Chelsea.

On the pitch, things had become a bit scrappy, with neither team able to take the game by the scruff of the neck.

Trevoh Chalobah headed a Mount corner on to the crossbar, Kepa pushed away a Fernandes long-range shot, but high-quality football and chances were rare.

Then came McTominay’s moment of madness and Jorginho’s calm response.

But in the dying moments, man of the match Casemiro deservedly found the equaliser.

And somewhere in the North-West, a certain 37-year-old may have allowed himself a wry smile. 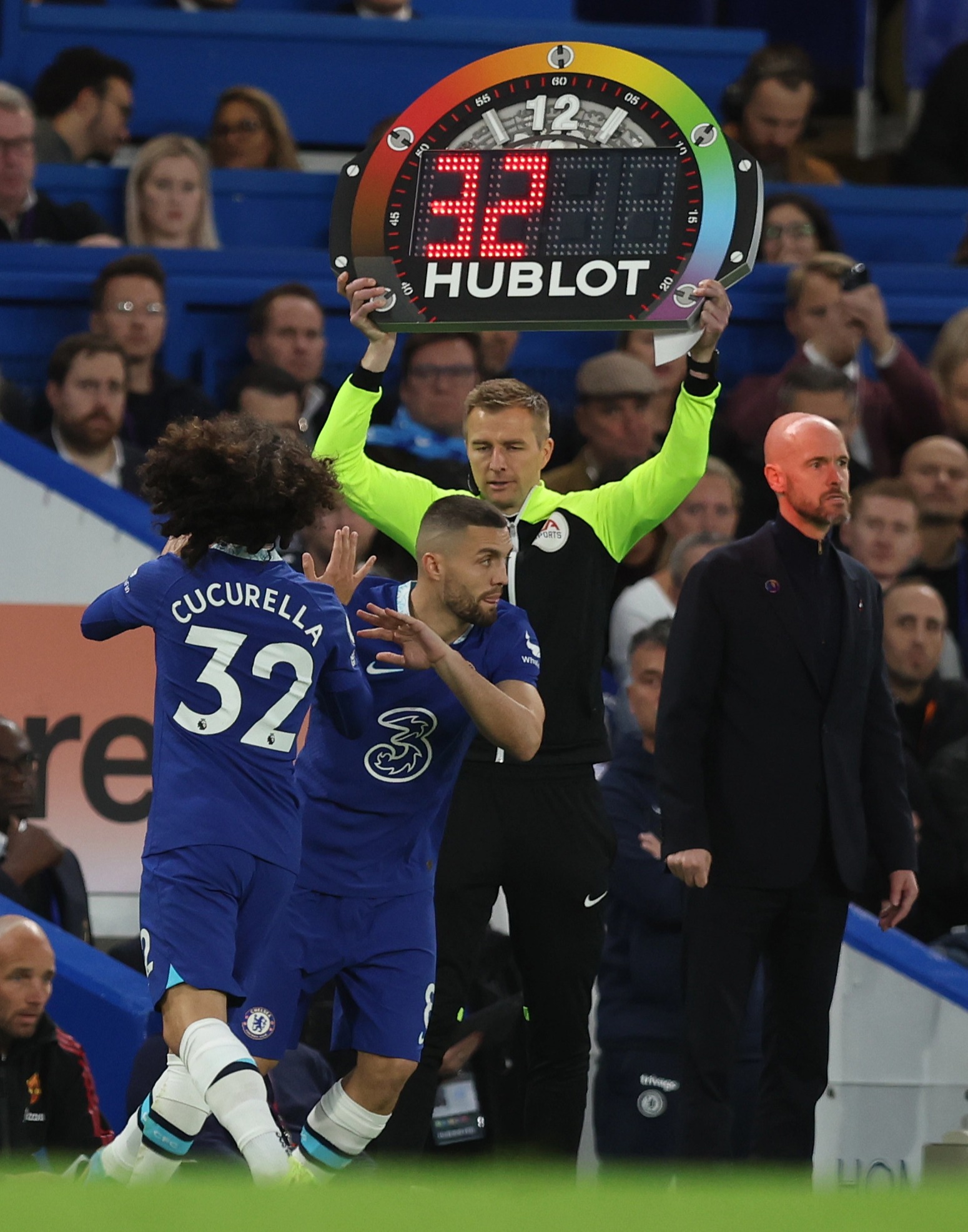 Marc Cucurella was hooked off after just 35 minutes to change the shapeCredit: Richard Pelham / The Sun 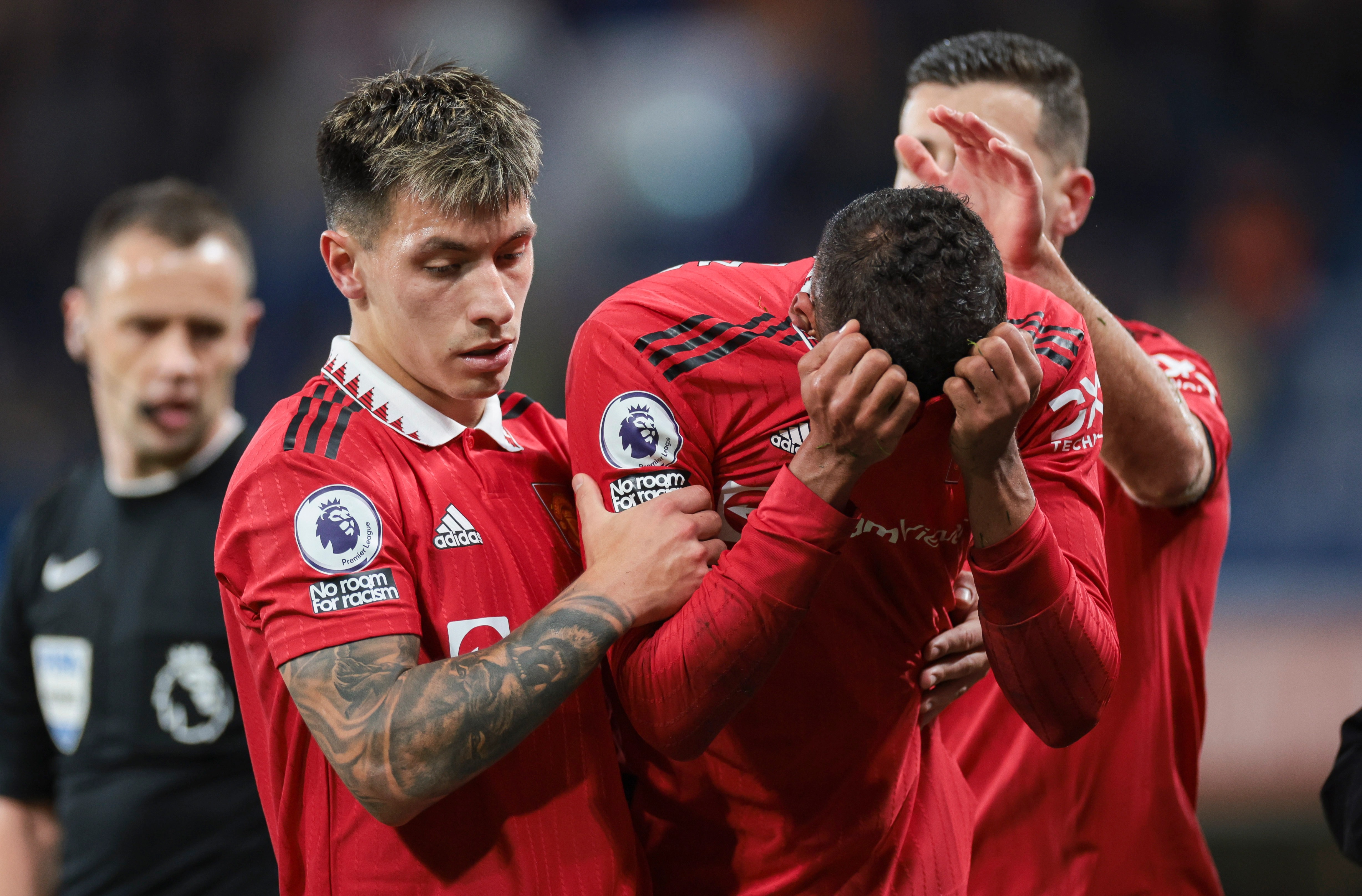 Raphael Varane was in tears after suffering his knee injuryCredit: Richard Pelham / The Sun 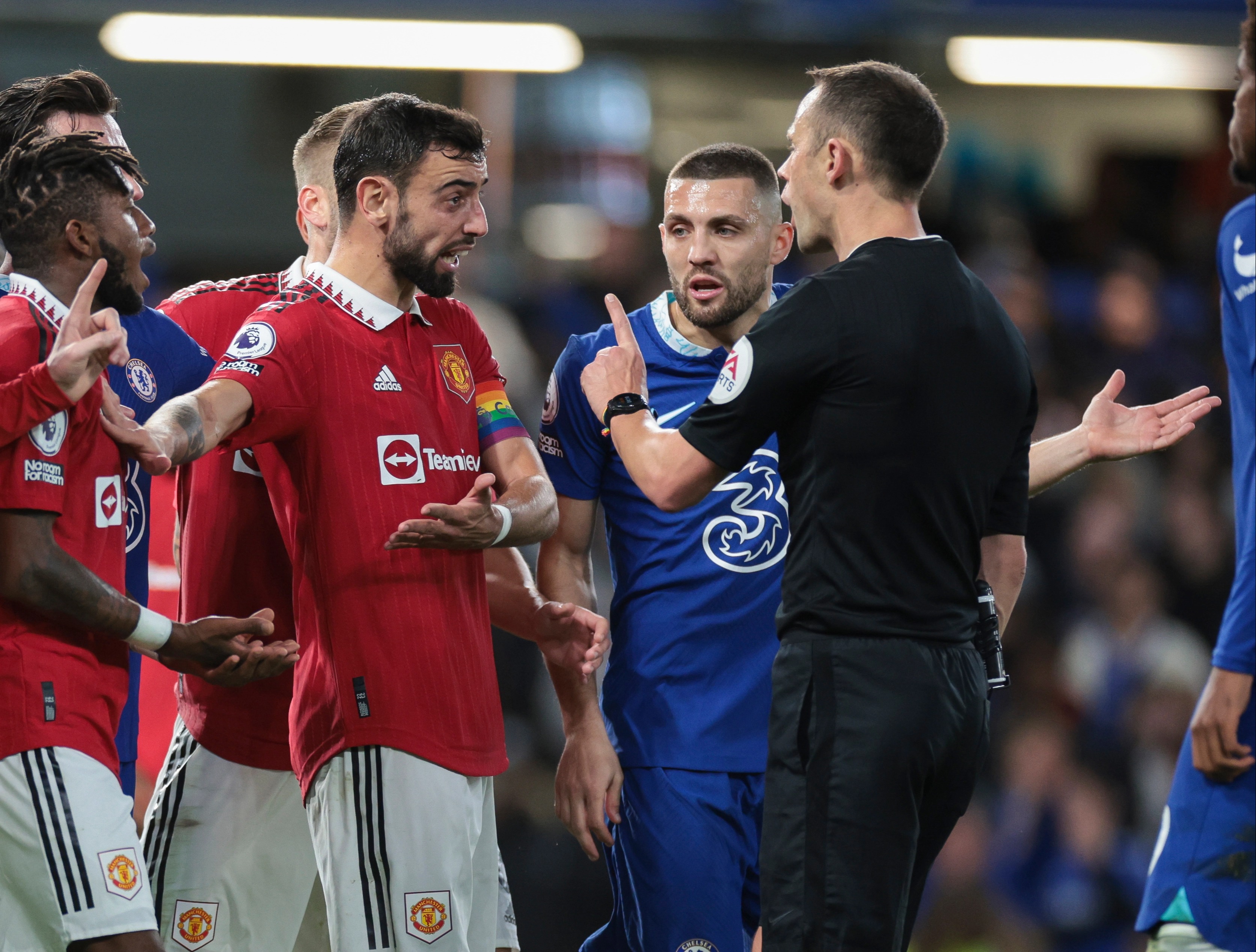 Bruno Fernandes complained about the penalty then admitted he didn’t see itCredit: Richard Pelham / The Sun

The Masked Dancer: Onomatopoeia revealed to be Adam Garcia