DANNY INGS may not be in England’s plans for the World Cup but he is certainly going to play a huge role in Unai Emery’s Aston Villa revival if he keeps this up. 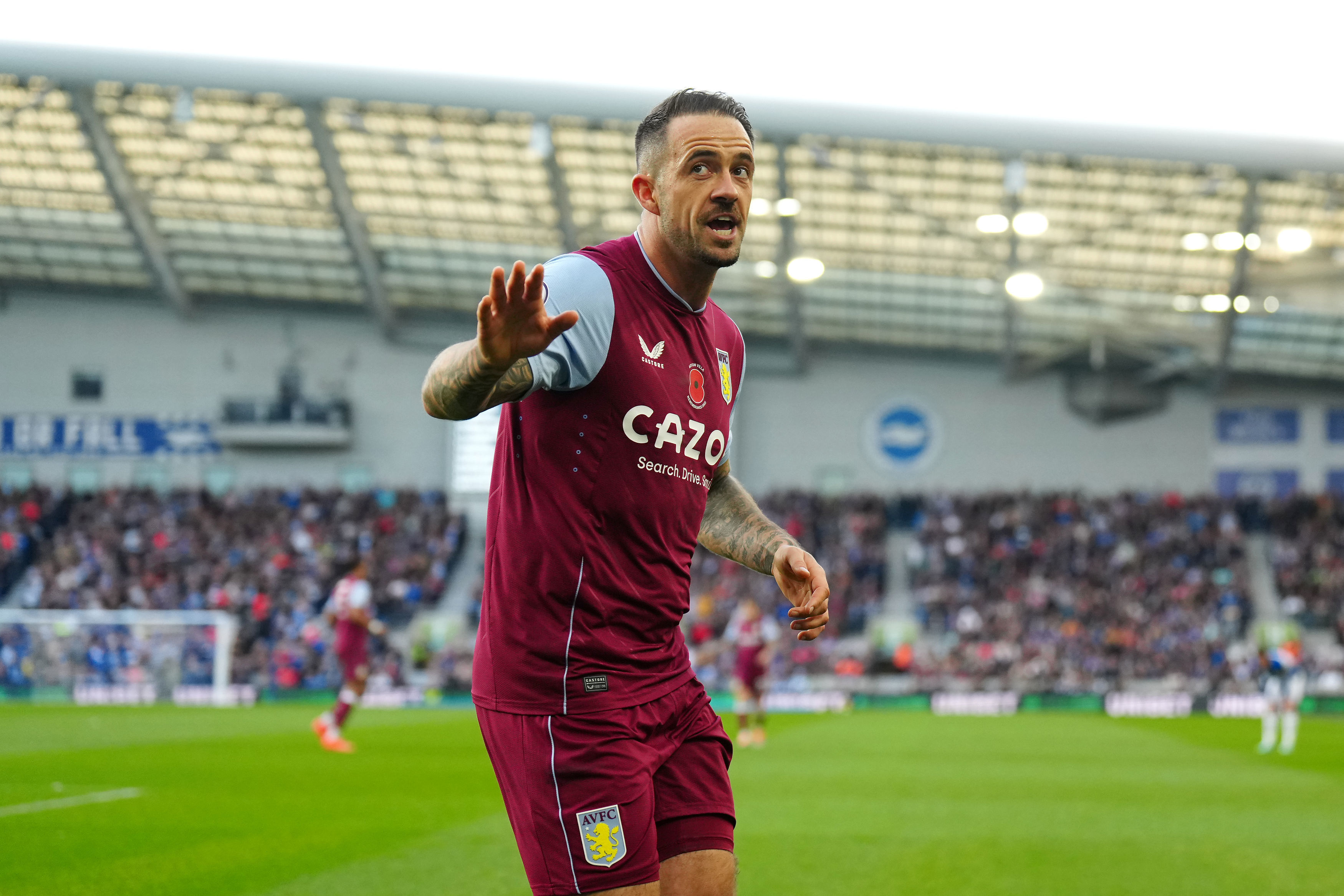 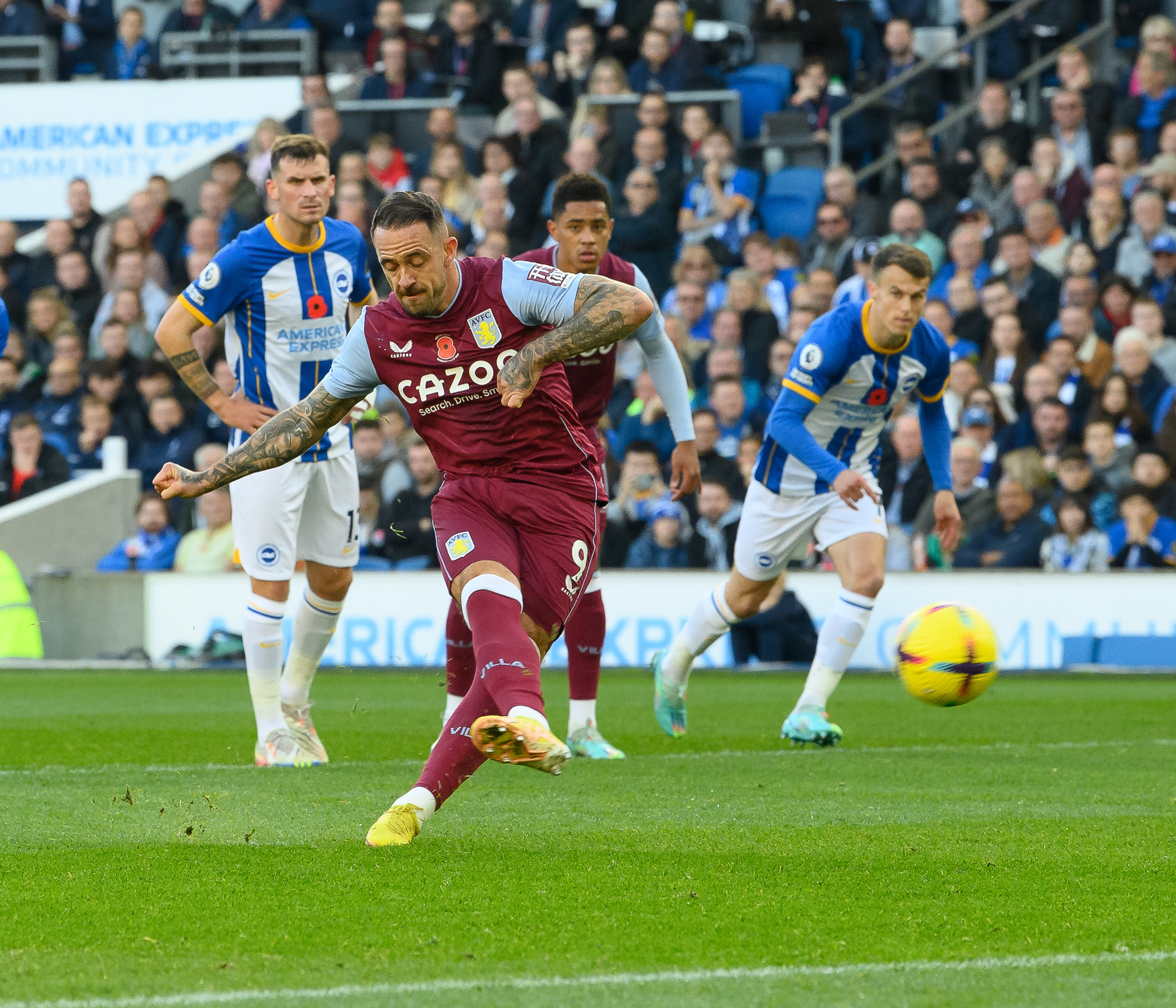 Ings scored his first from the spotCredit: Getty 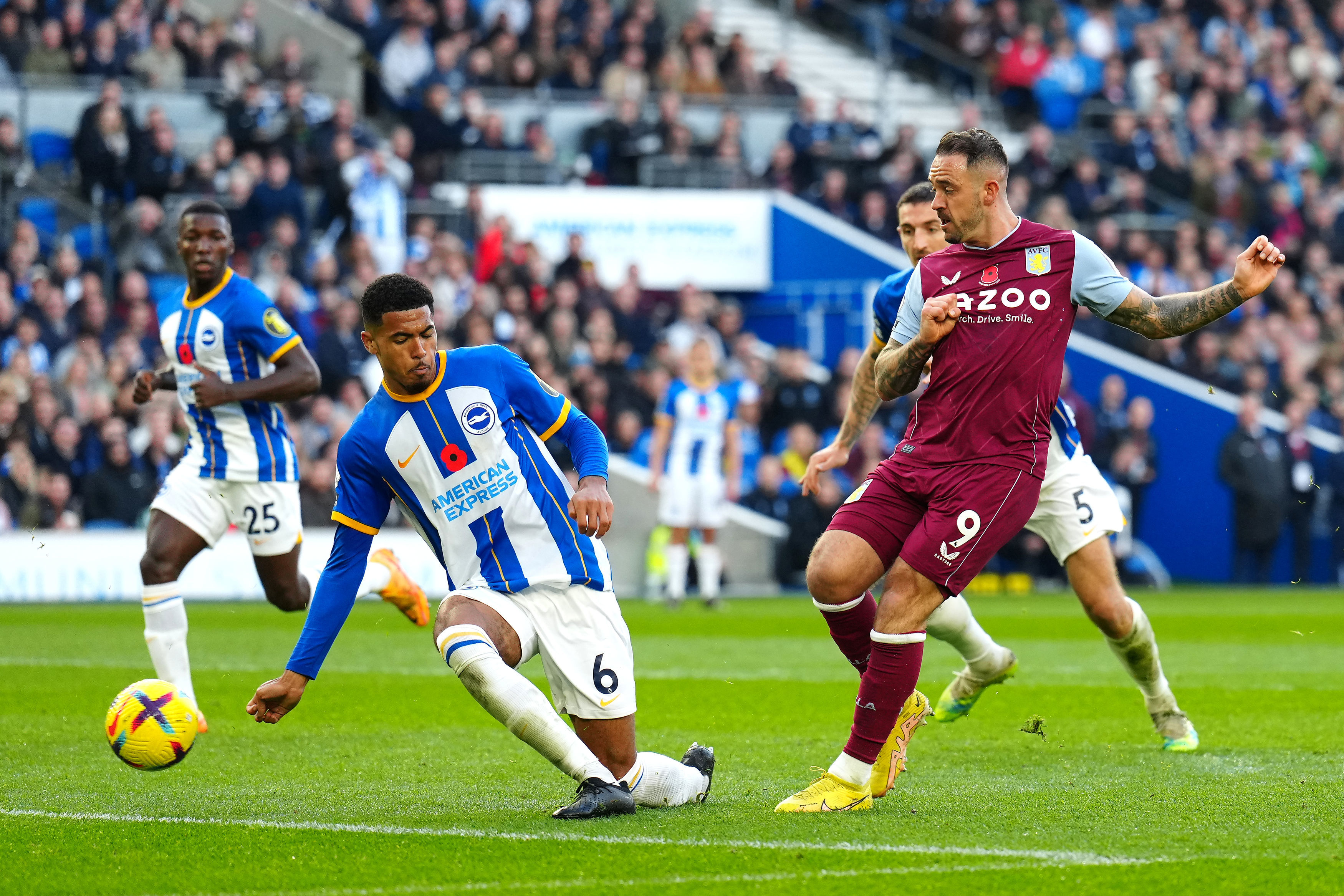 The striker’s second came via a deflection off Levi ColwillCredit: PA

Ings struck either side of half time, first from the penalty spot before his well worked winner, after Alexis Mac Allister had given the Seagulls the lead after just 49 seconds thanks to a mistake from Argentina team-mate, Emiliano Martinez.

Roberto De Zerbi’s side went into their final game before the break looking for a third consecutive win to ensure they spent Christmas safely in the top six.

And they made the best start possible thanks to Mac Allister.

Brighton’s own Argentine No10, who will be lining up alongside Lionel Messi in just over a week, set the tone from the off – muscling Douglas Luiz off the ball as he tried to receive a dodgy ball from goalkeeper Martinez.

Luiz was barged aside surprisingly easily, before Mac Allister bent his fifth Prem goal of the season past his embarrassed international teammate.

Emery stalked up and down the touchline waiting for his side to wake up and start posing questions.

After an unconvincing start, the visitors responded well.

Ings, back in the Premier League side having been dropped for Emery’s first game in charge, raced down the left and crossed for John McGinn to tap in – only for Pervis Estupinan to nab the ball from the toes of the Villa captain with an inspired bit of defending.

Moments later, though, McGinn was causing problems again and the defending was far more questionable this time.

Emiliano Buendia played a low ball through for the Scotland international who was cut down in the box by a lunging Lewis Dunk.

After Lucas Dinge had picked up the ball and stood by the spot to take the flak from opposing fans and players, Ings stepped in to take the penalty.

The former Liverpool striker crashed his fourth Prem goal of the season down the middle before signalling to the Brighton fans behind the goal to pipe down.

They weren’t kept quiet for long, however, with the hosts quickly getting on the front foot again after the leveller and almost taking the lead back in bizarre fashion.

Martinez had to be sharp to get down and prevent a Pascal Gross corner from sneaking in at the near post. 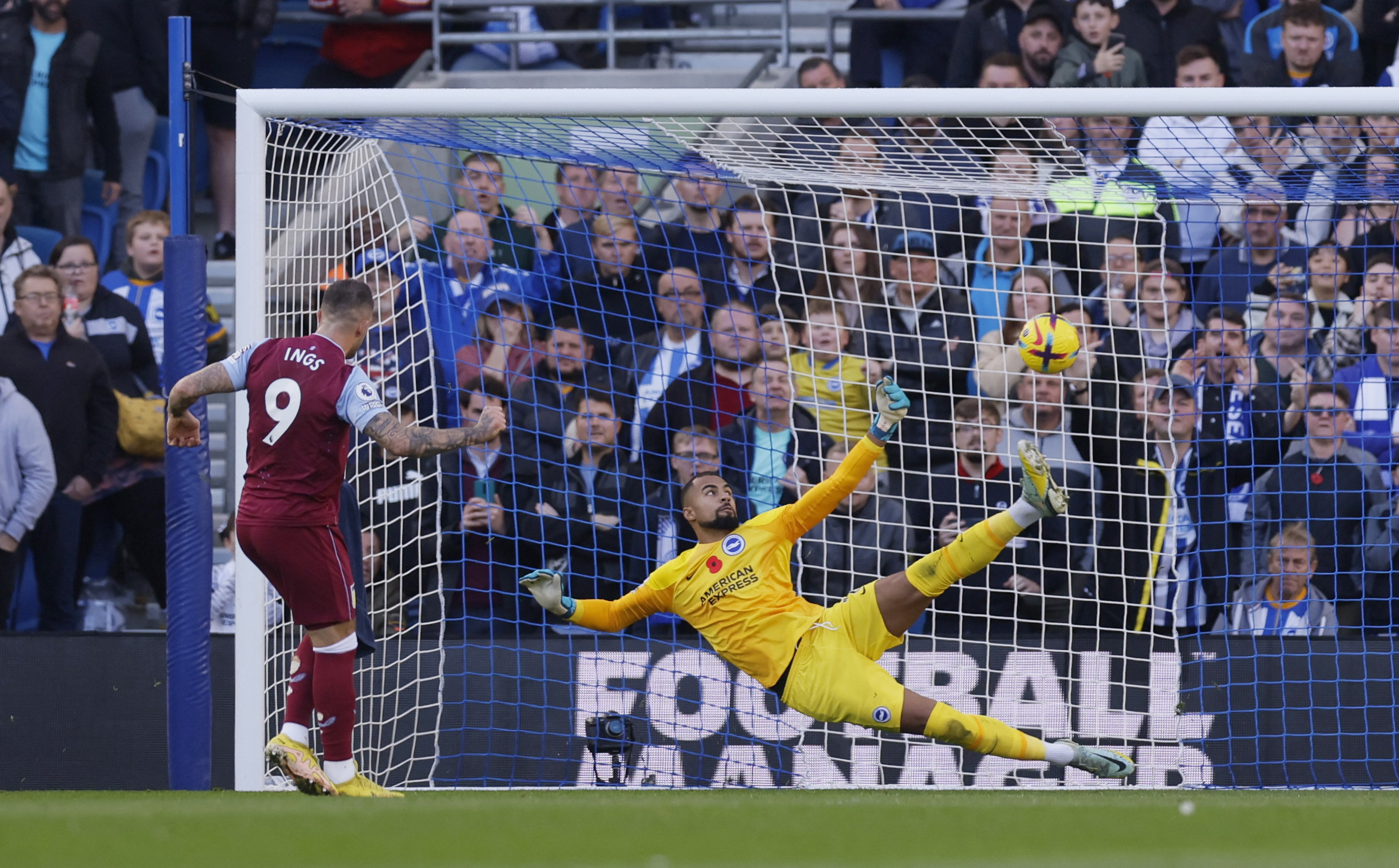 Ings’ penalty was his fourth Prem goal of the seasonCredit: Reuters

The former Arsenal keeper was working hard to make up for his early blunder.

After collecting the ball from a Brighton attack he quickly sent Ings racing away down the left behind the Seagulls back four, only for Dunk to get back in and block Jacob Ramsey’s effort following the striker’s cross.

Ings was at the heart of Villa’s fast start after the break too.

After Buendia saw his header hit the outside of the post, Luiz gave Mac Allister a taste of his own medicine.

The Brazilian midfielder crashed into the back of Mac Allister on the edge of the Brighton box, winning the ball high up before quickly finding Ings.

Villa’s No9 left Dunk in the mud with a clever turn before poking his second in through the legs of Levi Colwill.

Colwill, making his first ever Prem start, had been impressive at the back and, with the Seagulls behind, was now trying to get them going forward once again.

The Chelsea loanee slipped a fine ball through for Estupinan, whose fizzed cross was blocked by a sliding Tyrone Mings.

Brighton, who were missing the threat of Japan international Kaoru Mitoma – absent through illness, continued to push forward.

De Zerbi sent on Deniz Undav and the pacey Tariq Lamptey on to try and hurt the visitors. 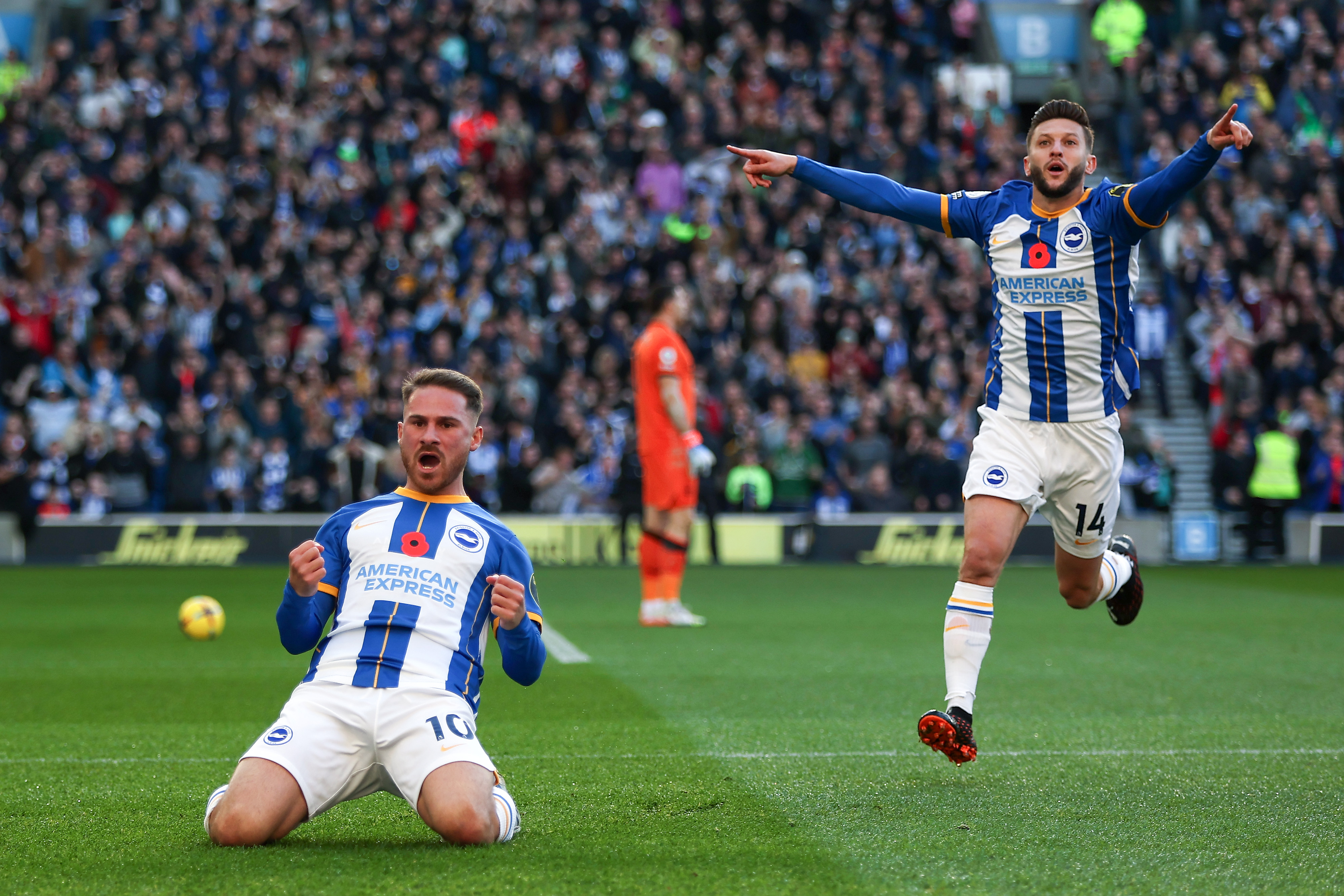 Alexis Mac Allister had initially given Brighton the leadCredit: Getty

But Villa dropped deep and put their bodies on the line at the back as Martinez did all he could to run the clock down.

The one time Brighton found space, Colwill could only head wide from Mac Allister’s cross.

Frustrations at Villa’s time wasting boiled over both on and off the pitch with De Zerbi and Gross both booked for their protests to ref, Chris Kavanagh.

Villa were collecting plenty of bookings of their own as they clipped and tripped their way through eight minutes added on.

But Emery and the travelling fans didn’t care a jot.

The ex-Arsenal boss has quickly shaken his side back to life and has six points from six to ensure Villa can spend their Christmas looking up rather than down.