THE REPUBLIC OF IRELAND were left humiliated after suffering a shock 1-0 defeat to minnows Luxembourg in Dublin. 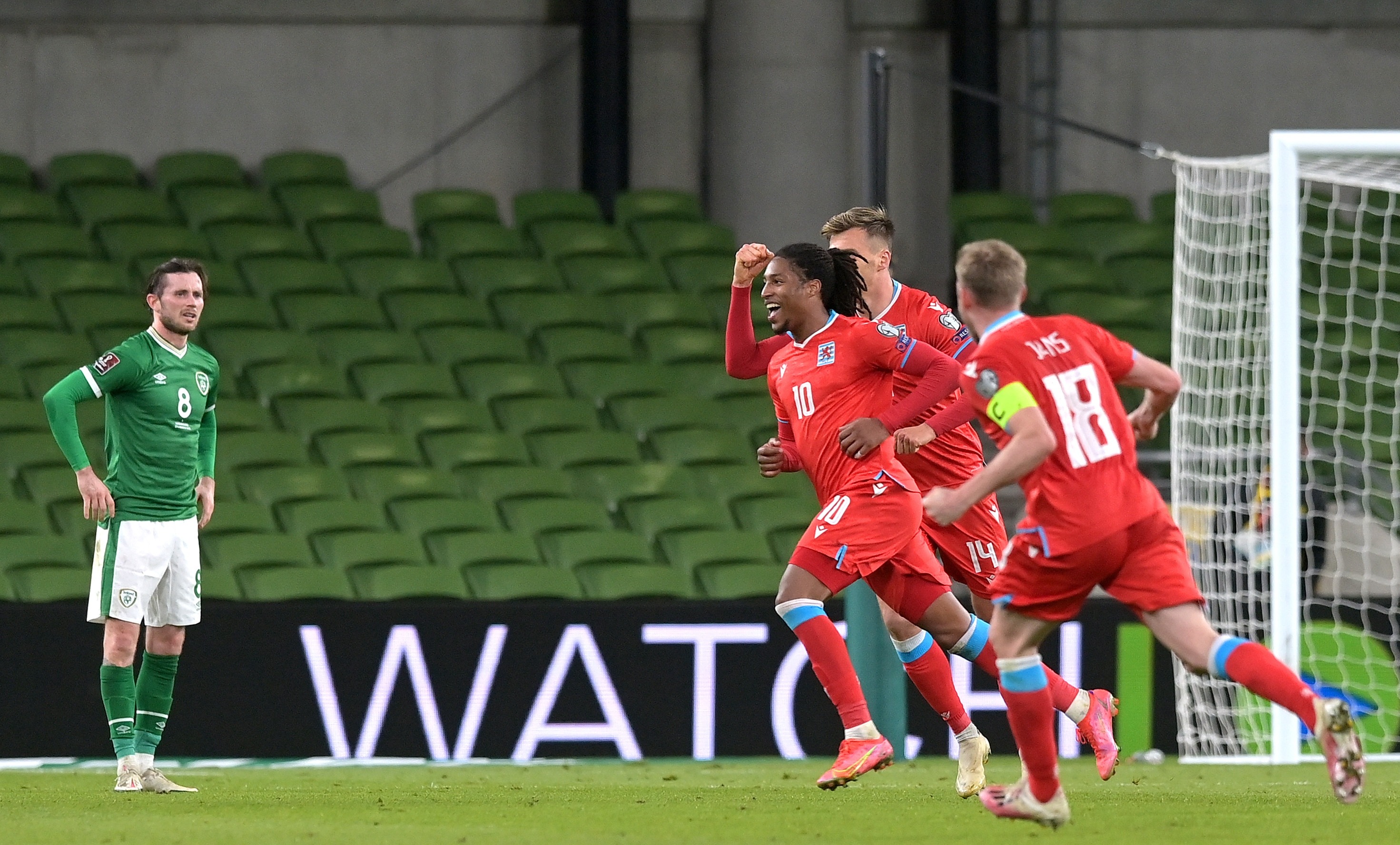 And it’s more misery for boss Stephen Kenny whose reign is now ten games with ZERO wins and six defeats.

He could point out that his previous nine games were all against decent teams who are either going to Euro 2020 or were in the play-offs.

But that cannot be said about Luxembourg – the 98th-ranked team in the world, 56 spots below Ireland.

Sure they have got good results lately and are not among the bottom seeds.

But they were the lowest ranked of the fourth seeds, and the good results were draws three years ago with France and Bulgaria.

The wins more recently were against Cyprus, Montenegro and Azerbaijan. Now Ireland are added to the list.

Ireland’s next qualifier is away in Portugal on September 1 and the Boys in Green could conceivably have no points from three games.

It will then be about building for the Euro 2024 qualifiers, and who is the right man for that long-term project. 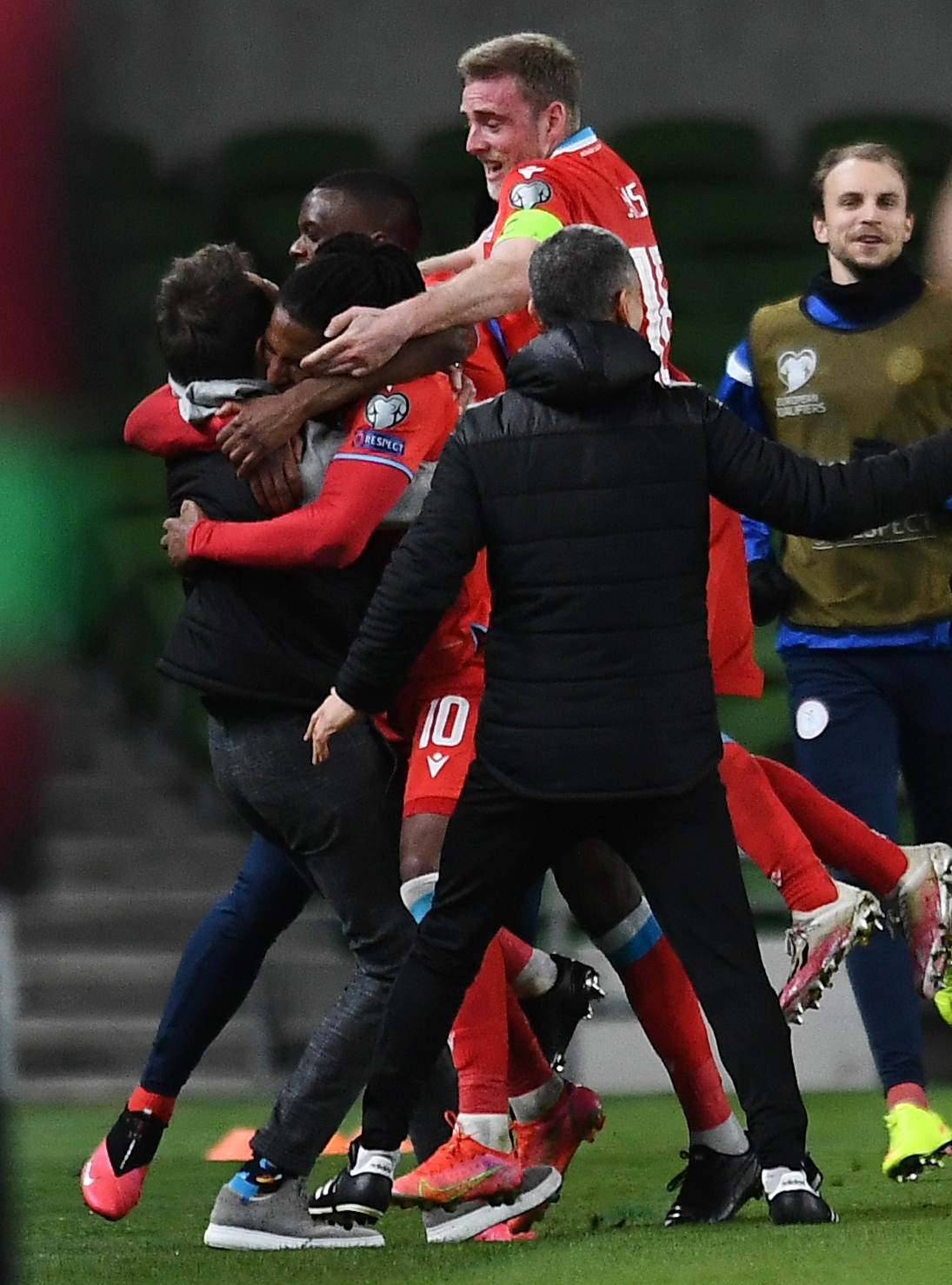 Luxembourg celebrate a rare victory away from homeCredit: Reuters 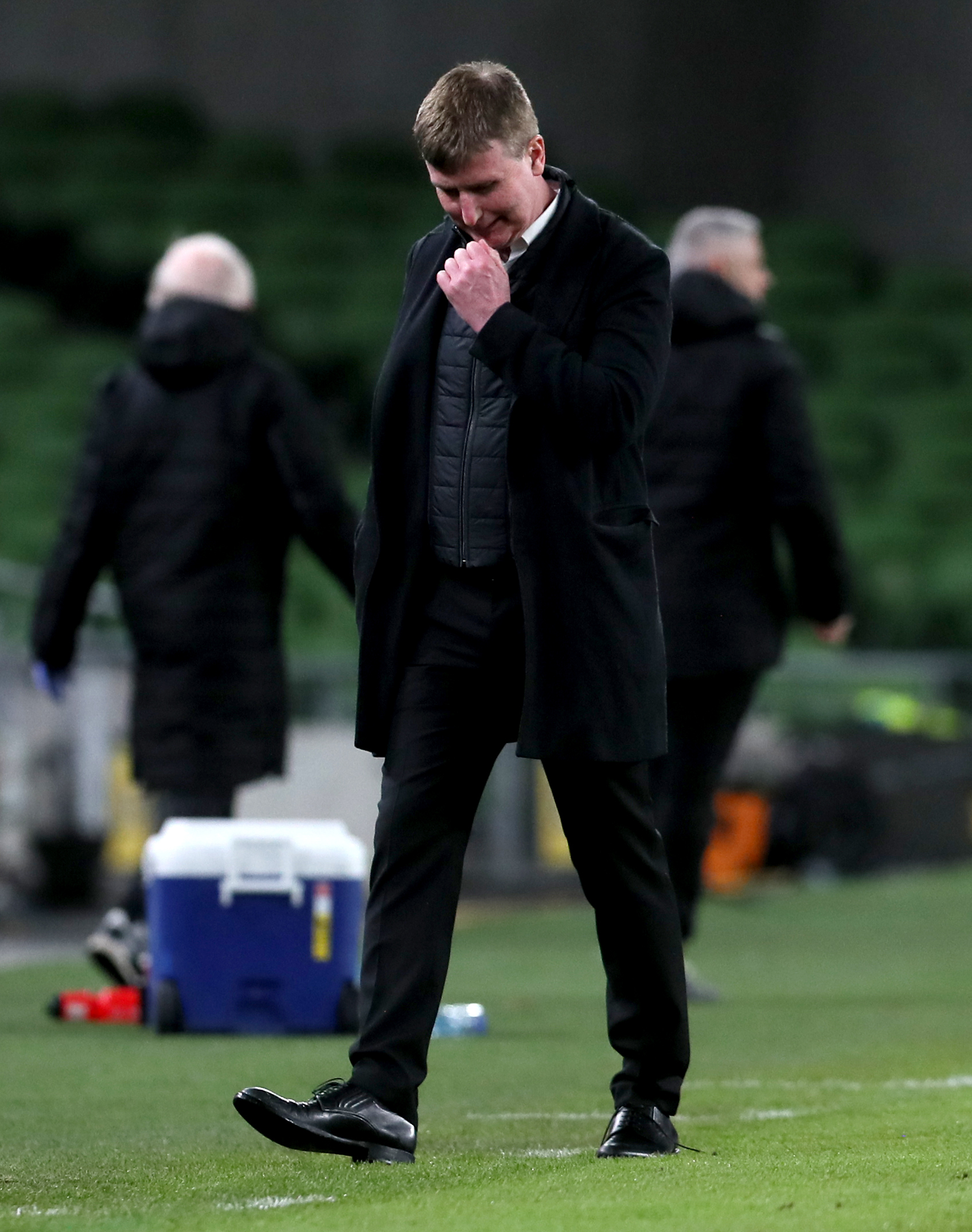 Stephen Kenny looks on dejected after yet another defeat – his sixth in ten gamesCredit: PA

There is a school of thought that this campaign should be about team building anyway given short-termism has meant no World Cups since 2002.

But Kenny’s contract is up at the end of this campaign and any extension will be based on progress.

If Wednesday’s 3-2 loss in Serbia was a one step forward, Luxembourg was ten steps back.

Whether Luxembourg made Ireland look ordinary, or Ireland made Luxembourg look good, this was two bad teams who would strike fear into no one.

Luxembourg actually had the better chances in the game with debut goalkeeper Gavin Bazunu making a couple of important saves.

But there was nothing he could do four minutes from time when Rodrigues’ grabbed a goal out of nothing.

It started with a nothing long put forward that Séamus Coleman poked clear as far as the Dynamo Kiev man, who evaded a challenge from Josh Cullen and belted the ball past Bazunu from 25-yards.

Luxembourg were in dreamland, but it just added to the nightmare that this game had already become for Ireland. 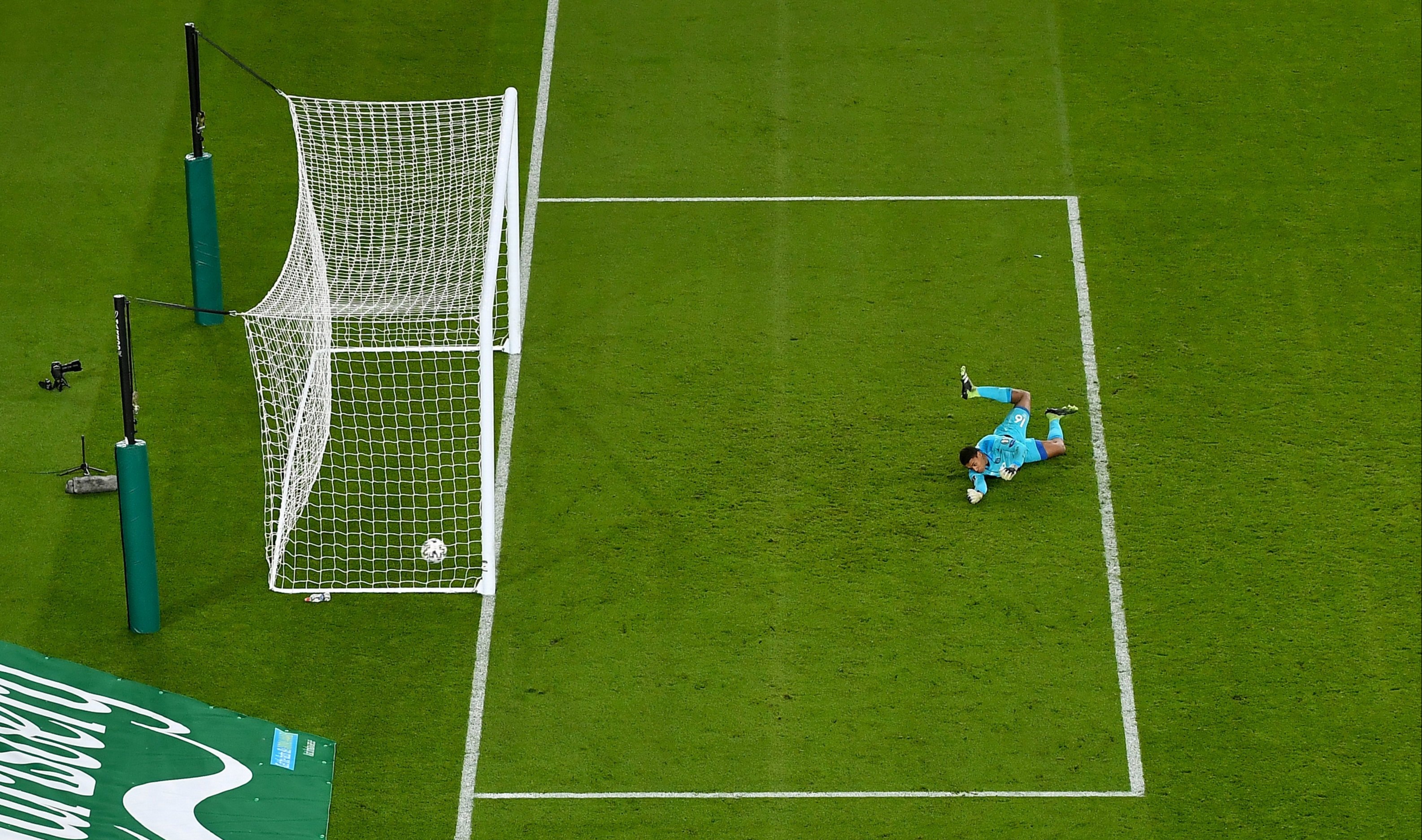 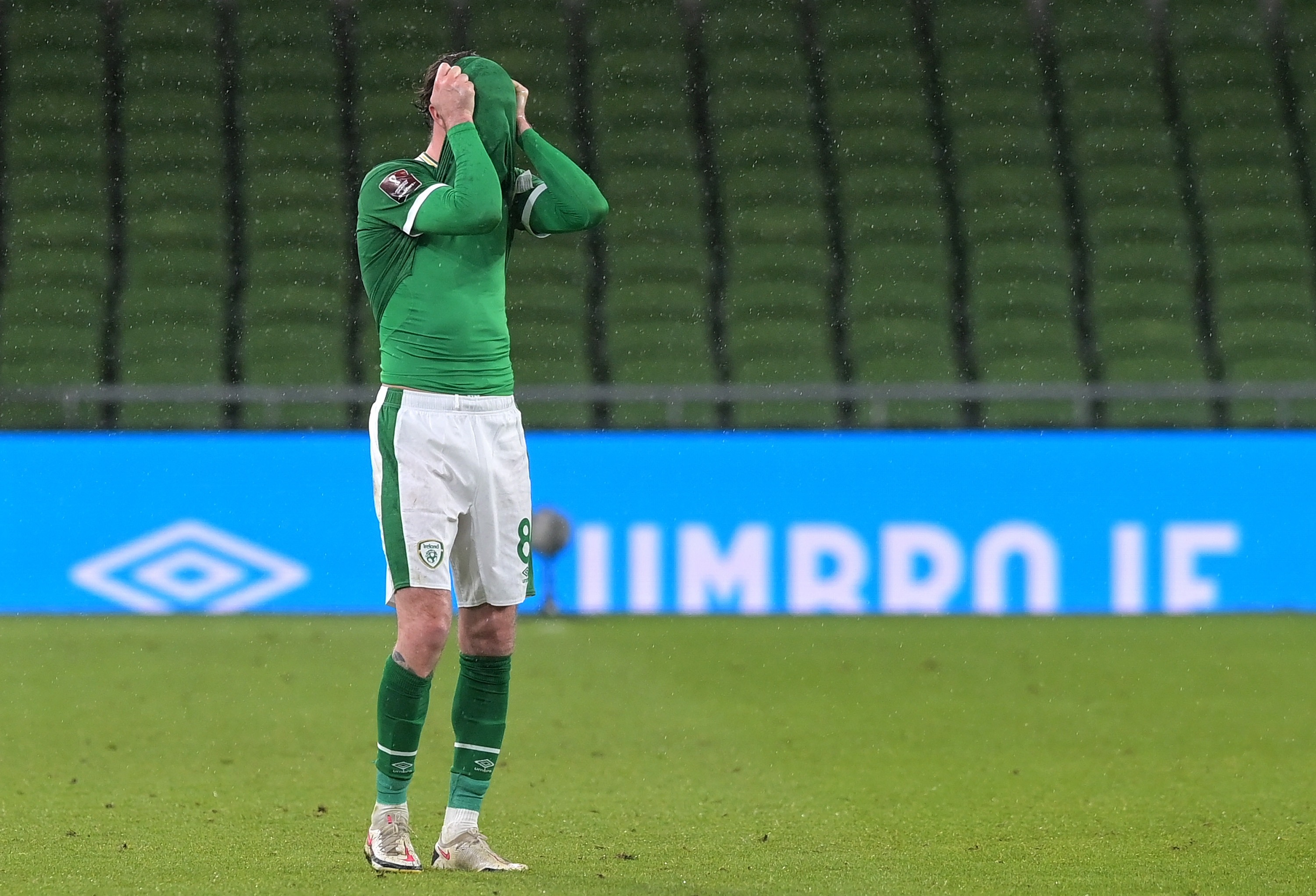 Alan Browne knows there’s no coming back from the shock defeatCredit: Getty

Lethargic on the ball, the Boys in Green struggled to carve open Luxembourg.

James Collins had two good opportunities – an early close range effort well saved and then an acrobatic volley that was off target.

But there was little else for Ireland to get excited about over the course of the 90 minutes that seemed to be drifting towards a disaster for the home side as it went on.

A quick start was the plan. That wing backs Enda Stevens and Matt Doherty lined up on the halfway line for kick-off made it clear they wanted to be on the front foot.

But Luxembourg are a team that likes to have a go – from anywhere. Stats from previous games highlighted that the visitors shoot on sight and Bazunu learnt that early on.

Winger Vincent Thill forced Bazunu to make his first save in international football with a shot straight at him after 90 minutes and then blazed wide one minute later.

It was an early warning that the fourth seeds were not going to be a pushover, and Ireland needed to be patient.

But the visitors were doing a good job and Ireland looked as ordinary as they have in many games in the last few years. 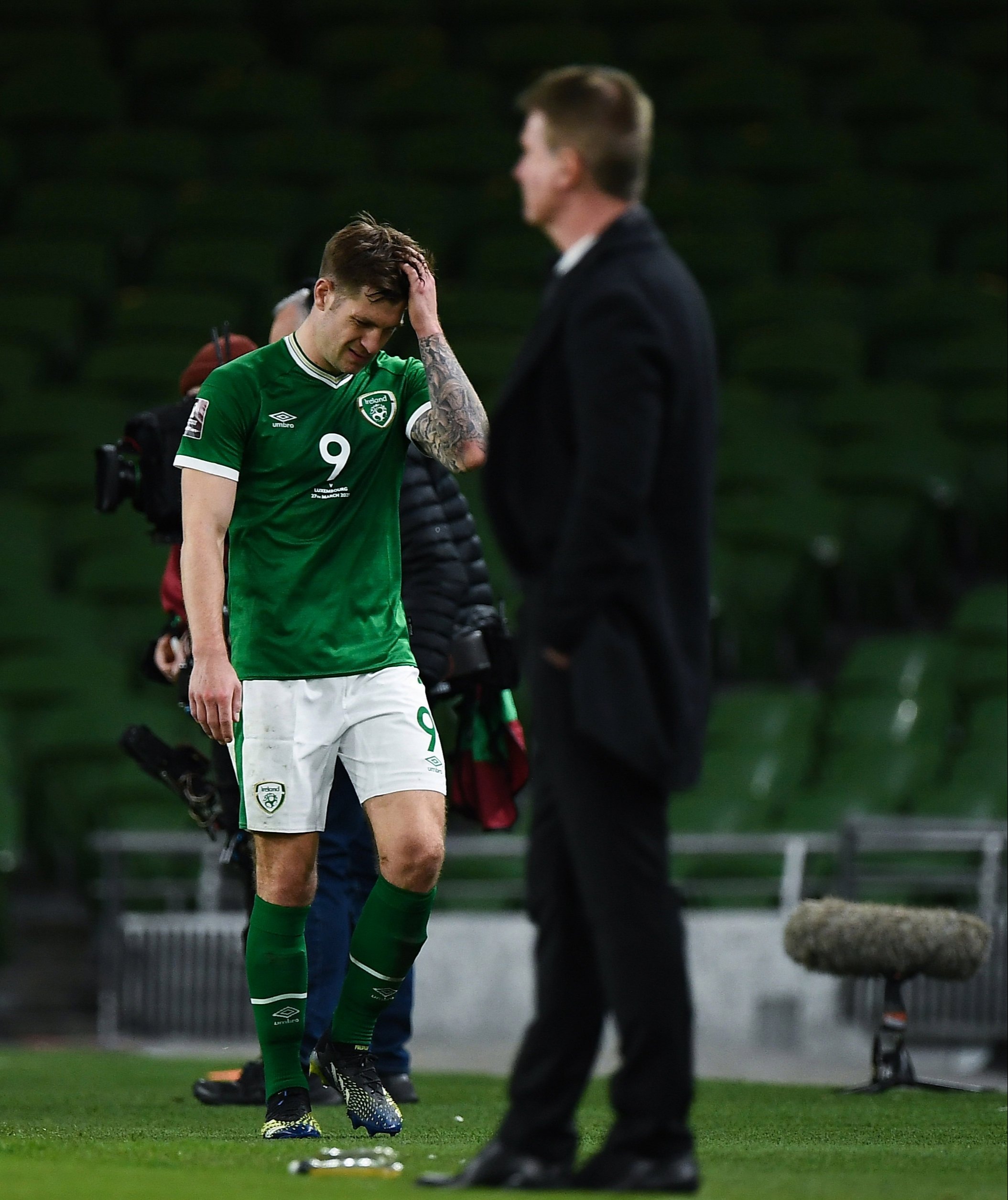 It was another disastrous day for Irish footballCredit: Sportsfile

Kenny’s men were nice and pretty in possession around the centre circle with Collins close range effort from Callum Robinson’s left wing cross their only chance.

Getting frustrated, they were turning over possession cheaply which left them at threat of a counter attack.

Rodrigues came close to opening the scoring on one as only the alert back peddling Bazunu denied the Ukraine-based star’s attempted lob.

It was Ireland in need of half-time to regroup and put things right as Collins was easily handled by the Luxembourgers, though he could question the quality of the services.

Set-pieces were particularly poor as Ireland wasted plenty of them, with Robbie Brady brought on for the injured Matt Doherty at half time.

Straight away, the dead ball expert almost delivered. His pinpoint delivery picked out an unmarked Alan Browne who could not believe he headed wide of the target.

But Luxembourg were also still causing problems and Oliver Thill had Bazunu scrambling across his goal as he flashed a free kick wide.

Just after the hour, Bazunu was called into action again when the other Thill brother Vincent carved a chance for himself as he burst through the Ireland cover.

But Collins then went close with an overhead kick from a Brady cross moments later as Ireland kept looking for something, anything, to go right.

Yet the chances were not coming and it was getting increasingly desperate as Robinson blazed over and Jason Knight had a shot blocked.

When the goal came, it went Luxembourg’s way. The worst bit was it did not feel like a surprise.

Friends have shaped who we are today