Bournemouth 3 Everton 0: Humiliation for Frank Lampard as Toffees are smashed and drop towards Prem relegation zone 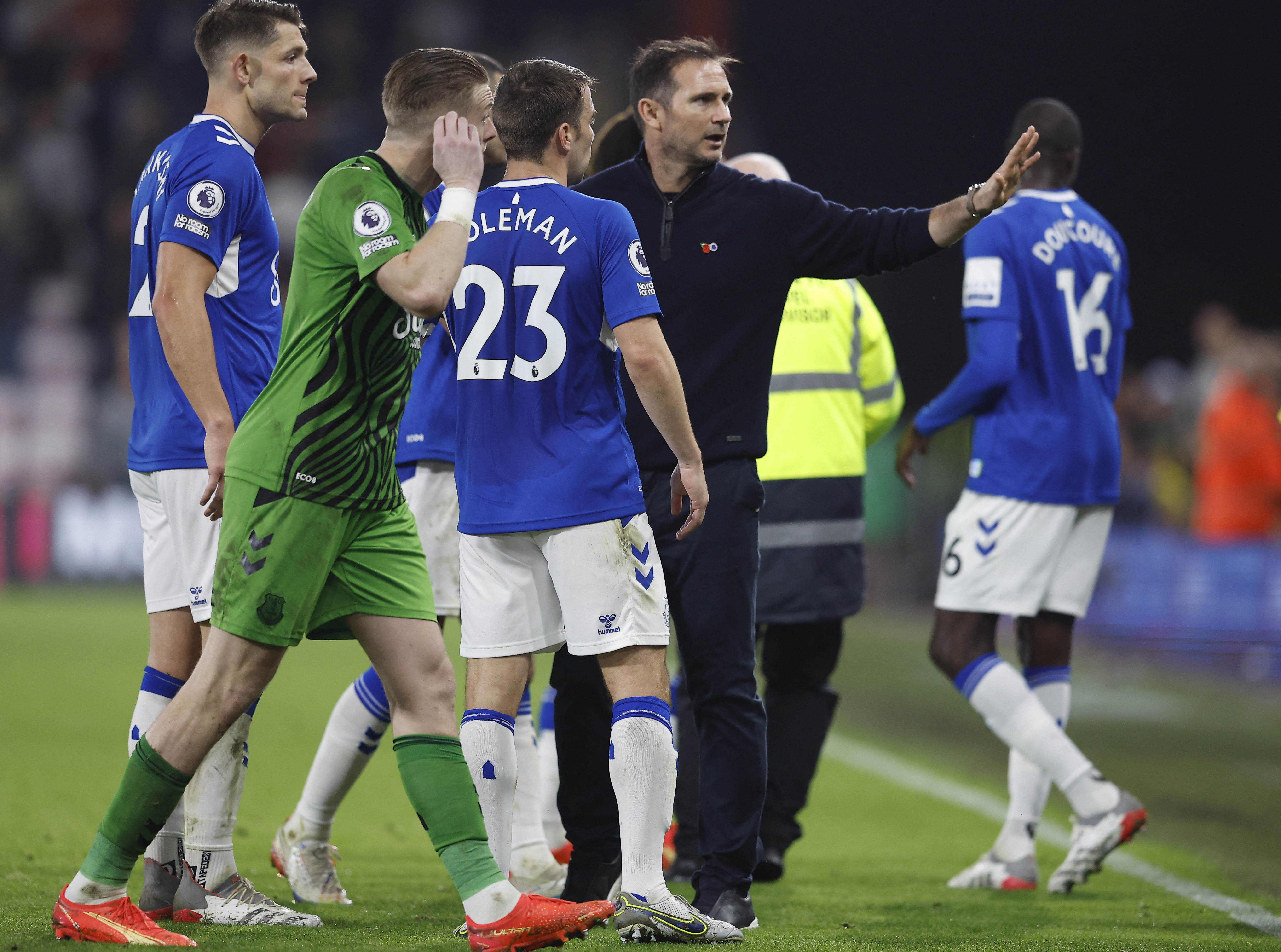 Everton suffered a 3-0 defeat at Bournemouth to leave them hovering above the drop zoneCredit: Reuters 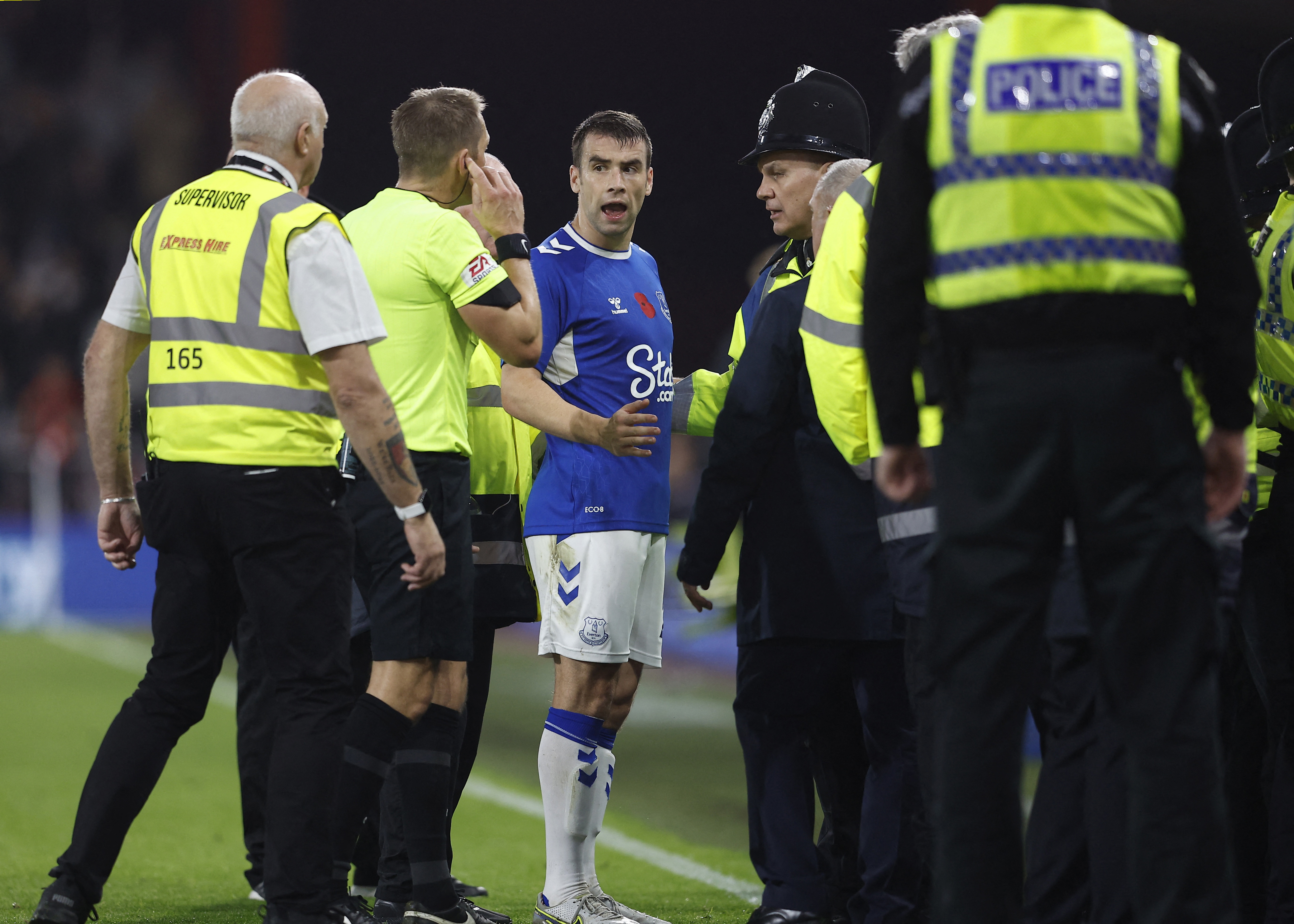 There were ugly scenes at the final whistle as Everton fans jeered their own playersCredit: Reuters

Angry Lamps felt referee Craig Pawson should have halted play before the ball had hit the net but the official wasn’t having it.

Former Chelsea boss Lampard will now be feeling the heat on Merseyside having secured one win in eight games.

And Everton fans made their feelings known after the final whistle when they threw back the players’ shirts after being handed them by their crestfallen heroes. 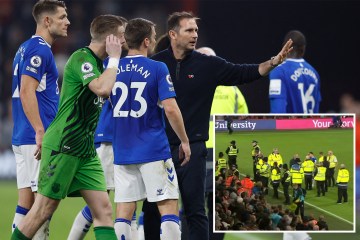 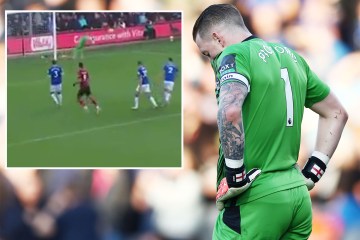 But tempers were at boiling point as the Toffees defence was unwrapped for the second time in four days following their second string’s 4-1 Carabao Cup defeat.

Lamps watched Jordan Pickford gift the Cherries the lead with an 18th minute howler in his last game before joining up with Three Lions.

Pickford could have caught Dominic Solanke’s powder puff curler but he flapped the ball onto the ground and Marcus Tavernier tapped home his second goal for the club.

Dwight McNeil summed up the feeling in the Everton camp by pulling his shirt over his head in anger and frustration.

Both Lampard and his opposite number Gary O’Neil walked away from the Vitality Stadium with serious doubts over their long-term futures.

Lampard’s Goodison Park job is on the line with the Toffees facing a relegation dog-fight after winning just one of their last eight games.

And Cherries interim manager O’Neil left the ground knowing that former Leeds manager Marcelo Bielsa’s name was being touted for the job.

O’Neil’s worked on a game-by-game basis since Scott Parker’s sacking but now faces an agonising wait to see if he has secure the number 1 role full-time despite taking 13 points from 11 games. 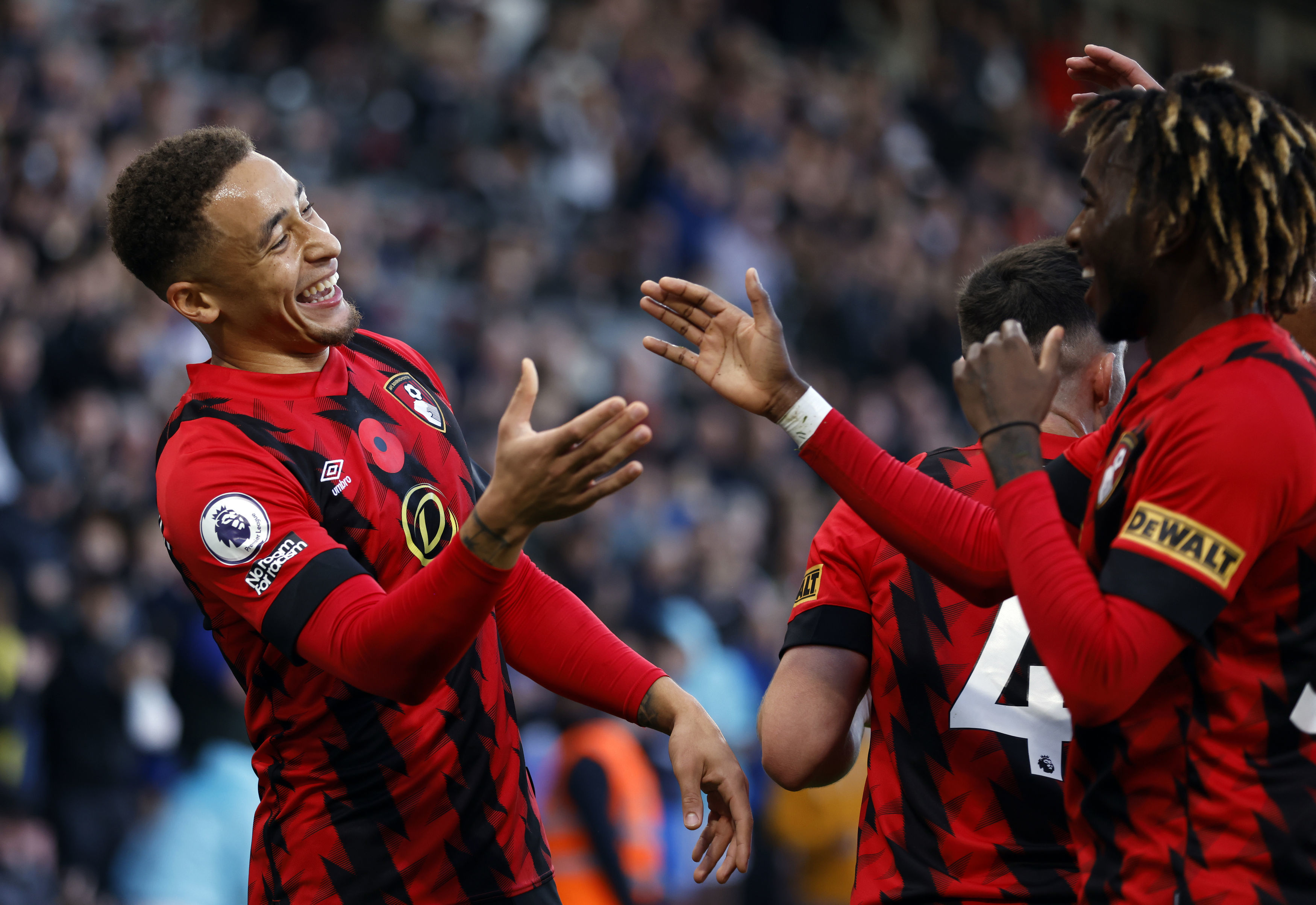 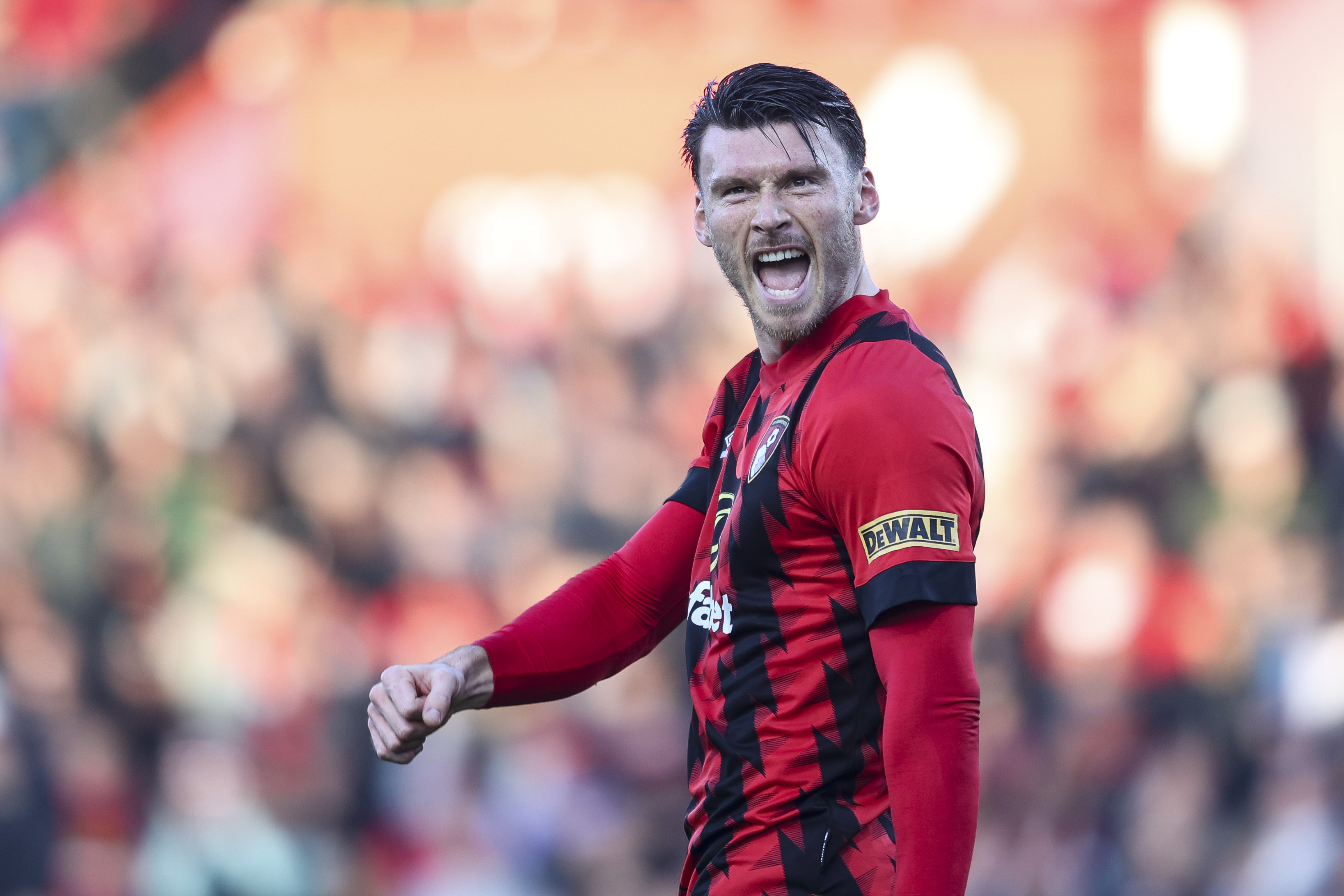 The World Cup break will give both boards time to think over their options before Premier League action returns on Boxing Day.

Lamps made two changes from the reserve side that feebly went down in the League Cup on Tuesday but his first teamers hardly inspired the travelling Everton fans.

They did threaten first when Amadeus Onana’s shot rebounded off Demarai Gray to Neal Maupay whose shot on the turn flew over the bar.

But Pickford was soon suffering taunts from the home fans who chanted “England’s number 3” following the stopper’s error. 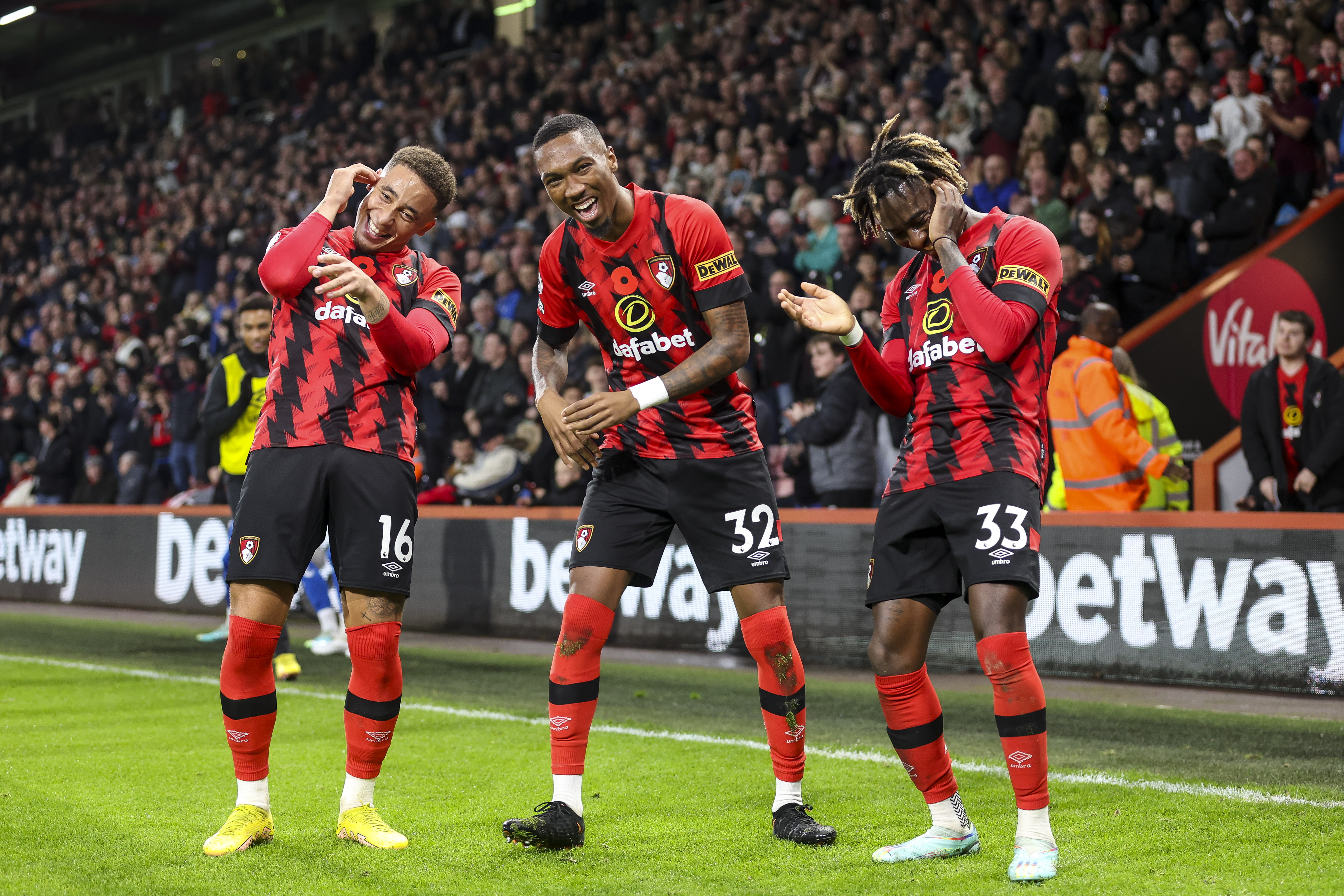 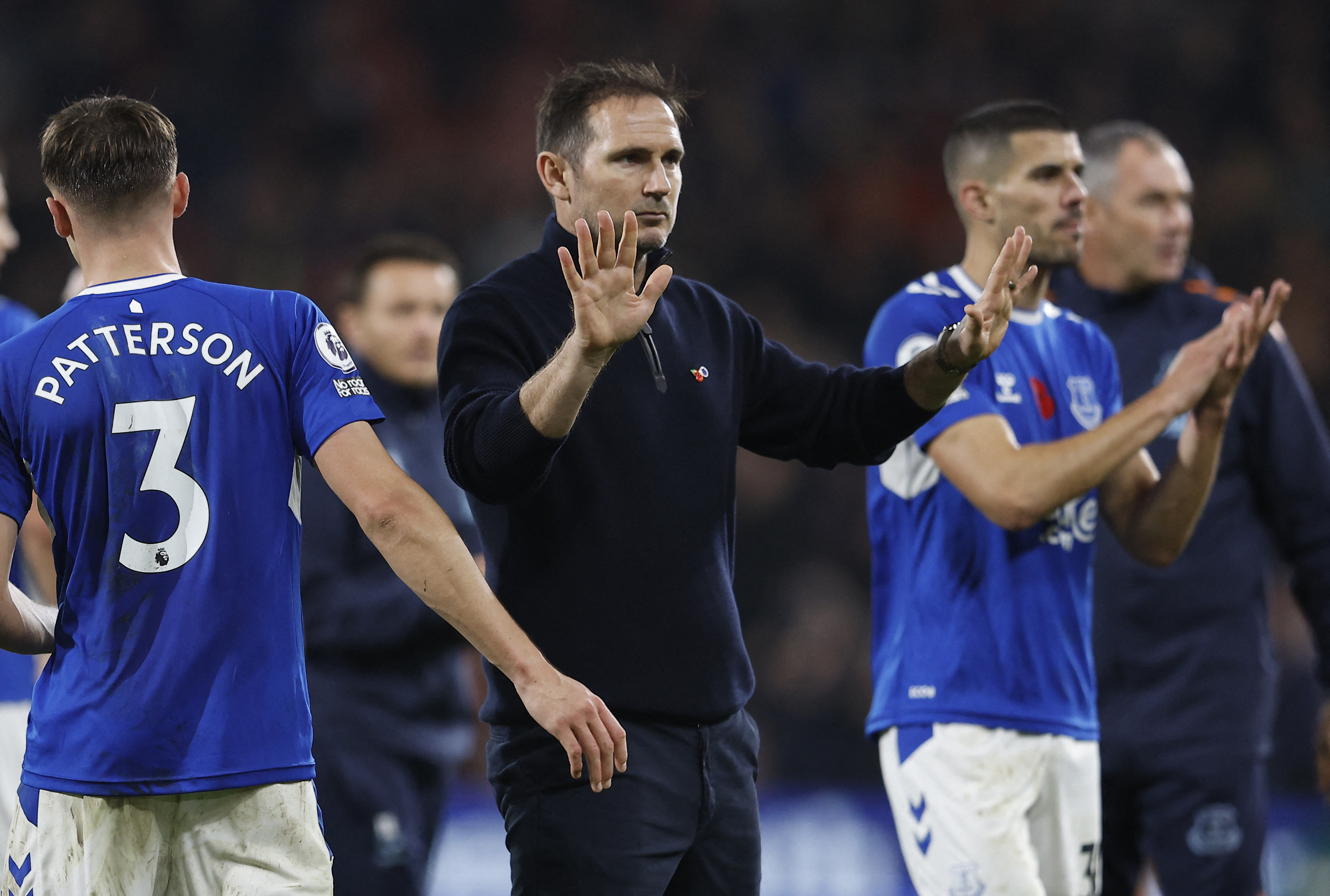 And Pickford was picking the ball out of the net again on 25 minutes after he had done well to push away Philip Billing’s shot.

Moore headed home Tavernier’s cross and although Tarkowski continued after treatment Vitalii MyKolenski, who hurt his shoulder as the Wales striker netted, was replaced by Seamus Coleman.

Tempers began to fray and VAR took a look at Lewis Cook’s lunging tackle on Onana for a sending off offence but no action was taken.

The Cherries are no doubt playing for their interim boss and Pickford was forced to make a full-length save to turn away Tavernier’s effort.

Moore, who will face Pickford again in the World Cup in 16 days’ time, was given a standing ovation on 67 minutes when he was replaced by Jaidon Anthony.

And within two minutes Lampard was left staring blankly into space when Anthony headed home a third goal from Cook’s free-kick.

Delighted home supporters called for a wave from O’Neil before telling Lamps “You’re getting sacked in the morning.”

Catch up on all the action with our live blog below…

West Ham 0 Leicester 2: David Moyes under huge pressure amid calls for him to be sacked as Maddison goes off injured