STEVE COTTERILL will have been grateful just to be able to watch this clash from his hospital bed.

But the fact that his Shrewsbury side ran Premier League Southampton so close will surely have filled the poorly ex-Portsmouth chief with pride. 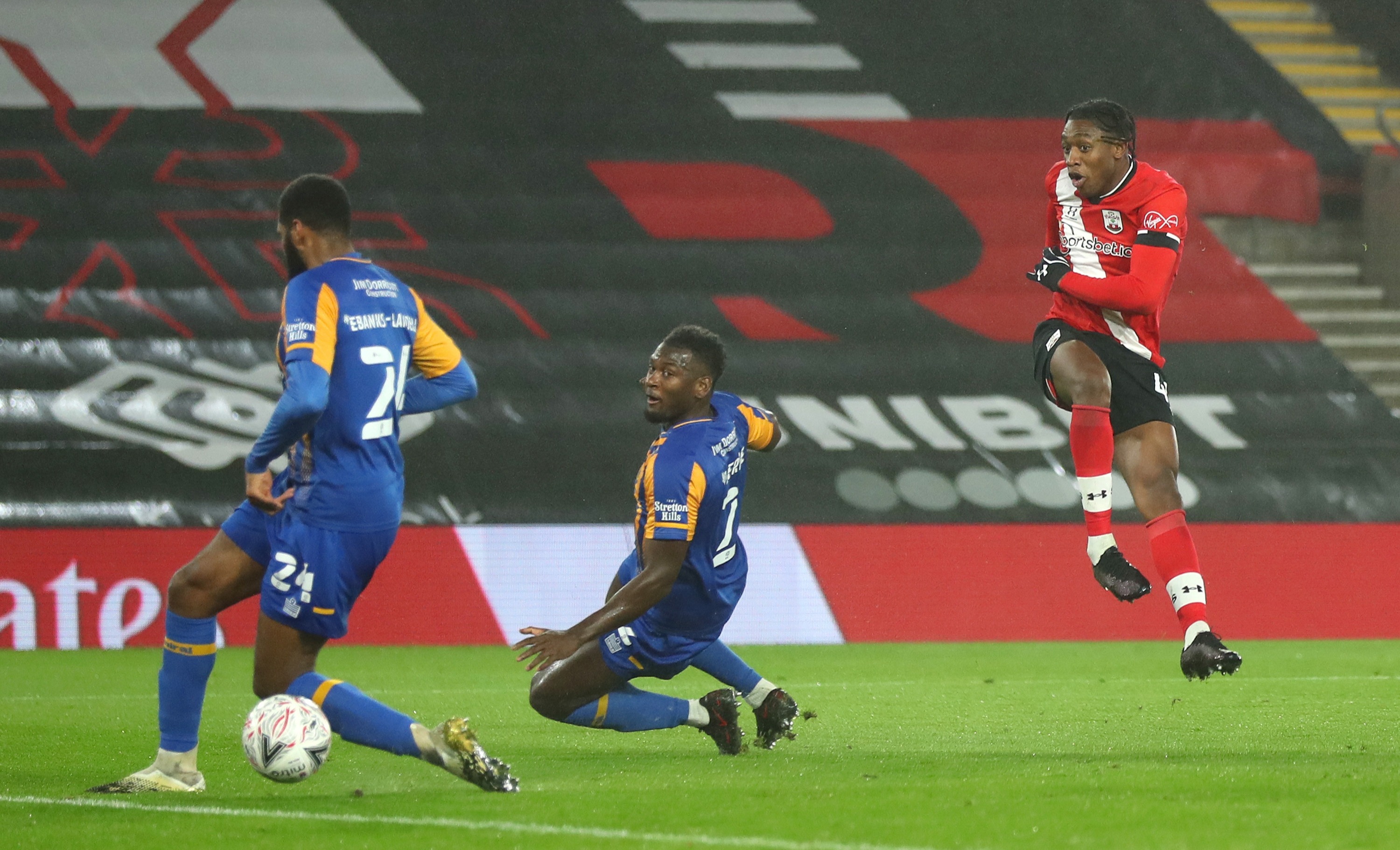 Cotterill, 56, was rushed into intensive care on Friday and spent the weekend on oxygen, fighting for his life with Coronavirus.

Thankfully, his No2 Aaron Wilbraham revealed he was well enough to take this cup tie on the telly.

If he did tune in, no doubt Cotterill will have been cursing the screen at his side’s defending as whizkid Dan N’Lundulu netted an early matchwinner.

There was little his side could do when James Ward-Prowse killed the game off with a trademark free-kick on 89 minutes.

But overall he will have been delighted as Town put in a performance that belied the 52 spots between the two clubs in the English football pyramid.

In many ways, it was a victory in itself that Shrews managed to get this game on at all.

Cotterill’s ordeal was one of TWENTY Covid cases suffered by the League One club, which caused the original third-round tie to be postponed earlier this month. 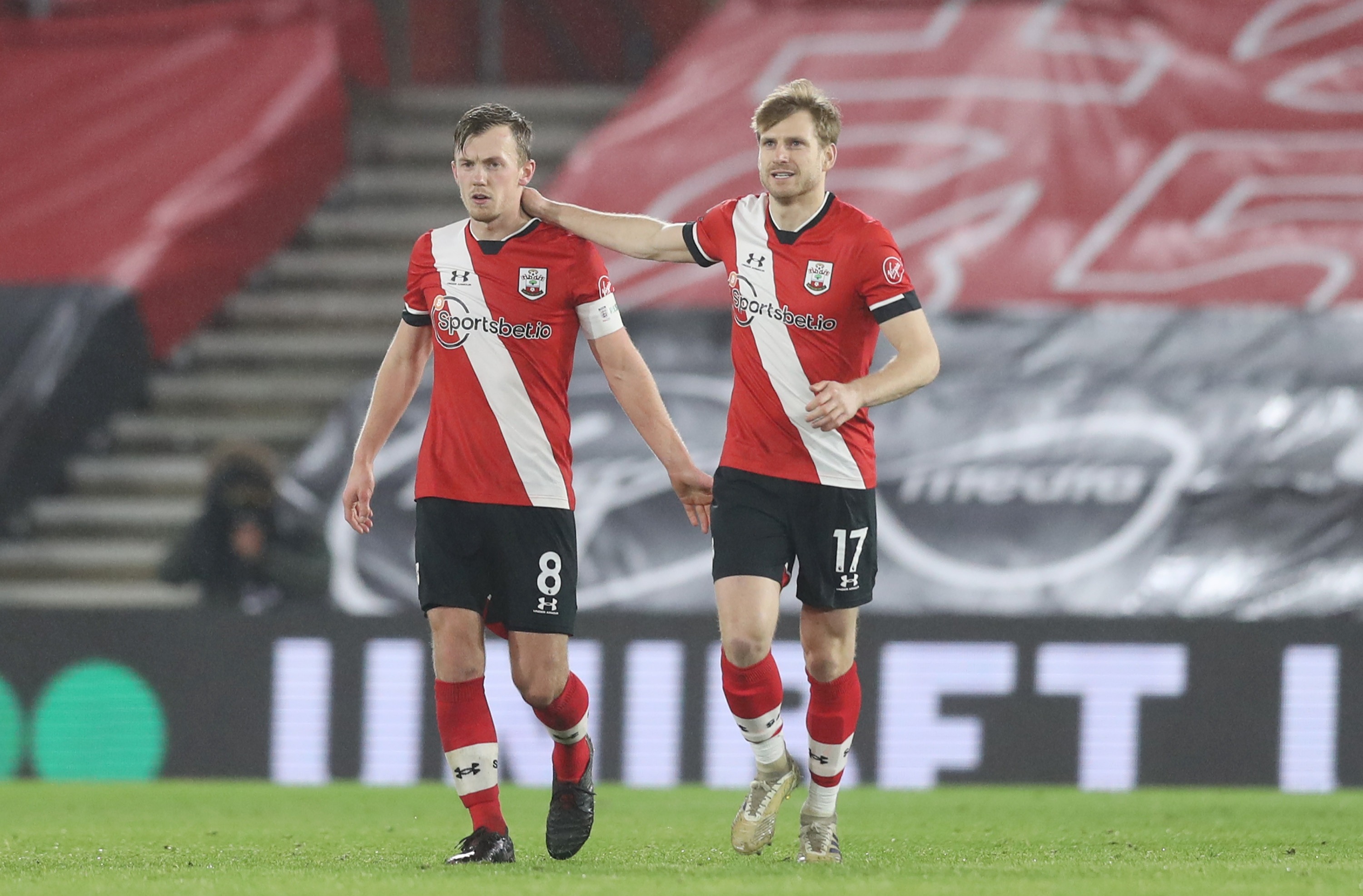 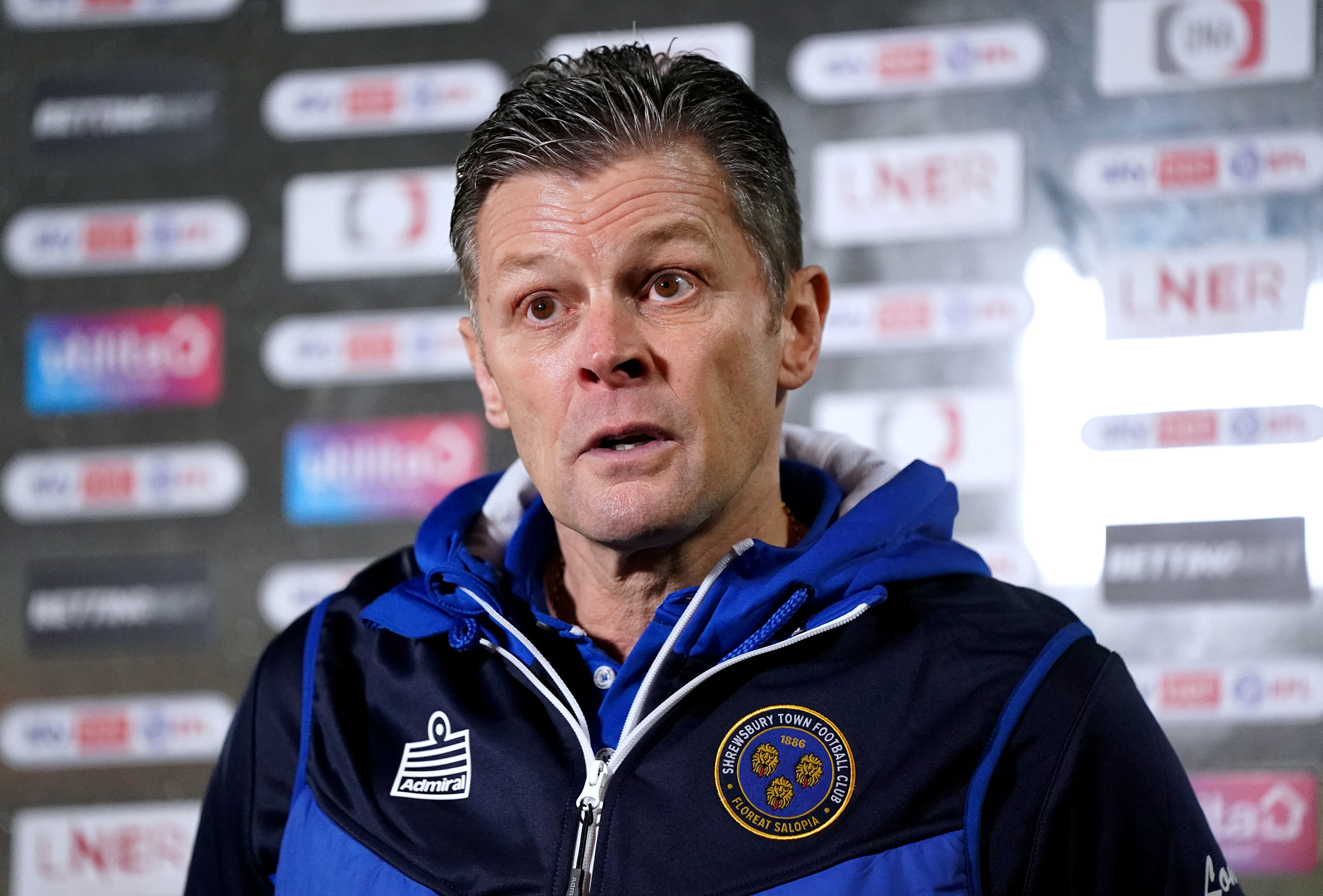 While N’Lundulu’s opener was his first professional goal.

Short-socked Aussie Watts, 19, was involved straight away, playing through a neat pass for Jake Vokins, who drew a solid stop from Matija Sarkic.

Shrews had a fair few efforts from long range in the first half without truly threatening Fraser Forster’s goal.

Harry Chapman came closest with a dipping effort from 22 yards but Forster was untroubled.

Hasenhuttl’s inexperienced side took the lead on 17 minutes.

Captain Ward-Prowse – one of four survivors from Saturday’s defeat to Leicester – sent a long ball forward which Watts tried to control inside the box.

The ball ended up at N’Lundulu’s feet and he kept cool to fire low into the corner. 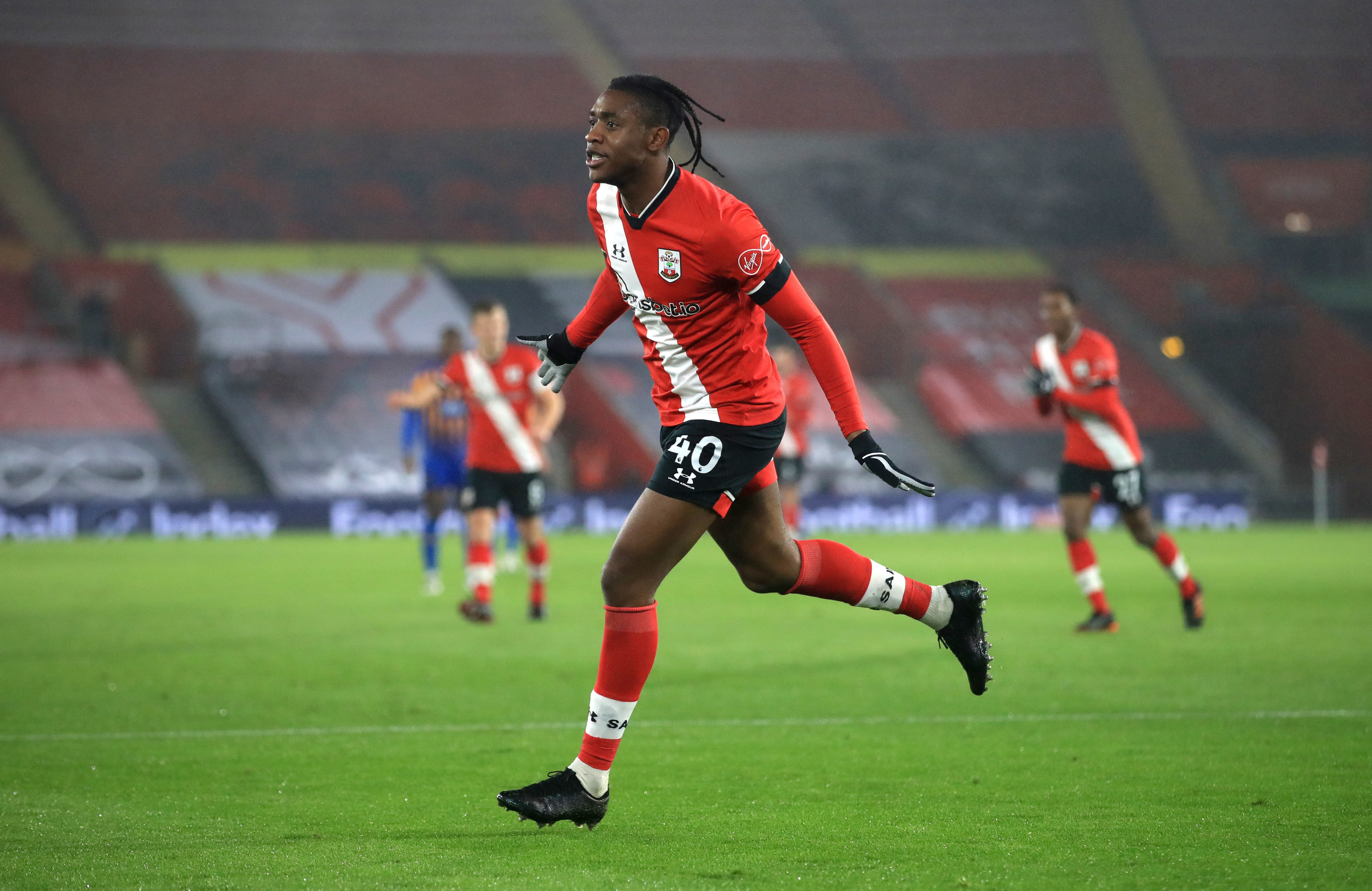 The strike was N’Lundulu’s first goal of the seasonCredit: PA:Press Association 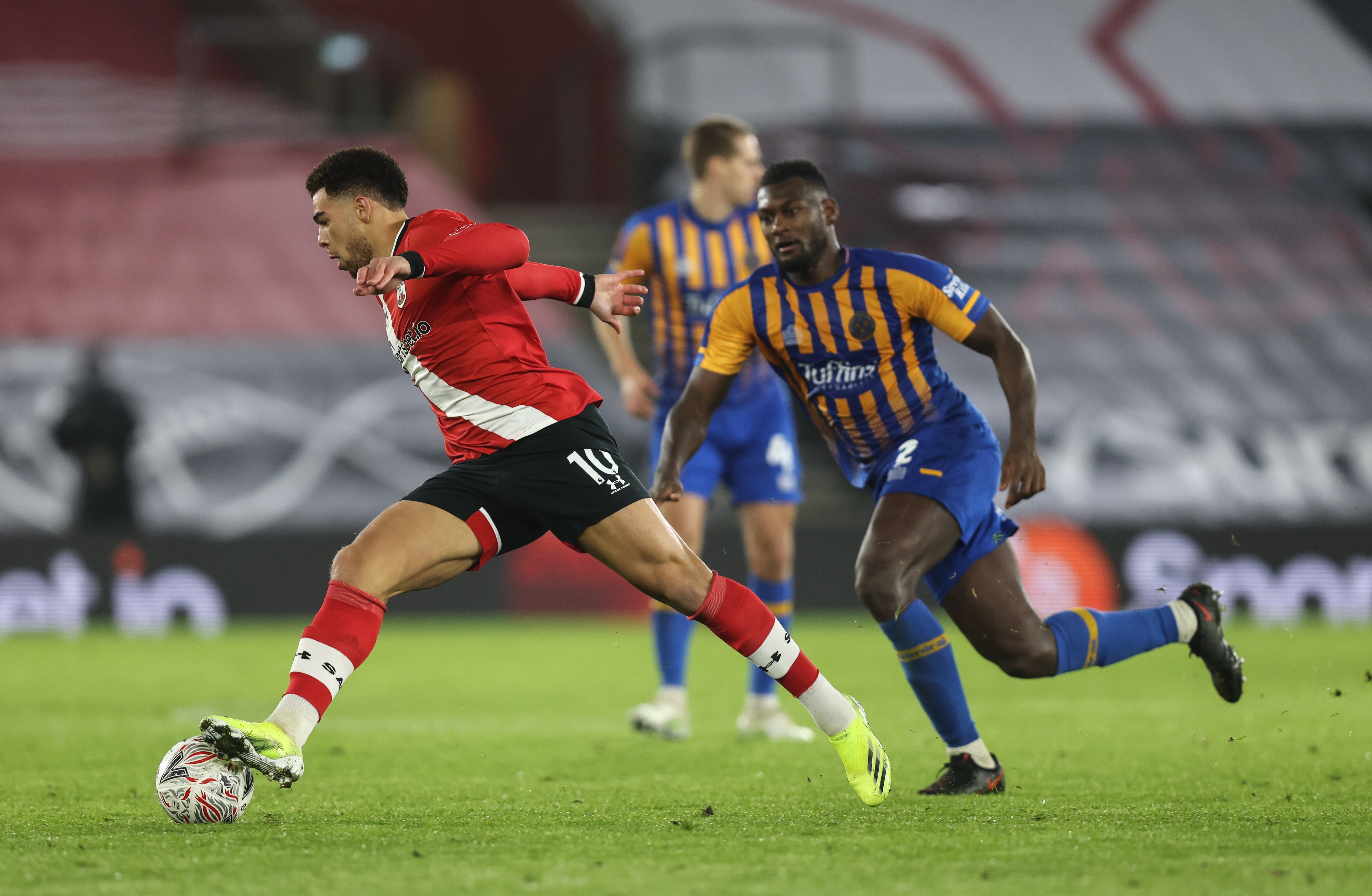 It capped off a fantastic start to 2021 for the 21-year-old, who came on as a sub for Danny Ings in the 1-0 win over Liverpool earlier this month.

Ings subsequently tested positive for Covid-19 and though his isolation period ended on Friday, the England man was not involved here.

Southampton are currently trying to convince Ings to sign a new deal, who currently has 18 months left on his current contract.

Yet right now it seems in the balance whether he will, with reports emerging last night that the ex-Liverpool striker is holding off because he is keen to return to a Champions League club.

Hasenhuttl said on Monday: “I hope we find an agreement and finally he stays with us. If not, then life will go on.”

Saints fans will be desperate to see that particular story have a happy ending from their perspective.

But at least here they could enjoy the career lift-off of one of their other hot prospects up front.

The hosts began to turn the screw after the break.

Pierre then flicked a header just wide, prompting Hasenhuttl to throw on the big guns in Che Adams and Stuart Armstrong.

Adams should have wrapped it up with three minutes to go when sent through by Vokins’ excellent pass, but was denied by another Pierre’ goalline block.

Ward-Prowse curled yet another set-piece in to confirm Saturday’s fourth-round tie at home to Arsenal.

Shrews will now turn their attention back to the league – and be hoping their ill gaffer is back in the dugout as soon as possible.