ONE Athletic Bilbao fan channelled his inner Jeff Hardy as he jumped off the top of traffic lights prior to his side’s appearance in the Copa del Rey final.

The supporter of the Basque club was being egged on to jump off like he was standing on the top rope in a WWE ring before Bilbao faced Real Sociedad. 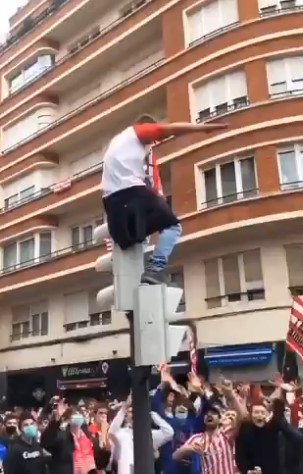 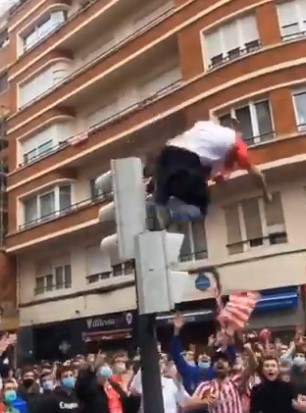 The supporter jumped off into the crowd surrounding him after being egged onCredit: Twitter

In a video obtained by El Chiringuito TV, the fan leaped off into the crowd surrounding him in the hope they would catch him.

But the group moved out of his way as he came crashing towards him as the man smashed into the road.

He quickly rose to his feet where he was mobbed by the jubilant, and presumably drunk supporters, as the gathering celebrated his stupid leap of faith.

Another remarked: “He is pretending to not look like a fool but it hurt.”

A third added: “I understand that with everything we have from the pandemic, we are all very fatigued and we want a bit of partying and revelry, but this is intolerable.”

Meanwhile one stated: “This is the same species that is capable of sending and landing ships on Mars, and of generating a vaccine in less than a year.”

Unfortunately for the man in question, his beloved Bilbao side lost in the delayed 2020 final as Sociedad edged out a 1-0 victory. 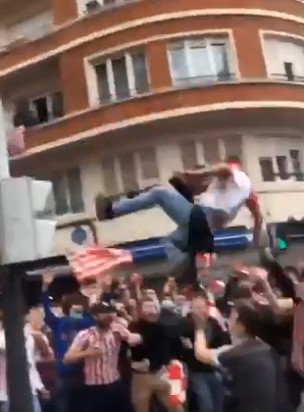 The Bilbao fan was in a joyous mood ahead of the delayed 2020 Copa del Rey finalCredit: Twitter 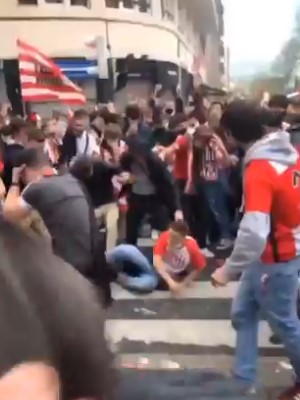 The fan smashed into the road after the group of supporters moved out of the wayCredit: Twitter

A second half penalty from Mikel Oyarzabal proved to be the difference in a tight affair in Seville where there was only three shots on target.

Bilbao – who have lost their last five Spanish Cup finals – will have the chance to win their first Copa del Rey since 1984 in two weeks.

Marcelino’s side have reached the 2021 final, where they will face LaLiga giants Barcelona on April 17.