THIRTY-FIVE major trophies between them, but these two wily old bosses cannot have faced many more topsy-turvy ties than this.

Jose Mourinho saw his Spurs stars go 1-0 up as they dominated the first 35 minutes – before conceding three goals before half-time. 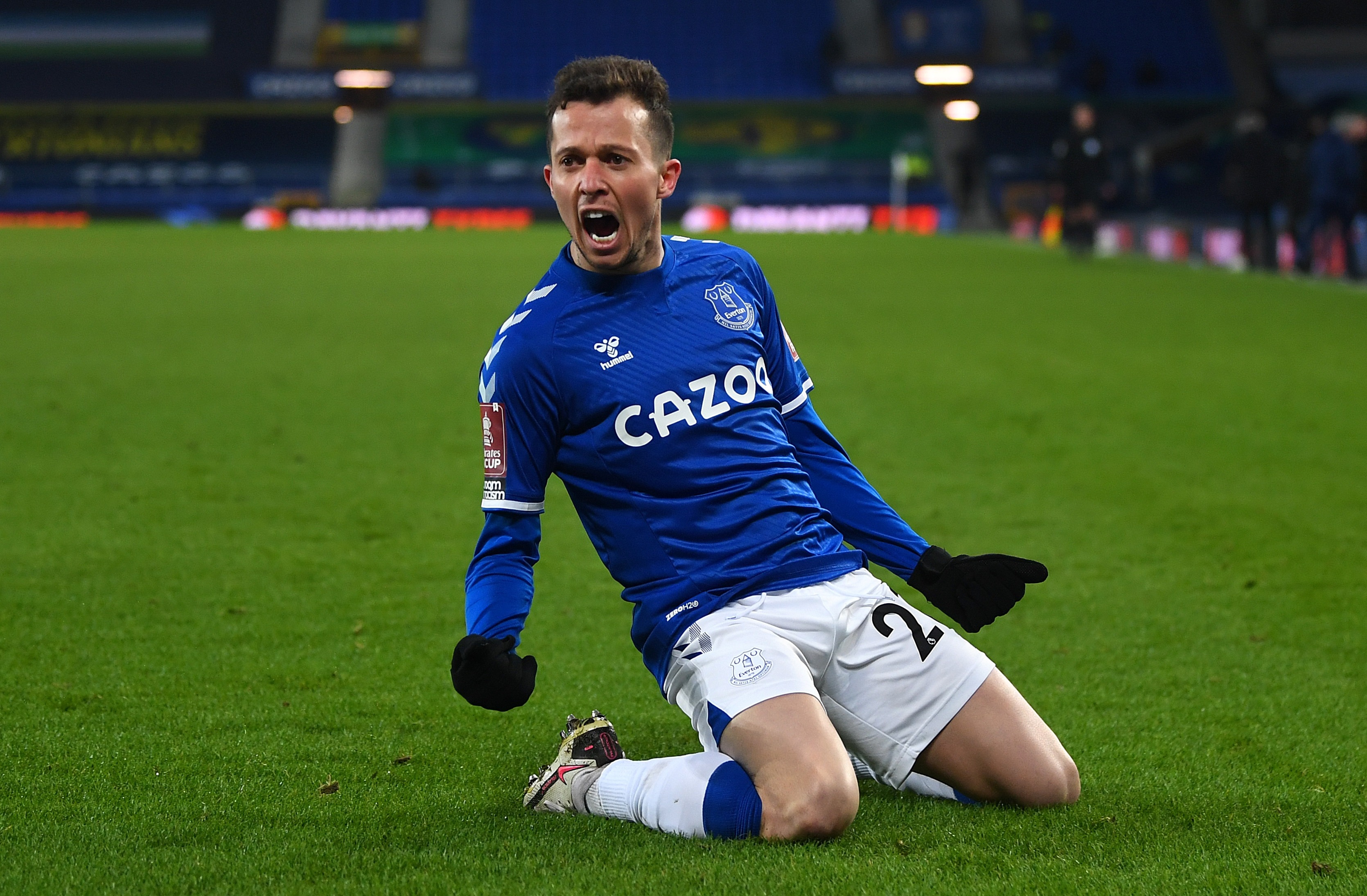 Bernard struck the ninth and final goal at Goodison to send his side through to the FA Cup quarter-finalsCredit: Getty Images – Getty 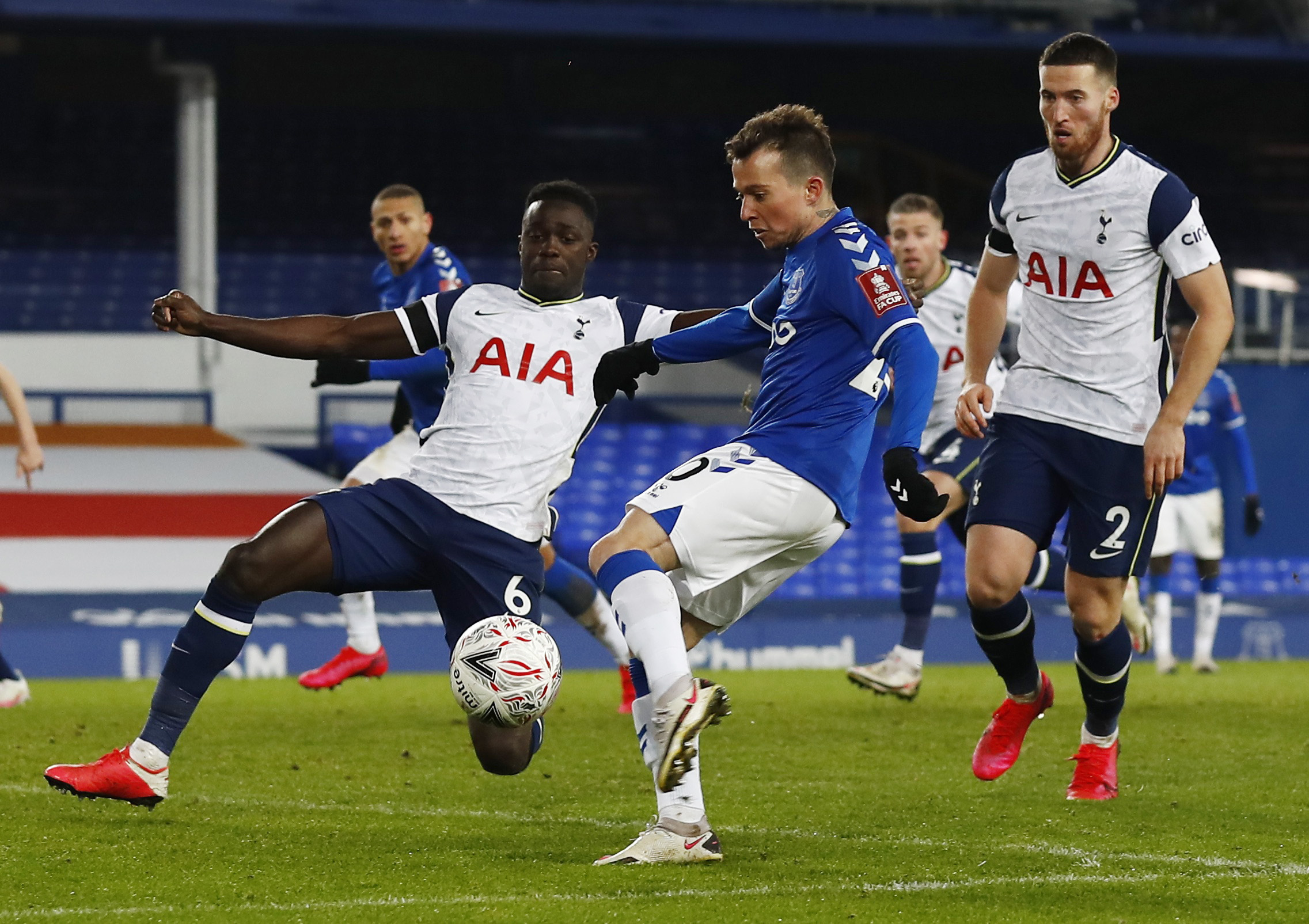 The winger came off the bench with 20 minutes left in normal time before lashing home the winner with 97 minutes on the clockCredit: Reuters

Then it was Carlo Ancelotti’s turn to watch his Everton side throw away a lead as the visitors pulled it back to 3-3 after the break.

But Richarlison thought he had fired the Toffees into the quarter-finals with his second of the night – before Harry Kane’s 84th minute diving header sent us into extra-time.

With echoes of Everton’s epic 1991 4-4 draw with Liverpool flowing through their fans’ minds, Bernard went one better by firing the Toffees into the quarter-finals with a 97th minute clincher.

Their Brazilian striker Richarlison could not solely claim the prize for being the night’s highest scoring South American as Davinson Sanchez – yes him – bagged a brace for Tottenham.

And we have not even mentioned Dominic Calvert-Lewin, who bagged his 50th Everton goal and played a part in all three of their first half goals before going off injured after the break.

And they say the FA Cup is boring and nobody gives a damn about it anymore.

Well, that was not the case at Goodison Park on Wednesday night. 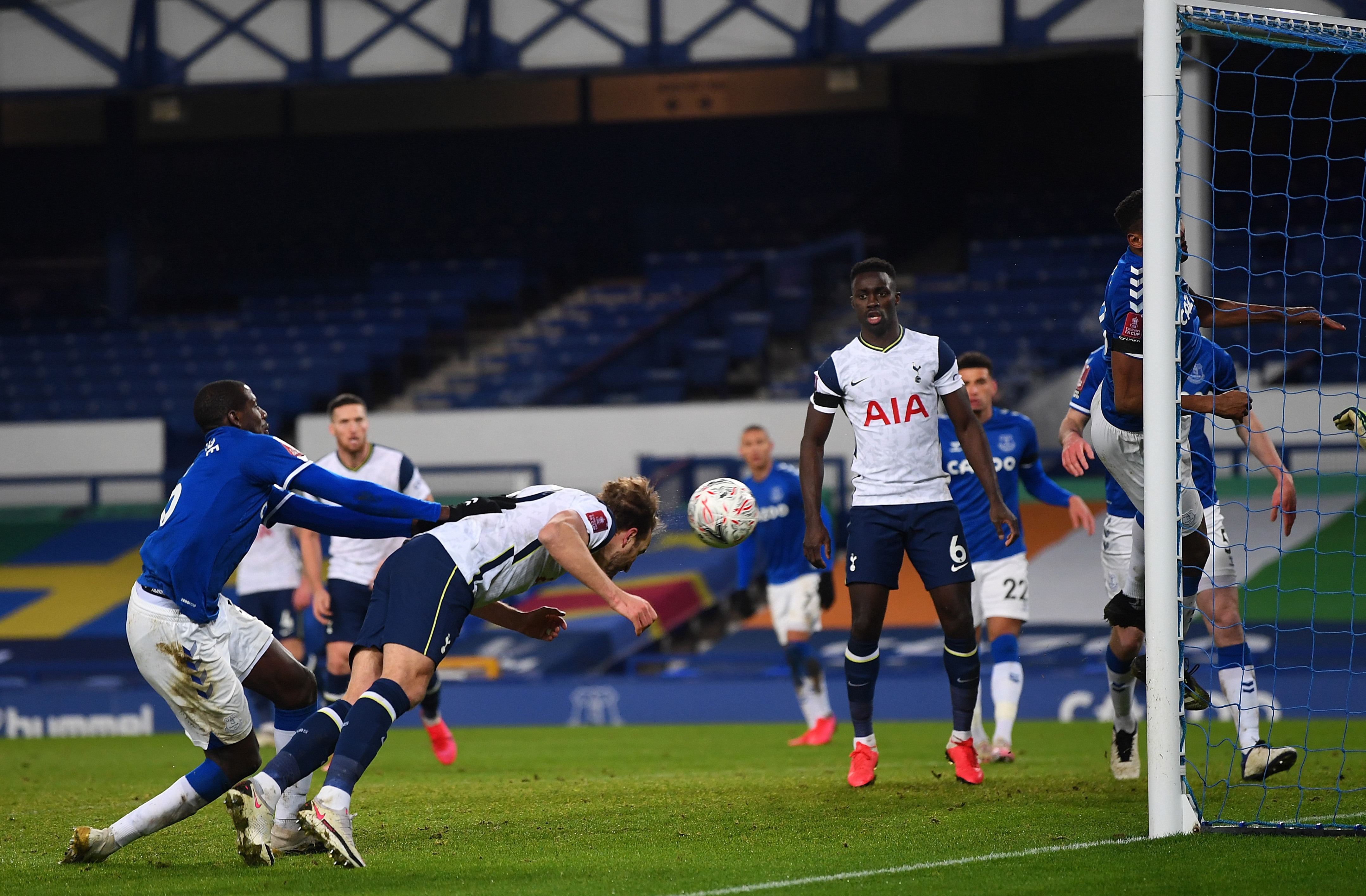 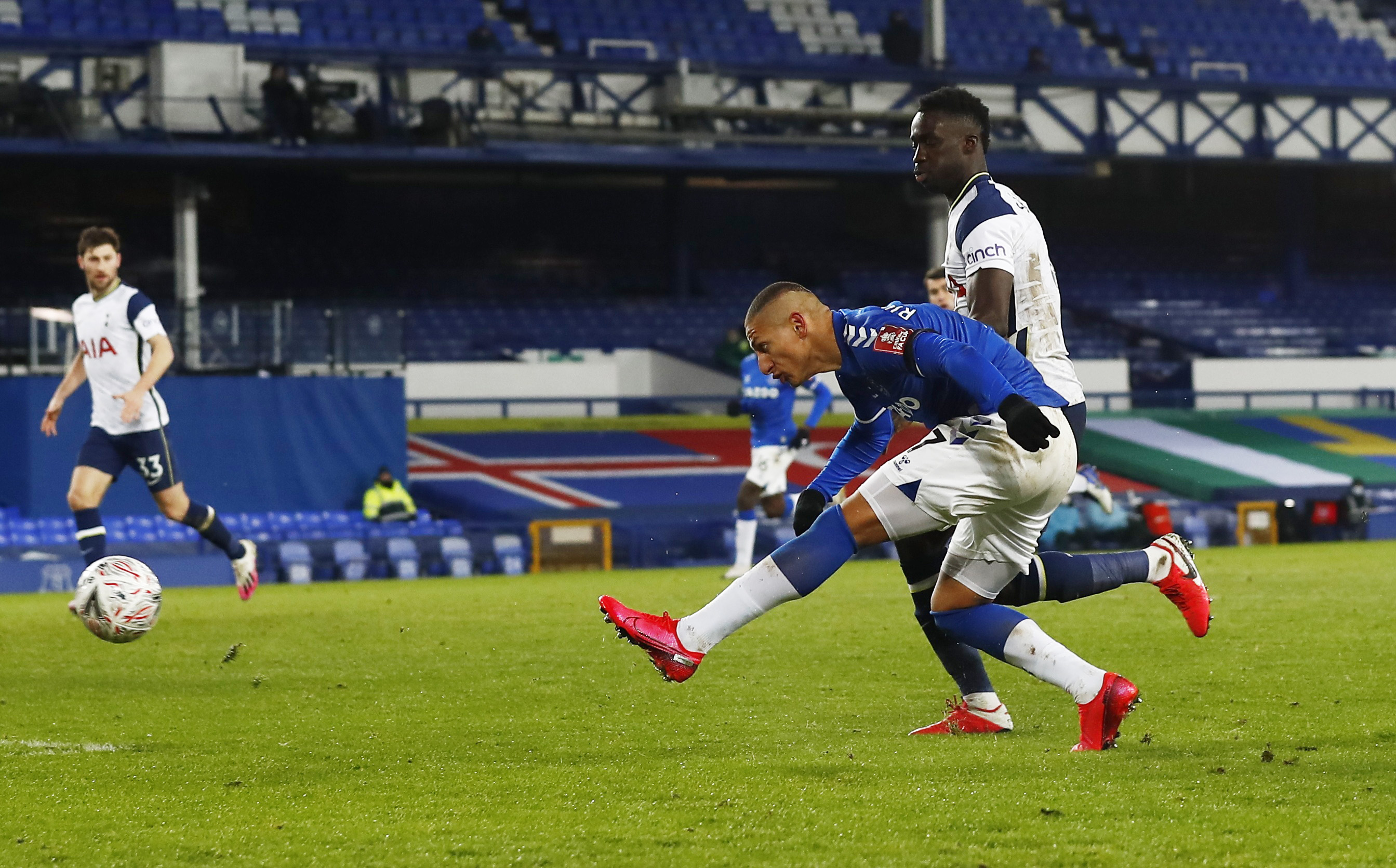 Richarlison’s second made it 4-3 to Everton with 22 minutes to goCredit: Reuters 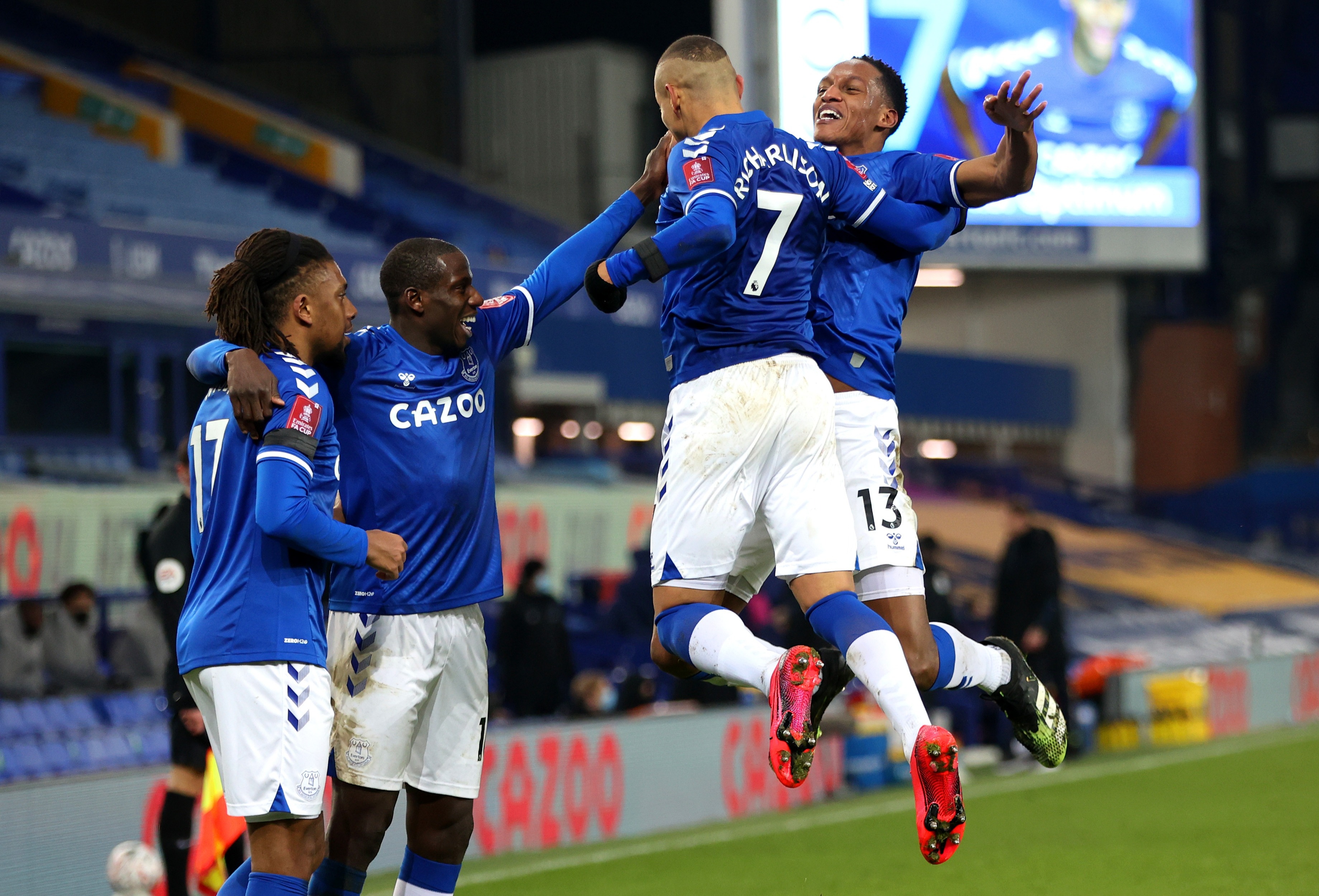 The forward thought he had won it in normal timeCredit: Getty Images – Getty 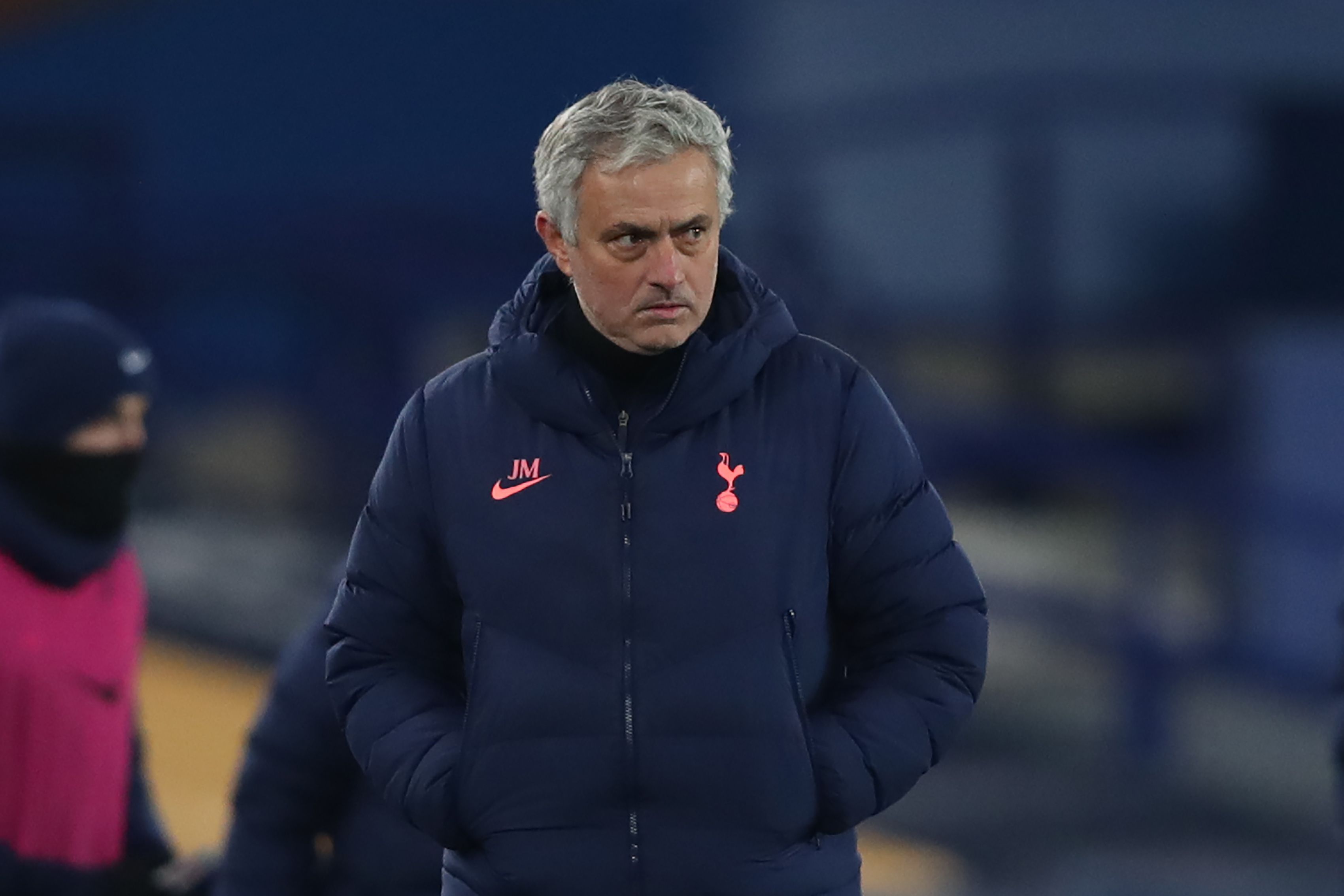 Jose Mourinho did not look happy with his team’s defending for the majority of the nightCredit: AFP

Mourinho and Ancelotti have been pals for years.

The Special One said before the game that whoever lost it would say to the other: “You have killed me so you’d better go on and win it now.”

Well each of these teams played as though their manager’s life depended on it.

Spurs came haring out of the traps and should have gone ahead inside 60 seconds when Erik Lamela’s header was brilliantly tipped away by Robin Olsen but Lucas Moura blazed the rebound wide and high of the target.

It was a bad miss by Moura, but Sanchez soon made amends as he outumped the Everton defence and headed in Son Heung-min’s corner to give Spurs a fourth minute lead.

The hosts, following their last-gasp 3-3 draw at Manchester United on Saturday, started sluggishly and after Spurs keeper Hugo Lloris had beaten away Ben Godfrey’s low 25-yard drive, the French captain was called into action again to touch Calvert-Lewin’s close range shot onto a post.

Spurs responded by advancing again, with Matt Doherty crossing into the box for Son, whose powerful rising shot was the right height for Olsen to turn over the bar. 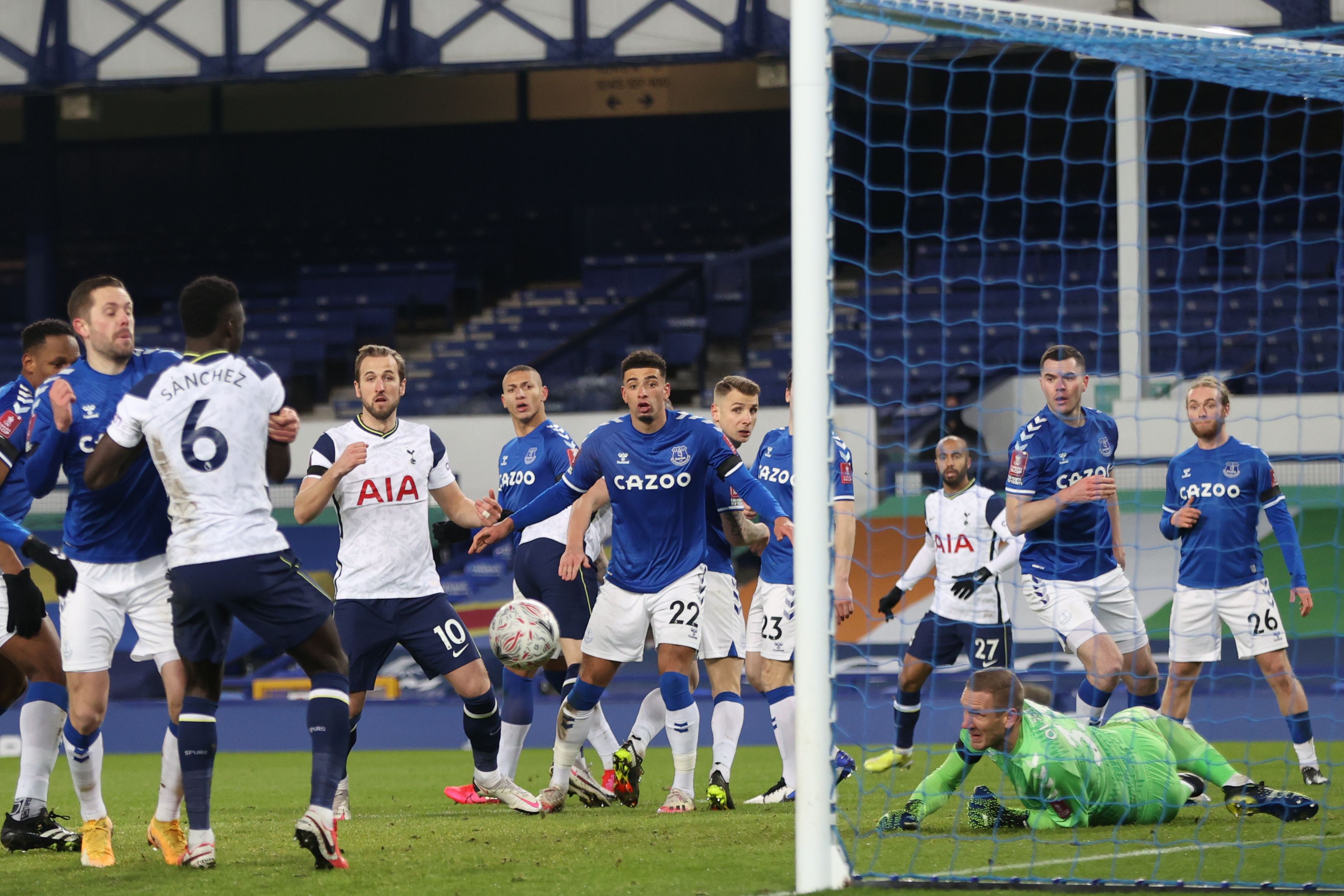 Davinson Sanchez scored his second when he stabbed home from close range to make it 3-3 on 57 minutesCredit: AFP 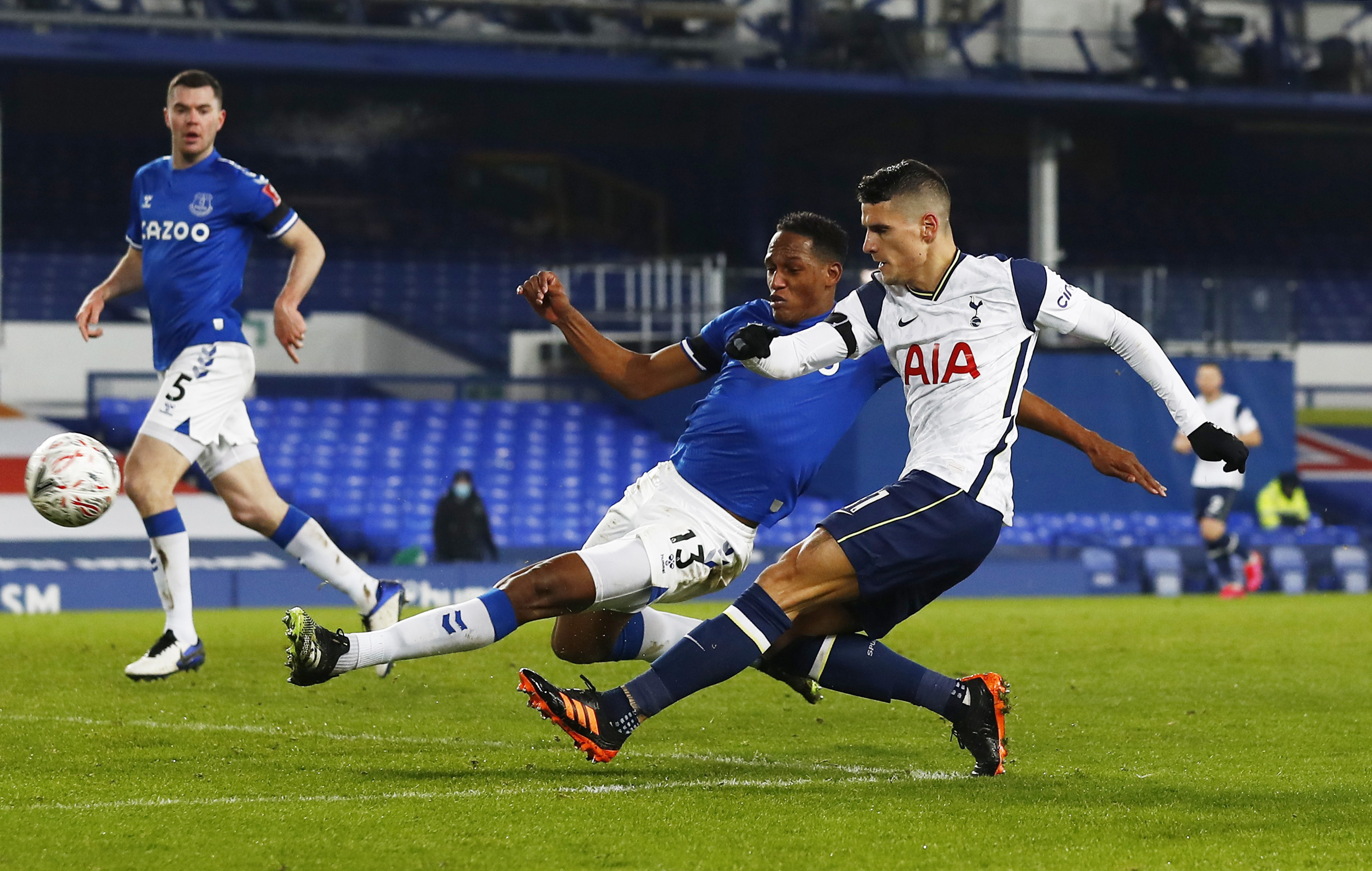 Erik Lamela scored the fifth goal of the first-half to make it 3-2 on the stroke of half-timeCredit: Reuters 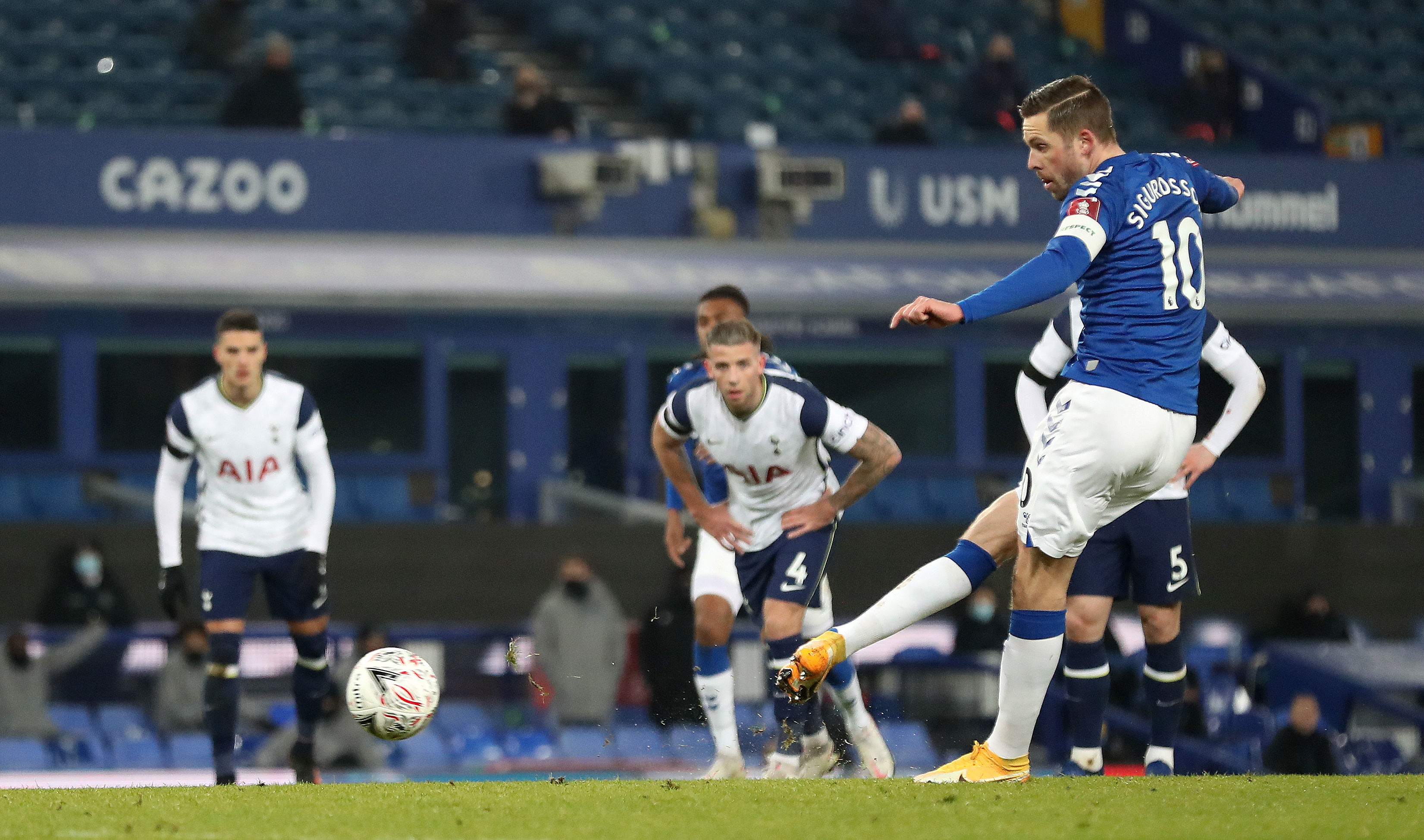 Gylfi Sigurdsson made it 3-1 from the penalty spotCredit: PA:Press Association 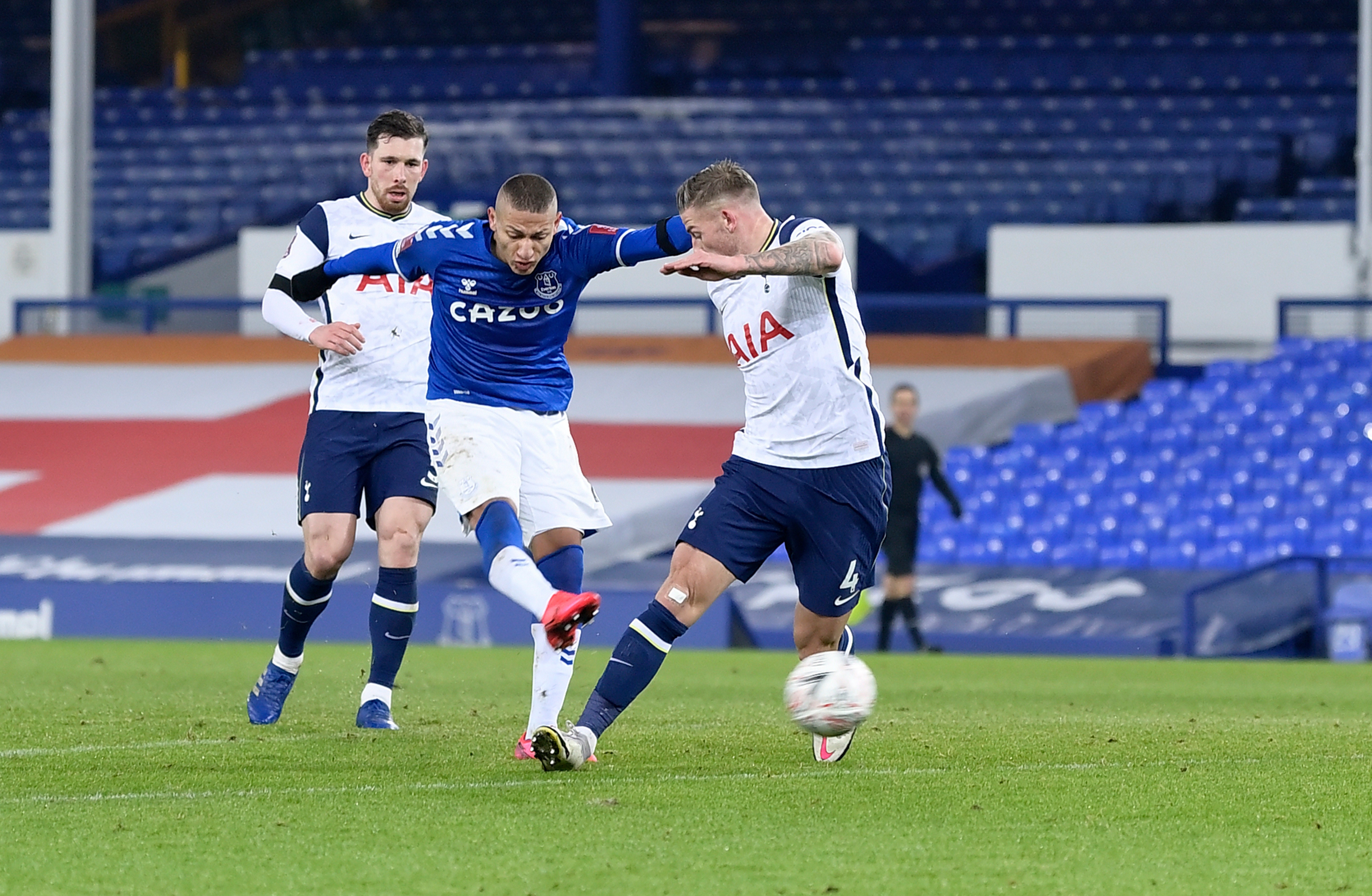 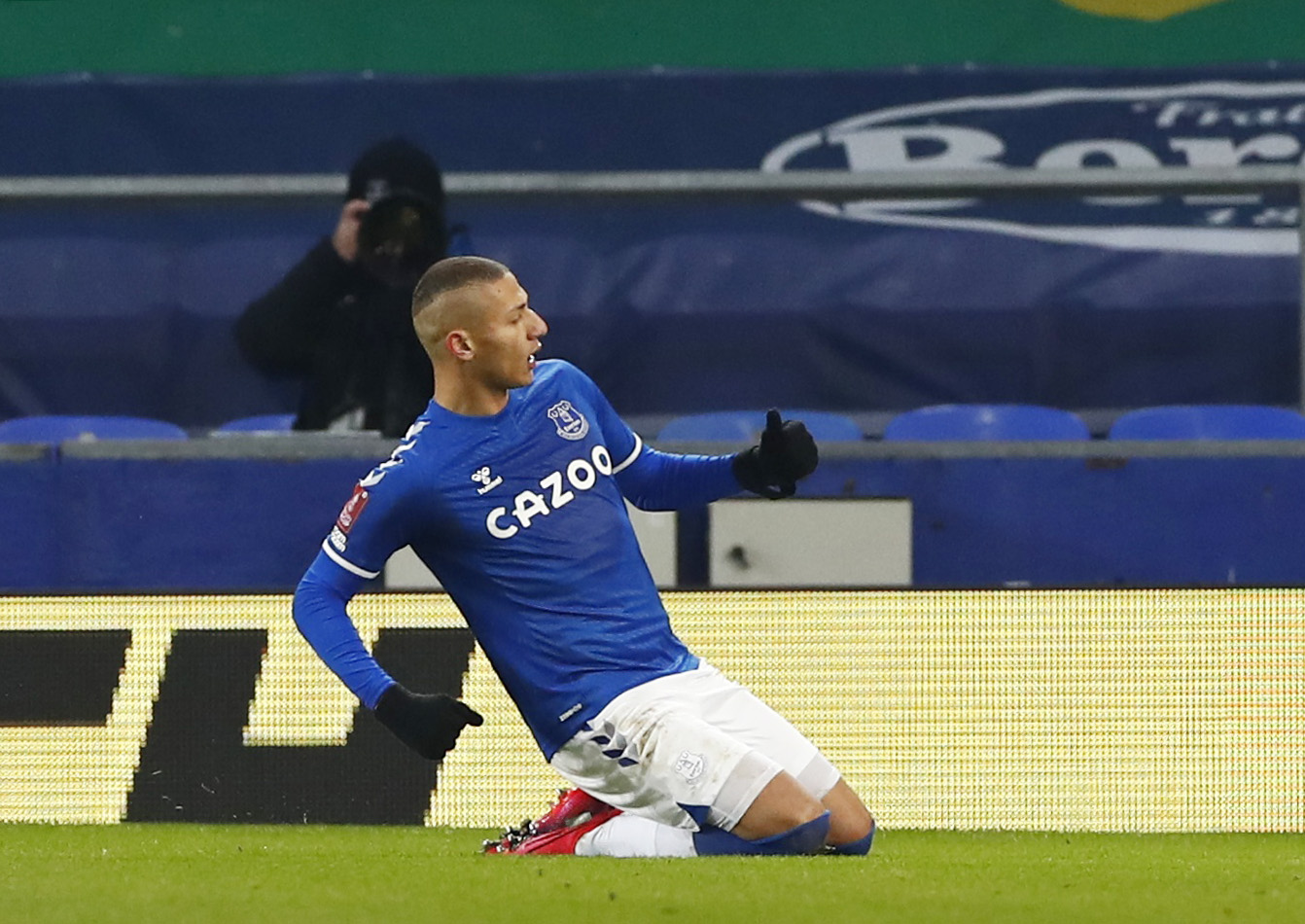 The Brazilian was delighted with his effortCredit: Reuters

The Swedish stopper was then in the right place again to collect Steven Bergwijn’s shot after Son’s effort had been deflected kindly into his path by Yerry Mina.

But just when it appeared Tottenham were in control they went and shot themselves in the foot by gifting Calvert-Lewin a 36th minute equaliser.

Spurs got themselves into a pickle trying to play out from the back and after Pierre-Emile Hojbjerg lost the ball, Gylfi Sigurdsson flicked it inside to Calvert-Lewin whose shot was so vicious Lloris could not keep it out.

The frontman then showed he is not just about goals as his clever back-heel lay-off allowed Richarlison to drill in Everton’s second from edge of the box two minutes later to turn this tie on its head.

And Calvert-Lewin made Tottenham’s first-half misery complete when his burst into the box was ended by Hojbjerg’s trip and Sigurdsson slotted home the 43rd minute penalty to make it 3-1.

But the visitors were given heart when Mina’s slip let in Lamela, who pulled one back with a neat finish in first-half stoppage time.

Furious Mourinho sent his side back out early after the break. He then sent on Kane for Bergwijn in the 53rd minute in a bid to get Spurs back into the game.

Seconds later Calvert-Lewin hobbled off after picking up a knock – Everton’s hopes appeared to go down the tunnel with him when Sanchez tapped home a 57th minute equaliser after Olsen had managed to get a hand to a Toby Alderweireld header from Son’s corner. 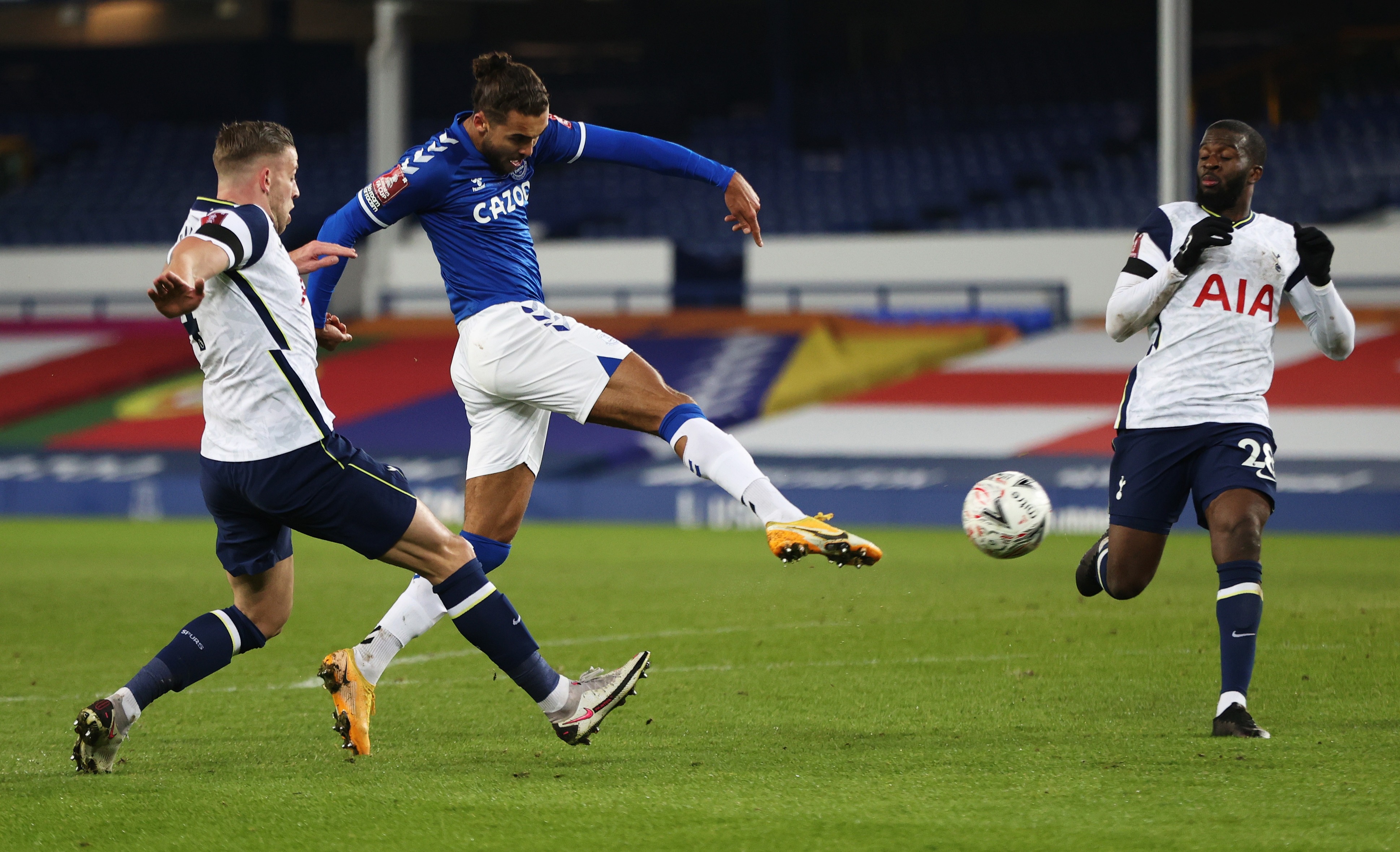 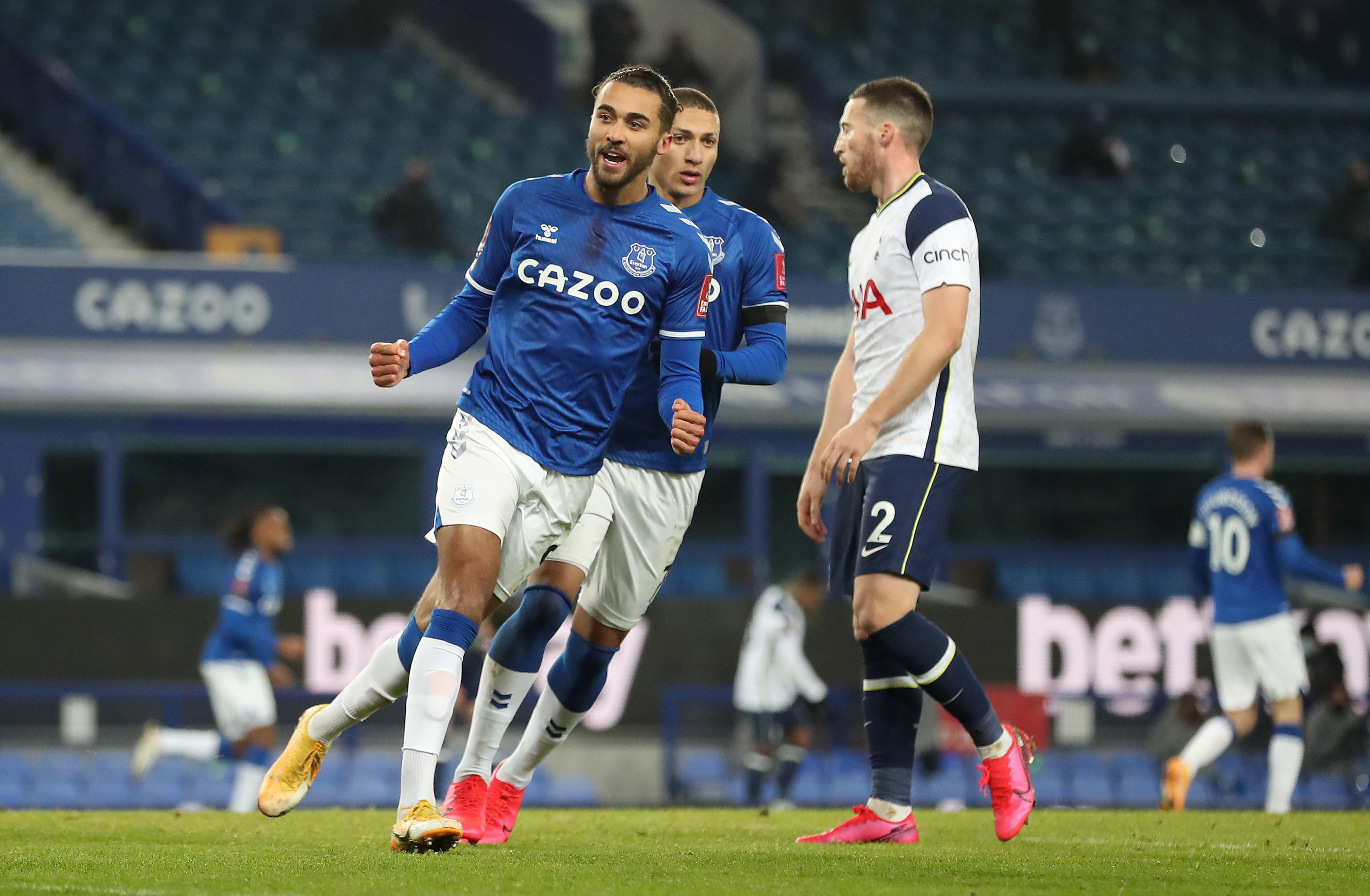 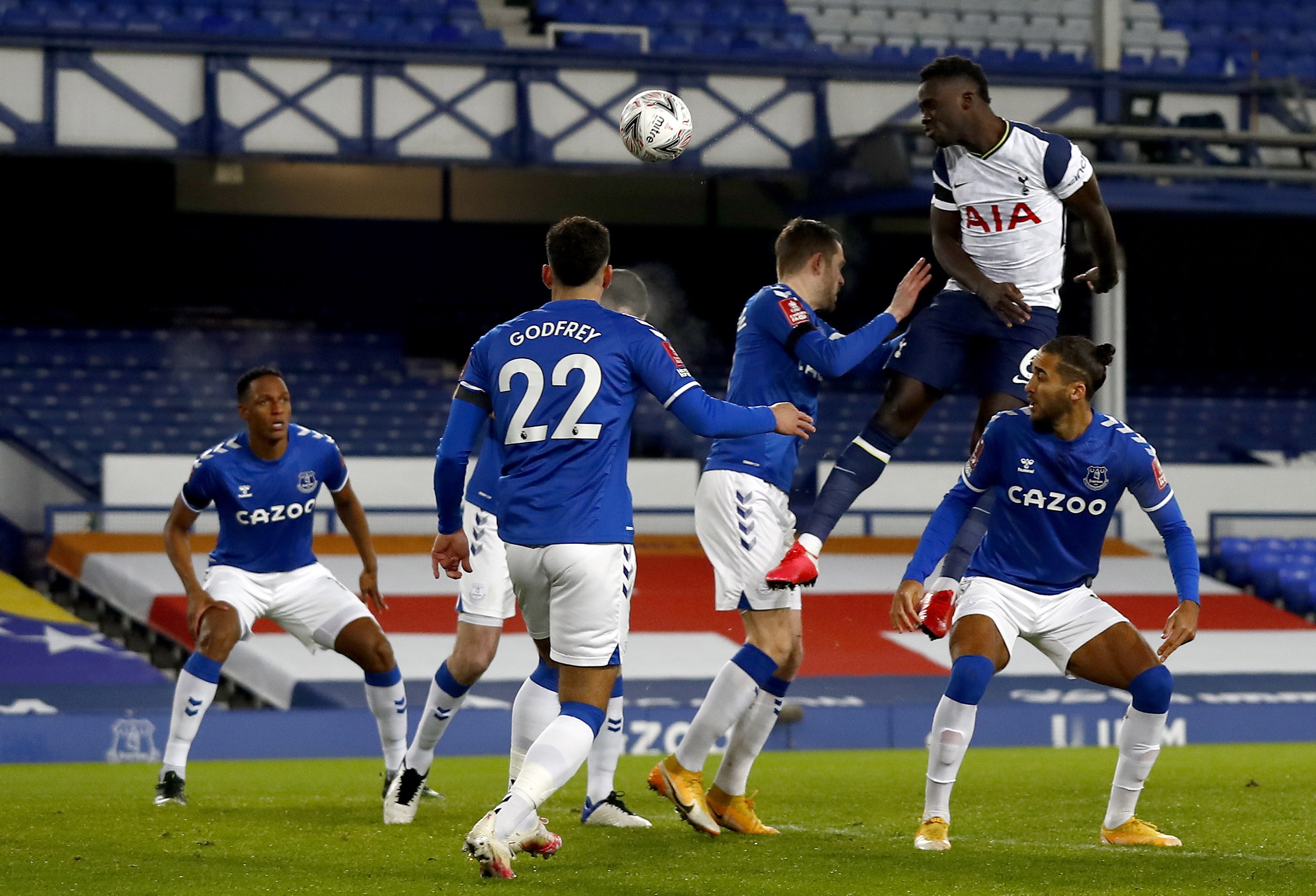 Sanchez’s header put Tottenham 1-0 up in the third minuteCredit: EPA 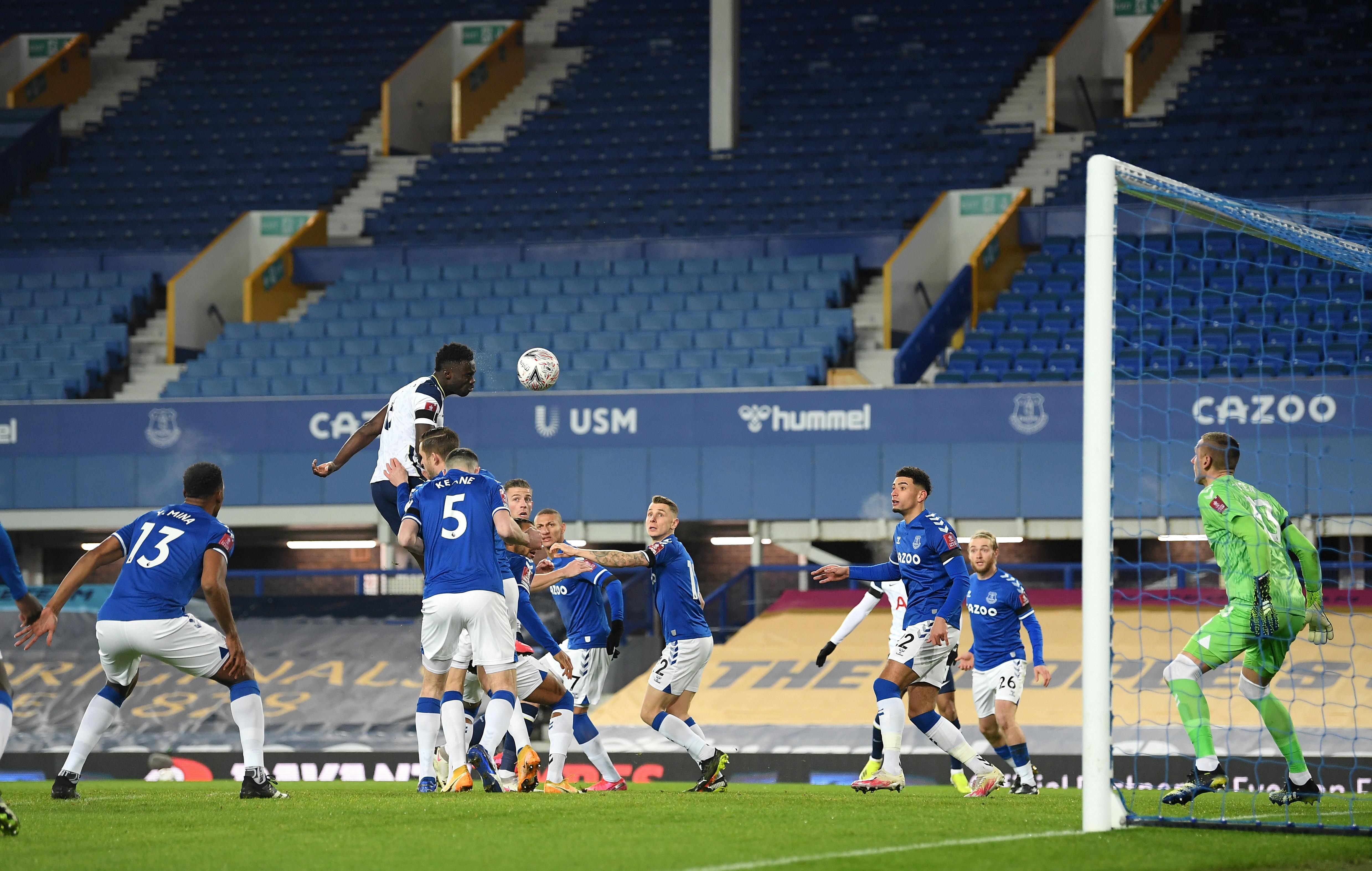 The centre-back leaped above everyone to glance the ball homeCredit: Getty Images – Getty 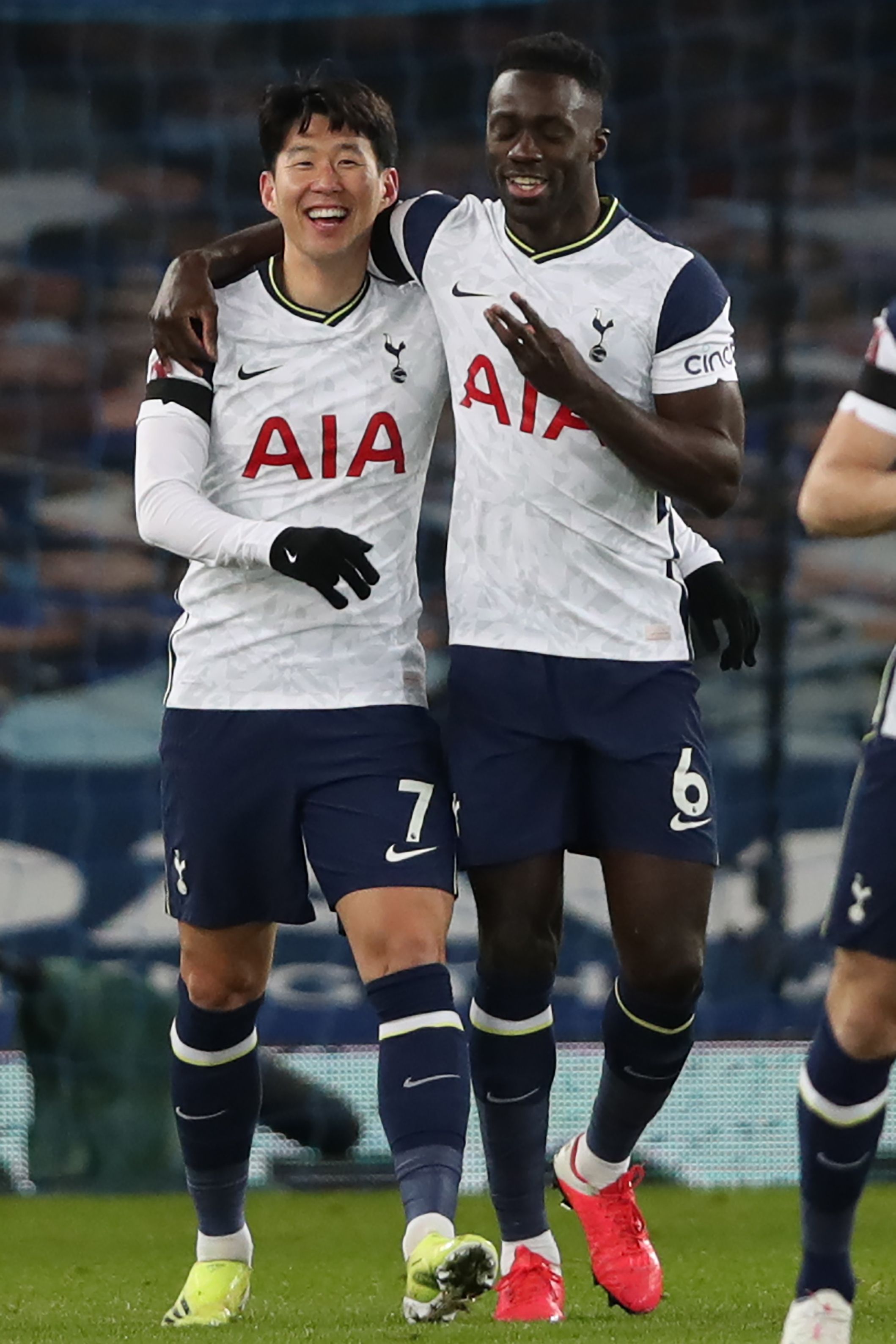 But the lead did not last longCredit: AFP

But Richarlison restored Everton’s lead in the 69th minute with a shot across Lloris – who could have possibly done better with this effort, not to mention a couple of the others.

Spurs rallied and Lamela had a shot cleared off the line before Kane dived to head in Son’s cross at the far post with six minutes remaining.

Mourinho sent on Dele Alli – but all the midfielder finished the 90 minutes with was a yellow card.

Mourinho’s night worsened considerably when Bernard, on as a second-half sub for Alex Iwobi, swept his shot past Lloris for Everton’s extra-time winner.

It resulted in Ancelotti on the touchline blowing into his steaming hot coffee.

No grounds for concern – he now has a bigger cup to worry about. 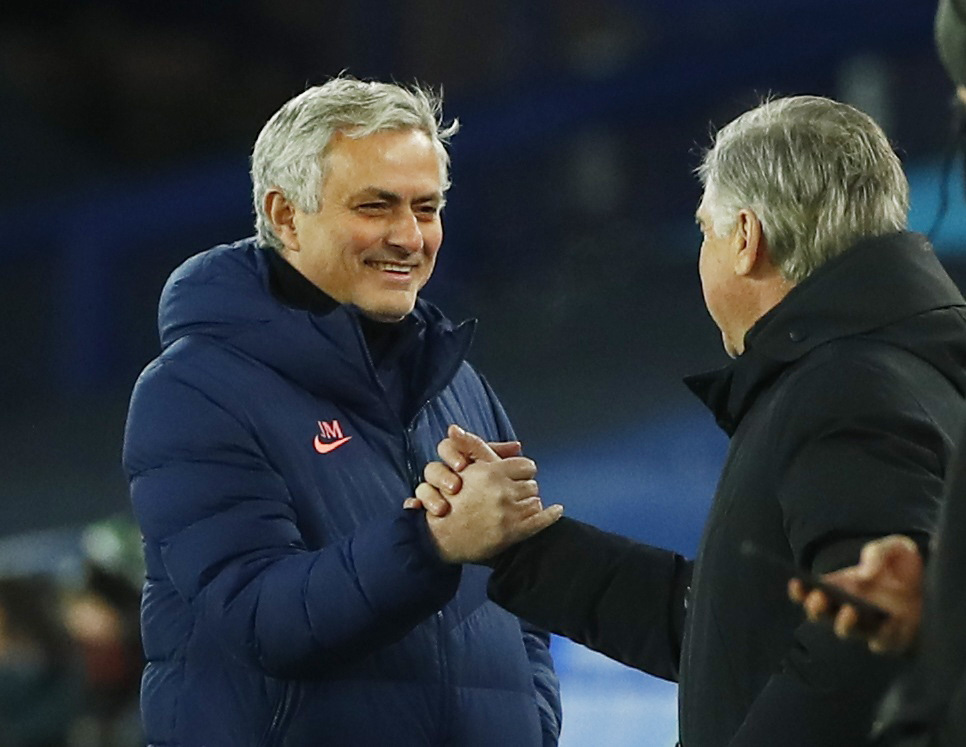 Jose Mourinho and Carlo Ancelotti were full of praise for each other before the gameCredit: Reuters

Paedophile, 52, giggled after raping friend in hotel bed as she slept