Barcelona ripped Arsenal apart in style to kick-start their Champions League defence. Goals from Mariona Caldentey, Asisat Oshoala, Lieke Martens and newly crowned European player of the year Alexia Putellas, who received her trophy before kick-off, gave the home team a comfortable lead, while Frida Maanum pulled one back from a corner. The scoreline, terrifyingly, flattered the Gunners, who had six shots while their opponents had more than 30 and Arsenal barely registered time on the ball.

“I’ve learned that we have a team that never gives up,” said the deflated Arsenal manager, Jonas Eidevall. “It was a really really tough game. I can probably do things better in preparing the team to find those solutions even quicker than they did today.”

In the first half Arsenal were forced to ride wave after fluid wave of Barcelona attack and it was somewhat surprising that they clung on for half an hour. Within minutes of the whistle the reigning European champions fizzed around the Arsenal box, pinning back the Women’s Super League leaders with the shadow of the famous La Masia academy looming over the stadium.

On approach to the Estadi Johan Cruyff, the 6,000-seat stadium opened in 2019, a quote by the Dutch master adorns a wall: “In my teams, the goalkeeper is the first striker and the striker the first defender.” This Barcelona team were doing their best to make those words come true. Goalkeeper Sandra Paños spent much of the first 45 minutes closer to the halfway line than her goalline as the strikers drove forward, forcing save after save from Manuela Zinsberger and simply denying the Gunners any time on the ball.

Given her heroics, which included a late penalty save from Putellas, it was cruel then that Zinsberger would be let down by her defence for the opener. Having firmly parried Oshoala’s effort from the edge of the area it was Caldentey who pounced on the rebound and fired in without a yellow Arsenal shirt in sight.

They doubled their advantage two minutes before the end of the half. Oshoala, who spent a season with the Gunners in 2016-17, was played in behind the Arsenal defence on the right. The Nigerian forward cut back to Putellas who smashed in from six yards between Leah Williamson and Zinsberger.

Eidevall had brushed aside warnings of the strength of the team that had scored 35 goals in their first five Superliga games and conceded just once prior to the game when he said: “It’s a very good football team, but they are also beatable. It’s 11 humans against 11 humans tomorrow. In Sweden, we say ‘a shovel is a shovel’. A football game is a football game.”

The problem though was that Barcelona looked superhuman, a shovel digging a hole that the Gunners were desperately trying to fill back in with bare hands.

If there was hope of respite in the second half there was almost none, Barcelona, who dismantled Chelsea 4-0 in last season’s Champions League final, had come back out with a digger. Within two minutes the team had its third and it was disappointingly easy from an Arsenal point of view as Oshoala latched on to a low ball in behind, easily outpacing Jen Beattie, before calmly slotting past Zinsberger.

Parris and Heath, in particular, inserted some much-needed energy into a non-existent attack and Heath’s free-kick was bundled over the line by Maanum to reduce the deficit. Martens would re-establish it shortly after though, racing clear and chipping Zinsberger not long after entering the fray.

“What makes them a really good team is that they can do basically three different things,” said Eidevall. “They have really, really good players on the wings that can do one-v-ones, like Caroline Graham Hansen, and really good players in the midfield that can make central breakthroughs, like Alexia Putellas, and really fast players like Oshoala who can hit you with runs in behind. Usually you play teams that maybe can’t hurt you in that many ways.” 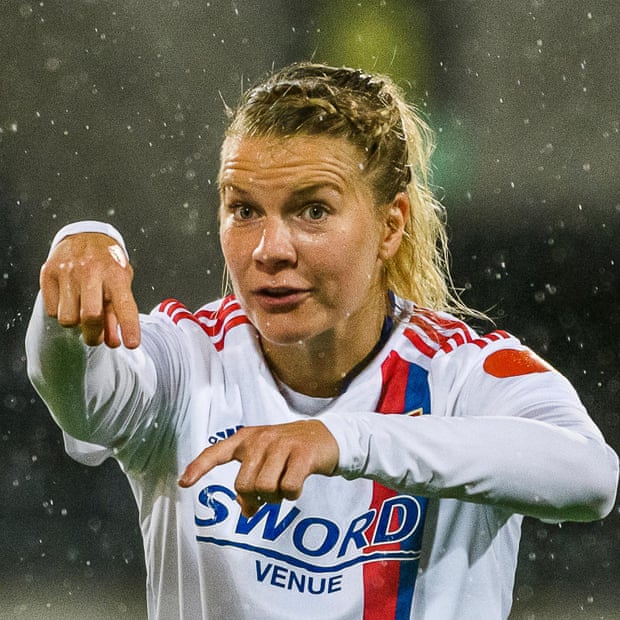 Ada Hegerberg made her first appearance in 21 months as Lyon began their Group D campaign with a 3-0 win over Häcken in Sweden. Melvine Malard fired the visitors in front from Daniëlle van de Donk’s cross after 10 minutes, before Catarina Macario’s volley and a Stine Larsen own goal made the game safe early in the second half. Hegerberg [pictured] came off the bench late on for her first minutes since suffering a cruciate ligament injury in January 2020.

In the group’s other game, Benfica held Bayern Munich to a goalless draw in Portugal. In Group C, Hoffenheim produced a dominant display to beat Danish side HB Køge 5-0. Katharina Naschenweng put the hosts in front before a second-half flurry of goals, with defender Tine De Caigny on target twice. Hoffenheim travel to Meadow Park to face Arsenal in their second match, on 14 October.

There is no shame in being beaten by the best. Both sides have new managers but with Jonatan Giráldez Costas stepping up from assistant coach, after Lluís Cortés left in the summer, change at Barcelona has been minimal and they are much further along in their current team cycle than Eidevall’s Arsenal.

If anything Arsenal can be grateful that the new format in the Champions League allows them to test themselves against Europe’s top team in a group stage where progression to the quarter finals is still possible with a second-place finish.

What is scary is that Barcelona areonly going to get better too. “There is a long season ahead of us. The aim of the team is to get all the titles, win what we did last year, the intention is to repeat it,” said Caldentey.